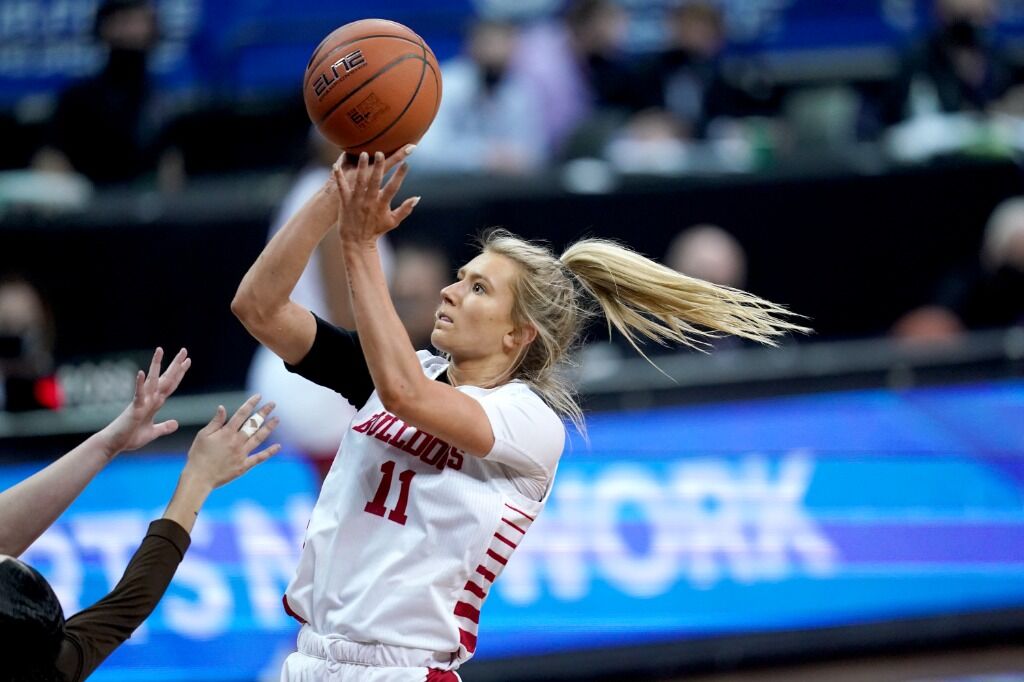 Maddi Utti puts up a shot in her last game of the conference tournament. 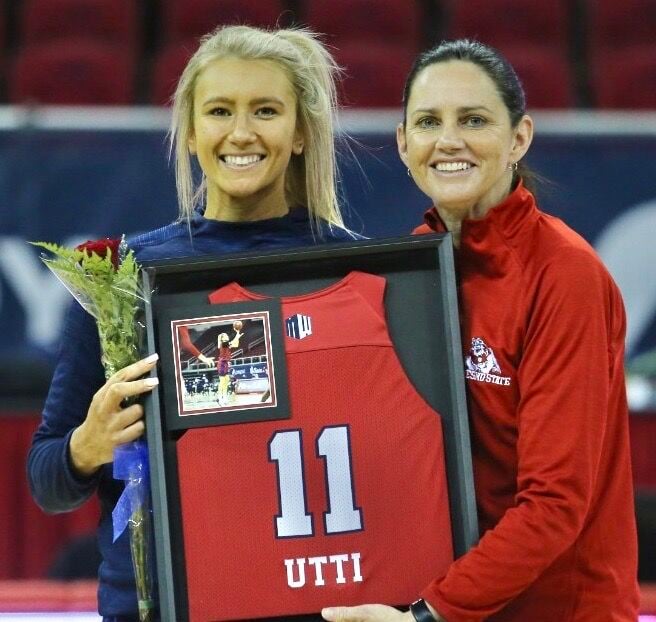 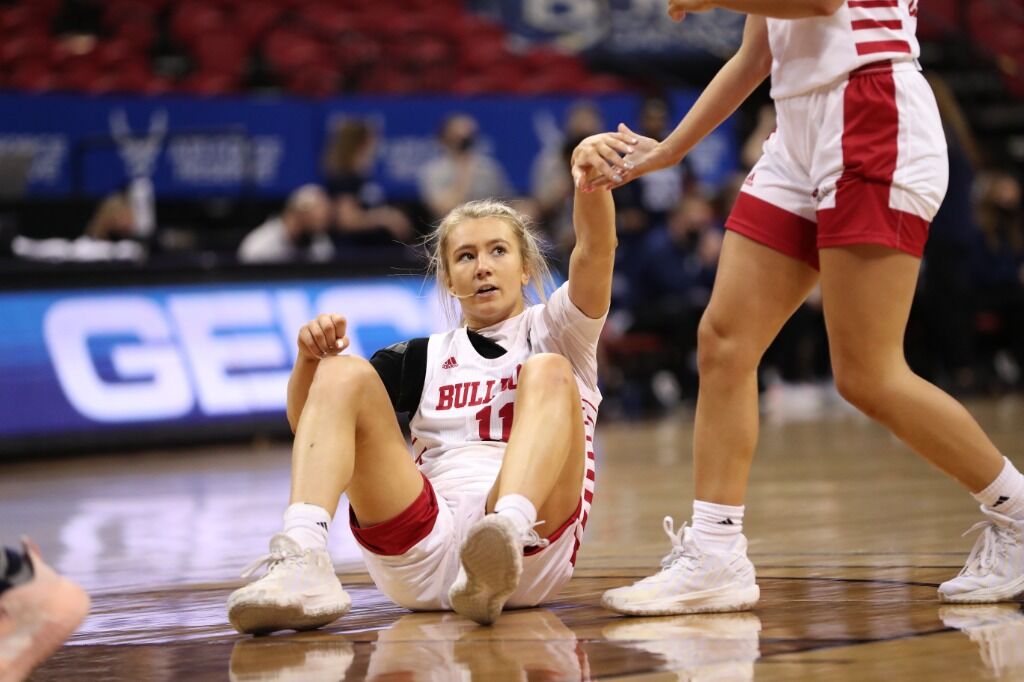 Utti had to bounce back several times in a very tough senior season at Fresno State. 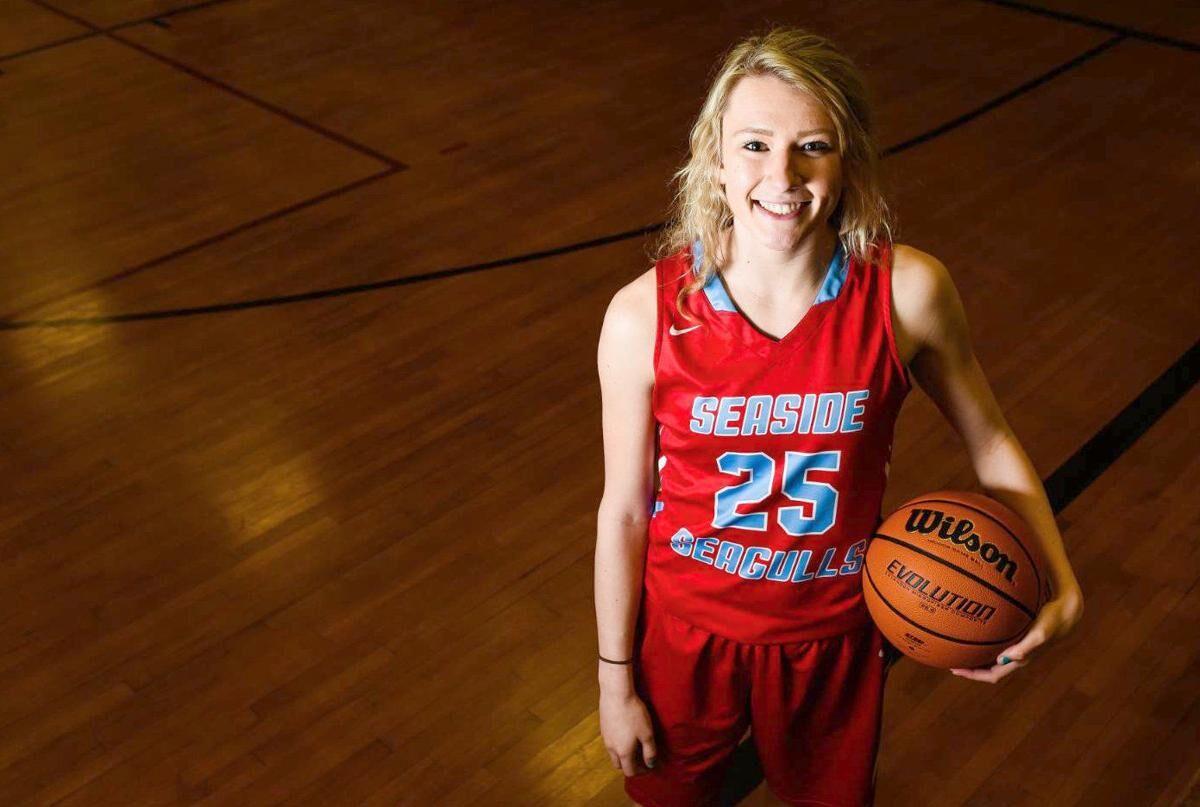 Maddi Utti, in her days as a Seaside Seagull. 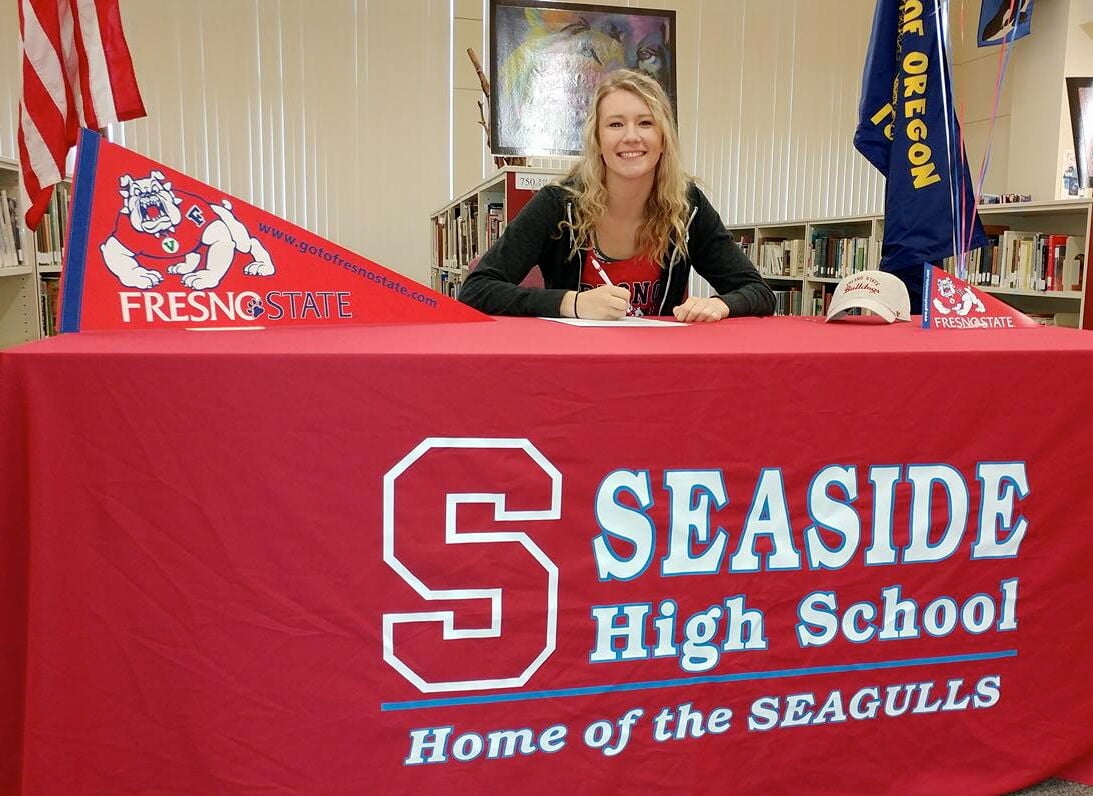 On signing day at Seaside High School, Utti signs a letter of intent to play at Fresno State.

Maddi Utti puts up a shot in her last game of the conference tournament.

Utti had to bounce back several times in a very tough senior season at Fresno State.

Maddi Utti, in her days as a Seaside Seagull.

On signing day at Seaside High School, Utti signs a letter of intent to play at Fresno State.

If there’s one thing Seaside basketball fans know about Maddi Utti: No matter who the opponent, what the score is or whatever physical ailment she might be dealing with, the hard-working forward with the golden touch always gave it everything she had, for four full quarters.

The game took her from a fifth-place finish at state as a freshman in 2014 and third-place as a senior in 2017, to an outstanding Division I basketball career at Fresno State, highlighted by a conference Player of the Year award in 2020.

Unfortunately for Utti and the Bulldogs, Fresno State came up one win short of the NCAA Tournament for the second straight season this year, following a loss last week to Wyoming in the Mountain West Conference championship game.

Fresno State — which entered the conference tournament as the No. 4 seed — got past No. 1 New Mexico the night before, but lost a nail-biter to the Cowgirls in the final, 59-56.

Fittingly, Utti was the only player for either team to play the entire 40 minutes, finishing with a game-high nine rebounds and seven points.

The night before, in a 77-72 victory over New Mexico, Utti contributed 17 points and 12 rebounds.

The Bulldogs lost six conference games in the regular season, but the last four losses came by just a combined seven points. And last Wednesday’s defeat fell into the same category.

Four days before the conference tournament began, Utti talked about the close losses.

“There’s been a lot of close games, we just haven’t been able to finish them out,” Utti said. “We know we should have won those games, which would have made us conference champions. That’s pretty disappointing, but going into the tournament we know that we’re able to win those games.”

Win them they did. The first two nights, Fresno State beat Nevada (70-46), then New Mexico.

The loss to Wyoming was a heartbreaker for the Bulldogs, especially for Utti and her four senior teammates.

Arguably the greatest girls basketball player in Clatsop County history, Utti’s college basketball career may or may not be over — that decision will come later.

For now, Utti’s latest season came to a close in an empty arena, 1,100 miles from home.

There were no fans allowed at the tournament, held at Thomas & Mack Center in Las Vegas — something Utti was finally getting accustomed to.

“It’s definitely weird” not having fans in the arena, she said. “They would have the crowd noise, the audio, but there was just not as much energy in the gym. I’ve gotten a little used to it, but I would definitely like the fans back.”

For Fresno State’s Senior Night, Feb. 27 vs. UNLV, Utti had family members (sort of) in attendance.

“They had our parents up on the big screen, to announce us into the starting lineup,” Utti said. “It was definitely way different not having them in the gym, but it was still a special night.”

It’s also just beginning to hit Utti that her four years at Fresno State could be up.

“It started Senior Night, thinking that game was going to be my last game at the Save Mart Center,” she said. But, “I’m not sure it will sink in until it’s done.”

And even then, there’s a chance that Utti could return next season.

“I do have another year of eligibility, but I haven’t decided what route I want to take, or if I want to keep playing,” said Utti, who has had to deal with shoulder problems on her shooting arm for most of the 2021 season.

The injury happened in one of early games, she said. Utti had to wear a shoulder wrap under her uniform the rest of the season.

“It’s just there to make sure it’s stable. I haven’t had to change much as far as shooting. This year has not been the easiest. With COVID and all the hoops we have to go through just to play … it’s been a little mentally draining.”

Throughout it all, Utti always gained strength from the hometown support she received from Seaside.

“Seaside has always been one of my biggest support systems, all the time,” said Utti, who is closing in on her degree in business finance. “I see the different posts on Facebook and the articles, so I really appreciate the support throughout my past four years.”