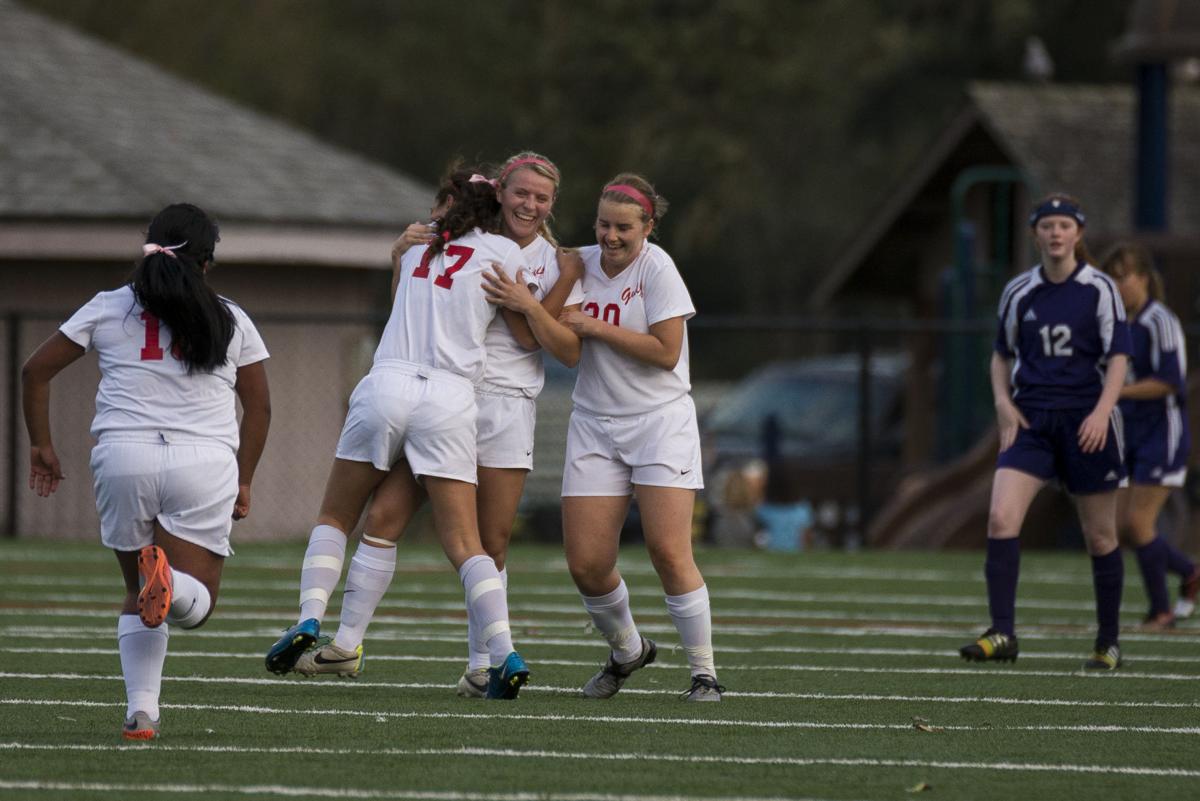 Seaside players celebrate after a goal by Whitney Westerholm, center, during their soccer match against Astoria at Broadway Field Thursday. 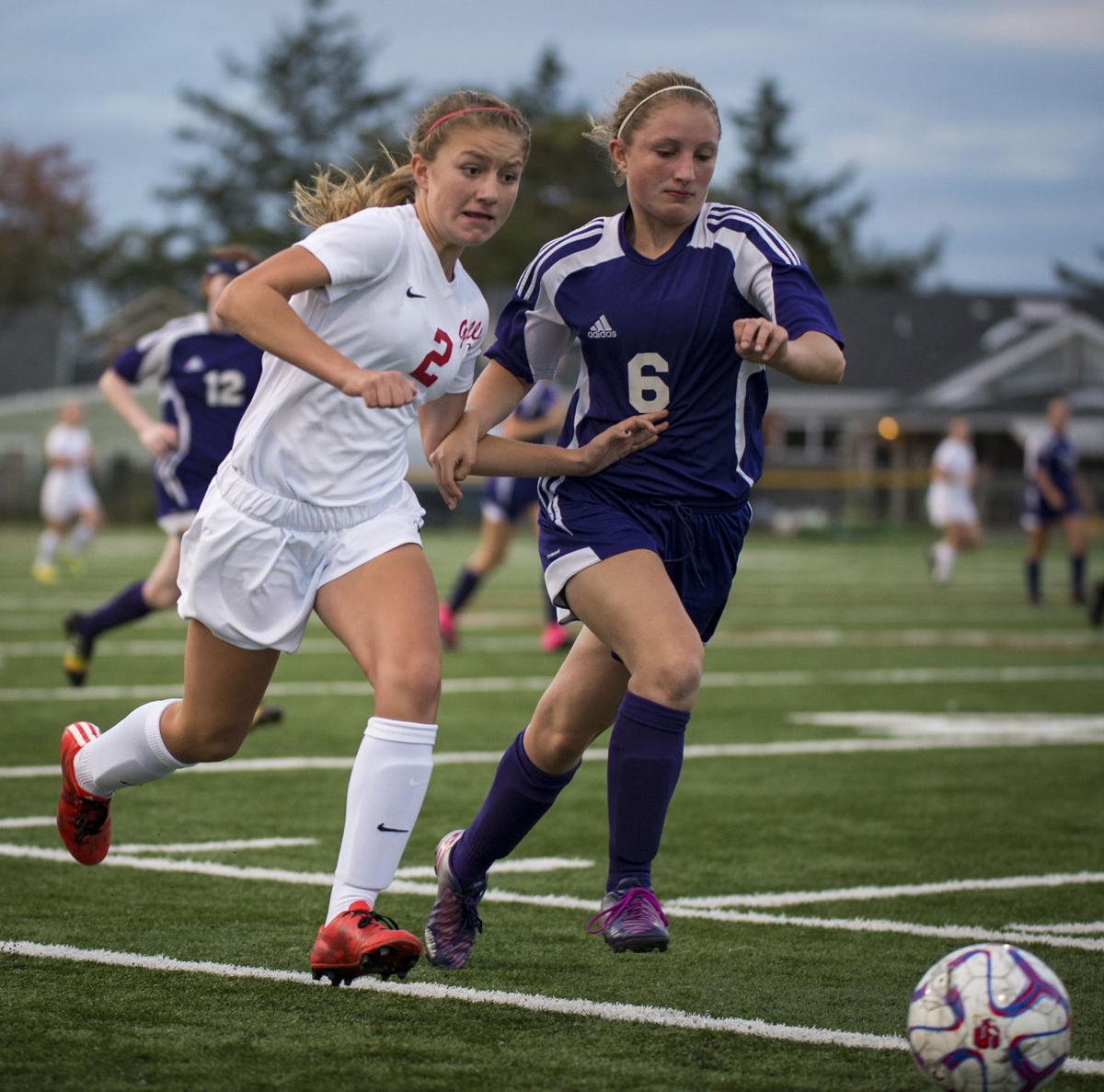 Seagull Audrey Kunde, No. 2, fights for possession with Astoria's Sariah Deiffenbach, No. 6, during their soccer match. 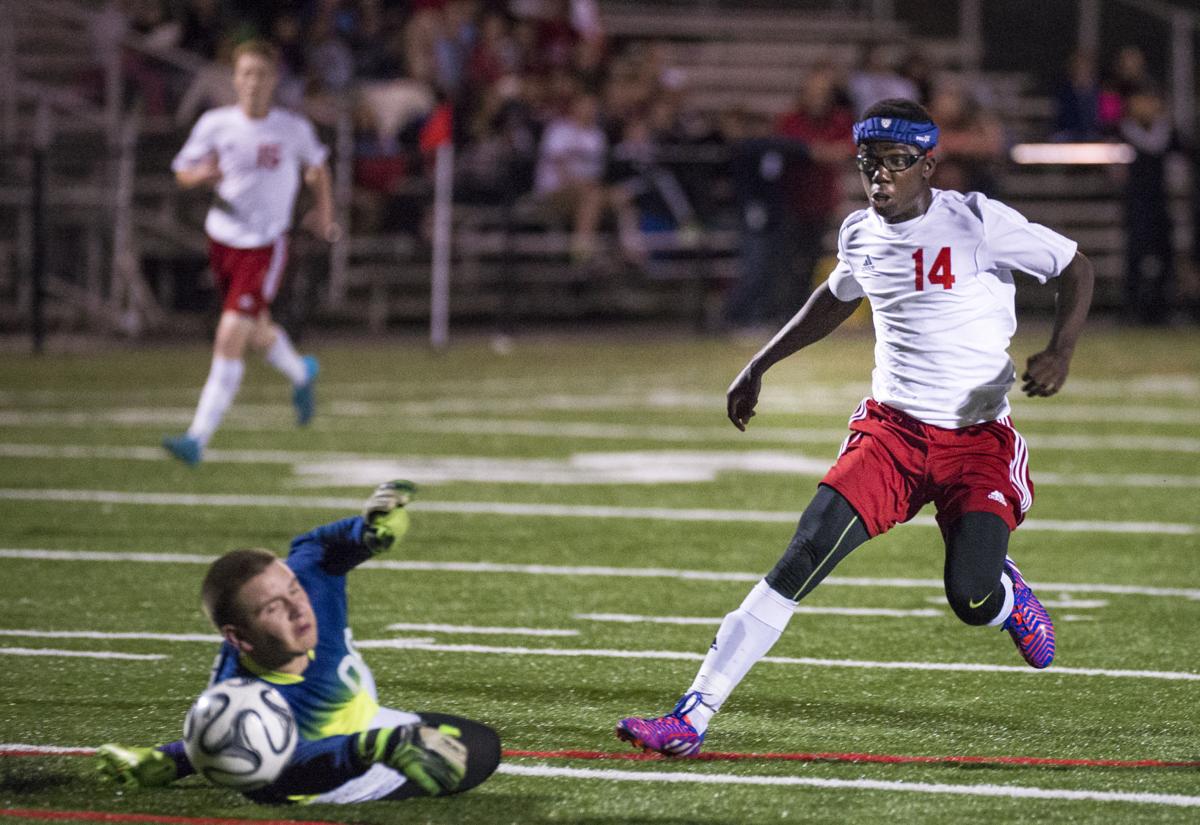 Seaside's Juneau Meyer, No. 14, scores a goal past Astoria goalkeeper Kyle Birge, No. 00, during the first half of the match at Broadway Field Thursday. 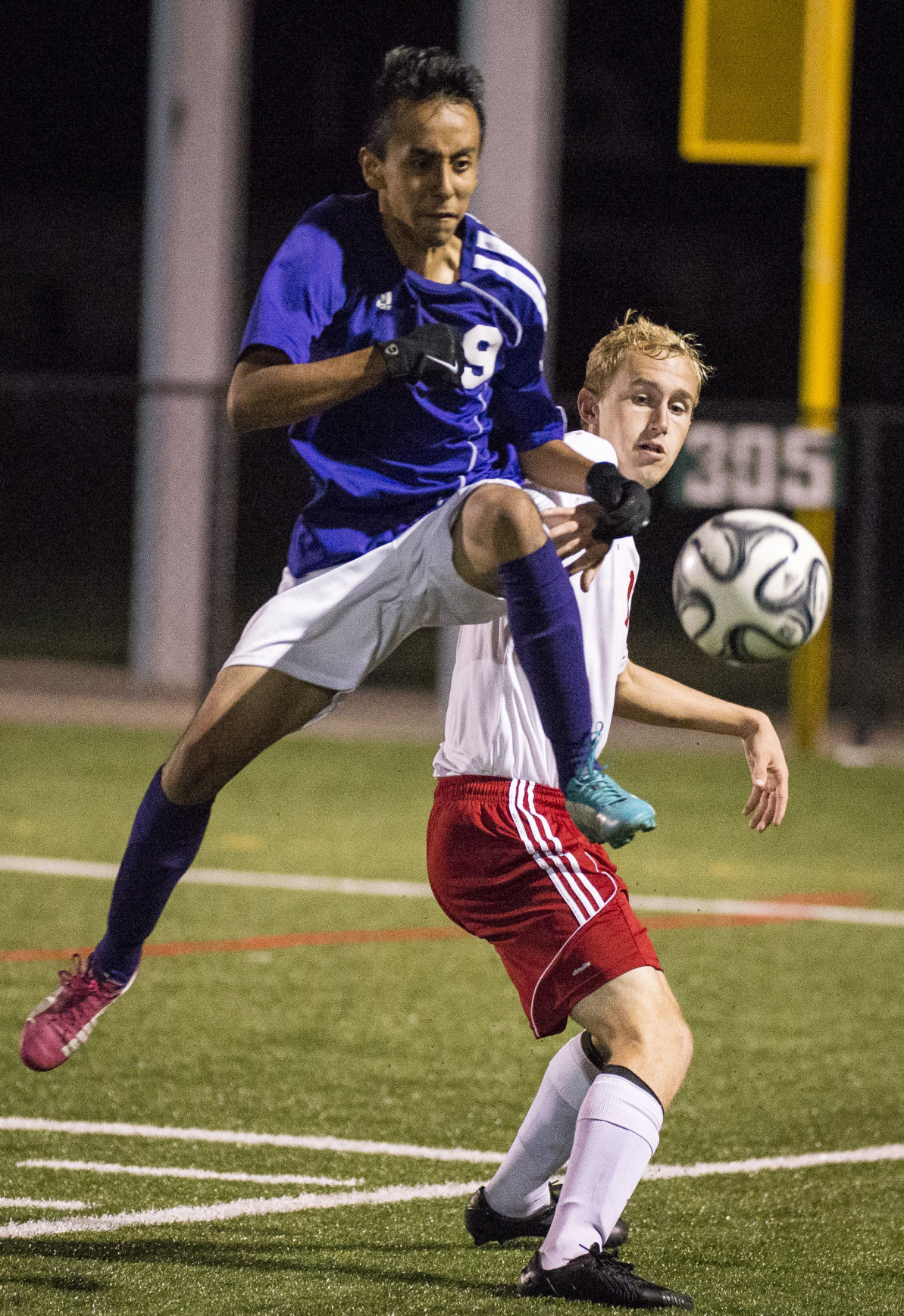 Astoria's Jorge Herrejon, No. 9, fights for possession with Seaside's Taylor Barnes, No. 11, in the second half. 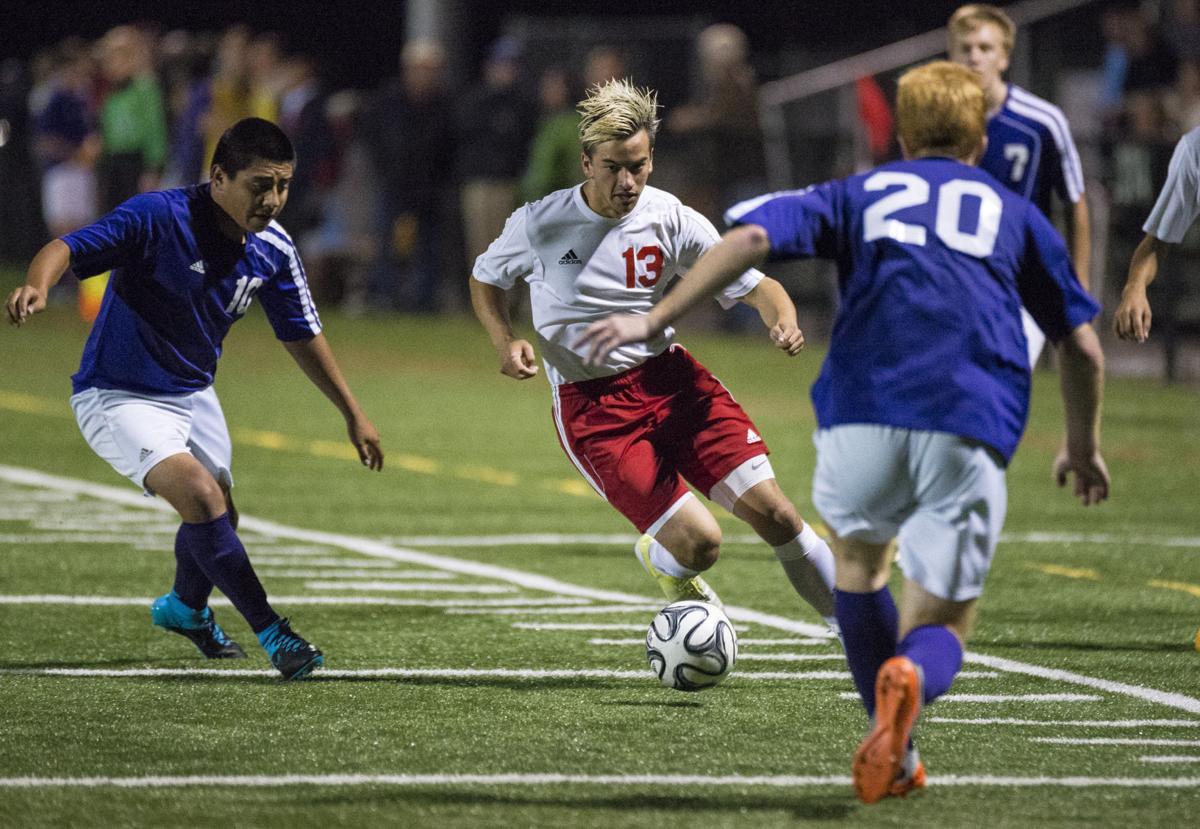 Seaside's Will Garvin, No. 13, pushes the ball up the field in the second half of the soccer match against Astoria at Broadway Field Thursday.

Seaside players celebrate after a goal by Whitney Westerholm, center, during their soccer match against Astoria at Broadway Field Thursday.

Seagull Audrey Kunde, No. 2, fights for possession with Astoria's Sariah Deiffenbach, No. 6, during their soccer match.

Seaside's Juneau Meyer, No. 14, scores a goal past Astoria goalkeeper Kyle Birge, No. 00, during the first half of the match at Broadway Field Thursday.

Astoria's Jorge Herrejon, No. 9, fights for possession with Seaside's Taylor Barnes, No. 11, in the second half.

Seaside's Will Garvin, No. 13, pushes the ball up the field in the second half of the soccer match against Astoria at Broadway Field Thursday.

Clatsop Clash boys soccer is beginning to look a lot like the old days, when the winner of the season series usually ended up as the Cowapa League champion.

And the Seaside Gulls are halfway there, following a big 2-1 win over Astoria at Broadway Field Sept. 24.

A laser beam shot off the foot of Jackson Januik snapped a 1-1 tie with three minutes, 30 seconds left, and the Gulls are now the Cowapa’s only unbeaten team at 2-0 (keeping in mind that it’s only an eight-game league season, with Banks not fielding a varsity team).

There’s still work to do, but with the main challengers all with either one or two losses, Seaside now has the inside track to a league title.

“That puts us in the driver’s seat, but we have to see Astoria again. We know how they’re going to come out, especially at their house,” said Seaside coach John Chapman. “But we can say ‘advantage Seaside’ at the moment.”

The Fishermen jumped on the scoreboard first in the 13th minute, when Luis Herrejon centered a pass from the end line to Cole Beeson in front of the net, and Beeson scored from close range.

The Seaside players were not rattled, however.

“No — with the possession that we had, I thought we could come back and strike it,” Chapman said. “Our team networked the ball very well. We were very patient and controlling with the ball. We were putting a lot of pressure on them with our free kicks, and I thought it was basically a question of time before we got the right touch on the ball to put it in.”

A few Seaside free kick opportunities were saved by Astoria keeper Kyle Birge, before the Gulls utilized their team speed to tie the game.

On a pass down the center of the field, Seaside’s Juneau Meyer outraced an Astoria defender, got a foot on the ball and managed to avoid a collision with Birge to score in the 21st minute.

Meyer was assessed a yellow card after the score, but the goal stood.

“I was disappointed that (Meyer) got a yellow card, because he followed the ball and the referee said he was showboating,” Chapman said. “Overall, the referee did a good job. He called it extremely tight, because he knew it was a local derby, and we had to coach around that. We said at halftime, ‘he’s already given out four cards, so we’re going to have to be very cautious of our second half activities.’”

Seaside finished the first half with a 4-3 advantage in shots on goal.

The Seaside defense limited Astoria to just one shot in the second half, while the Gulls’ defense continued to pressure the Fishermen.

“I thought (the Fishermen) played well, but I don’t think they had many opportunities,” Chapman said. “They basically capitalized on a goalkeeper mistake, and their shots were never really threatening.”

Januik’s game-winning goal came off a pass from Colton Carter, as Januik set his sights on the net and delivered from nearly 35 yards out.

“Jackson Januik has just been massive,” Chapman said. “Our whole defensive line of Raiden (Bowles), Brent (Walsh) and Rafi (Sibony) did a great job. We didn’t do any substituting on the back line.

“We dominated possession on the field and our defense was stronger than theirs,” he added.

And now, the tide could be turning in the Clatsop Clash rivalry. It was Seaside’s first win over Astoria since a 1-0 victory on Oct. 20, 2010.

“The Astoria rivalry is always huge, especially when you haven’t won in five years, so you don’t take anything for granted,” Chapman said.

Astoria and Seaside were both coming off big losses Tuesday (the Fishermen lost 10-0 at Scappoose, the Gulls were beaten by Valley Catholic, 7-0), so both clubs were looking to score some goals and avoid 0-2 league starts.

Seaside won Thursday’s showdown, 1-0, as Whitney Westerholm’s free kick early in the second half was just over the outstretched arms of Astoria keeper Lexis Law, for the game’s only goal.

“Astoria always seems to play well against us, so we knew we were going to have to fight for 80 minutes,” said Seaside coach Matt Johnson.

The Gulls had the only two shots on goal of the first half, both from Westerholm, and both saved by Law. Seaside also had three corner kick opportunities, while the Fishermen almost scored when a stray ball nearly went in the net in the 39th minute.

“We tried attacking from the outside, and then we tried some through balls, but we didn’t crack the defense until the second half,” Johnson said.

And it took just over two minutes into the second half for the Gulls to find the net.

After an Astoria foul, Westerholm set up for a free kick from 36 yards out, and placed it just over Law into the upper portion of the net.

“That was a beautifully placed shot, absolutely perfect,” Johnson said of Westerholm’s goal. “Lexi had been smothering everything, and that shot was just barely out of reach, so we got a little lucky.

“I have to give a lot of credit to the defensive back four, the effort of the midfielders, the physical play of the forwards, and the shut-out by our keeper (Jesse Rae Trott),” he said. “We were a little banged up and mentally stretched, but the girls played hard tonight.”

“I think both teams played well tonight,” said Astoria coach Sarah von Colditz. “All it takes is one shot and one goal to change the game. Seaside capitalized on their chance.

“Unfortunately we did not take enough shots to really challenge their keeper,” she added. “Our defensive line did an amazing job. Sariah Dieffenbach, Angela Cuellar, Claire Albright, Hailey Ranta and Lexi Law were on their game tonight.”

'It's going to suck': Badgers share thoughts of playing inside empty Camp Randall

Who is Boo? Smith a sudden standout for Tigers after LSU outing