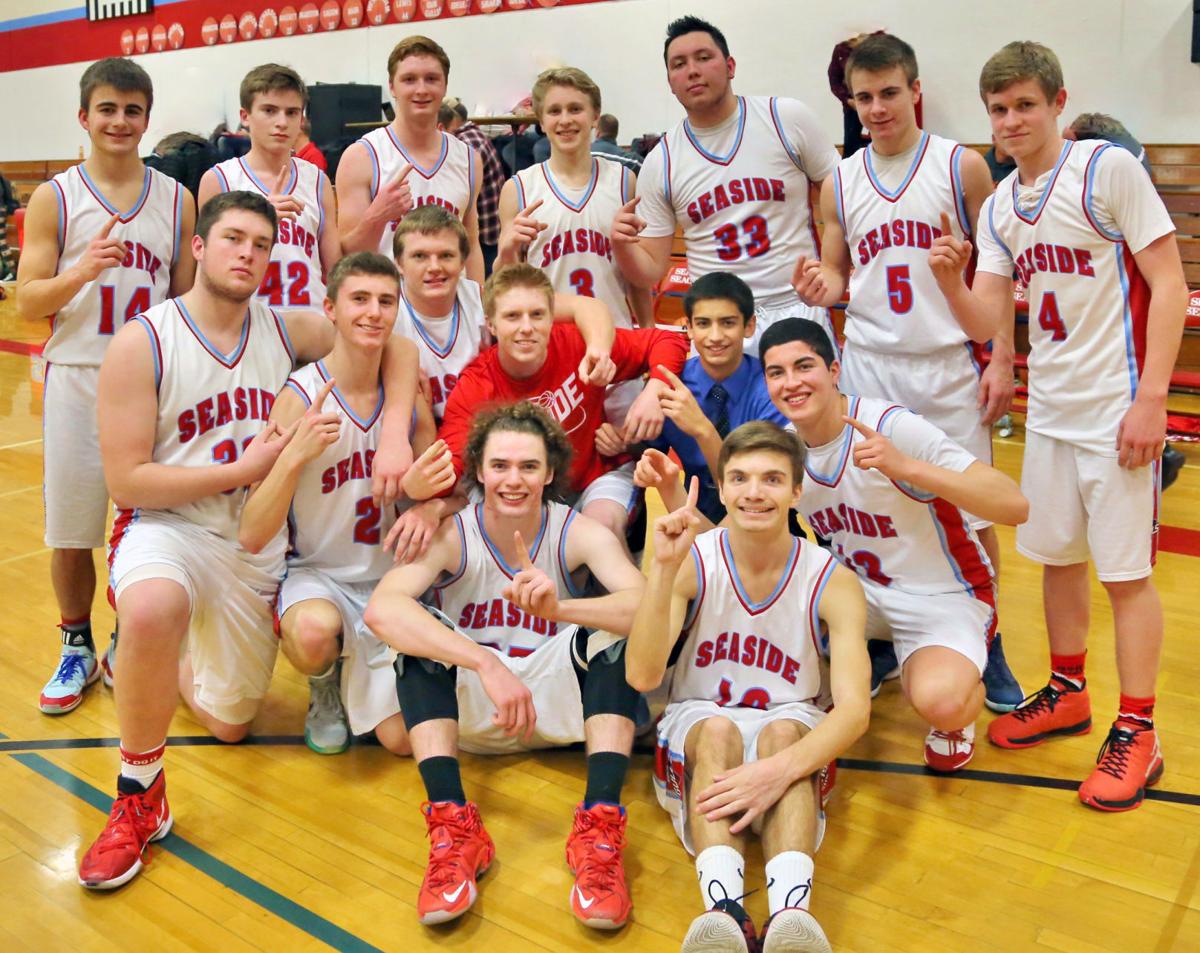 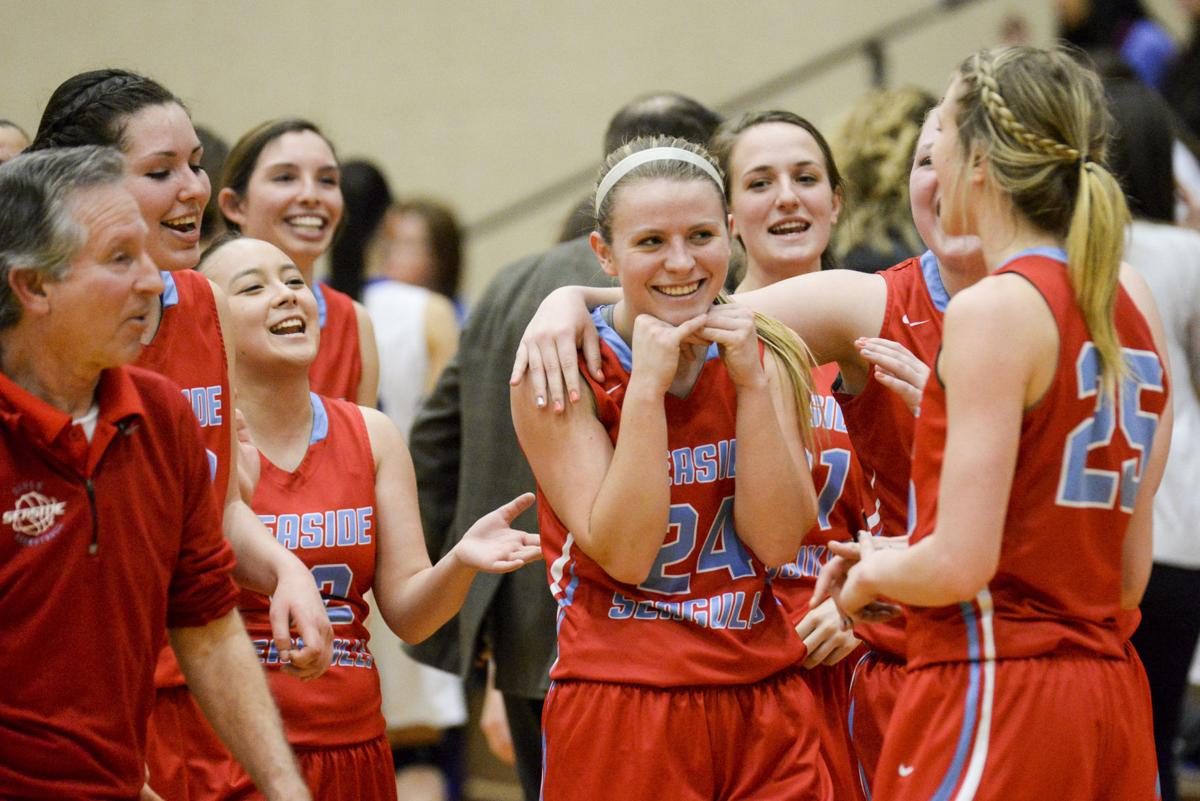 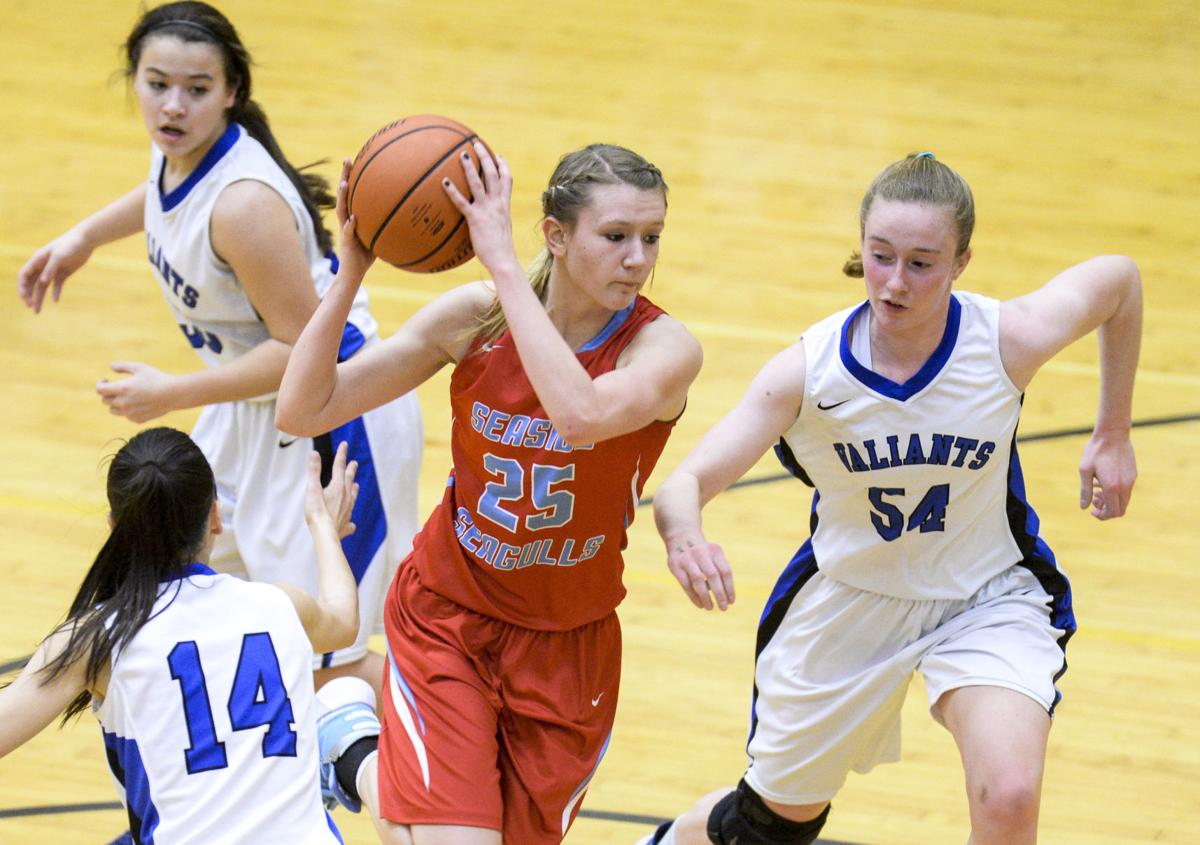 Lady Gull Maddi Utti, No. 25, drives to the hoop during the second quarter of the game against Valley Catholic. 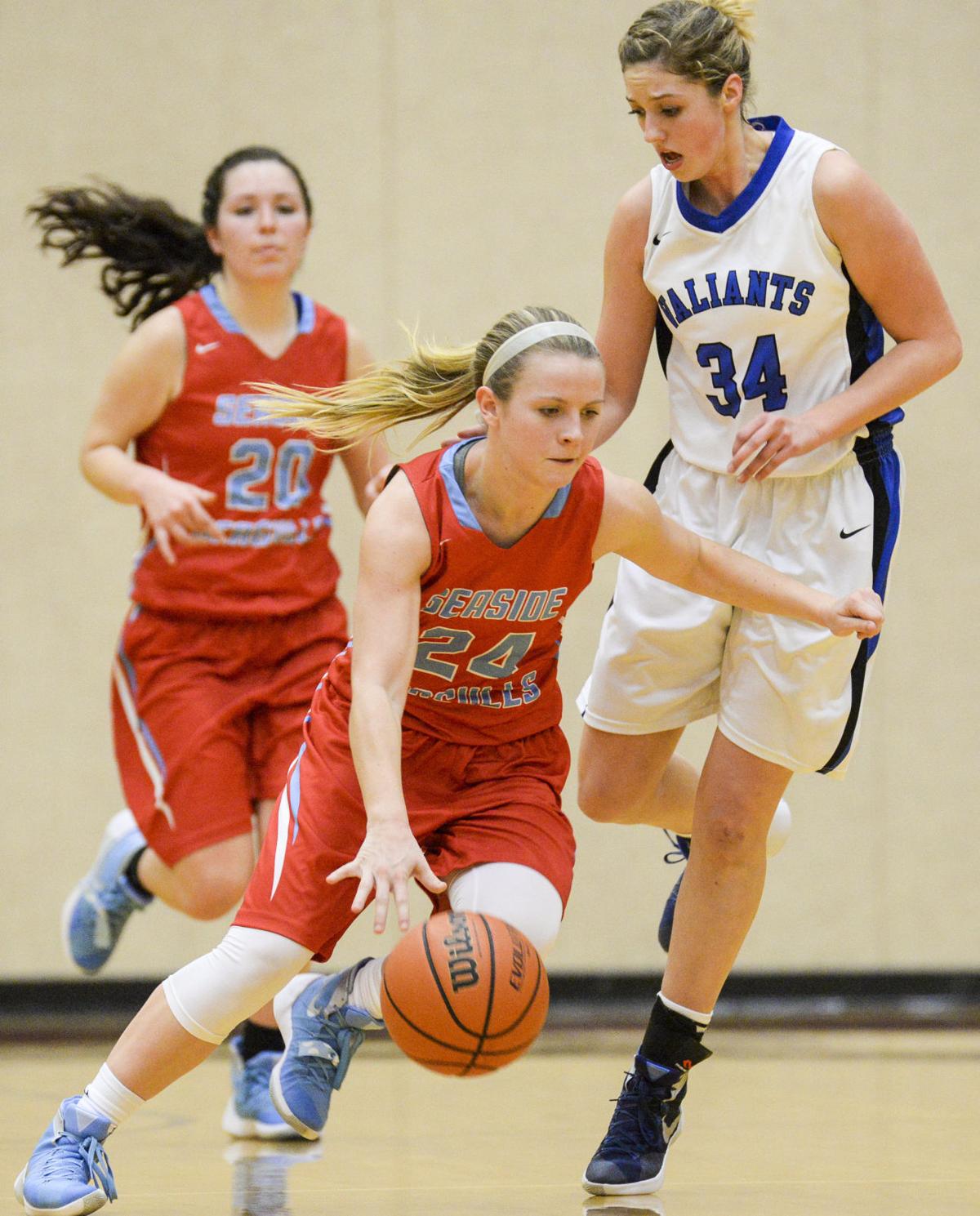 Whitney Westerholm, No. 24, dribbles by Valley Catholic's Petra Flemmer, No. 34, in the fourth quarter. 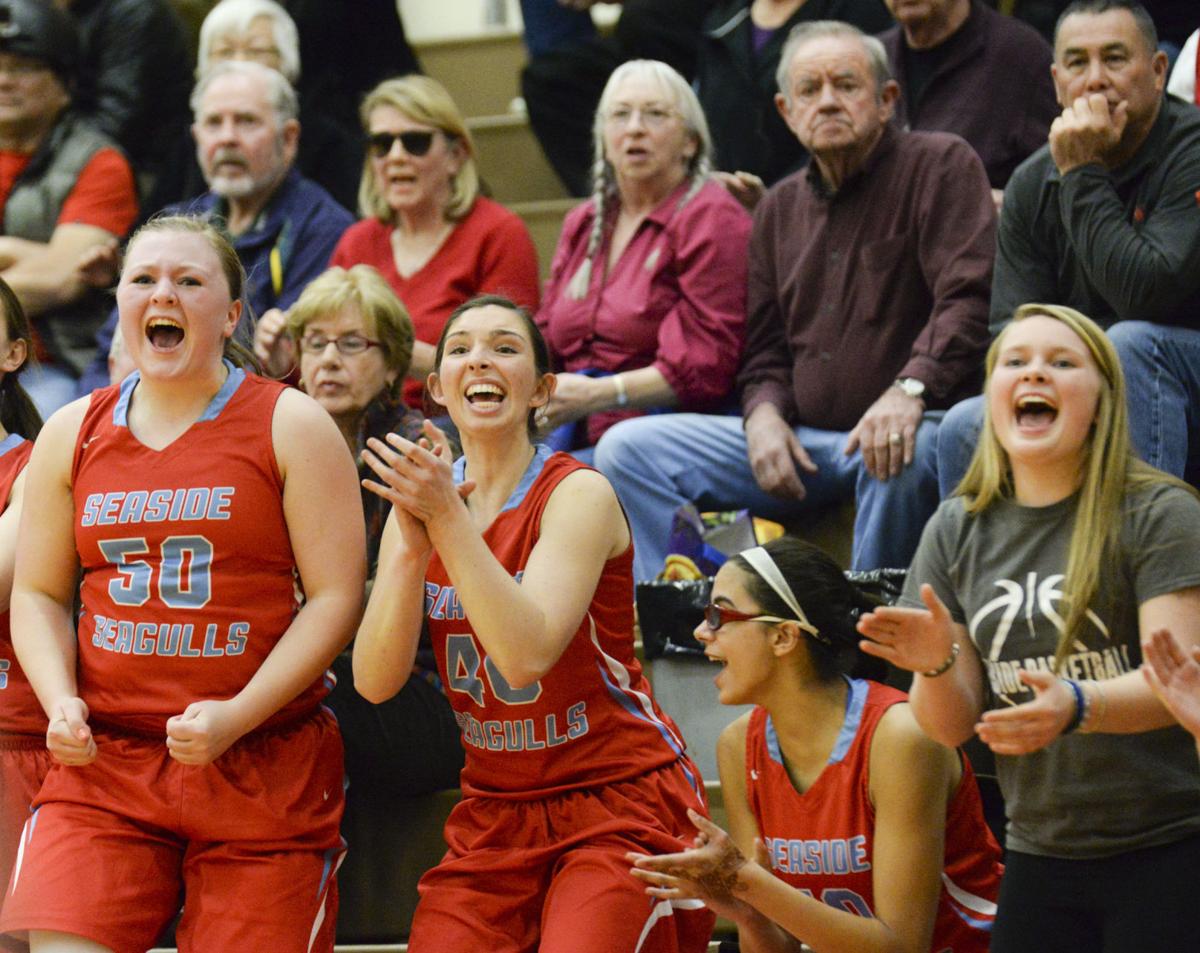 Seaside's Brittany West, No. 50, Annuka Brown, No. 40, and Anesha Smart, No. 10, celebrate a basket in the game against Valley Catholic. 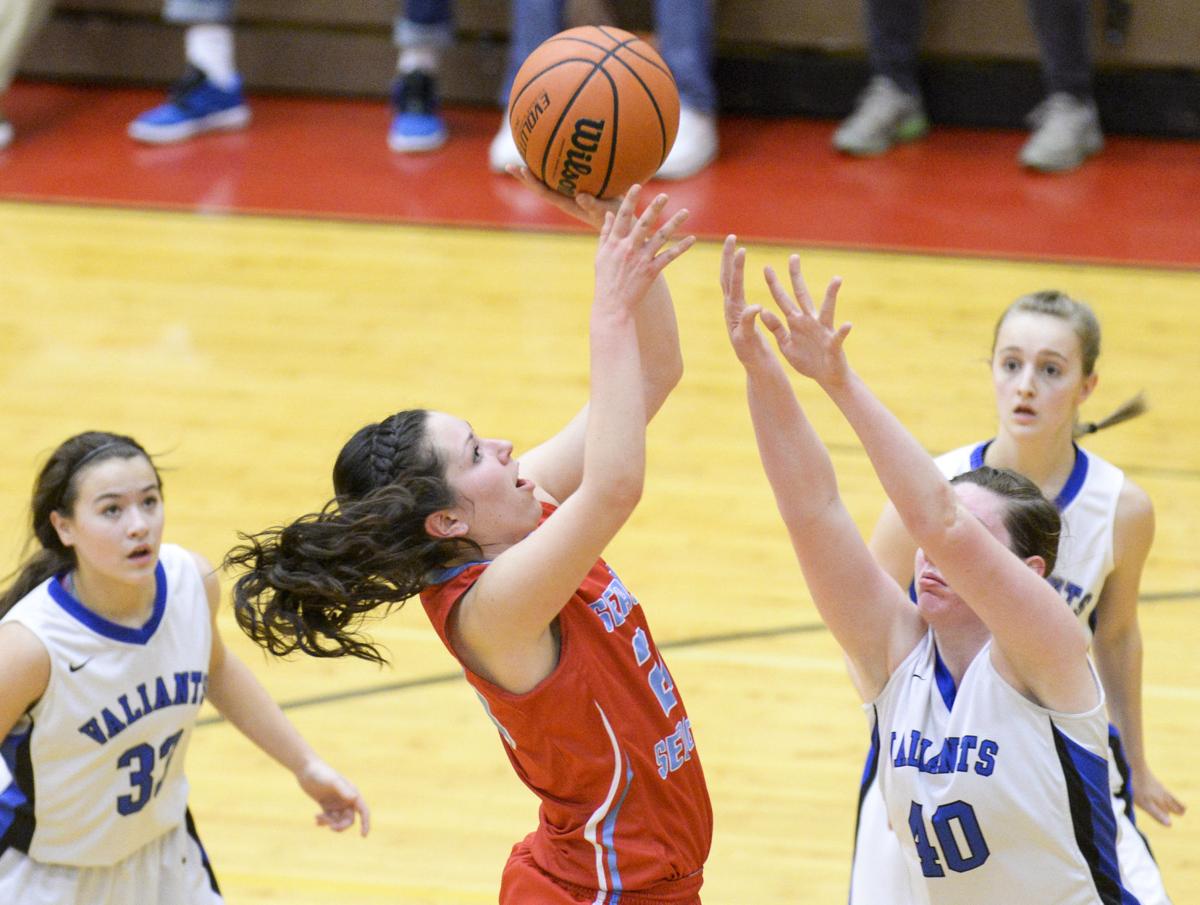 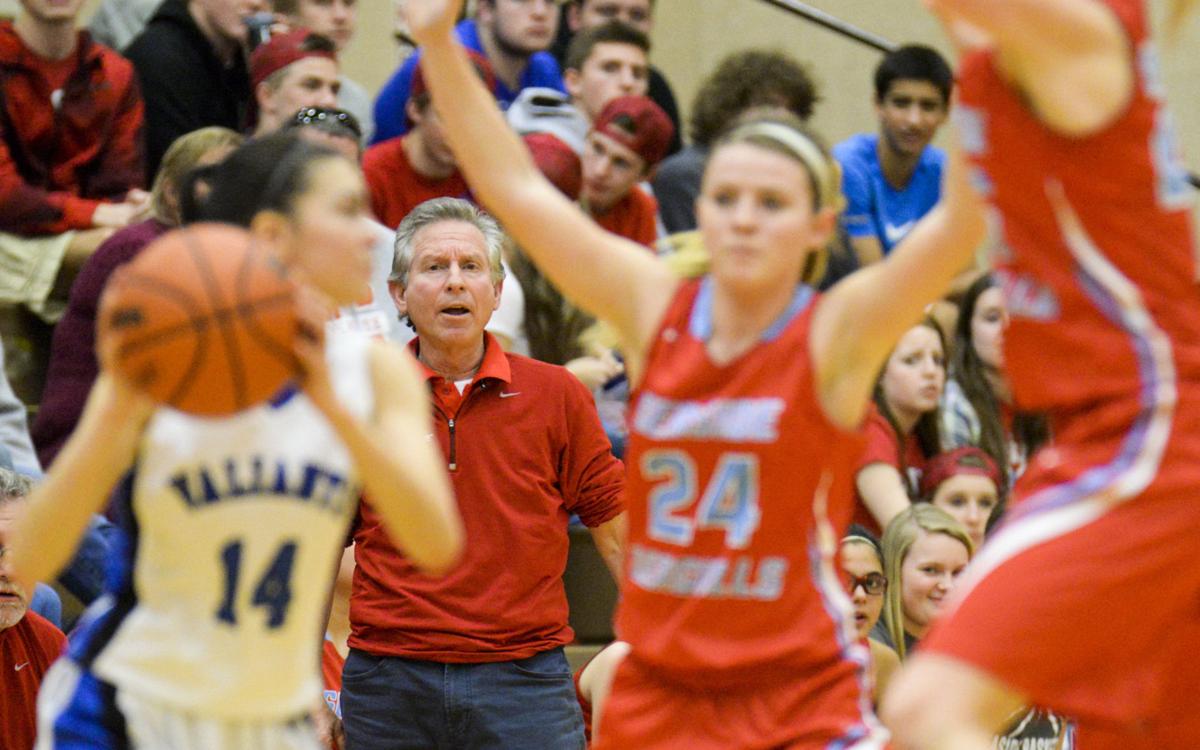 Lady Gull Maddi Utti, No. 25, drives to the hoop during the second quarter of the game against Valley Catholic.

Whitney Westerholm, No. 24, dribbles by Valley Catholic's Petra Flemmer, No. 34, in the fourth quarter.

Seaside's Brittany West, No. 50, Annuka Brown, No. 40, and Anesha Smart, No. 10, celebrate a basket in the game against Valley Catholic.

The Seaside girls and the Seaside and Astoria boys basketball teams will all be hosting state playoff games this weekend.

The Seaside boys put their Feb. 23 game away early, and finished strong to defeat Tillamook 72-37. With the win, the Gulls secured a spot in the Sweet 16 to take the OSAA’s No. 2 ranking into the state playoffs.

The Gulls had to wait for a final score from Astoria, then the celebration was on, as Seaside — which trailed the Fishermen by one game in the standings with two games left.

Seaside finishes the regular season 20-3 overall, their first 20-win season since 2011-12, when the Gulls won 26 and shared the Cowapa title with Scappoose.

Hunter Thompson had his second-straight 20-point game for Seaside, which led 46-20 by halftime.

Jaxson Smith added 15 points for the Gulls, who had 10 players in the scoring column.

The winners of those two games will play each other in the state quarterfinals, 8:15 p.m. March 10 at Liberty High School in Hillsboro.

The stakes were high for the Seaside girls basketball team Tuesday, Feb. 23, in a Cowapa League tie-breaker vs. Valley Catholic at Clatskanie.

With a win, the Gulls bypassed the Regional Play-in round and host the first-round state playoff game March 4. The No. 6-ranked Gulls cruised past the Valiants 53-43.

Seaside had no problem in overcoming a 20-14 deficit in the second quarter, as Sydney Villegas scored six points in the period and Whitney Westerholm dropped in a 3-pointer to help the Gulls take a 28-24 halftime lead.

Paige Ideue also had a pair of 3-pointers in the first half, and scored on a layup to cap a quick 6-0 run to start the second half.

Maddi Utti and Westerholm added 3-pointers, and a three-point play by Villegas basically put the game away, 43-27.

Utti led the Gulls with 14 points to go with eight rebounds, and Westerholm celebrated her birthday with 11 points and four assists. Villegas finished with a double-double, 11 points and 10 boards.

Red Zone podcast: Roster updates and a look at the Badgers schedule