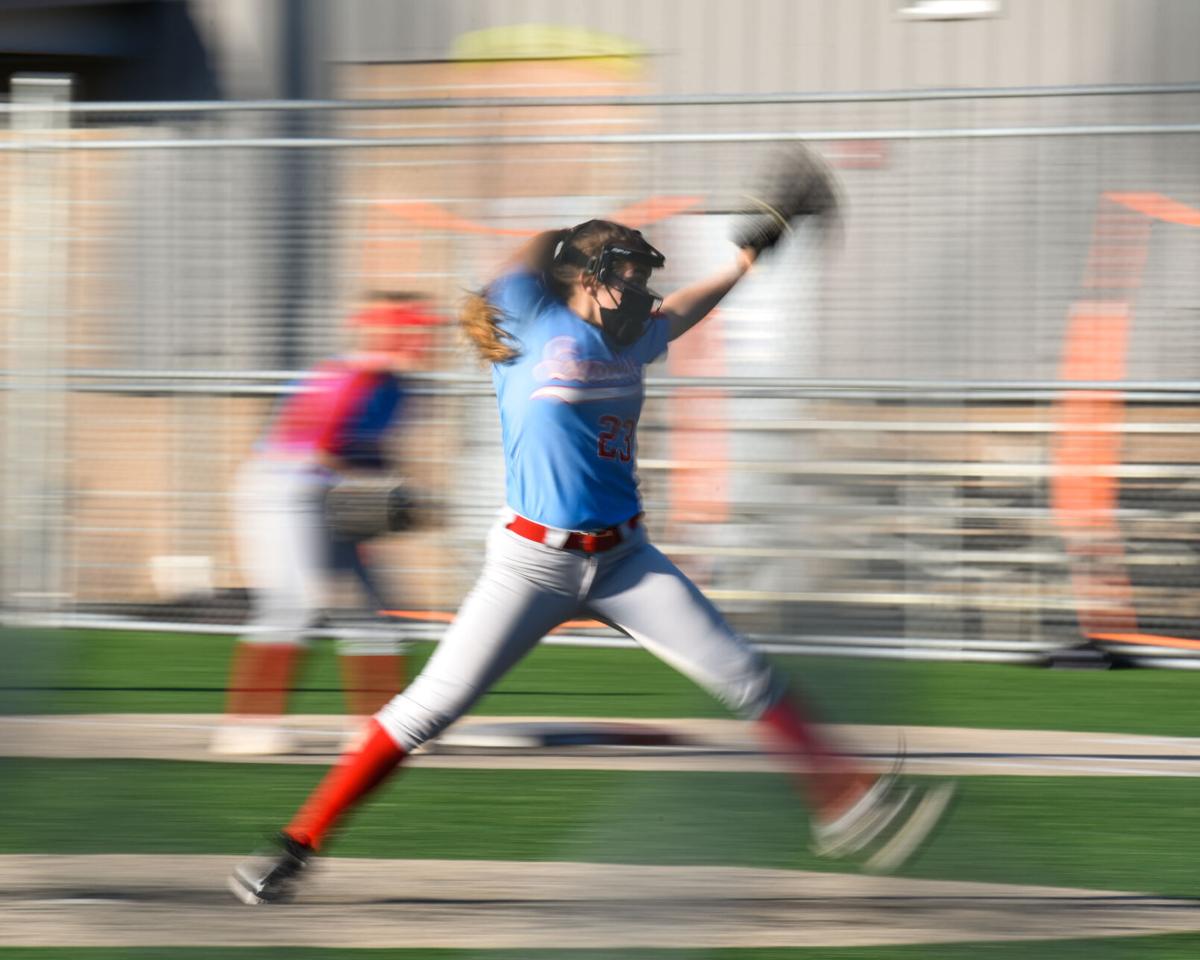 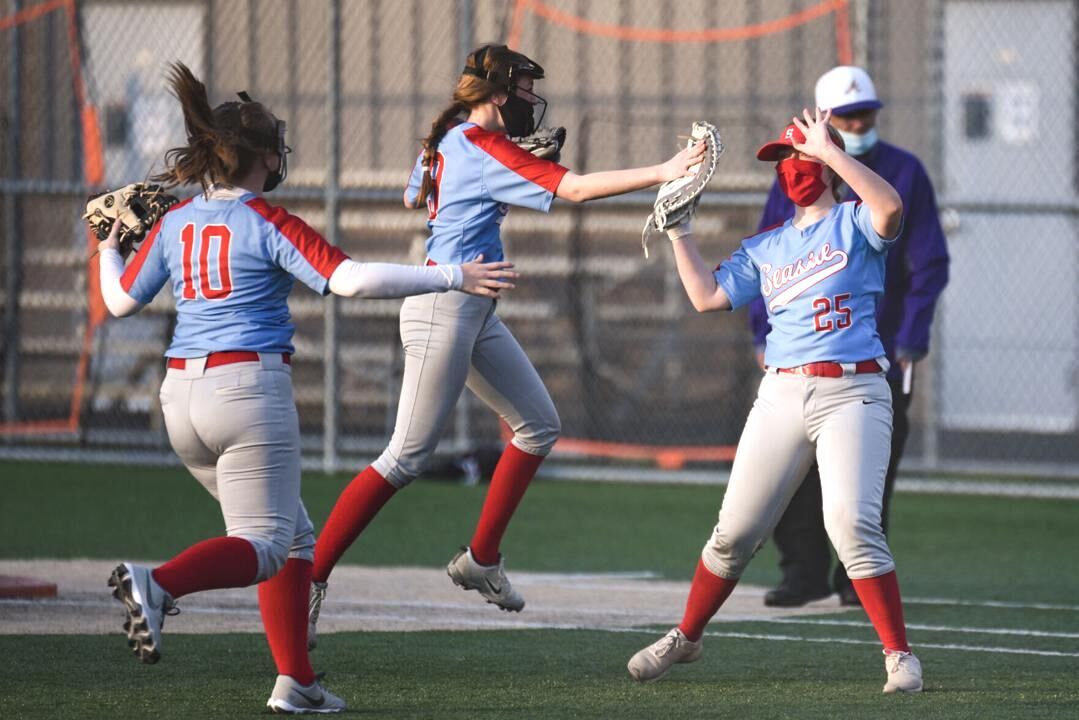 From left, Seaside infielders Kandice Flaigg, Tara Lair and Emma Taylor celebrate the last out, securing their win against Astoria on Tuesday. 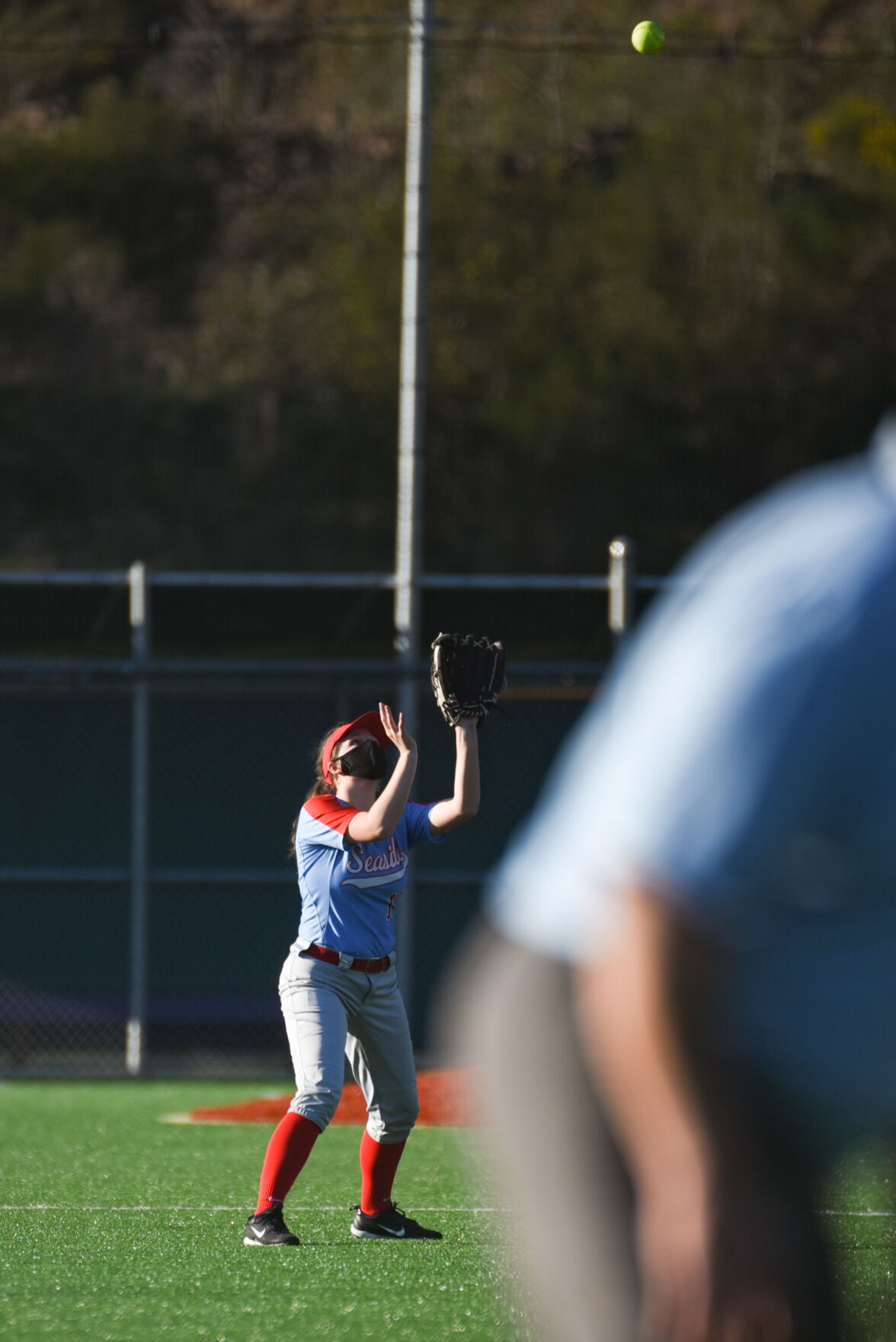 Seaside’s Ila Bowles lines up to catch a fly ball in centerfield.

From left, Seaside infielders Kandice Flaigg, Tara Lair and Emma Taylor celebrate the last out, securing their win against Astoria on Tuesday.

Seaside’s Ila Bowles lines up to catch a fly ball in centerfield.

To call this year’s sports reopening “long-awaited” would have been an understatement for hundreds of high school athletes around the state.

For the first time in nearly two years, baseball and softball players, golfers and track athletes were out and about, actually competing in events sanctioned by the Oregon School Activities Association.

“It was amazing. It was a long-awaited wait,” said Seaside softball player Kandice Flaigg, whose team opened the 2021 season last Tuesday at Astoria. “Two years is too long for us.”

With the exception of a few non-OSAA baseball and softball games last summer, along with some virtual meets for track athletes, spring sports had not seen the light of day since 2019.

Players were a bit rusty, some skills have diminished and games weren’t the prettiest — but athletes and coaches were back on the field, and that’s all they wanted.

“We didn’t have any seniors last year, so this year’s senior group has been waiting for eons to play this one,” said Seaside softball coach Joel Dierickx.

And Flaigg’s team happened to be victorious, as Seaside topped the Lady Fishermen 16-12 in Cowapa League softball at CMH Field.

“We were just going to give our best effort, and put everything into the short season that we’ll have,” said the senior. “We got going, and we realized that, ‘Oh my gosh, we’re winning!’”

And win they did, snapping a string of 13 straight victories for the Fishermen.

In Seaside, the Gulls topped the Fishermen 15-12 in a Clatsop Clash baseball opener.

Rosters have a different look

Rosters and teams around the state looked a lot different than last seen.

In Oregon, the 2019-20 high school sports year ended in March 2020, abruptly bringing state basketball tournaments to a close just as they were set to begin.

Baseball and softball players, along with golf and track athletes, got the short end of the stick, so to speak.

Individuals and teams competing in spring sports never made it to the field, as their seasons were completely canceled.

Couple that with a short preseason, and it’s been a while since spring sport athletes have seen the field, which made for a few errors in season openers.

In softball, Seaside topped Astoria 16-12, snapping a string of 13 straight Astoria wins going back to 2015.

Typical of most openers last week, the Clatsop Clash baseball game got off to a slow start, with a combined eight runs on one hit, seven walks and a couple of big errors in a 40-minute first inning.

In softball, “we only (had) six days of practice before our first game, and we came in realizing that we’re barely into the season, and we’ll put forth what we have,” Dierickx said. “A couple of us were a little late on our timing, but we haven’t seen live pitching for two years.”

On the other hand, “Gracie (Rhodes, the Seaside pitcher) was on fire tonight. She had some amazing pitches. Erin (Owsley) made an amazing stop on a big line drive. We were definitely a little rusty at the start, but came out of it.”

The Lady Gulls led 11-5 after four innings, then held off a rally by the Lady Fishermen.

Seaside’s Erin Owsley was 3-for-3 with four runs scored, four RBIs and a home run.

Emma Taylor and Ila Bowles were each 2-for-4.

Seaside improved to 2-0 with a 10-7 victory over Valley Catholic in Cowapa League softball action last Thursday at Broadway Field.

Seaside pitcher Gracie Rhodes struck out 10 batters with two walks, while the Gulls supported her with five runs in the fifth inning and two in the sixth on their way to the win.

The Valiants had six hits and held a 6-3 lead in the top of the fifth before Seaside’s rally in the bottom of the fifth.

Seaside’s Tara Lair and Kandice Flaigg had two hits apiece, and Ila Bowles had three hits with a double. Erin Owsley had a double and drove in four runs.

Malia Groshong had a home run for Valley Catholic.

On Monday, Seaside pulled into a first place tie with Banks in the Cowapa League softball standings, holding off Tillamook 6-5 in a single game Monday at Tillamook.

The Lady Gulls scored four runs in the second inning on their way to a 6-1 lead after three. Tillamook rallied with two runs in the fifth and two runs with two outs in the seventh, before Gracie Rhodes retired the final batter.

Kandice Flaigg, Emma Taylor and Rhodes were all 2-for-3 at the plate, while Flaigg scored twice and Rhodes had a double for Seaside, now 3-0 in league play

In baseball action, Astoria and Seaside opened 2021 with a Clatsop Clash at Broadway Field, where the Gulls scored their third win in the last four meetings, also giving new coach Brett Wolfe a victory in his Seaside debut. It was career win No. 495 for Wolfe, after 494 at North Medford.

Seaside had an inside-the-park home run from Jarred White in the first inning, a three-run double by Andrew Teubner in the second, and a solo inside-the-park HR from Riley Kuhl in the fifth.

Shortstop Lawson Talamantez turned in a few web gems, as did Kuhl behind the plate in the seventh inning.

On Monday, Seaside warmed up for a showdown with Banks with a 9-5 win at Tillamook.

In a back-and-forth contest, Seaside led 2-0 after two innings, Tillamook led 4-2 after three, and the teams were tied 5-5 after four.

The Gulls scored two runs in the fifth and two in the seventh to pull away, and pitchers Tanner Kraushaar and Justin Morris did the rest, holding Tillamook to seven hits and four walks with seven strikeouts.