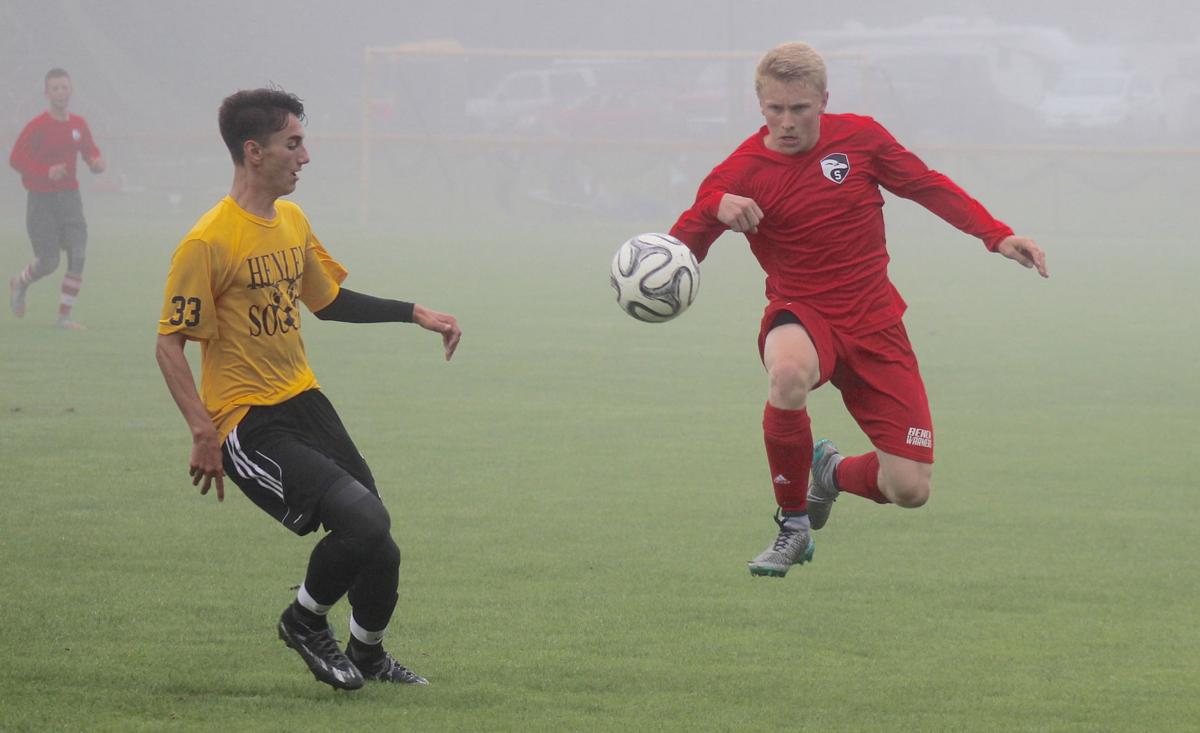 Seaside's Jackson Januik, right, appears to jump out of the fog early Saturday morning in a soccer scrimmage against Henley. 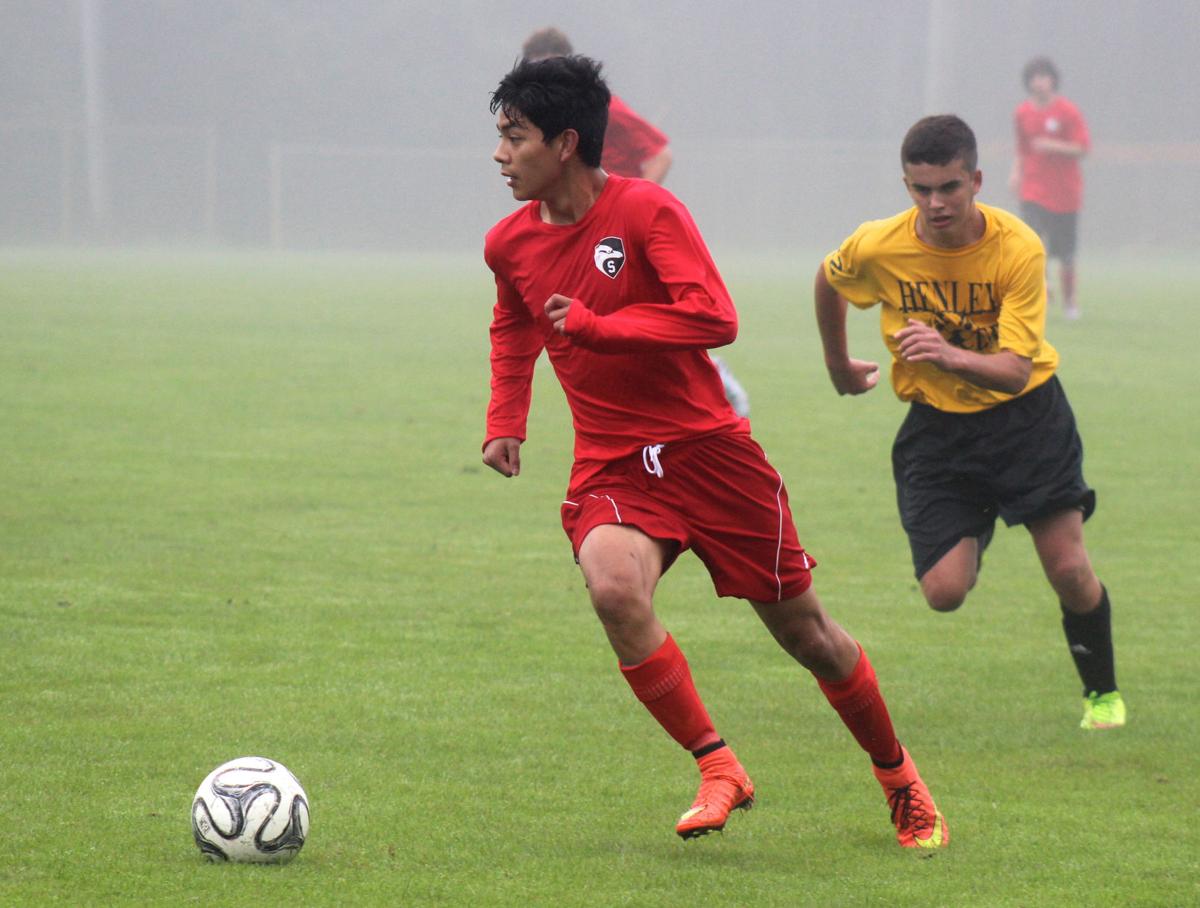 Irving Contreras of Seaside outraces a Henley defender down the field in a Saturday morning soccer match. 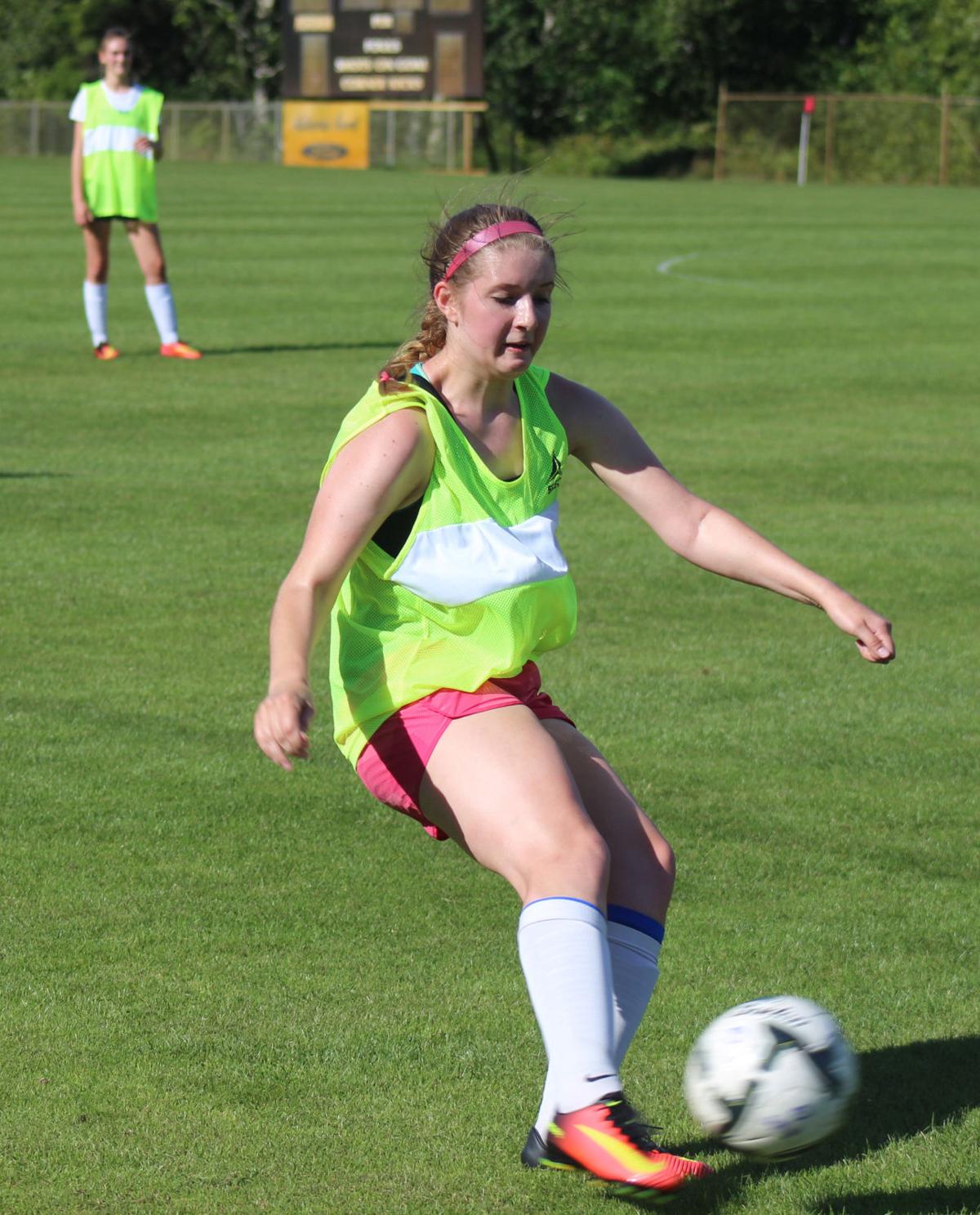 Astoria's Anna Gimre sends a ball towards the goal in Friday's scrimmage against St. Helens.

Seaside's Jackson Januik, right, appears to jump out of the fog early Saturday morning in a soccer scrimmage against Henley.

Irving Contreras of Seaside outraces a Henley defender down the field in a Saturday morning soccer match.

Astoria's Anna Gimre sends a ball towards the goal in Friday's scrimmage against St. Helens.

WARRENTON — It’s a long ways to November, but fans of the Seaside boys soccer team have to be encouraged with the early results.

The Gulls looked to be in midseason form over the weekend in an annual “pre” preseason tournament.

Today is the first official day of fall sports practice, but nowadays — with summer tournaments, open gyms and conditioning camps — most teams in most sports like to get a jump on things. And some local soccer teams took it a bit further over the weekend.

The players were playing and the coaches were coaching in Astoria’s annual preseason tournament Friday, Saturday and Sunday at the Lower Columbia Youth Soccer complex.

Other than a shorter time limit on games, every scrimmage looked pretty much like any regular season game.

Or, in this case, playoff game … since many of the teams that took part will end up in the state playoffs a few months from now.

“It’s just a brilliant tournament that (former Astoria coach) Bill Patterson and LCYSA with Astoria puts on,” said Seaside boys coach John Chapman. “There’s some good schools here. Being local, we’re honored to take part in some of these games.

“Going into daily doubles, it’s a great opportunity to see where our boys are, what we need to work on, and where we need to focus,” he said.

Chapman’s team got off to a great start, as Seaside defeated Hidden Valley 4-0 Friday.

The Gulls also jumped out to a 3-0 lead over Henley, in a 9 a.m. contest Saturday morning. The Hornets — a Class 4A semifinal team last year — scored two goals in the second half, as the Gulls won 3-2.

Seaside’s first goal came from Colton Carter, off a give-and-go from teammate Jackson Januik; Januik assisted on a second goal; and Irving Contreras converted a penalty kick in the closing seconds of the first half.

“That’s a great league they have down there (the Skyline Conference), with Hidden Valley, Mazama, Phoenix and Henley,” Chapman said. “We don’t get to see those teams until a playoff situation. A little early-season flavor helps us see how those leagues do.”

Seaside’s main challenger in the Cowapa League could be Astoria.

The Fishermen scored five first half goals in a win over Class 5A St. Helens Friday, despite not having their coach.

Tim Fastabend — who coached the Astoria boys last year and was recently named the girls’ varsity coach — was on the sidelines for both in the weekend scrimmages.

“I think the boys and the girls looked real good this weekend,” Fastabend said. “It was mainly just a chance to give all the young kids a chance to play.

“These facilities are so nice, and Camp Kiwanilong was open to everybody — it’s just a real nice opportunity for the North Coast to show everyone what we have,” Fastabend said. “The University of Oregon women’s team was here earlier in the summer, OES was here for a few days … and we had 150 kids here this weekend.”

Lee Cain will coach the Astoria boys this season, but Cain was in Mexico on a field trip with students, which included several players for the Astoria girls.

The Lady Fishermen had a nice start, as Hailey Ranta scored in the opening minutes against St. Helens Friday, before the Lions answered with five unanswered goals.

Astoria goalkeeper Lexis Law suffered a wrist injury later in the weekend, but the extent of the injury was not known.

Kentucky's stout defense will be a test for Missouri's new QB

Pregame observations: ILB Riley, WR Manning did not make the trip to OSU