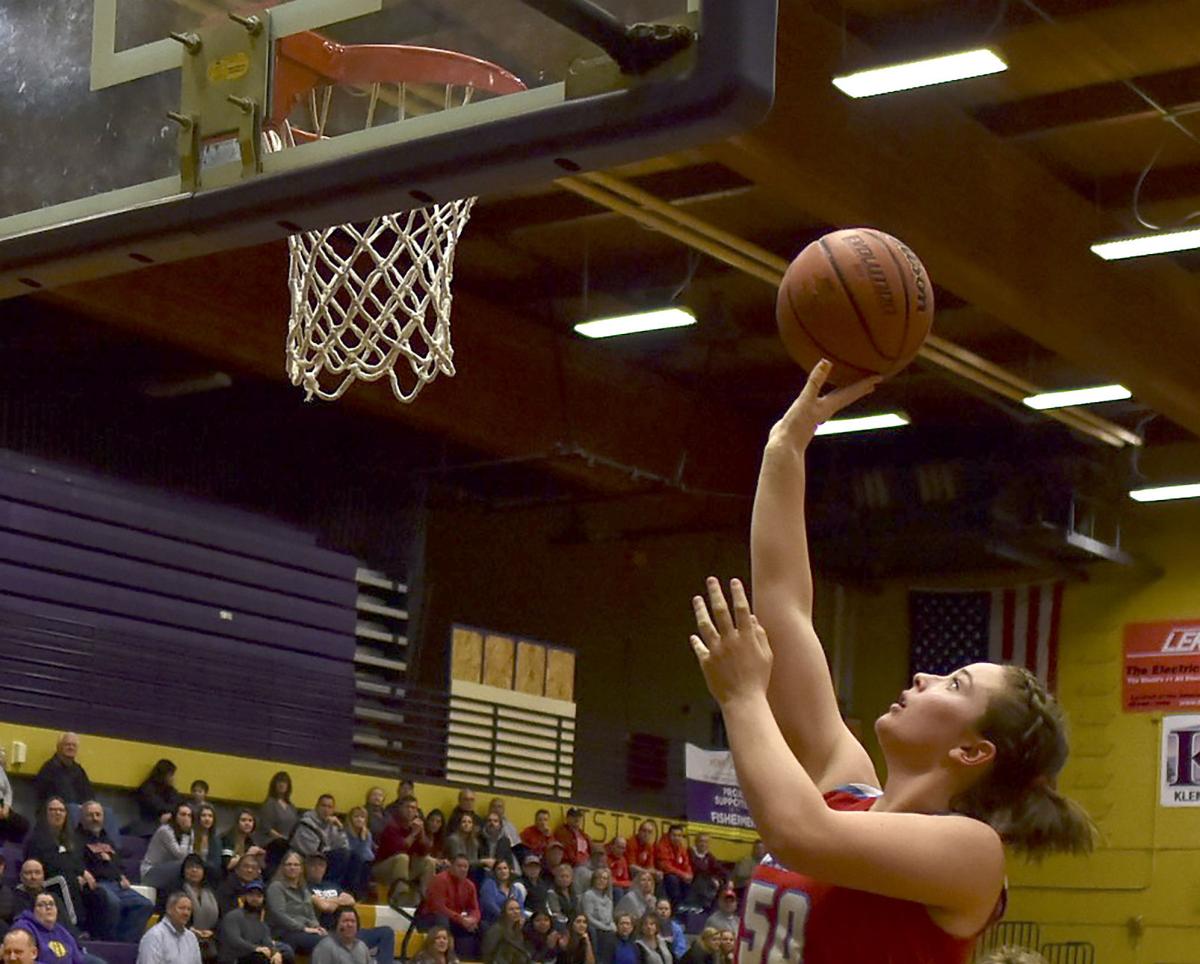 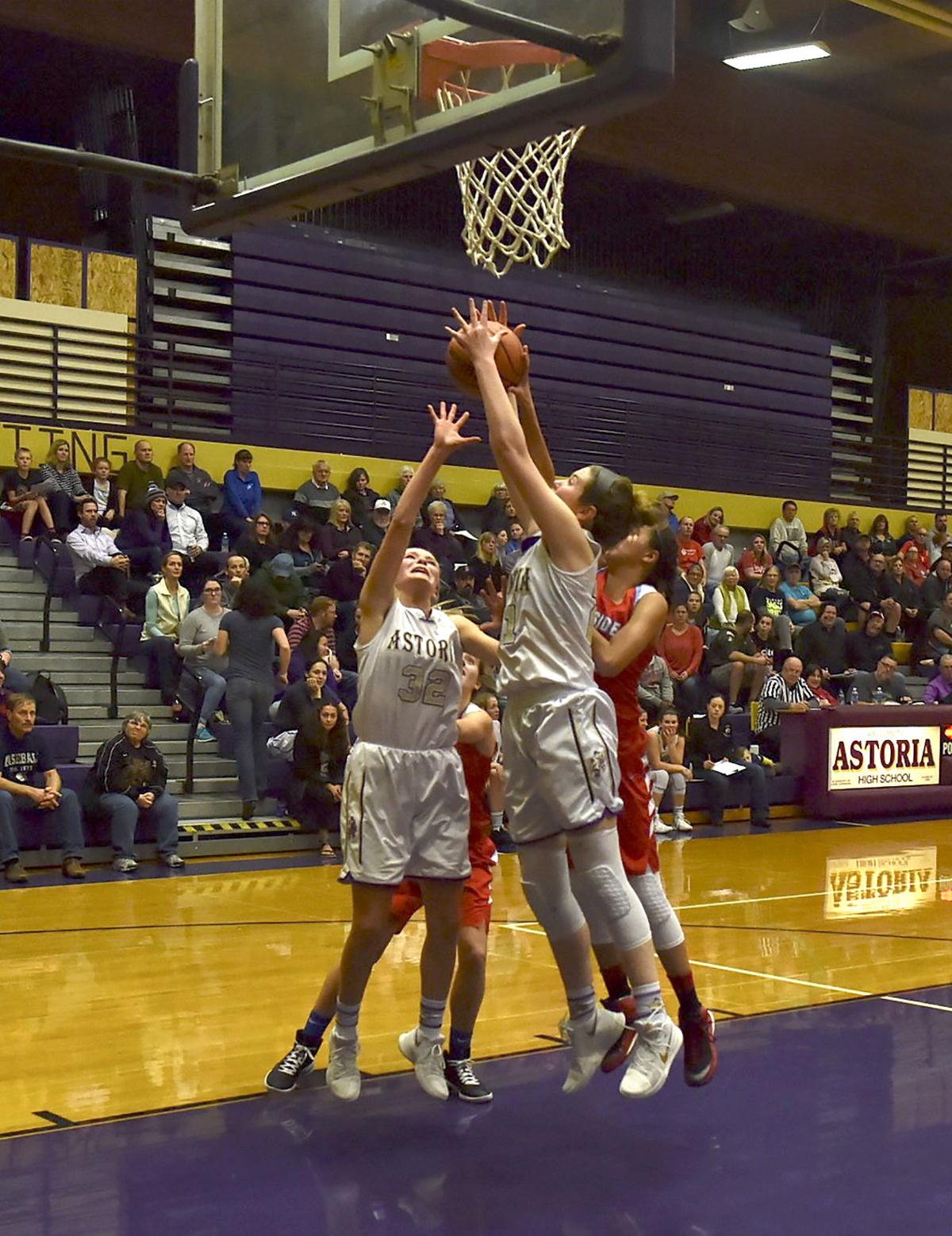 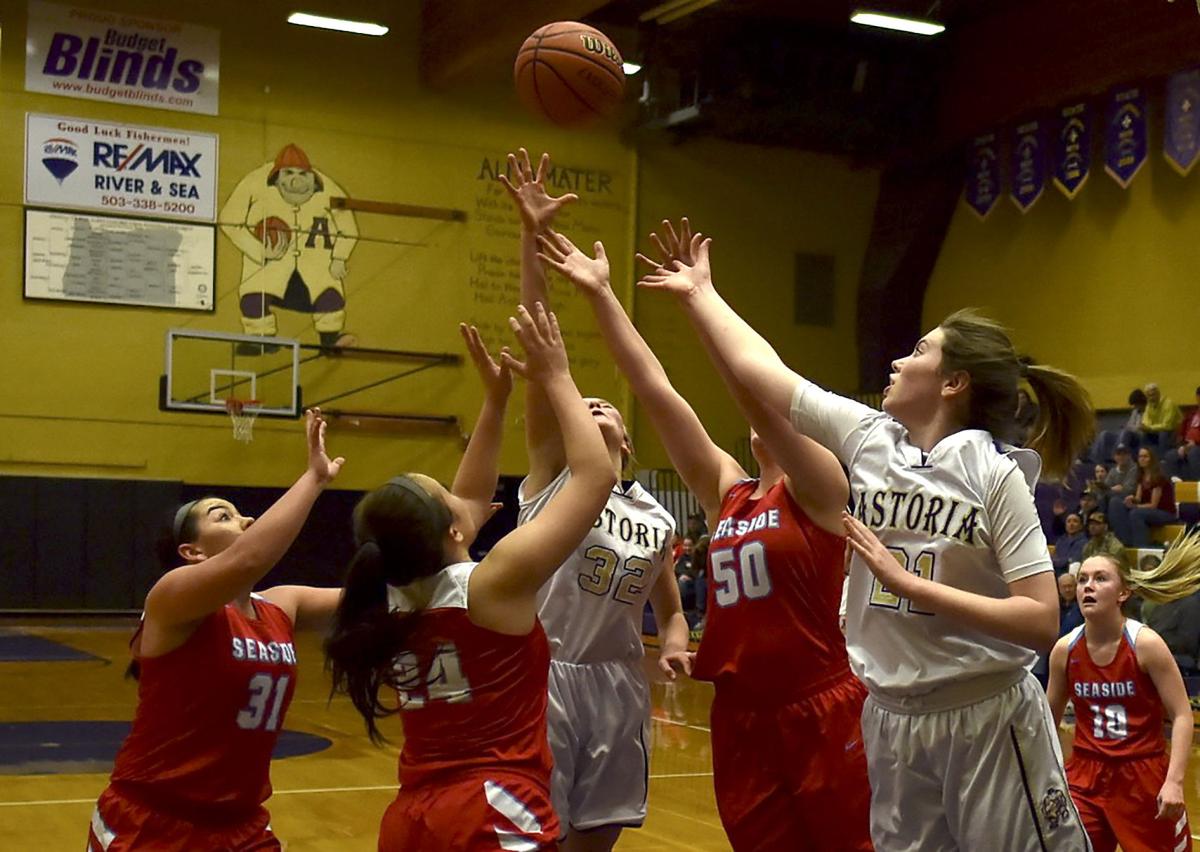 There wasn’t too much at stake for the Astoria girls basketball team Feb. 21 at the Brick House.

Win or lose, the Lady Fishermen were moving on to the Regional Play-in round, and win or lose, their ranking wasn’t going to change. Much.

But when it’s a Clatsop Clash, there’s the “personal pride” thing. And that was enough to get Astoria fired up for the Cowapa League playoff with Seaside.

Brooklynn Hankwitz scored 16 points, and the Lady Fishermen topped the Gulls for the third time this season, 46-36.

The season came to an end for the Gulls, 8-17 overall.

Astoria managed to overcome the dreaded “third meeting” jinx in Wednesday’s game. Even though Seaside lost both regular season meetings, the advantage usually belongs to the losing team the third time around.

“I hate playing the same team three times in a season,” said Astoria coach Mike Jacobson. “It doesn’t matter who it is or how you’ve played against them, it’s tough to beat a team three times.

“And Seaside played well tonight,” he said. “I watched them the other night against Scappoose, and they played well. They wanted to win.”

In three post-season meetings between Astoria and Seaside since 2006, Jacobson is a combined 3-0 as coach (2-0 as Seaside’s coach, now 1-0 with Astoria).

Wednesday’s final score might have favored Seaside, if the Gulls had not missed 16 free throws and 32 shots from the field. Seaside also had 25 turnovers.

As it was, neither team was shy about shooting the ball, as the Gulls and Fishermen combined to take 104 shots from the field, missing 78.

And with a combined 26 fouls in the second half, it was tough for either team to get into a rhythm. Astoria would threaten to pull away several times, and Seaside would respond with a run of its own. The Gulls simply ran out of time.

In Astoria’s case, “I think it was nerves,” Jacobson said. “We weren’t in the gym (Tuesday), so we got out of our routine, and the early start today didn’t help. But some of the kids stepped up today and played good. We need everybody, and I think that showed tonight.”

Three-pointers by Hailey O’Brien and Julia Norris helped the Lady Fishermen build an 11-0 lead out of the gate.

Annaka Garhofer and Jetta Ideue knocked down 3-pointers to bring the Gulls back to within 20-14 at halftime. Seaside’s 6-2 run to start the second half had the Gulls within 22-20, and Jacobson called a timeout. And his team responded.

Following the timeout, freshman Halle Helmersen drained a pair of 3-pointers off the bench, and Hankwitz added two scores underneath for a 32-22 lead.

“We kind of backed off with the intensity level a little, and we had to get ‘em back on the right path,” Jacobson said of his players. “And we made a 10-0 run after they got within two. Brooklynn stayed out of foul trouble and did a great job, and Halle came off the bench and had a great game.”

The Gulls still managed to stay within 10 points, but a stretch of eight straight missed free throws in the second half cost Seaside.

Ideue eventually fouled out, while Astoria’s Kajsa Jackson, O’Brien, Kelsey Fausett and Hankwitz combined to make 6-of-8 free throws in the final minutes to secure the win.

“We were going to get another game no matter what, but we told the girls that they had to come out and play hard,” Jacobson said. “That’s the maturity of a good team.”

The regular season is over, and the state playoffs have not yet started.

It’s that time of year when teams are simply trying to live to play another day.

The winner Feb. 19 — the Seaside Gulls, who managed to extend their season another 24 hours with a 44-40 win over Scappoose, in a Cowapa League girls basketball playoff.

It was a close, but non-dramatic win for the Gulls, as neither team scored over the final four minutes of the game.

“We survived,” said Seaside coach Mike Hawes, whose team improved to 8-16 overall. “I don’t know if we thrived, but we survived. We make it hard on ourselves by giving the ball away too much, which makes it hard for us to get into an offense.”

The first half was a lop-sided free throw shooting contest, with the Gulls taking most of the shots.

Seaside made just three field goals over the first two quarters, but made up for it at the line. The Gulls made 13-of-18 free throws, to just 3-for-4 for Scappoose.

“(The Indians) were pressing us, so we had some fast-break opportunities,” Hawes said. “We made free throws in the second quarter. We didn’t make many baskets (1-for-9 in the period), but we made free throws. We scored enough to fend them off, and made just enough shots to keep a lead at the end.”

The one exciting stretch was a 9-2 run by Seaside to end the third period.

After the Indians had taken their largest lead at 31-28 with 2:40 left, Seaside’s Ruby Davis hit a short jumper that sparked the run. Annaka Garhofer scored on a layup, Emy Kiser drained a 3-pointer, and Bryre Babbitt followed up a missed shot with a layup in the final seconds, giving Seaside a 37-33 lead.

And the Gulls put the game away in the opening minutes of the fourth, as Davis scored her second basket and Babbitt banked in a 3-pointer for a 42-36 advantage. Babbitt finished with a game-high 16 points.

“Both teams are not very adept at peeling off points,” Hawes said. Of Babbitt’s bank shot, Hawes said, “We haven’t had a lot of banked-in shots, so maybe we were due to get a little lucky. Bryre made some big shots tonight.

“We’ll take it,” he said. “It will be harder tomorrow night at Astoria.”

Astoria won the two regular season games this year, but the Gulls have a good track record in league playoff meetings with the Fishermen.

Monday’s loss was the final game for the Indians — not just for the season, but Scappoose’s last appearance as a member of the Cowapa League. Scappoose jumps to the Class 5A level next school year.

The Indians were 3-2 after five games this season, but finished with a 2-16 record over their final 18 games. The Gulls, meanwhile, overcame a five-game losing streak midway through the season, and have won five of their last 11.

The Seaside girls basketball team tuned up for the post-season with a solid effort against the No. 4-ranked Banks Braves in a Cowapa League season finale Feb. 15 at the Gulls’ Nest.

Seaside was within nine points of the league champion Braves midway through the fourth quarter, before Banks made 4-of-6 free throws in the final 1:17 on its way to a 45-34 win. The Braves also clinched an undefeated (10-0) league season.

Seaside finishes 4-6, and will host Scappoose in a league playoff at 6 p.m. Monday.

The Braves literally limped to the finish line with a 22-2 record, as Banks is without several players lost to injuries over the second half of the season.

Junior Aspen Slifka scored 17 points to lead the Braves, who were just 16-of-60 from the field in Thursday’s win.

Bryre Babbitt celebrated Senior Night by scoring 12 points for the Gulls, who were 4-of-24 in the first half. Gretchen Hoekstre added six points off the bench.

While Sean Payton revels in Taysom Hill’s diverse skills, Matt LaFleur and Packers can only wonder what might’ve been