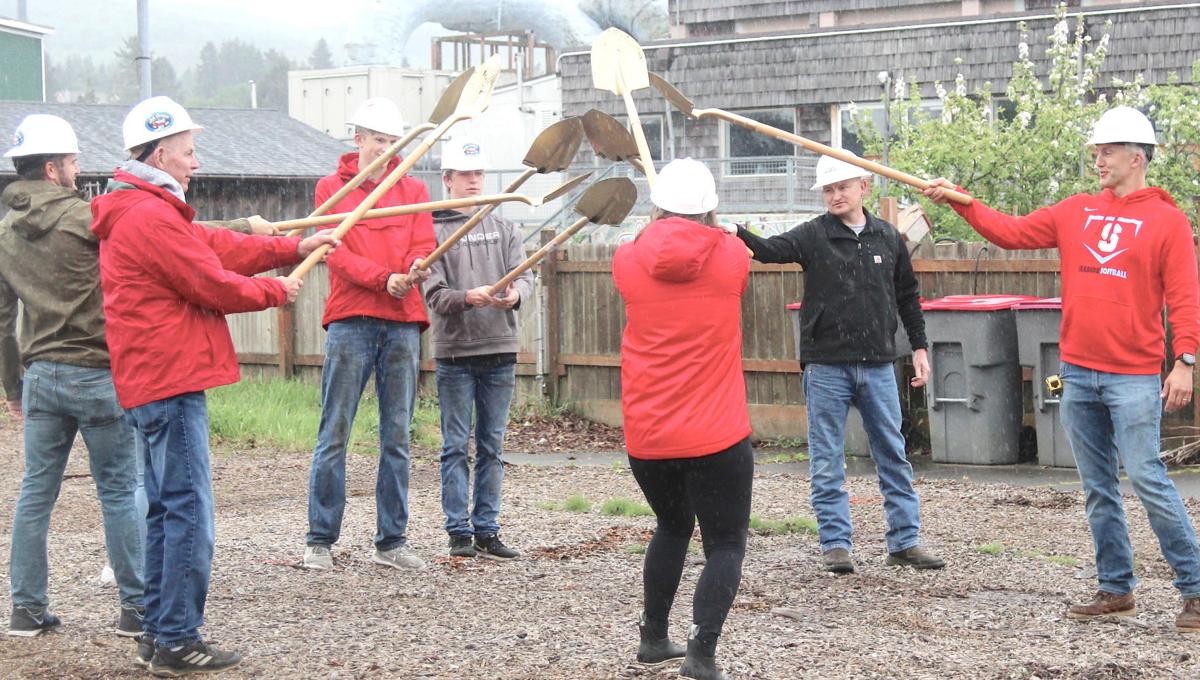 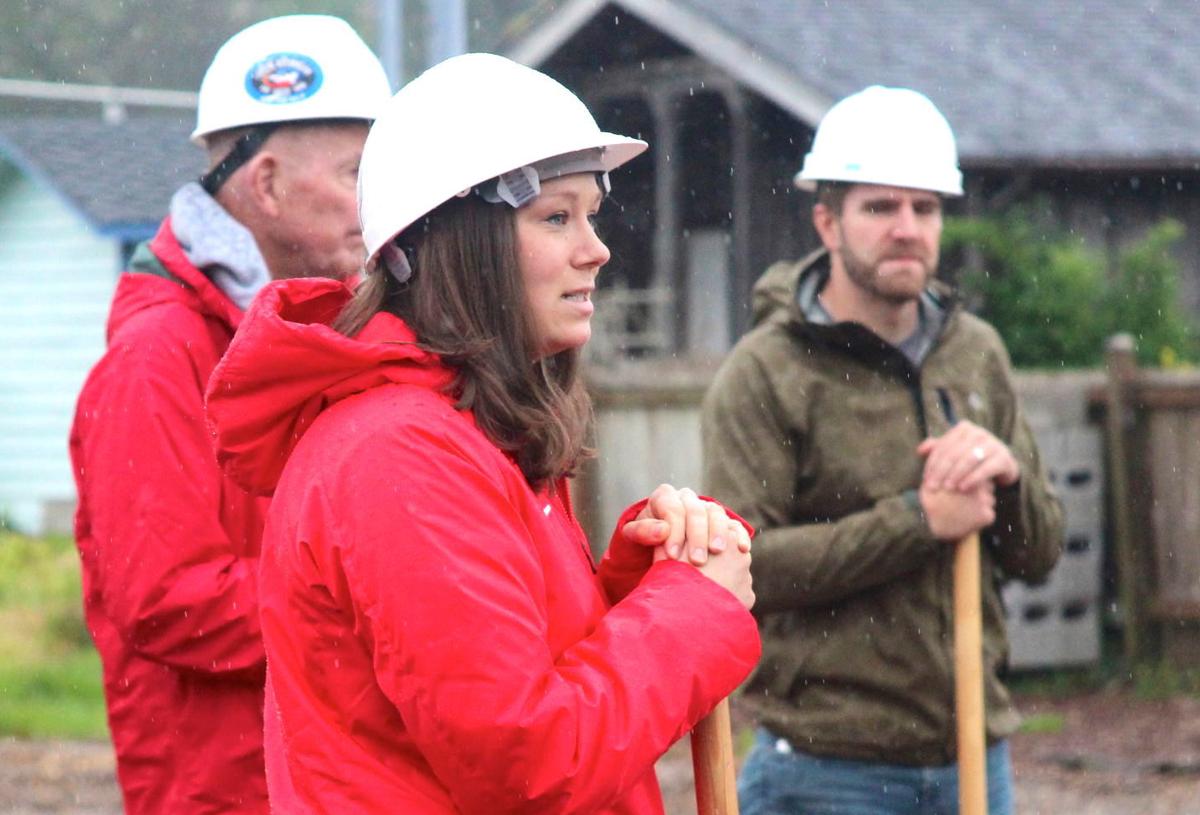 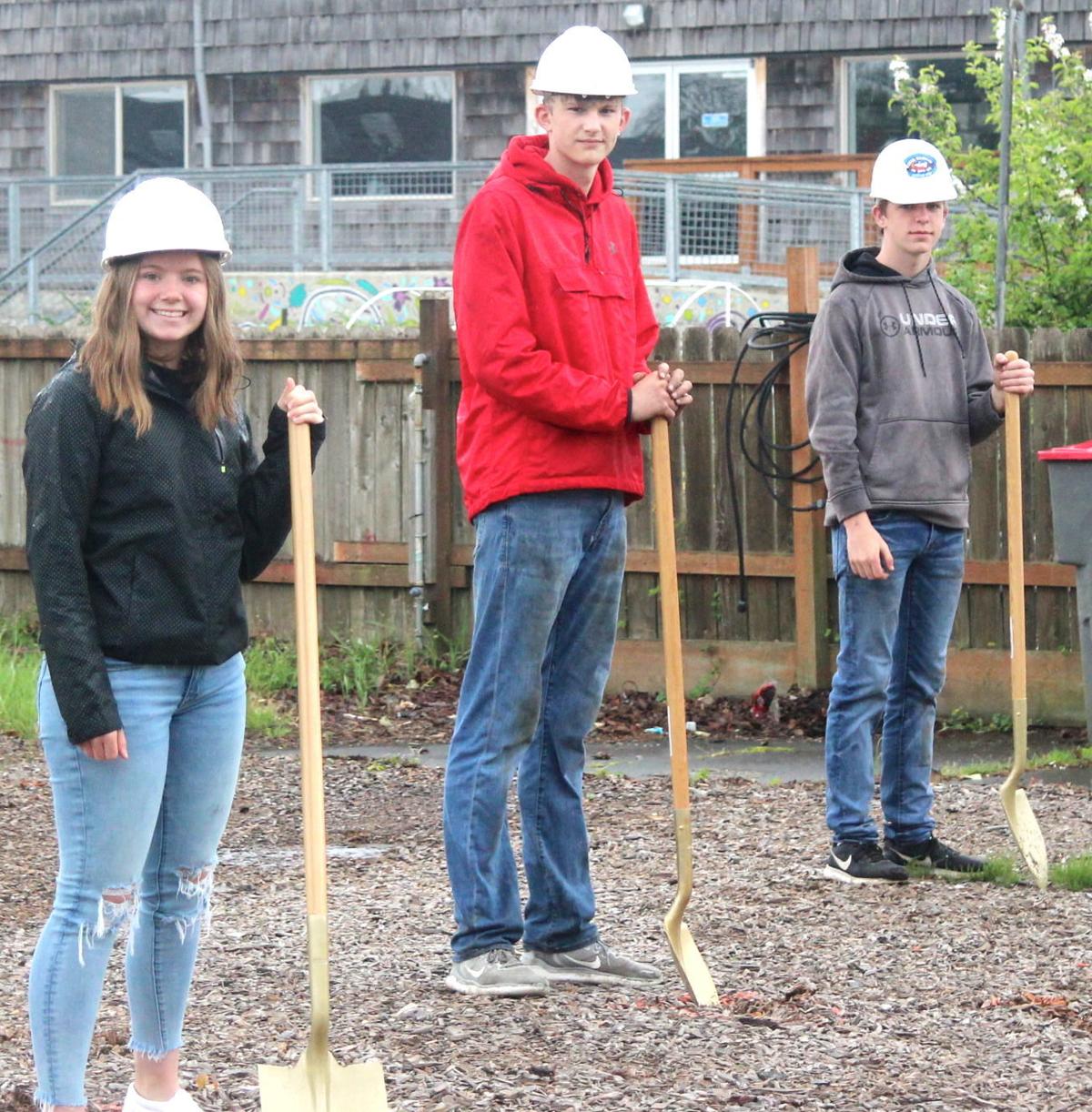 The indoor sports facility at Broadway Field is part of the Pacifica projects for Seaside student-athletes Kandice Flaigg, Cash Corder and Jarred White.

The indoor sports facility at Broadway Field is part of the Pacifica projects for Seaside student-athletes Kandice Flaigg, Cash Corder and Jarred White.

It wasn’t a bright day, but it was a bright event as some of the major players for Seaside’s new indoor batting facility at Broadway Field met for the official groundbreaking ceremony Monday morning.

Under a slight drizzle, those behind the project, along with some current Seaside athletes, tossed the first bit of dirt where the facility will eventually stand.

“It’s something we’ve been talking about for a long time, and now just finally getting the ball rolling on it,” said Seaside baseball coach Ross Knutsen. “Chris Corder (owner, Coastal Restoration) and Scott White (owner, White’s Heating and Sheet Metal) have been huge in facilitating this.”

Also in attendance were Jim Auld, a longtime volunteer with Seaside Kids, Inc., and Skyler Archibald and Levi Conner with Sunset Empire Parks and Recreation District.

Students taking part in the groundbreaking ceremony included Seaside junior softball player Kandice Flaigg and sophomore baseball players Cash Corder and Jarred White. All three are using the construction of the indoor facility as part of their Pacifica projects.

In March, Archibald and Corder received city approval for the facility for youth and high school athletes to hit year-round.

On city-owned land, the building itself will be situated directly behind the softball field (in the area beyond right field in baseball), in between Broadway Field and Broadway Middle School.

The facility can be used for baseball, softball, football and soccer, and will have space for a concession stand, restrooms and storage. Access to the facility will be from Broadway.

The building will be 56 feet by 86 feet, with a 15-foot ceiling. Corder said it is similar to the batting cage facility at Glencoe High School.

More than 300 Seaside Kids and 30 youth teams, from T-ball through high school, will have an opportunity to train in the facility.

In what would have been his first year as the Seaside varsity baseball coach, Knutsen’s team would have been at Tillamook Monday, followed by games Wednesday at Banks, and a league finale Friday at home vs. Banks, which would have served as Senior Day for the Gulls.

“It’s going to be a huge attribute for our program,” he said. “Look at what it’s done for Astoria and a lot of programs. It seems like all the successful programs have something like this.”

An indoor sports facility on the North Coast also makes sense, and could pay huge dividends, specifically for the future of Seaside baseball and softball.

“It helps build the culture,” Knutsen said. “Kids can go to the cages and get some work in. We’re usually confined to the upper gym when we have to work inside, and that’s not much of a baseball environment.

“It will be really special to have this. It will help the draw in the younger kids, too,” he said. “It will build the program from the bottom up, getting kids to come out and be a part of the program. We made due with what we had in the past, but this is going to be a game-changer.”

Although Seaside baseball and softball have struggled in recent seasons, both were showing signs of improvements.

Seaside baseball — which still has not posted a winning record in league play since 2007 — won a state play-in game last season. The Lady Gulls’ softball team had just two seniors last year, with the strength of their team at the freshmen and sophomore levels in the always-tough Cowapa League.

“Our first two weeks of practice started off strong with a hardworking group of girls who are motivated to up their game and bring our team to a more competitive level,” Garrigues said. “We are a young team, which some may see as a ‘con,’ but I see it as an opportunity to grow together in skill and team culture.”