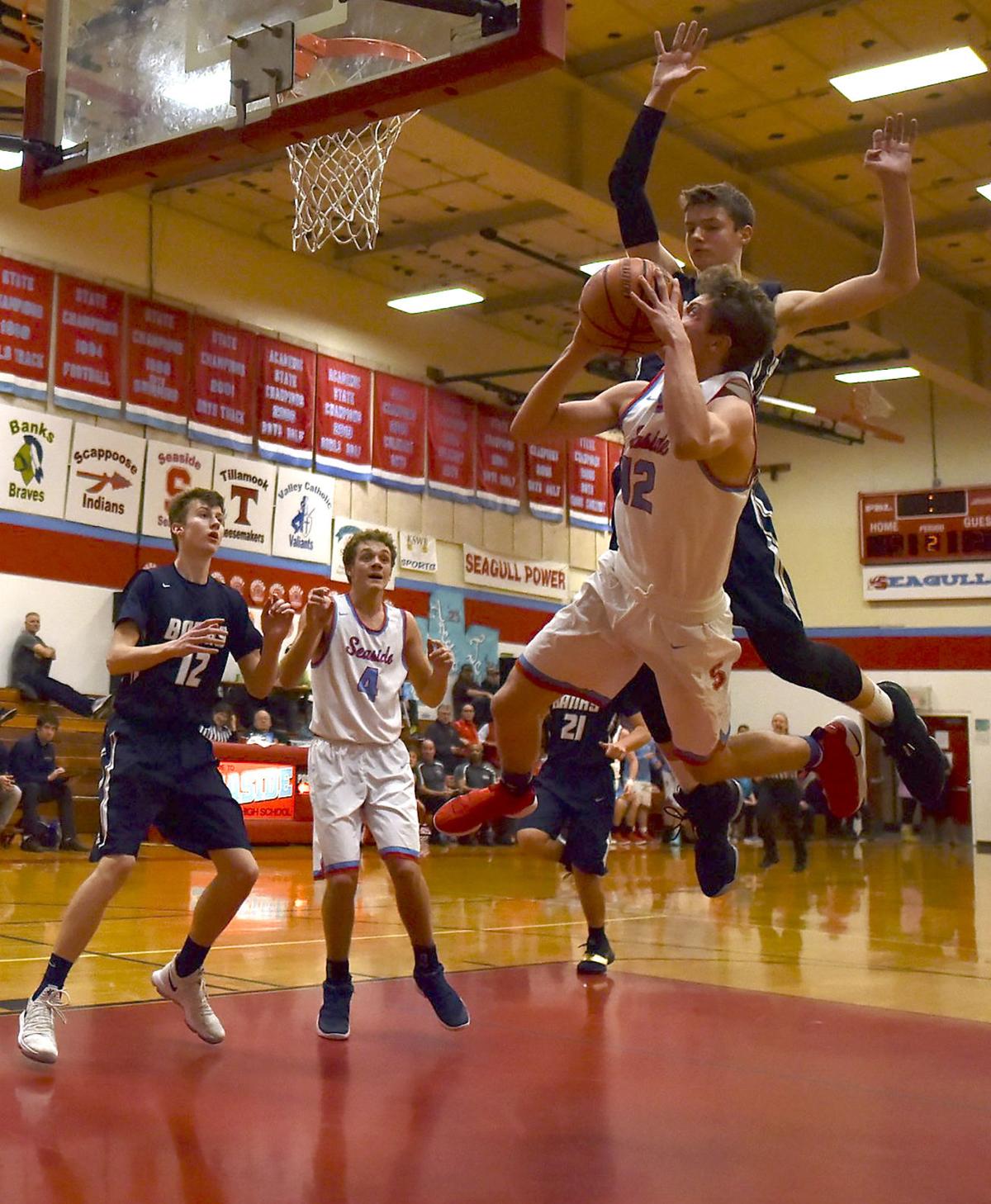 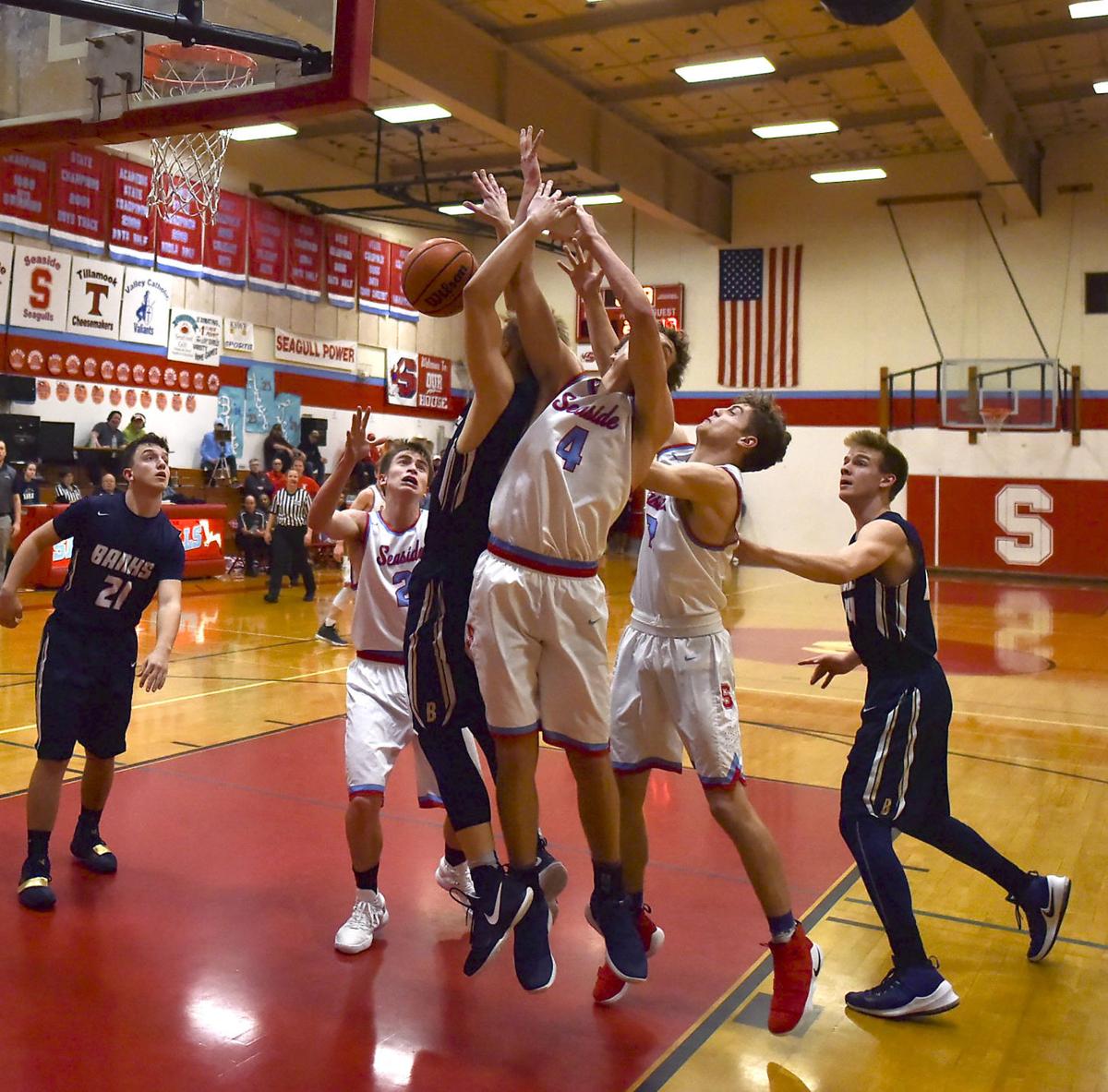 SEASIDE — Thursday night’s 66-55 victory over Banks was the very definition of a “statement win” for the Seaside Gulls.

The No. 1-ranked Braves can be right proud of their league championship — they were the best of the regular season. But the “defending state champions” label still resides in Seaside.

And that was Seaside’s statement Thursday at the Gulls’ Nest — Seaside is still the team to beat in the world of Class 4A boys basketball.

The teams could very well meet in the state championship game March 10 in Forest Grove, but the No. 2-ranked Gulls certainly left no doubt about it Thursday.

Trailing 9-1 just minutes into the game and outsized at almost every position, Seaside found the heart, the drive and the defensive tenacity to run circles around the bigger Braves.

Behind 50-45 nearing the midway point of the fourth quarter, Seaside’s Chase Januik made two free throws to make it 50-47.

The Gulls made a defensive stop at the other end, and seconds later, Brayden Johnson made the shot of the night for Seaside.

His 3-pointer at the 4:02 mark went in, and the Gulls simultaneously drew a foul underneath. Ryan Hague sank both free throws, and Seaside never trailed again.

“We haven’t had that many kids engaged in our defensive scheme in a game this year,” said Seaside coach Bill Westerholm, who picked up career win No. 256. “When everybody is on the same page, and everybody is engaged in the scheme and flying around and playing with a lot of heart … we can get a lot done. These kids tonight were all flying around.”

Which is exactly what you want from a bunch of Seagulls.

Seaside spent much of the night trying to deal with Banks’ senior Dalton Renne, who finished with a game-high 26 points, 17 in the second half.

The Gulls trailed 24-20 midway through the second quarter, when Beau Johnson hit a 3-pointer and Brayden Johnson followed with another trey for a 25-24 lead. Hague scored on a layup and Brayden Johnson drained another 3-pointer, helping Seaside post a 30-26 lead at the half.

“We did a better job in the second quarter and second half of attacking and kicking the ball out, and taking the open looks,” Westerholm said. “And it’s tough to shoot those shots against those long arms.”

Defensively, “we were trying to create opportunities to trap, get the ball out of Renne’s hands and force other kids to beat us,” he said. “Renne still had 26, but they were a hard 26. He had to make some difficult shots.”

That Brayden Johnson 3-pointer at the 4:02 mark completely turned everything in Seaside’s favor. The Braves lost their composure, and the Seaside crowd took over.

Most of whom are sophomores and juniors. That list includes Brayden Johnson, the sophomore who finished with a team-high 18 points off the bench. Januik, Hague and Payton Westerholm all scored 13 points apiece.

“Brayden Johnson was completely frantic in the last game,” coach Westerholm said. “He calmed down and hit some big shots for us.”

Another spark for the Gulls was just the fear of losing.

“We knew the scenarios of what was going to happen if we lost,” Westerholm said. “We might have had to travel for a play-in game, and I told them we’d be practicing (today) and Monday. That might have lit a fire under ‘em.”

The Braves “tried to be physical with us, and it bothered us at times,” he said. “But we kept battling, and things started going our way. Now we have Friday and Monday off, and we’ll condition the heck out of ‘em.”

Seaside will not play again until March 2 or 3, a home game in the Sweet 16 playoffs.

Yes, the Mountain West is looking into eight-game football season. But will it actually happen?