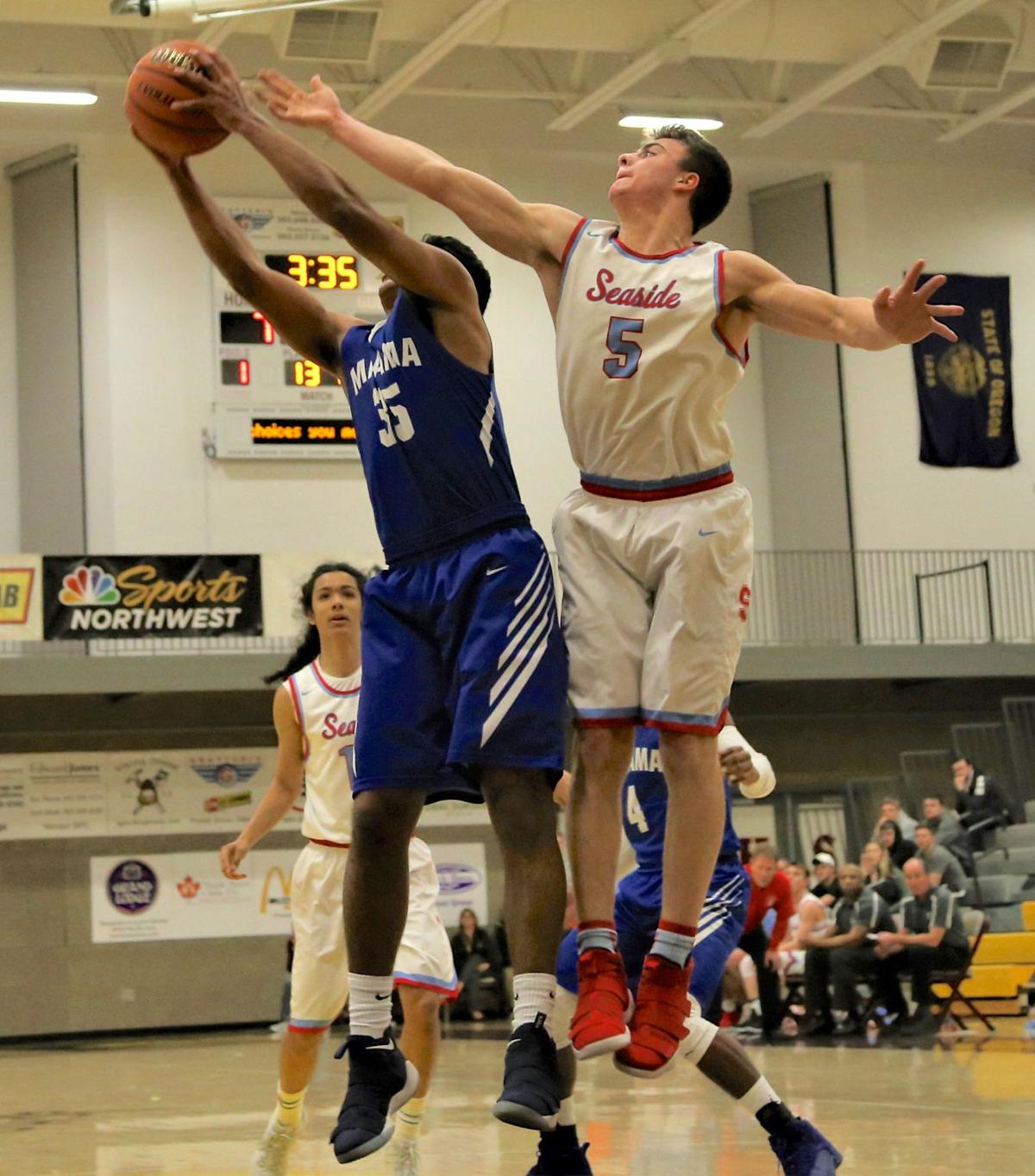 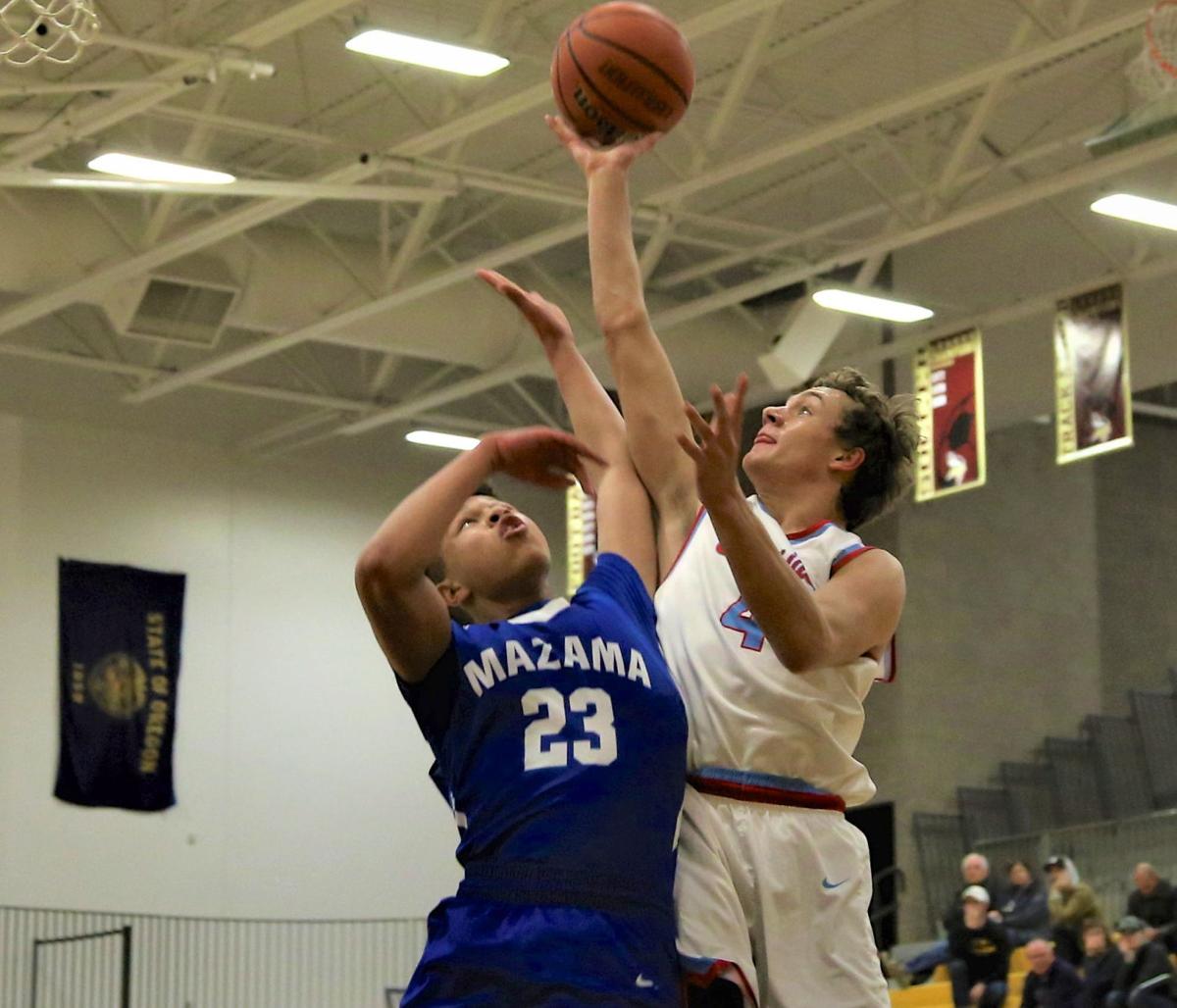 Ryan Hague of Seaside rises above Mazama's Javon Hall for a shot. Hague finished with a team-high 13 points. 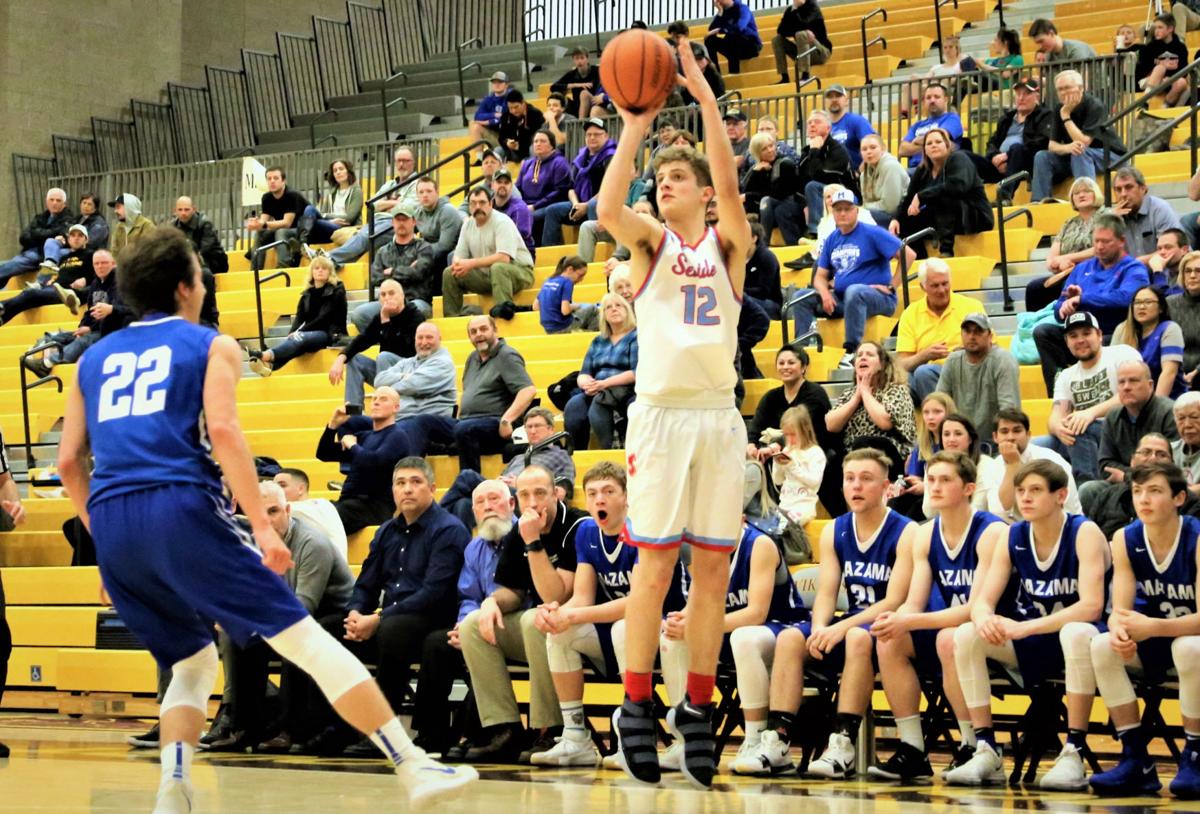 Ryan Hague of Seaside rises above Mazama's Javon Hall for a shot. Hague finished with a team-high 13 points.

FOREST GROVE — The countdown to a championship is on for the Seaside boys basketball team.

The Gulls will play three games in three days, and they took step one late Thursday night in Forest Grove, where they cruised to a 51-44 win over Mazama in a Class 4A quarterfinal game at Forest Grove High School.

One down, two to go.

Seaside struggled offensively for a half, then pulled away in the third quarter and held off a late challenge by the Vikings, as all eyes were on the defending state champions in Thursday’s last game.

“We pulled away there in the second half,” said Seaside coach Bill Westerholm. “We had some opportunities to put it away earlier at the free throw line, but we didn’t shoot very well from the line in the fourth. We were 8-for-19.

“But just from the fact that we’re moving on, I’m pleased. We had some different kids step up at different times.”

For the third year in a row, it’s on to the Final Four for Seaside, which will play Friday against Newport, with another late tip-off (8:15 p.m.). The winner will face either Banks or Valley Catholic in Saturday’s state championship game, an 8:30 p.m. start at Forest Grove High School.

The Gulls split two games with Newport in the regular season. The Cubs scored a rare win at Seaside in the Holiday Classic, before the Gulls got revenge with a 64-63 win at Newport Jan. 5.

As for Thursday’s win, the Gulls picked up where they left off following last week’s 43-32 win over Gladstone, involving themselves in a low-scoring, defensive battle.

An offensive rebound basket by Colton Carter gave Seaside an early 9-2 lead, and Chase Januik’s 3-pointer to end the first quarter had Seaside in front, 12-6.

Even fewer points in the second period ended with the Gulls leading at halftime, 20-10.

Carter added another score and Januik’s drive to the hoop in the closing seconds gave Seaside the 10-point lead.

The offense ran a little smoother for the Gulls in the second half.

A jump shot by Ryan Hague, a 3-pointer from Beau Johnson and a Januik jumper gave Seaside a 27-16 lead midway through the third quarter.

A triple from Brayden Johnson and a three-point play the hard way by Payton Westerholm at the 2:00 mark basically put the game away, at 35-20. Mazama made a late run in the fourth quarter, but never threatened the Seaside lead.

Hague led Seaside with 13 points. Westerholm fought off an illness this week (including a 102-degree temperature) to score 12 points, and Januik added 11. The Vikings finished 2-for-17 from the 3-point line.

“Payton didn’t make a practice all week,” said Bill, his dad and coach. “His temperature finally broke (Wednesday) night — got it down to 98.6. He saw 23 minutes tonight. Colton did a good job off the bench, and Rafi (Sibony) did a good job of spelling Payton, too.”

Seaside improves to 20-5 overall, for its third straight 20-win season.

The Cowapa League will have three teams in the Final Four for the second year in a row.

Banks advanced with a 46-38 win over Sisters, and Valley Catholic defeated La Grande, 62-39. The Braves and Valiants play each other in Friday’s first semifinal (6:30 p.m.), clinching the fourth straight year that the Cowapa League will have a team in the championship game.

“It’s the rubber match with Newport,” coach Westerholm said. “We watched them against Marshfield, and they played well. (Kye) Blaser is one of the better guards in the state, and (Justin) Plechaty really shoots well.

“But it says a lot about the Cowapa League, to have three teams in the Final Four.”