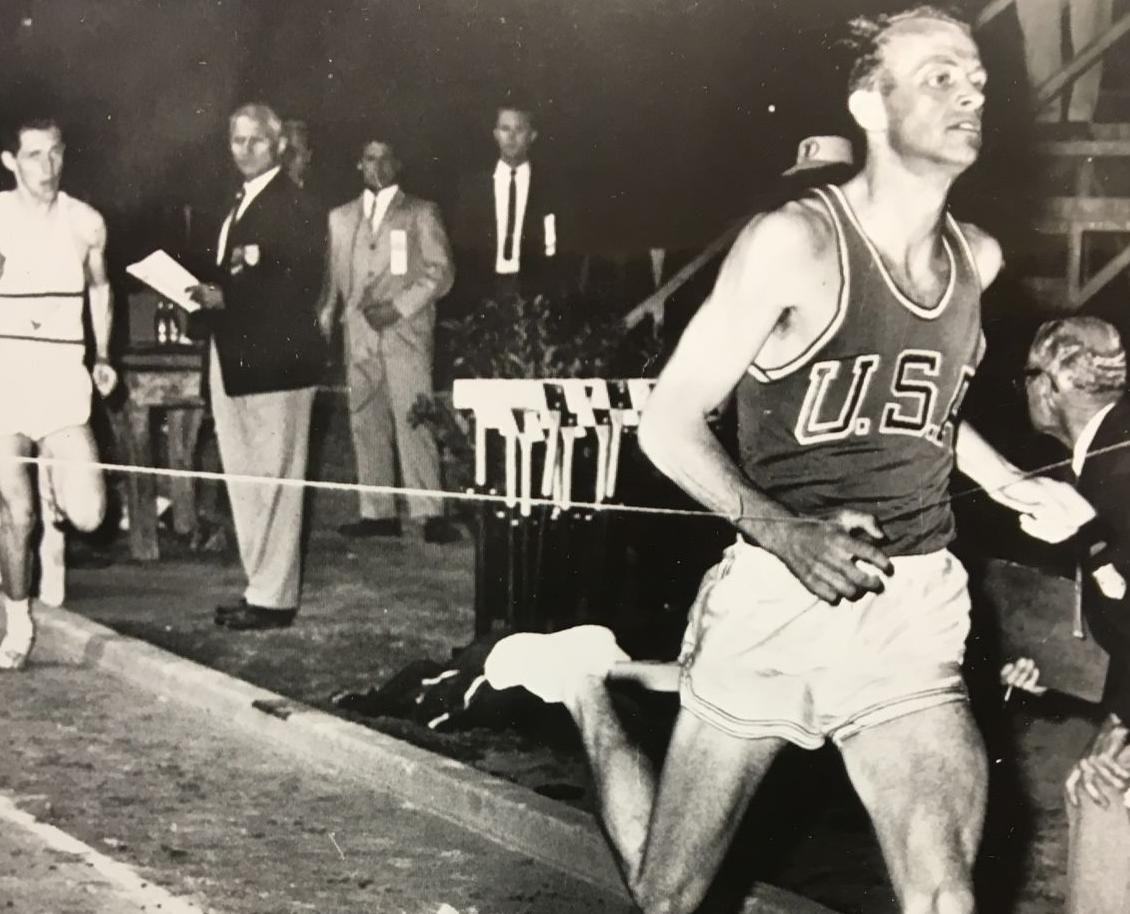 The 1961 Compton Mile showing Jim Grelle winning and with Tommy Sullivan 0.8 seconds behind in a U.S. high school and world junior record. 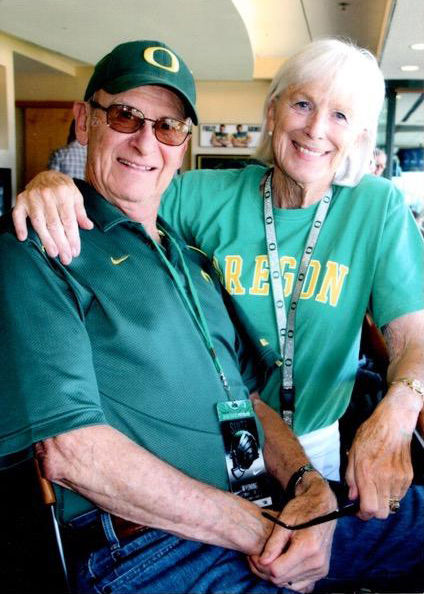 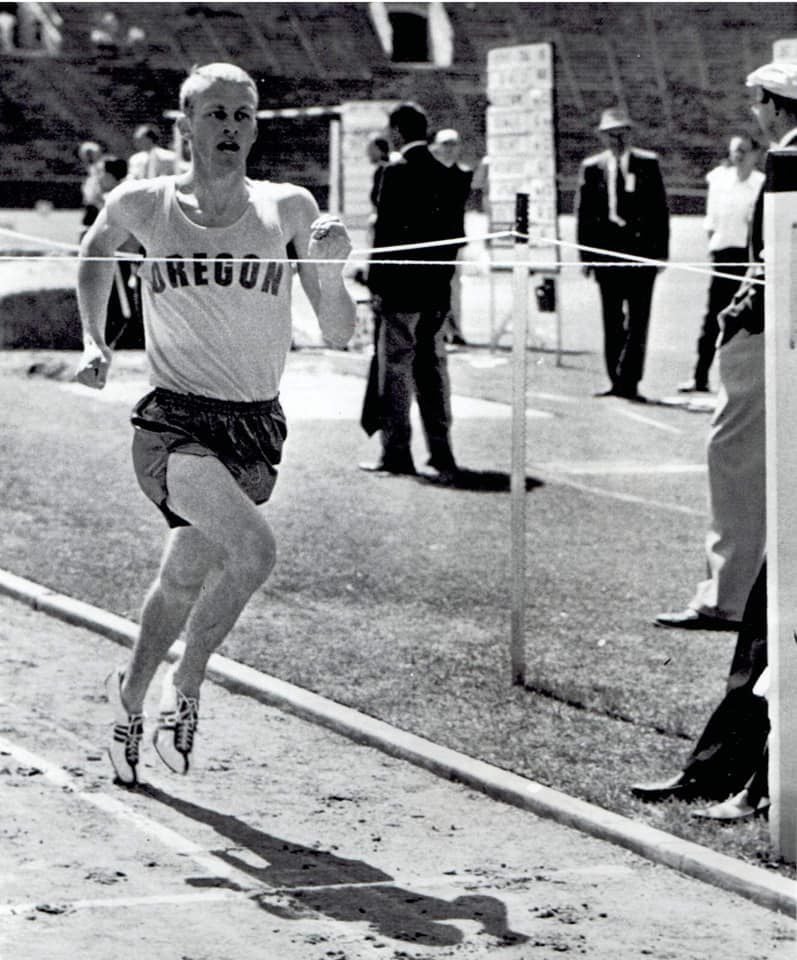 Jim Grelle, who was teammates with Phil Knight and coached by Bill Bowerman, was the NCAA mile champion as a senior in 1959. 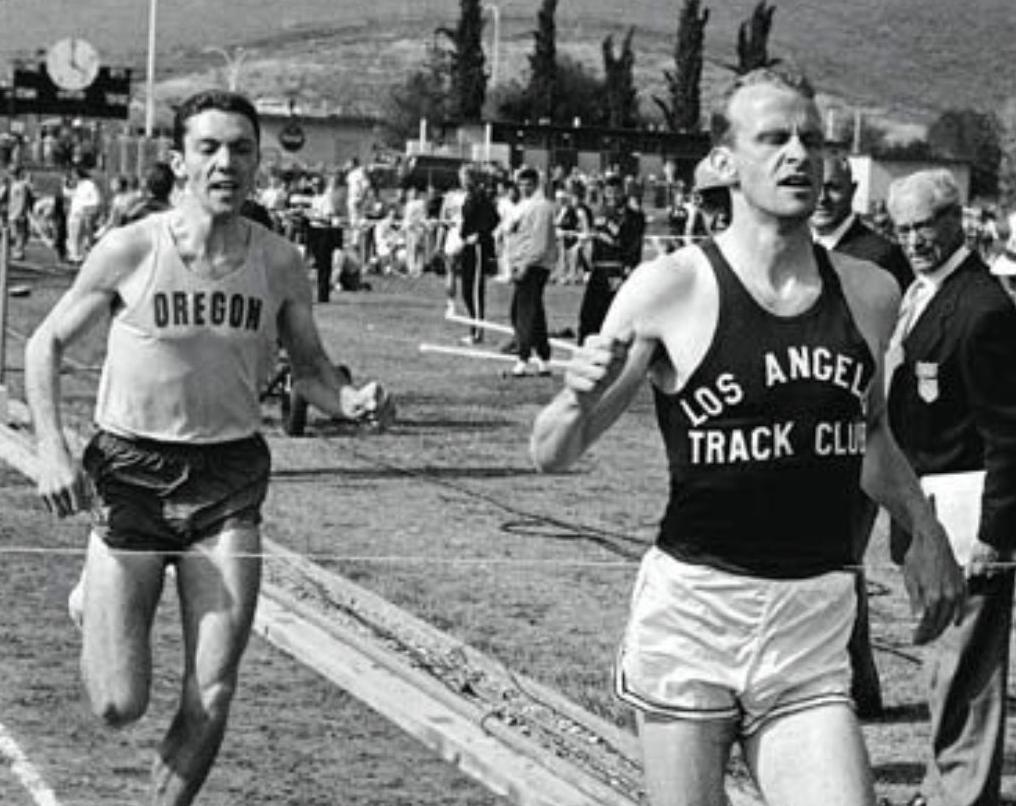 Jim Grelle becomes the fourth US athlete to run under four minutes for the mile Mount SAC Relays in 1962. 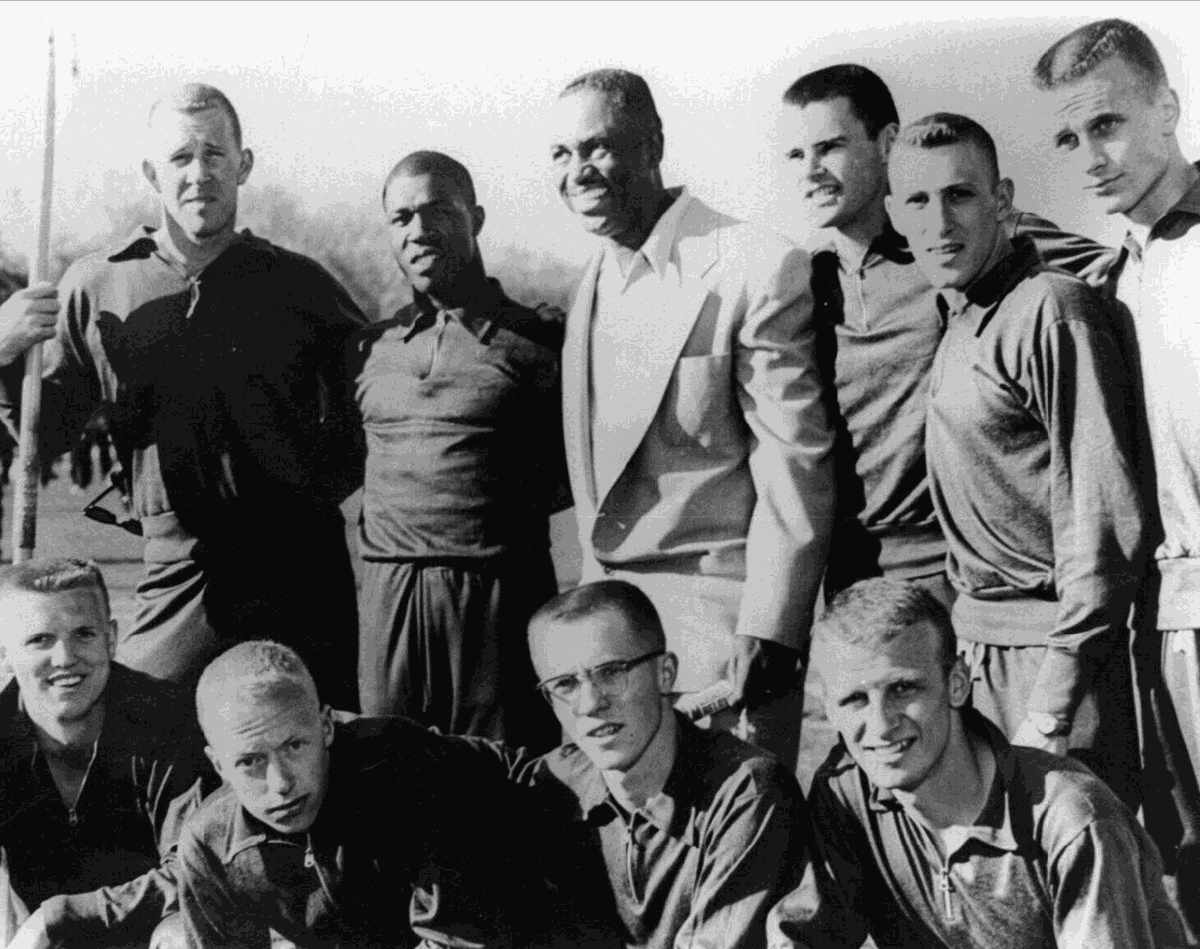 The 1961 Compton Mile showing Jim Grelle winning and with Tommy Sullivan 0.8 seconds behind in a U.S. high school and world junior record.

Jim Grelle, who was teammates with Phil Knight and coached by Bill Bowerman, was the NCAA mile champion as a senior in 1959.

Jim Grelle becomes the fourth US athlete to run under four minutes for the mile Mount SAC Relays in 1962.

The world of track and field athletics is deeply saddened by the news that Olympian, James Edward “Jim” Grelle, the fourth American to run under four minutes for the mile and a true running pioneer, passed peacefully on June 13 at the age of 83. He had been under home hospice care for some months and was surrounded by close family.

During his illustrious career, Grelle set national records in the mile with a time of 3:55.4 in 1965, the indoor mile with 4:03.6 in 1961 and in the two-mile, a distance that he rarely ran, but in 1966 tied with Jim Ryun to record a time of 8:25.2. He was one of the first track and field athletes to have a running career after college and benefited from being coached by two world-renowned and innovative running coaches, Bill Bowerman and Mihály Iglói.

In track and field athletics, the 1950s and 1960s was the time for the mile, inspired by Roger Bannister’s breaking the four-minute barrier in May 1954. It was only eight years later, in 1962, that Grelle ran his first sub-four-minute mile. Such was Grelle’s performance abilities that he raced the mile often and by 1967 had broken the four-minute barrier on a prodigious 21 occasions, the most “sub-fours” of any athlete in the world at that time. He was part of a golden era for American miling when, in 1962, six of the top 10 milers in the world were Americans. This global success has never been matched.

Grelle was born in Portland on Sept. 30, 1936, and growing up would play with running, setting himself against imagined adversaries, around and within his neighborhood. But it was in 1952, as a freshman at Lincoln High School, that Grelle really discovered he could run competitively, despite never having previously heard of cross-country running.

On the track, he chose the 880-yard run and ran well but, in that era, a freshman could not run for varsity, or in the state championships. In his sophomore year he recalls that he was, “third or fourth in the 880 at state.” His junior year saw him improve to take his first state title at the 880, in “about 2:01.” He successfully defended his state title in 1955, his senior year, reducing the state meet record time from 1:59.9, down to 1:58.0. The fourth-place finisher was a Cleveland High School senior and later co-founder of Nike, Phil Knight.

Oregon’s renowned coach Bill Bowerman recruited Grelle to run at the University of Oregon, where he was moved, unwillingly at first, to racing the mile. As an Oregon Duck, he quickly developed, having many well-known runners and track and field athletes around him, including, as a three-year teammate and fraternity brother, Knight. Grelle learned through his own experience that Bowerman, “really knew how to get people ready for May and June. All my best races, the whole four years of college, were at the national championships.”

When the University of Oregon milers finished first or second, or both, in the NCAA championships during nine straight seasons, Grelle played a significant part in that heritage. He was called the most durable of the Ducks’ string of distance standouts. He was at his best in the big meets, placing second in the 1957 and 1958 NCAA championships mile, both times behind Ron Delany, the 1956 Olympic 1,500-meter champion. In 1959, he crowned his collegiate career by winning the NCAA championships mile in 4:03.9.

In 1960, Grelle won the national championship’s 1,500-meter and later qualified, with a second-place at the U.S. Olympic trials in Palo Alto for the U.S. Olympic team to compete in the Rome Olympic Games. In this introduction to the Olympic cauldron, he made the nine-man 1,500 final by placing second in his heat in 3:43.5. The final, however, was intense from the gun as Herb Elliott of Australia front ran to the title and a 3:35.6 world record performance. Grelle finished in eighth place, with 3:45 and set his sights firmly on future seasons and the 1964 Olympic Games.

Following graduation from Oregon, Grelle had remained training in Eugene with Bill Bowerman but then in 1961 he decided to make a move to Los Angeles, the new epicenter for the mile. He joined the Los Angeles Track Club to be trained under the secretive and punishing regime of Hungarian coach Iglói. According to author and fellow Oregon runner Kenny Moore, Iglói welcomed Grelle with 35 quarters in his first workout.

It is difficult to imagine, in these days of sponsored professional track and field athletes, what it must have been like to train so intensely and at such a volume twice a day, each day and work. Grelle absorbed the training and was still able to hold down a demanding, full-time job with Colgate-Palmolive. And it proved productive when, in 1962, Iglói took his Los Angeles Track Club for a fabled tour of European meets, with Grelle running a personal best 3:56.7 in the mile. “Everybody said the American runner is lazy, don’t work,” Iglói told Sports Illustrated. “Now the American distance runner is the best in the world.”

Going into the 1964 U.S. Olympic team trials, Grelle was confident in his abilities but perhaps overlooked the threat from a precocious 17-year-old high schooler, Jim Ryun. In the closest of finishes for the first four athletes, Dyrol Burleson won in 3:41.2, followed by Tom O’Hara (3:41.5), and Ryun just edged out Grelle to take third place, both timed at 3:41.9 but leaving Grelle in a nonqualifying fourth place. With typical good humor and acceptance, he refocused his season and made a move back to Portland.

He started competing for Portland’s famed Multnomah Athletic Club and, now self-coached, continued to have competitive success up to and including the 1967 season, when he ran his 21st and final sub-four-minute mile. He had been coached by two of the wold’s best coaches and when he returned to Portland in 1965, it was natural that he would begin coaching others as well as himself. He started coaching at the University of Portland, where he continued until 1972.

When people speak of Grelle it is with a clear memory.

His son, Jim, recalls, “It was always said and said by all, that he enjoyed his running, competing against and the company of his fellow competitors. My father had a laser focus. He was humble, gracious, gregarious and he took what he had from running and used it in his life. There was this balance of instruction and a quiet voice.”

A letter from a former competitor, Tom Sullivan, received by Jim and Jean Grelle in March of this year is perhaps illustrative of the stature and essential nature of the man.

“On June 2, 1961, I was invited out from Chicago to run in the prestigious Compton Invitational Track and Field Meet in Compton, California. I was an 18-year-old high school student who had the top prep half-mile and mile times in the country at that time. ... I surprised my self when I shot into the lead of the eight other runners in the race at the gun lap and could not believe I was still leading coming off the final turn with 100 meters to go. That is when you passed me and I still remember your encouraging words as you passed me. You said something like: ‘Come on Tommy, you can do it, follow me.’ We both ran close together and you beat me by only 0.8 seconds.

“I couldn’t figure out why all the reporters and officials hovered around me and not you at the finish line,” Sullivan continued. “One reporter said: ‘Do you know what your time was?’ It was 4:03.5. I broke the national high school record by 5.4 seconds and also claimed the world junior (under 19 years of age) mile record. .... I will always remember that evening, your sportsmanship assistance and encouragement to me.”

In retirement, one of Grelle’s favorite weekly routines was meeting with a group of former runners and coaches “about my age and a little bit younger” for coffee. The group meets on Saturday mornings and conversation generally revolves around track and running.

Grelle is survived by his wife, Jean, and their two children, Jim and Leslie, and two grandchildren. A celebration of life will be scheduled at a later date.

Get to know the Wisconsin Badgers' 2021 football recruiting class