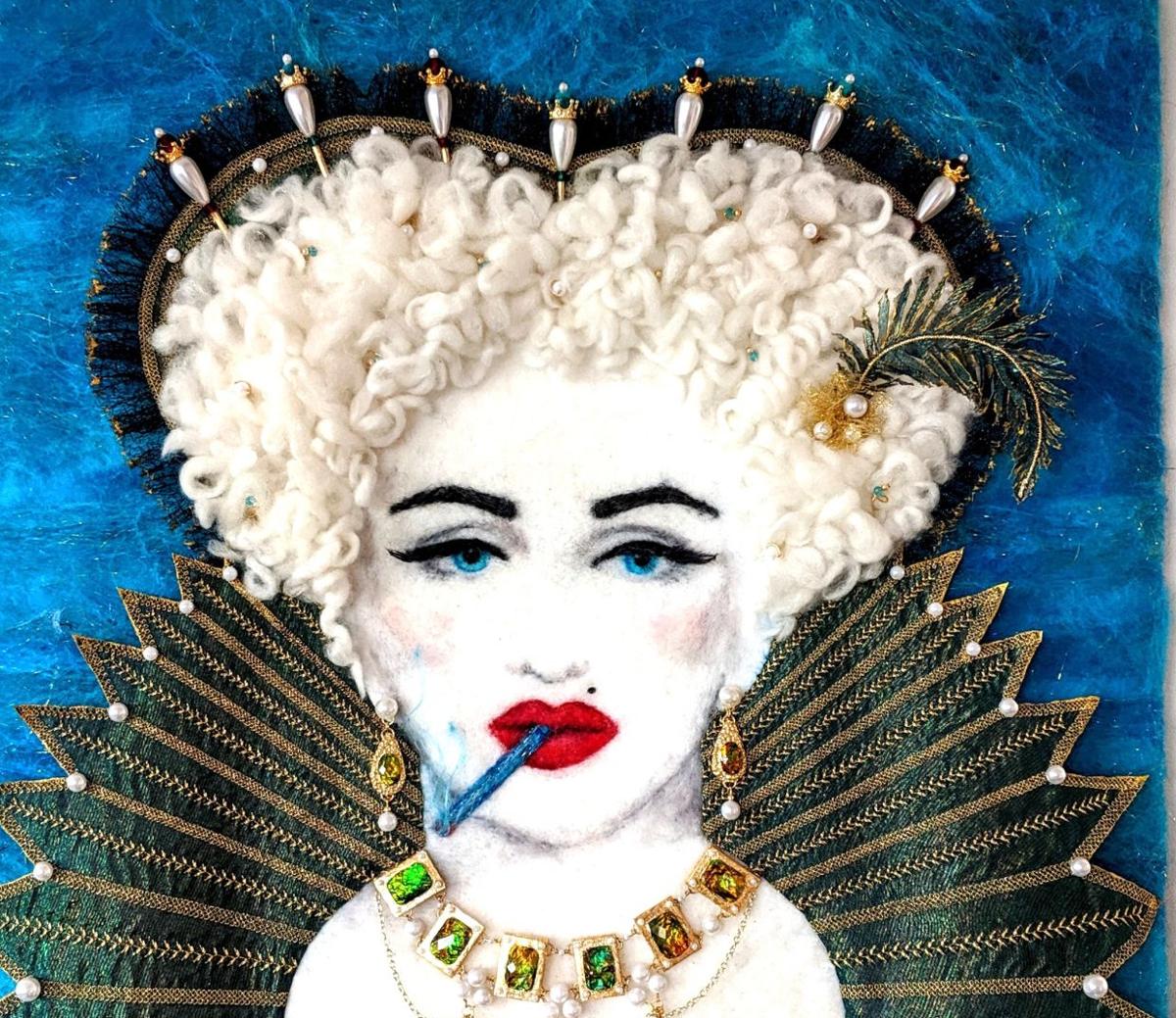 Leicha Virgin, one of a series by Robin Montero. 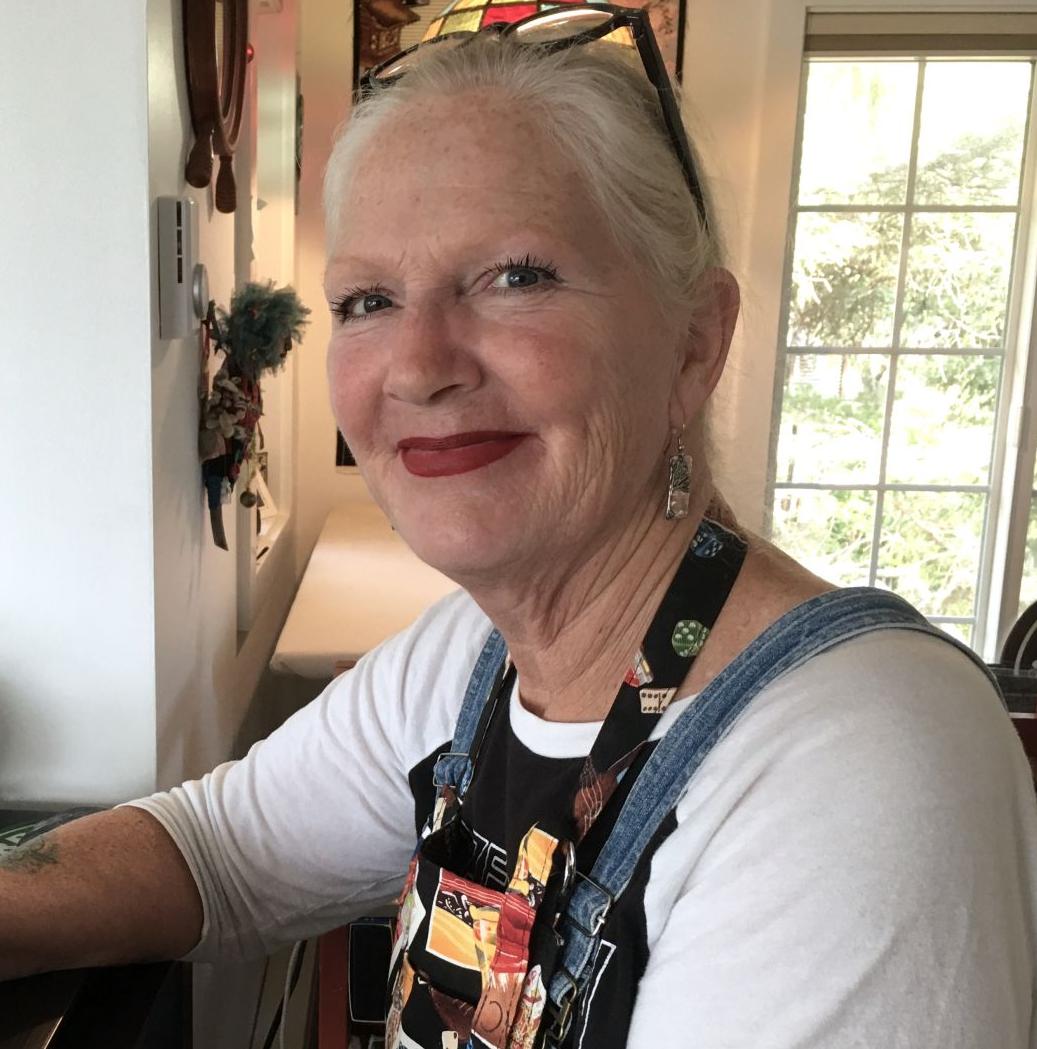 Robin Montero enjoys an awesome view of the Cove from her Seaside artist’s studio. 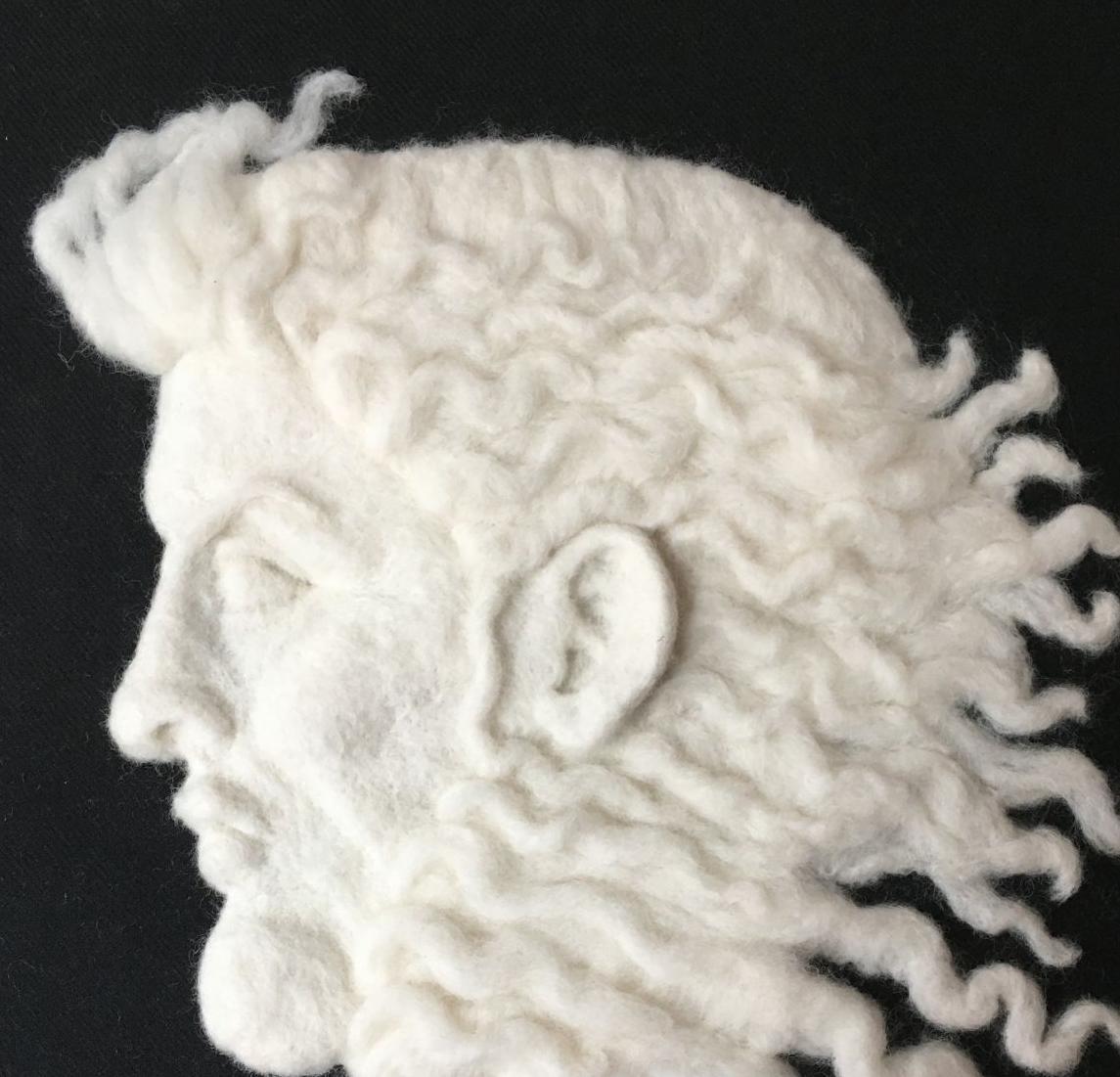 Poseidon, a felted sculpture in bas relief created by Montero, is one of her signature works.

Leicha Virgin, one of a series by Robin Montero.

Robin Montero enjoys an awesome view of the Cove from her Seaside artist’s studio.

Poseidon, a felted sculpture in bas relief created by Montero, is one of her signature works.

Robin Montero has been making art all her life and has been a costume designer for a long time.

“I started doing costumes for Shoreline High School in Washington,” she said. “I also worked for a sign company for 25 years. Starbucks was a client.”

In 2006, the Fifth Avenue Theatre Company in Seattle hired her to design costumes. She left that post in June 2018. While working in Seattle as a costume designer, Montero and her sister-in-law Tita opened The Montero Sisters Fabric & Creative Inspiration shop in Seaside on Holladay Drive. They closed that store in 2007.

All along, Montero developed her fabric art.

A Seaside resident since 2001, for the past 10 years, she’s lived in a unique setting with a stunning view of the Cove.

“I love looking outside and seeing nature, not development or concrete,” she said during an interview in her artist’s aerie, a recent addition to her Al Hansen house. “I see eagles, I see elk, I see herons. Every day is a little different.”

“Why not?” Montero said. “They’re entertaining and they’re bigger than life.”

So far, there are five.

Montero makes the felt herself. It’s a process. The drag queens are all sewn. There is no glue. And what they’re wearing, like hats and jewelry, well, Montero makes all their ornamentation, too.

The best place to see the queens is SunRose Gallery on Broadway in Seaside where they are for sale, along with other items handcrafted by Montero.

“I have learned to expect the unexpected when it comes to my SunRose artists, and Robin’s theme of needle felted drag queens certainly fit the bill!” said Cathy Tippin. “Knowing how meticulous her craftsmanship is, how thoroughly she researches and plans out each design, how she prepares the wool and painstakingly sculpts her artistic vision in 3-D, I knew her show would be different and amazing, and she lived up to that.”

“They move in for a close look and then I see their faces light up in amused fascination as they realize how creatively each panel expounds on their clever drag names,” Tippin said. “Misty Meanor” and her stylized police hat; “Lucky Charm” portrayed in the lucky Asian colors gold, green and red; her earring, the number 8; lucky flower cherry blossoms for her bodice; and of course all of the queens are ‘dragging’ on a smoldering cigarette.”

Tippin said successful art elicits emotion. “That’s how we connect to it. Over all the years we have represented Robin, (Sunrose owner) Ray (Coffey) and I have witnessed amazing connections with her art, because of her thoughtful imagination and amazing felting skills. We’re happy she chooses to show her felted sculptures and jewelry with us.”

And then there is Poseidon.

“He’s a handsome devil, isn’t he?” Montero said. “Poseidon was my first sculptural wool-felting piece. I had needle-felted a flat face before, but wanted to push the boundaries of what I didn’t know. I love the depth of bas relief. I wanted to see if I could felt a man that represented the ocean.”

She said she originally thought of doing Neptune and was trying to incorporate the associated iconic trident, but it just didn’t draw out well.

“Greek Poseidon is essentially the same god as Neptune,” Montero said, “Most folks don’t necessarily associate him with the trident.”

She said he was a challenge because she didn’t know how nor could find a technique on how to achieve a 3-D bas relief look.

“Flying by the seat of my pants, I just let my eyes and fingers do the work in manipulating a wet felted piece I made to bring him to life,” Montero said. “Working with felt, fiber and a barbed needle is not even remotely like working with clay or wax where you can build your layers with an extra pinch of medium or chipping away at a block of marble. In fiber, you have to visualize the depth and projection to achieve an anatomically correct balance and begin the process from the back of the subject and work forward. When looking from the side of the piece it would be a failure to have the eyebrow bone project out further than the cheek or ear. That ear! Ah, dimensional details.”

She said creating Poseidon taught her patience and new sculptural techniques she would have never obtained if she chose to play it safe.

“Life’s too short to be boring,” Montero said.

Brooklyn Beckham gets siblings inked onto his fingers