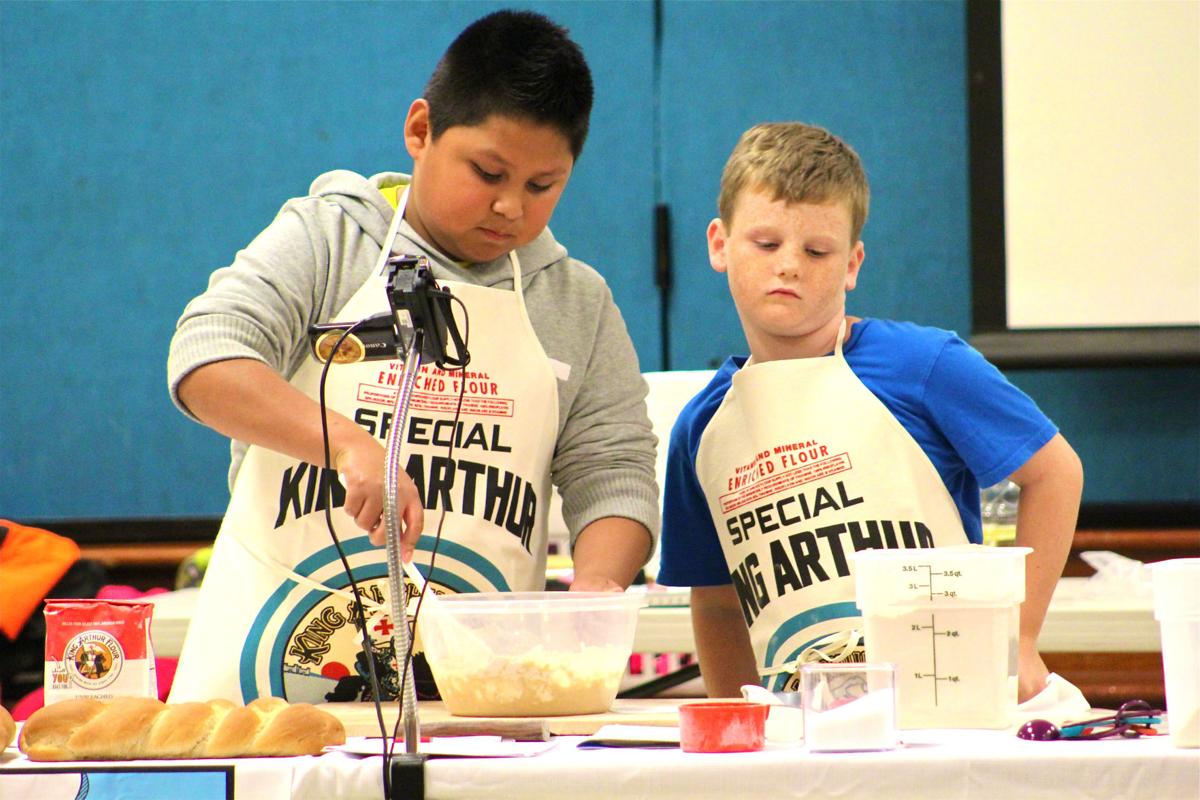 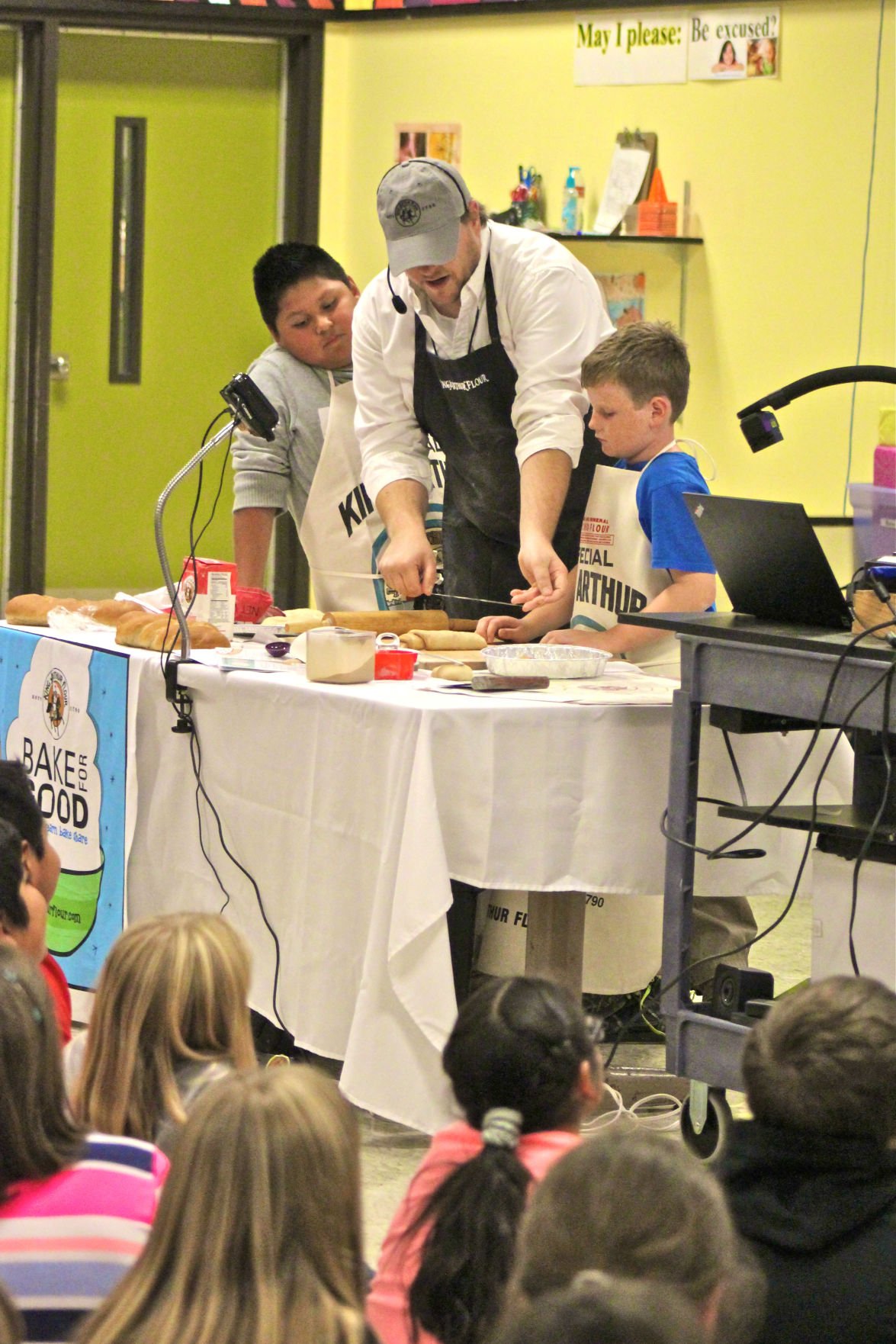 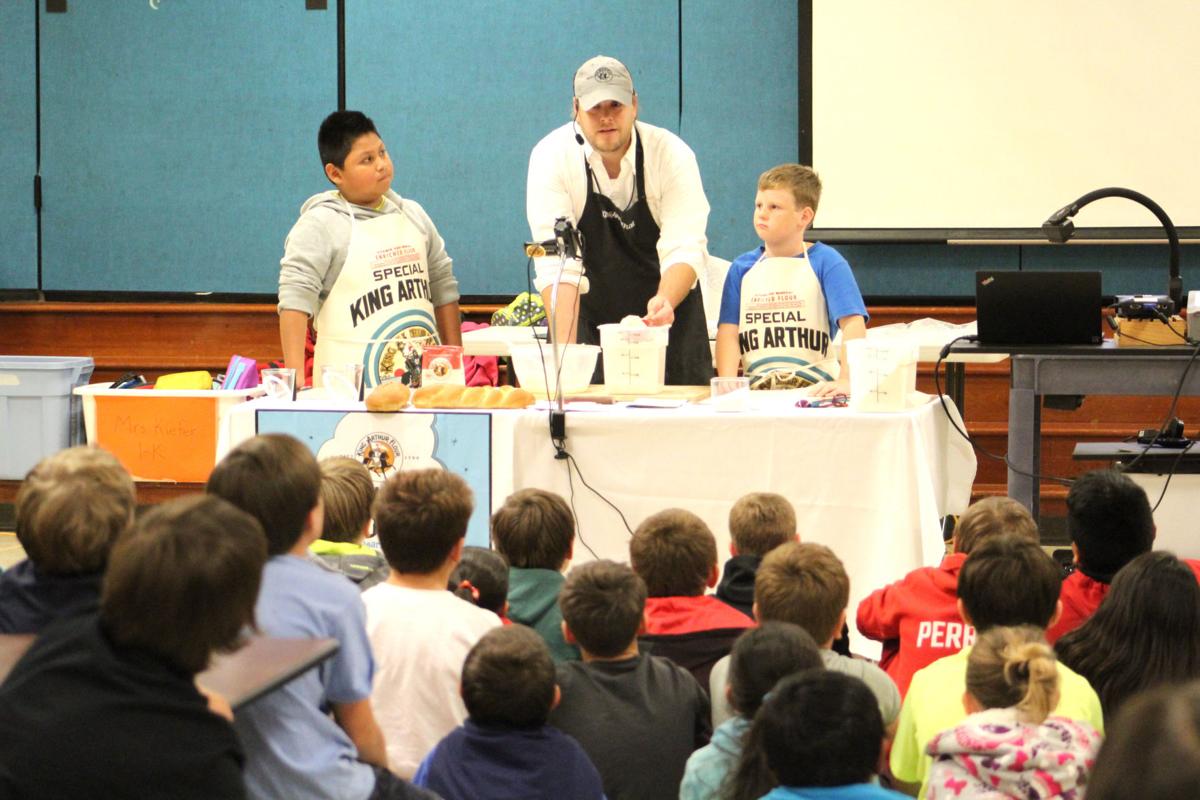 During a presentation Sept. 29 in the school’s cafeteria, instructor Nate Sandel mixed simple science and math lessons with a lively baking demonstration that entertained a large group of fourth- and fifth-graders and prepared them to try the activity on their own. Each student was sent home with a baking kit — containing flour, yeast and a dough scraper — to bake two loaves of bread, one to enjoy with their family and another to bring back the following week to be donated to Manna House Food Pantry.

Those are the three main goals of the Bake For Good Kids program: learning, baking and sharing.

It starts with learning.

While Sandel showed the group how to make dough with the help of two volunteers, fifth-graders Andrew Dalby and Alexis Martinez, he explained the chemical reactions that turn individual ingredients, such as flour, yeast and water, into a fluffy loaf of bread. He incorporated practical application of some the students’ math skills, like working with fractions and measurements.

Sandel then showed students how to manipulate and shape the dough to create a variety of baked goods, from braided loaves of bread to cinnamon rolls and pizza crust. The demonstrator did everything by hand, explaining to students, “artisan bread, which is very, very cool, is made by using your hands, not a machine.”

To finish the presentation, he showed the students how tossing a pizza can replace a rolling pin, as centrifugal force pulls the dough to the outside, creating a wide, thin surface.

“We try to make it as exciting as possible,” Sandel said of the demonstration.

Sandel, who previously worked for the Columbia River Maritime Museum, still lives in Astoria, but he travels throughout the northwest states, giving demonstrations at schools along with three other national King Arthur Flour program instructors. Because the flour company donates the ingredients and the instructor’s time, the program is in high demand, he said.

He is able to return to a given school only every so often. The last time he was in Seaside was two years ago.

Fourth-grade teacher Dan VanNortwick hopes to bring back the program every year so each student passing through Seaside Heights can participate either as a fourth- or fifth-grader. He appreciates that the program lets the students apply practical science and math in an interactive way.

Most importantly, VanNortwick said, “it helps the kids to give back to the community.”

On Oct. 5, representatives from Manna House Food Pantry — a Clatsop Community Action Regional Food Bank site ran out of Lighthouse Christian Church in Warrenton — stopped by the school to collect more than 70 loaves of bread prepared by the students.

Sandel said the program is designed to encourage the students to be good stewards of their community by putting the extra loaves to use. During the program’s life span, various school have donated the bread to an approved food pantry or nonprofit organization – one that accepts homemade foods — or used it for a community dinner at the school. In 2013, Seaside Heights donated the bread to Helping Hands Reentry Outreach Centers.