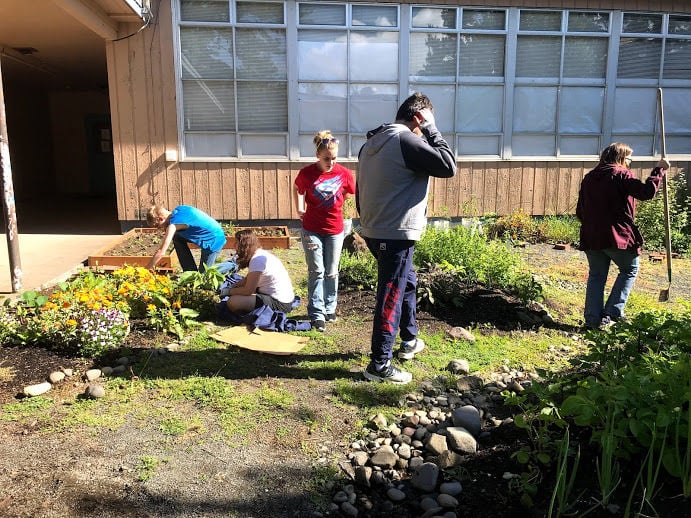 Seaside High School students tend to the campus' garden, which has been recently renovated by teacher Becky Botkins and her class and will be used by the school's new garden club. 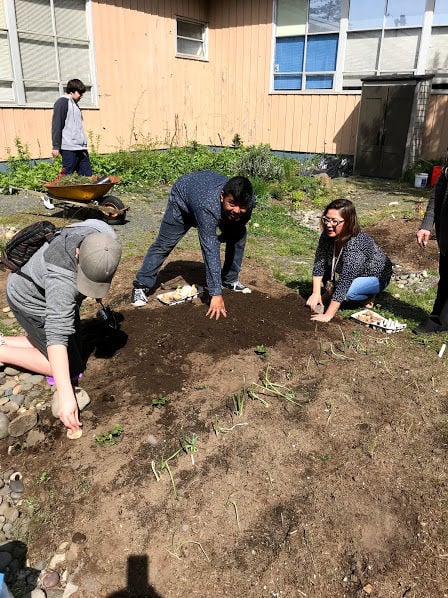 Seaside High School students tend to the campus' garden, which has been recently renovated by teacher Becky Botkins and her class and will be used by the school's new garden club.

Seaside High School is growing a fresh new club for students interested in gardening and agriculture.

Becky Botkins, in her second year as the Life Skills teacher, has partnered with the Clatsop County Master Gardeners to establish a club that will utilize the garden created on campus several years ago by a senior for their Pacifica Project. The club will be titled Seaside Growing Garden, Botkins said, because “as the garden grows, the students also grow in knowledge and interest in the garden.”

The space has not been consistently managed or tended to the past few years, although the high school’s culinary arts program used one area for growing herbs and the Sou’Wester Garden Club has provided a grant for maintaining the space.

When Botkins started teaching, she recognized the garden’s potential as a place for her students to learn in a relaxing outdoor environment. She instructs a self-contained classroom for students who have developmental disabilities. They are with her two to five periods per day depending on their individual education plans. Botkins provides academic support for reading, math, and language arts but also teaches the students practical life skills, such as preparing food, doing laundry, and other means of caring for themselves after school.

“I was looking for different ways to teach the kids,” Botkins said. “I thought the garden would be a great place to teach them some of those things and the academics they have to learn.”

Taking a break to garden

The garden has a native plants section, an edible flowers section, the culinary herb garden, a succulents section, and other mounds used for planting various plants and produce.

During the 2017-18 school year, in addition to weeding and planting crops, Botkins’ students measured potatoes as they were growing, created bar graphs to plot their growth over a month, and studied the different varieties of potatoes — blue, red and golden. Later on, they used the potatoes to make potato salad.

“I see that as an opportunity for not just my kids, but any students,” Botkins said. “We could all use a break and garden.”

Botkins worked diligently over the summer to renovate the garden and prepare it for the 2018-19 school year, widening the paths to make them compliant with Americans with Disabilities Act guidelines and covering them with bark dust donated by Westwind Landscape Supply. Knife River donated river rock to replenish the dry river beds and Dennis’ 7 Dees Garden Center donated plants, as well.

Wanting to start a school-wide garden club but knowing she could not do it alone, Botkins contacted the Clatsop County Master Gardeners. They created a curriculum for the club and will volunteer their time to help lead it throughout the year.

Botkins planned to hold two meetings — one at the end of November and the other in the first week of December — to gauge the interest of the student body. She also served chips and salsa and blueberries and granola to give the students a taste of what is possible by growing their own food.

Botkins hopes to get the club underway in January.

As to what they will accomplish throughout the year, the options are plentiful, but Botkins hopes to get input from the students. Her ideas include continuing the club throughout the summer and providing produce for the school’s summer lunch program; entering items into the Clatsop County Fair; growing food to donate to the local food pantry; or running a booth at the Seaside Farmer’s Market to fundraiser also learn about handling money. There also is a patio in the garden where they could set up a grill and have barbecues.

“I want to give them those options, I don’t want to dictate what we do,” Botkins said.

The garden is also a place where other teachers can conduct hands-on learning. The construction class, led by Jeff Corliss, is making and donating a bridge for the garden, and Doug Mitchell has indicated interest in having his earth science class test the soil to detect pH and nutrient problems and provide solutions for enriching the soil.

As for district-wide collaboration, Botkins envisions partnerships that involve Broadway Middle School’s greenhouse and the garden at The Heights Elementary School.

“My big dream is we incorporate all the schools into some project that they can do together,” she said.