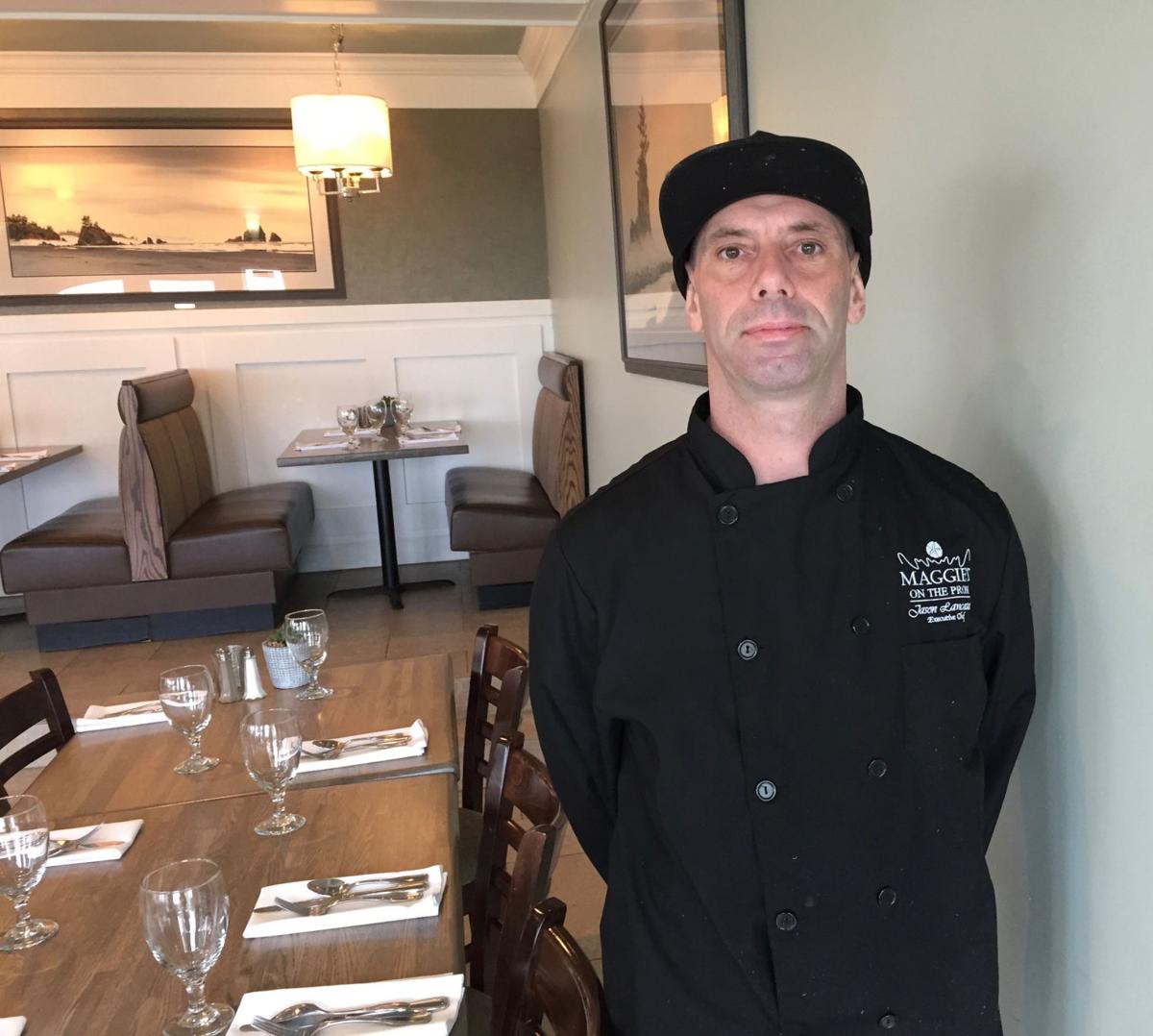 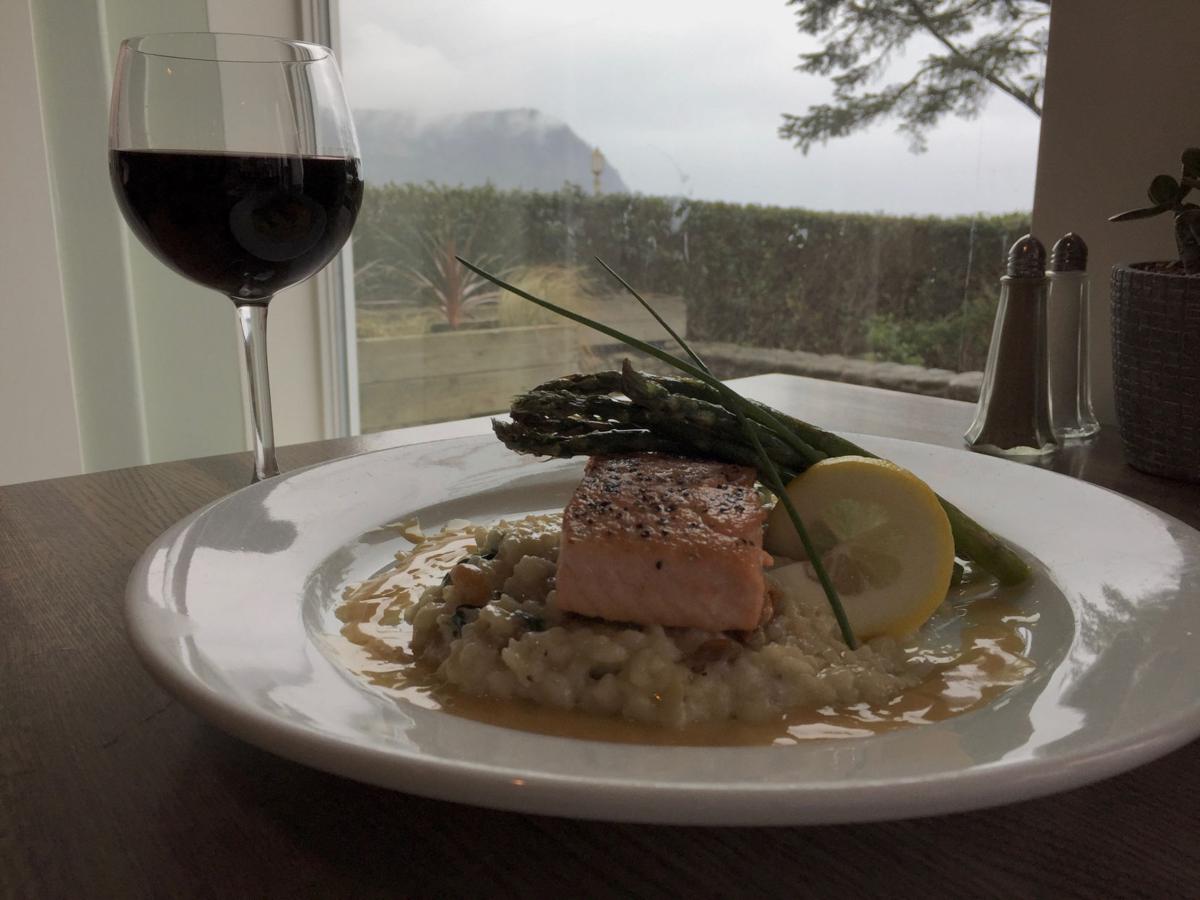 Dining with a view of Tillamook Head at Maggie's on the Prom. Salmon by chef Jason Lancaster. 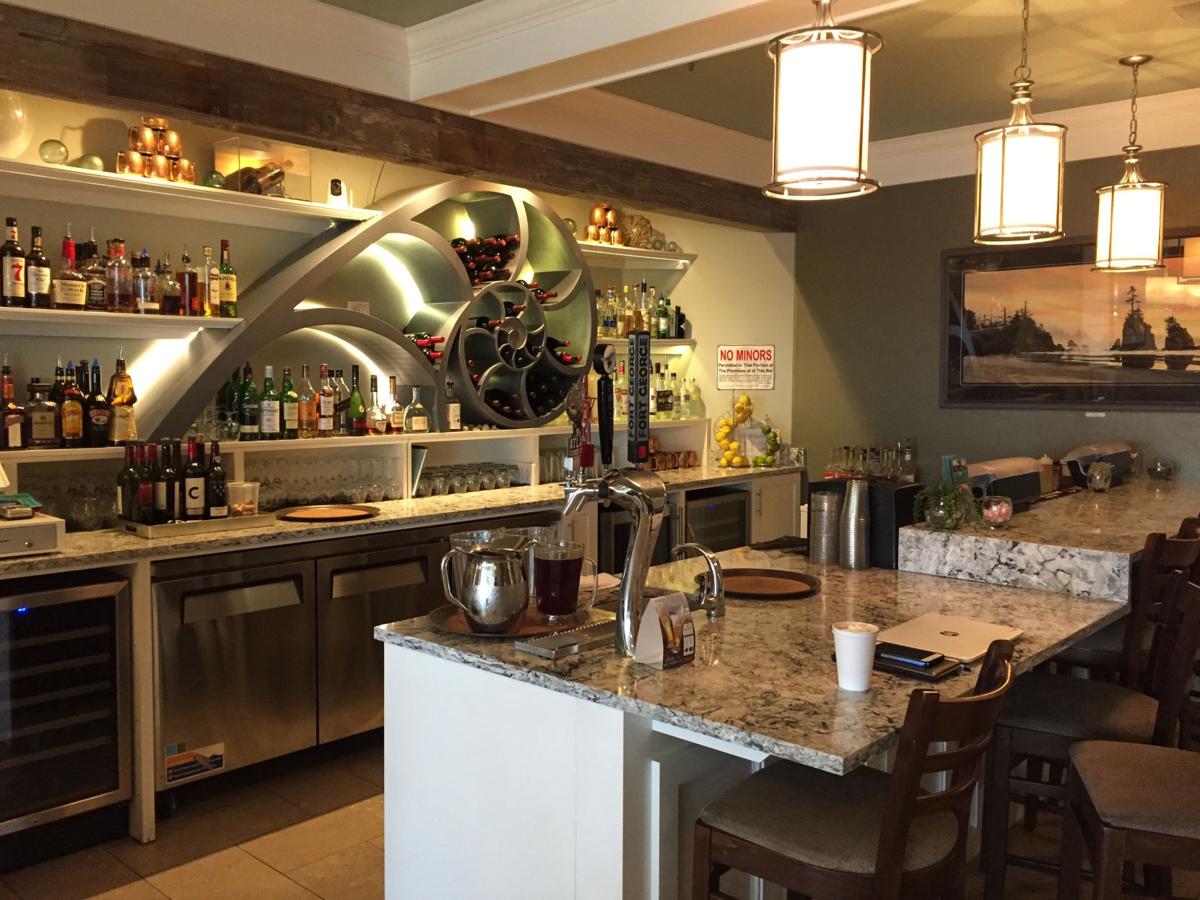 Bar area at Maggie's on the Prom in Seaside. 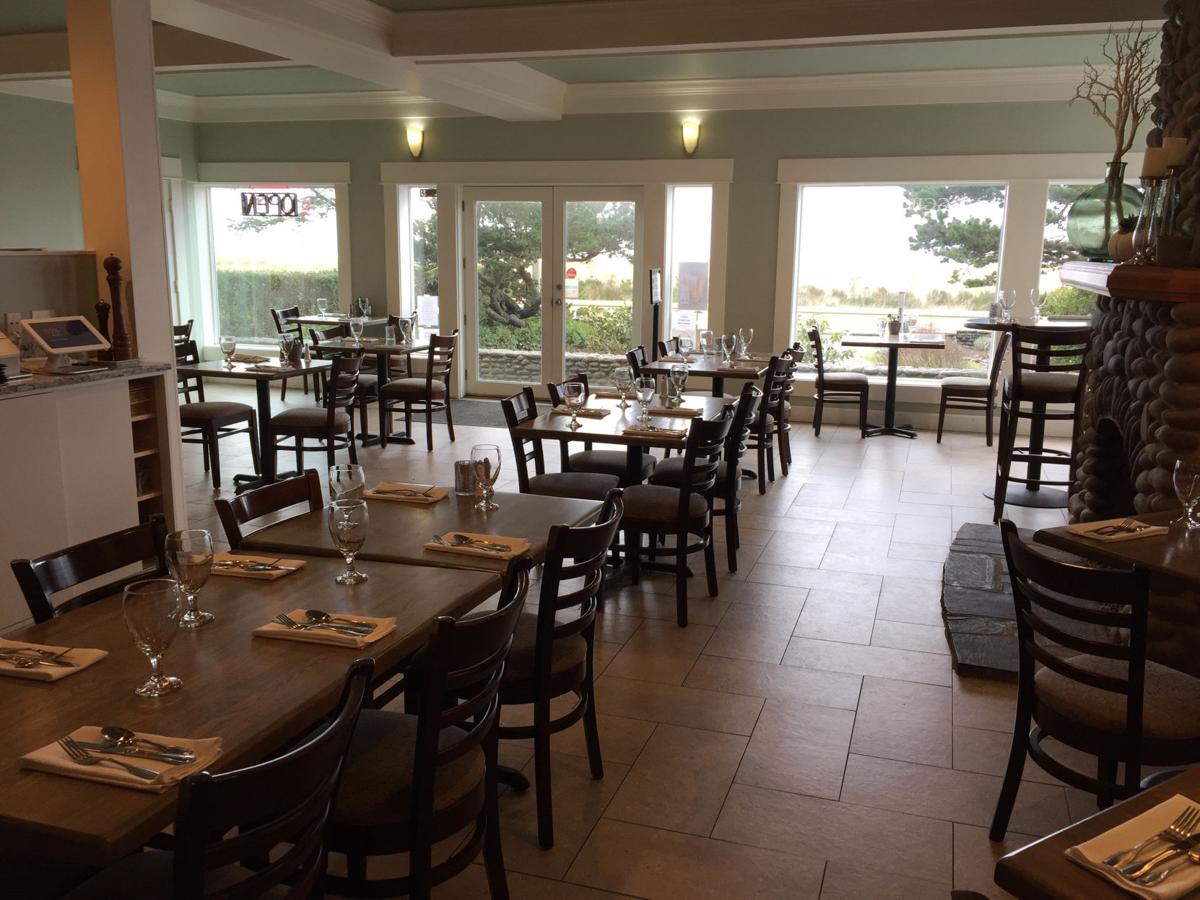 Dining at Maggie's on the Prom. 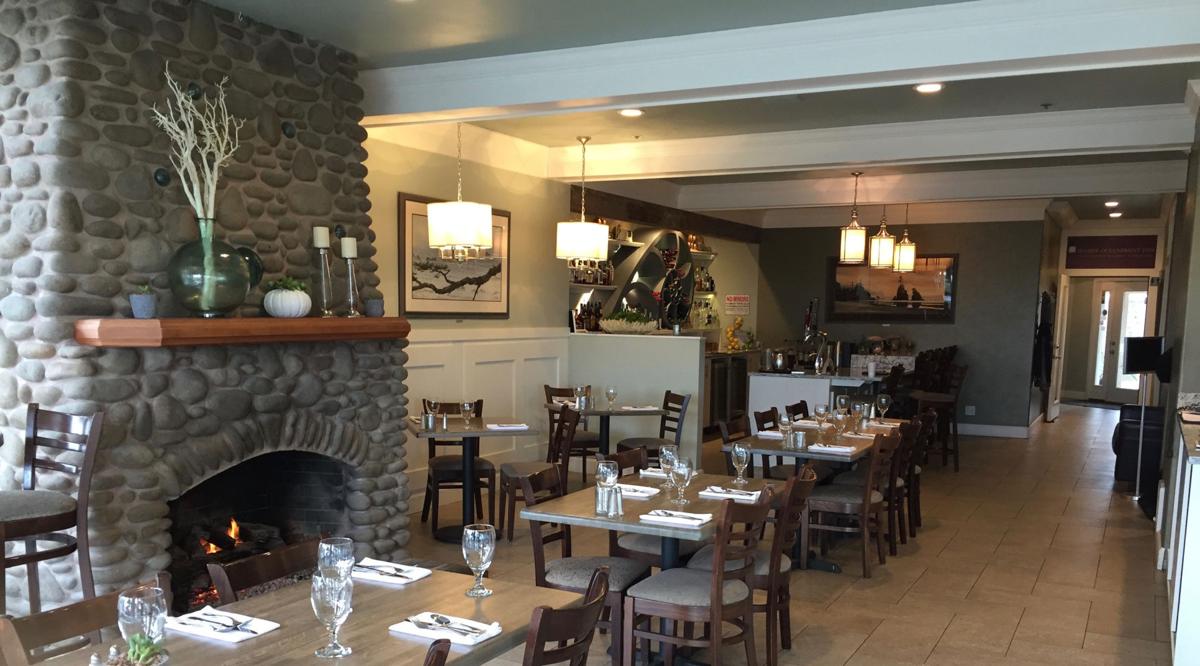 Dining at fireside is one of the appeals of Maggie's on the Prom.

Dining with a view of Tillamook Head at Maggie's on the Prom. Salmon by chef Jason Lancaster.

Bar area at Maggie's on the Prom in Seaside.

Dining at Maggie's on the Prom.

Dining at fireside is one of the appeals of Maggie's on the Prom.

Take a seat at Maggie’s on the Prom and gaze at Tillamook Head while dining on Cedar River Farms filet mignon or Columbia River Chinook salmon with yuzu sake butter sauce.

Maggie’s new chef Jason Lancaster, 40, said he always wanted to live on the Oregon Coast. Upon arrival in Astoria five years ago, the Seattle native joined the Bridgewater Bistro as a sous chef and graduated to chef de cuisine. At the Cove at the Peninsula Golf Course in Long Beach, Washington, he enhanced his reputation with accolades that included an Iron Chef Goes Coastal award and a “Gerry Frank’s Picks” selection.

When the Cove golf course property sold, Lancaster turned to his hobbies of surfing and traveling while casting a net for his next opportunity.

The timing was right as longtime acquaintances Andy and Sadie Mercer of Maggie’s on the Prom were in the search for a leader in the kitchen.

“When the job opened they asked me if I was interested in doing it,” Lancaster said. “I’ve always loved this place, so I jumped on it.”

Lancaster said he plans to use fresh, local ingredients while offering “a nice eclectic menu.”

“I like to take a lot of different ingredients and put them in a contemporary environment,” he said.

Lancaster seeks to focus on fresh, local products, provided by connections among regional foragers and fishermen.

“I have a good network,” he said. “I really want to showcase what we have here in Oregon and Washington in a contemporary environment like this restaurant. We have amazing products here — the freshest fish, mushrooms, fruit, huckleberries. You don’t even need to search for it. It comes through your back door.”

The uniqueness of the Oregon and Washington product “really sets us apart,” Lancaster said. “That’s one thing I really want to bring to the table here — emphasis on fresh, wild, the best possible products I can put on the plate.”

Lancaster said he hopes his kitchen will be in “the realm of Bridgewater, Carruthers, all the really hot dining places in Astoria. I really want to achieve that.”

Breakfasts begin with eggs, toast, sausage, crab Benedict, “pretty much your standard breakfast fare with a little bit of a twist, a creative twist,” Lancaster said. “It’s not your typical breakfast, but it’s very approachable.”

A huckleberry cheesecake is a star for dessert, along with a stout brownie and blackberry cobbler. “Our desserts are very simple,” Lancaster said. “They’re made daily and we use good ingredients. I’m hoping in the new few months to get a pastry chef. That’s in the works right now.”

“Today I’m making the Columbia River Chinook salmon with yuzu sake butter sauce with bok choy risotto,” he said. “That’s a little bit of an Asian influence there. I’m using Asian ingredients in French techniques and local fish. That’s what we try to achieve there. Ingredients outside of the box but still using proper techniques and cooking too.”

Looking ahead, Lancaster said he plans to serve a Northwest bouillabaisse using an in-house fish stock. “It’s pretty spectacular,” he said. “It will contain all local fish from Oregon and Washington, Alaskan when we can — but emphasis on fish from here.”

When he’s not in the kitchen, inspiration comes from Lancaster’s hobbies of surfing, hiking and traveling.

“I’m a pretty avid traveler,” he said. “When I’m not working, between jobs, I go surfing. It actually provides inspiration in the kitchen because you’re traveling and eating cool food and you think, ‘Wow, I can do this!’ It really adds depth to your menu when you’re experiencing different cultures and eating different food.”

As for Seaside, it’s not just the fast-food stop between Cannon Beach and the North Coast anymore.

“I would love for us to be on the forefront of the culinary scene in Seaside,” Lancaster said. “We already have a great reputation here. We have the reputation for being the best dining in Seaside. We have the view, the dining room, a great wait staff and very talented kitchen, so we’ve really busted out.”

Chefs throughout the region are a close-knit group.

“Working in Astoria, in Long Beach, there was a nice community,” Lancaster said. “In Seaside I’m sure I’ll forge those relationships also. I feel there’s a good bond between chefs from Cannon Beach all the way to Astoria. We know each other, what we’re up to.

“I want people to come check us out,” he added. “We’re going to be doing some cool stuff, with emphasis on local ingredients and really cool food that’s not really offered in Seaside. I encourage people to come check us out and see what they think. In the next six months, it’s going to be very eclectic, pulling very different flavors from around the world into our little box here.”