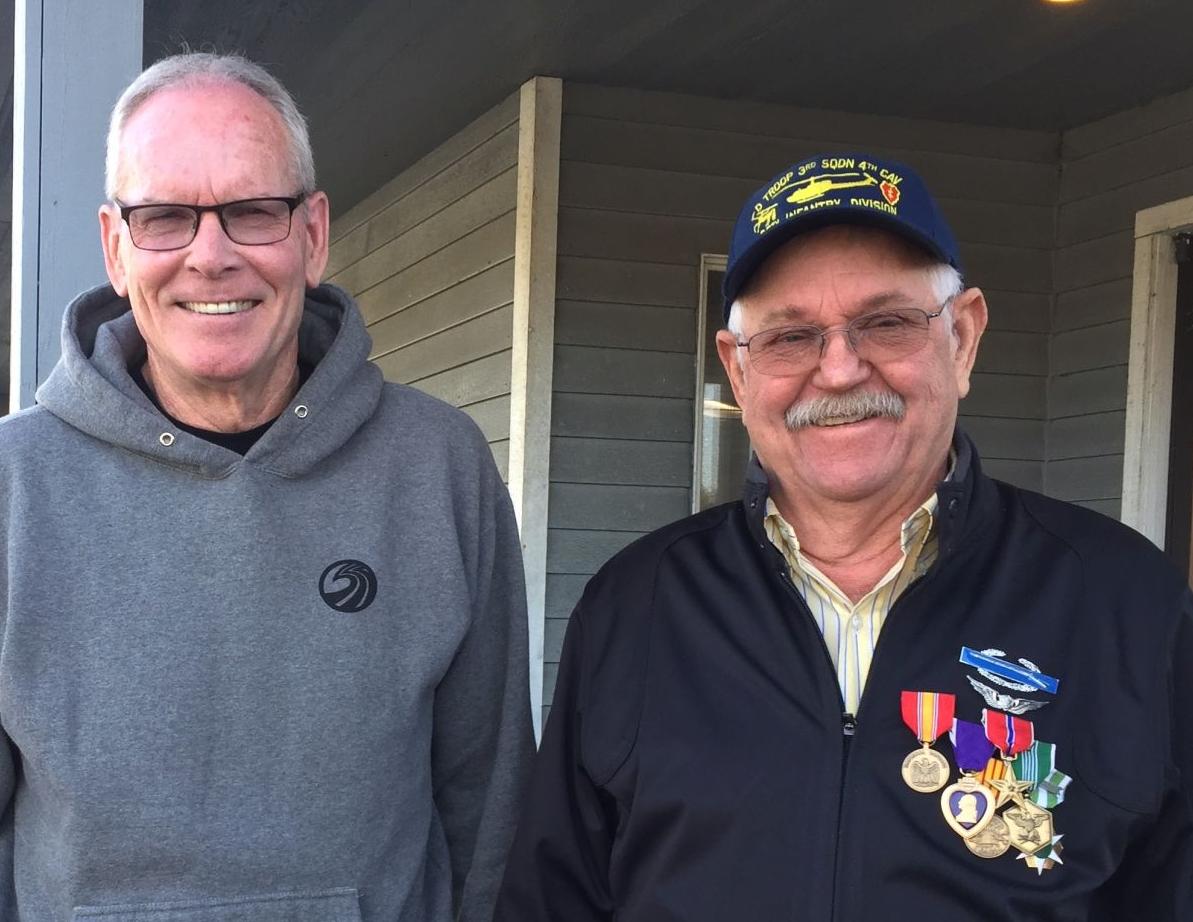 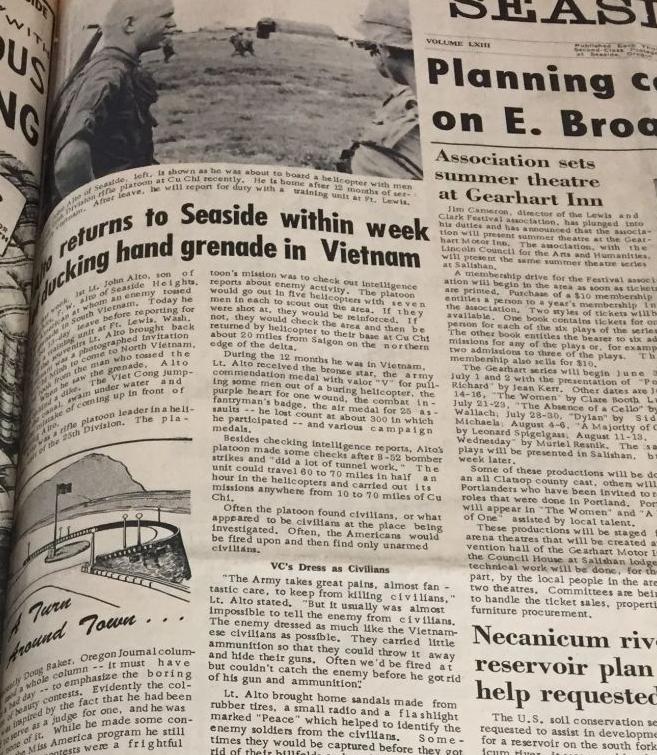 John Alto returned from Vietnam after a near miss. His story was told in the 1967 Signal. 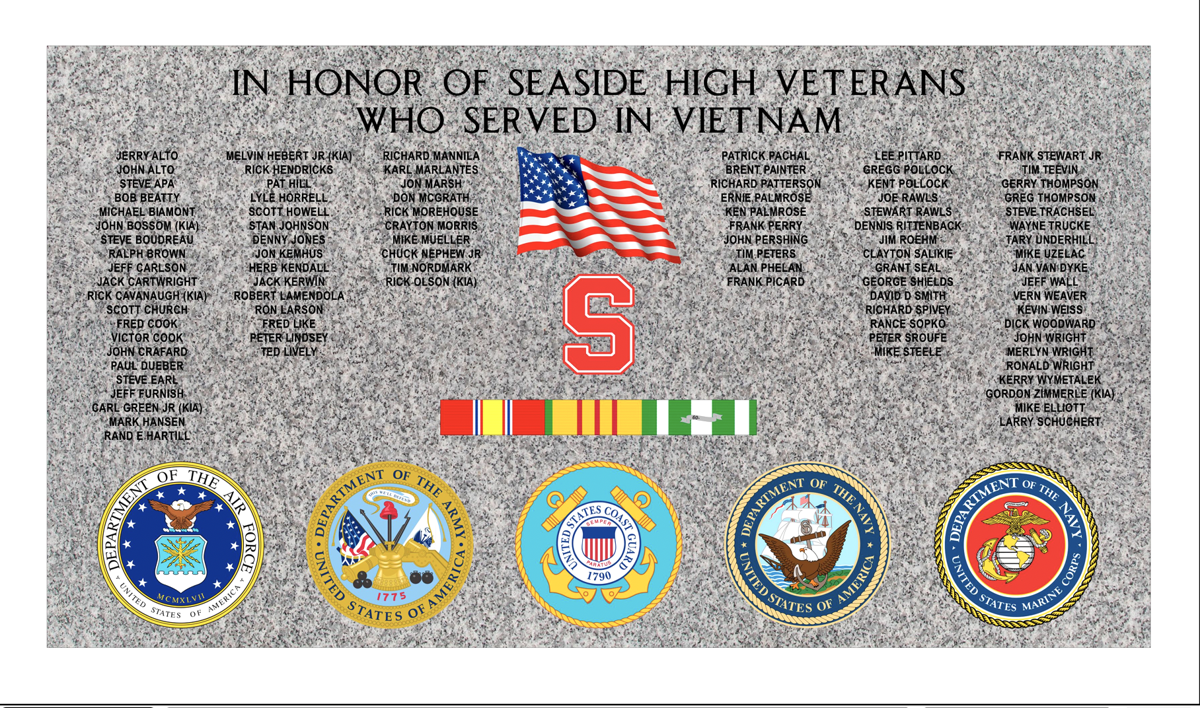 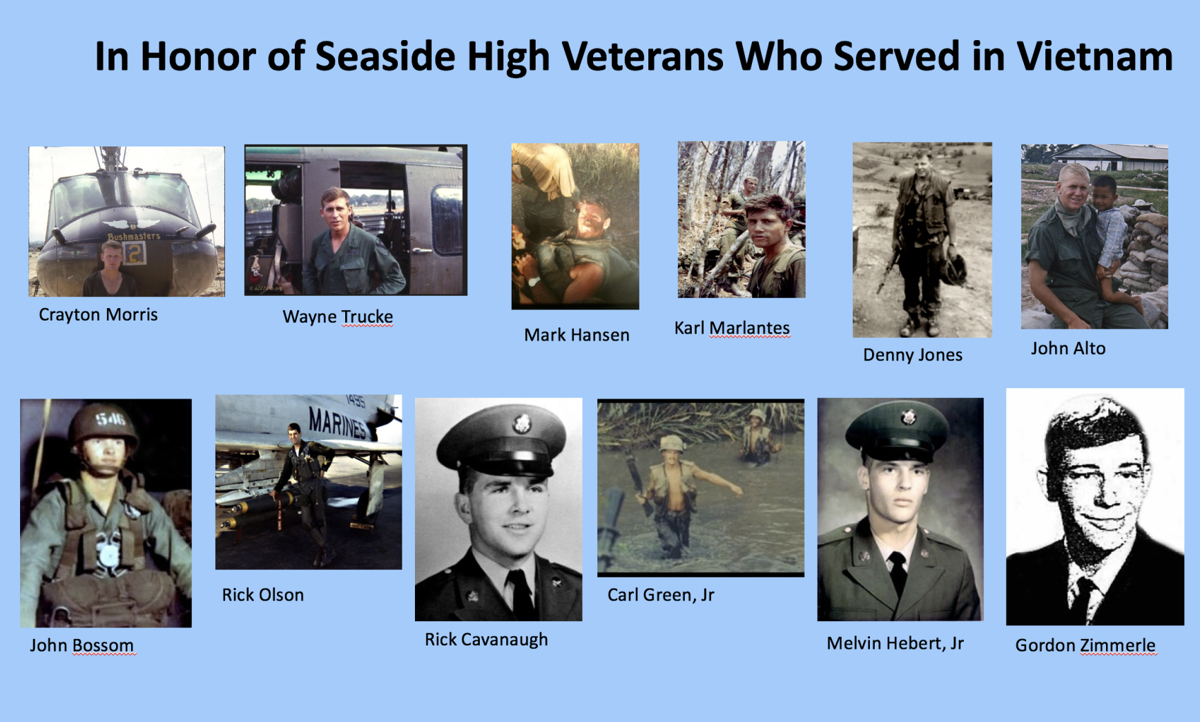 Some of the local veterans of Vietnam. 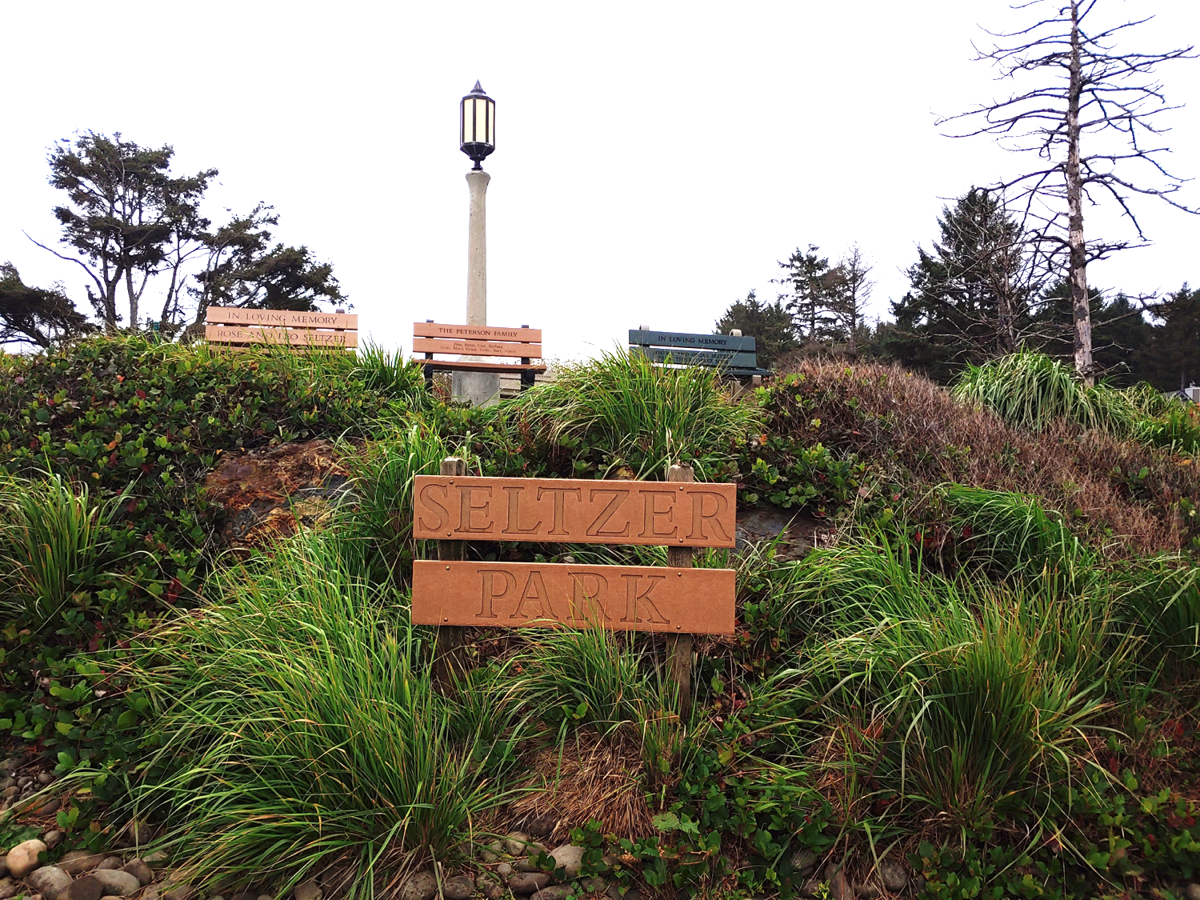 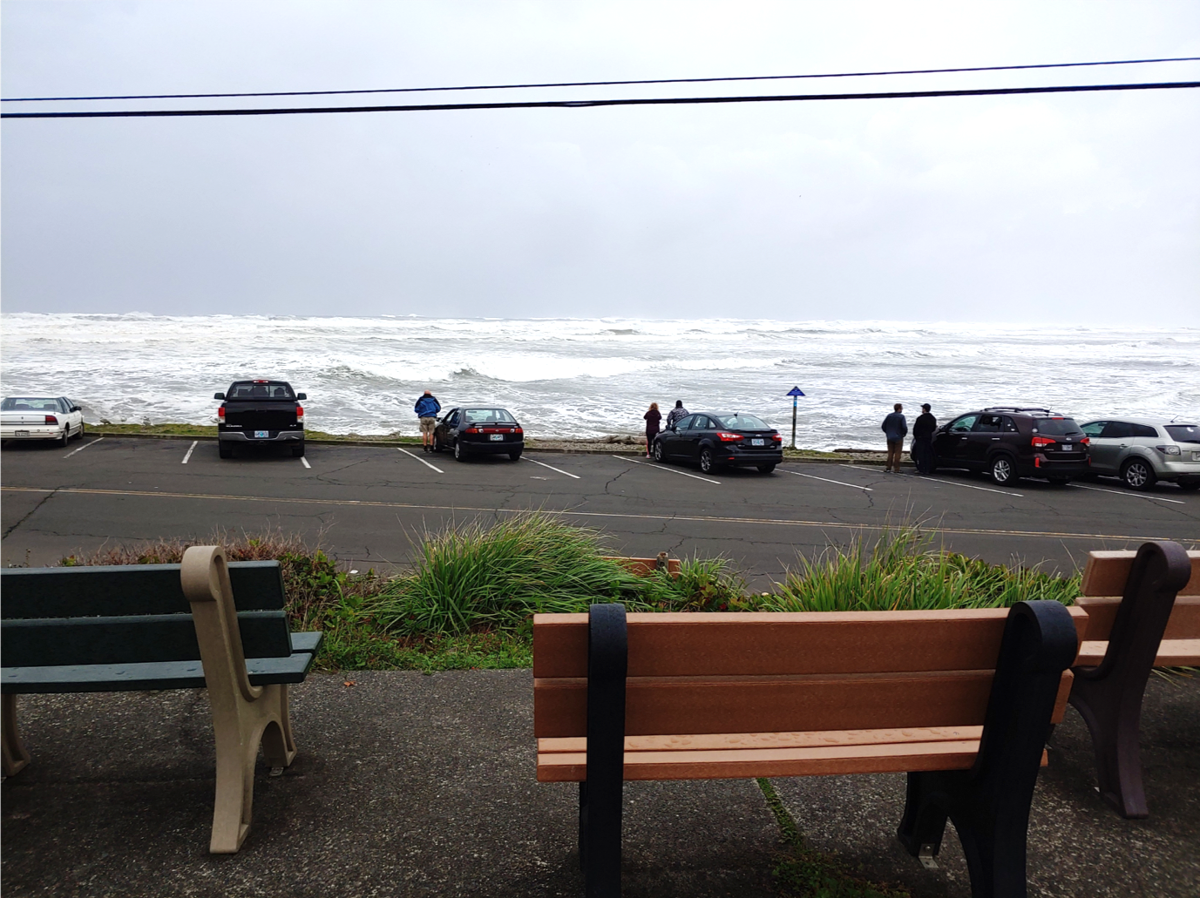 The area where plaque is to be installed overlooks the Cove. 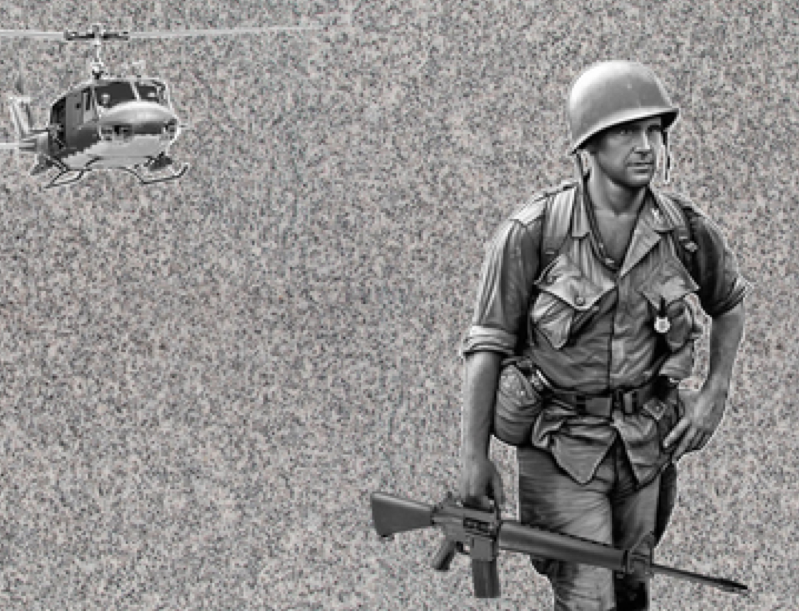 John Alto returned from Vietnam after a near miss. His story was told in the 1967 Signal.

Some of the local veterans of Vietnam.

The area where plaque is to be installed overlooks the Cove.

Seaside’s Mark Hansen, a Vietnam war veteran, presented plans for a granite memorial to be installed in Seltzer Park in Seaside’s Cove. The plaque will honor veterans who attended Seaside High School.

The plaque is estimated at a cost of about $14,000, to be raised from contributions.

Q: Tell me about yourselves and your time in Vietnam.

Hansen: I’m 74. I’m from the Seaside High School class of 1963. I stayed in college as long as I could and got my degree. I told them at the draft board I’m not opposed to going, but I’d prefer to have my college out of the way.

I finished Portland State University in 1968 with a bachelor of science degree in social science. I wanted to save the world. I got married in December 1968. I got my draft notice in April 1969, went to basic training and was in Vietnam Oct. 1.

Q: How long were you over there?

Q: Where did you serve?

Hansen: I was down south. We were about 30 miles from Vung Tau. My base camp was Nui dat, which was the compound for Australians and New Zealanders. It was huge. We’d do fire missions for them. I was with a 155 self-propelled Howitzer unit.

Q: You were close to the action?

Hansen: We were always behind the infantry to give them fire support. I was scared the whole time I was there. My unit was very lucky.

When we’d go on road marches, we’d go after bunkers, prepping LZs (landing zones) so helicopters could come insert troops and pick up the casualties.

We went up to the Cambodian border in March 1970. We could’ve been ambushed at any time. It never happened. I’m very fortunate.

Q: John, tell me about your experience.

Alto: I graduated from Seaside High School in 1961, then went to OSU. At that time all men had to take two years of mandatory ROTC. I kept going, took four years, and graduated in June of ’65.

It was right after I bought a new Corvette convertible when they told me, “You’re going to Vietnam.” My new Corvette sat in a barn for a year.

I got on the USS Walker from San Francisco, from there to Hawaii. We left in the middle of the night, 50 buses loading people onto ships. It took about a week to get to Vietnam.

When I got there, they assigned me to an army unit in the la Drang Valley. It was talked about in the movie “We Were Soldiers.” It was the first major U.S. involvement, and it got real ugly.

I didn’t have one day of infantry training other than ROTC, and I told them that. The colonel in charge said, “That’s good information. Just don’t tell your platoon.”

At the time there were only 10 people in the platoon. We never did have the chance to deploy or train together until we were in the combat zone. The rest of the platoon came in en masse and they were straight out of basic and AIT (advanced individual training).

Our platoon was called the aero rifle platoon. That was a brand new concept because air mobile was just getting started. We were probably the first army combat unit without medics. They felt because we had helicopters we didn’t need medics.

Q: What was your primary mission?

Alto: We were based at Cu Chi (northwest of Saigon). We were the first response if a pilot got shot down. If a unit was in trouble, the klaxon went off, we had to be in the helicopters in three minutes. And that happened quite often.

Every night one of my squads had to be outside the wire, concertina wire bordering the camp. They came back in looking like they’d been lost 15 days, and they had to get back in with us and do our jobs.

I don’t know how many combat assaults we did, but I know it was more than 100.

The biggest worry, we were never knowing what was waiting for us.

Our secondary mission was putting out five-man, long-range patrols. They stayed out for five days, five men. We were responsible for putting them in. In case someone was waiting for them, we had to go in and get them back out. If they were compromised, we had to react.

We were getting mortared in the base camp the whole time. The biggest worry was never knowing what was waiting for us.

(Author and Seaside High School graduate) Karl Marlantes talks about that. In World War II, there was a line. If you were behind the line, you could have a drink, relax.

We were never safe anywhere in Vietnam. There was no safe place, in the air, on the water, in the (Mekong) Delta. They were getting ambushed all the time coming up the river.

Q: At the conclusion of your tour, did you consider re-enlisting?

I had one or two days left in March 1966. The colonel said, “You’re going to go out and train the new lieutenant.”

Three of us got separated from the patrol. I got grazed by a grenade coming our way. None of us got hurt; we were well-trained by then. I looked out and saw a (Viet Cong) rifle coming our way — and I’m here and he’s not.

I went back and walked down to the colonel’s tent and he asked me, “You see those blades turning? All your stuff is in that helicopter.” I said, “Yes, sir!” He said, “Go get in it, you’re done.”

I shook his hand and didn’t see him for 25 years. I still can feel that freedom bird taking off. As soon as you could feel the wheels leave the ground, everybody jumped out of their seats.

The new lieutenant I was breaking in that day asked for an immediate transfer when we landed back in the base camp. Gone the next day.

Q: Let’s talk about how the idea of a plaque for Seaside High School Vietnam vets got started.

Hansen: Crayton Morris, a highly-decorated helicopter pilot, kind of got this thing started. He’s got skin cancer really bad. He’s had over 90 operations.

Q: Was that Agent Orange?

Hansen: I’ve got prostate cancer, that’s one of the ones attributed to Agent Orange. We’re still in Vietnam healthwise.

Alto: We left Vietnam, but Vietnam never left us. It’s affected a lot.

Hansen: It’s hard to get information. The draft board won’t give you anything, so you start calling up people and family members. Back issues of the Seaside Signal have been very helpful.

Q: I see you are discovering new Vietnam vets day by day.

Alto: The monument company said they can always add people, because we don’t want to miss anybody.

Q: What’s your timing to install the plaque?

Q: What is your message for today’s generation?

Alto: People would die for your freedom and a lot have. We had a really major participation for a small high school. The majority of people were under 25 that got killed, and they were draftees.

Alto: When they processed us out, they wouldn’t let us leave without our uniform on.

They said, “You’re not going to be treated right if you have your uniform on.” I went into the PX, they bought me Levis, a jacket, had my stuff packed up — and when I got home my family was waiting for me.