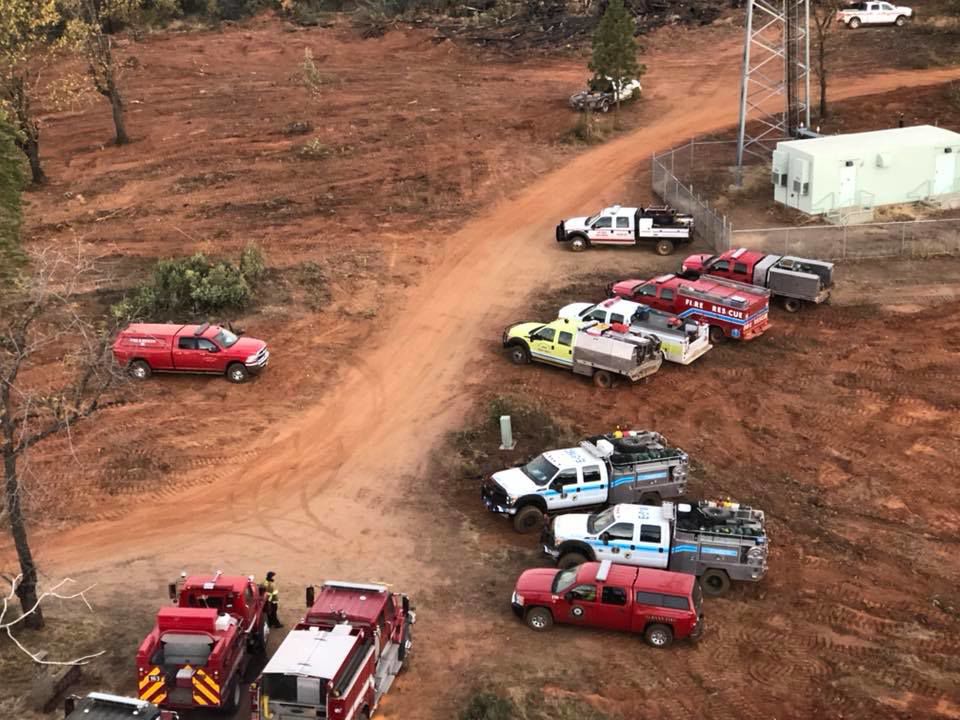 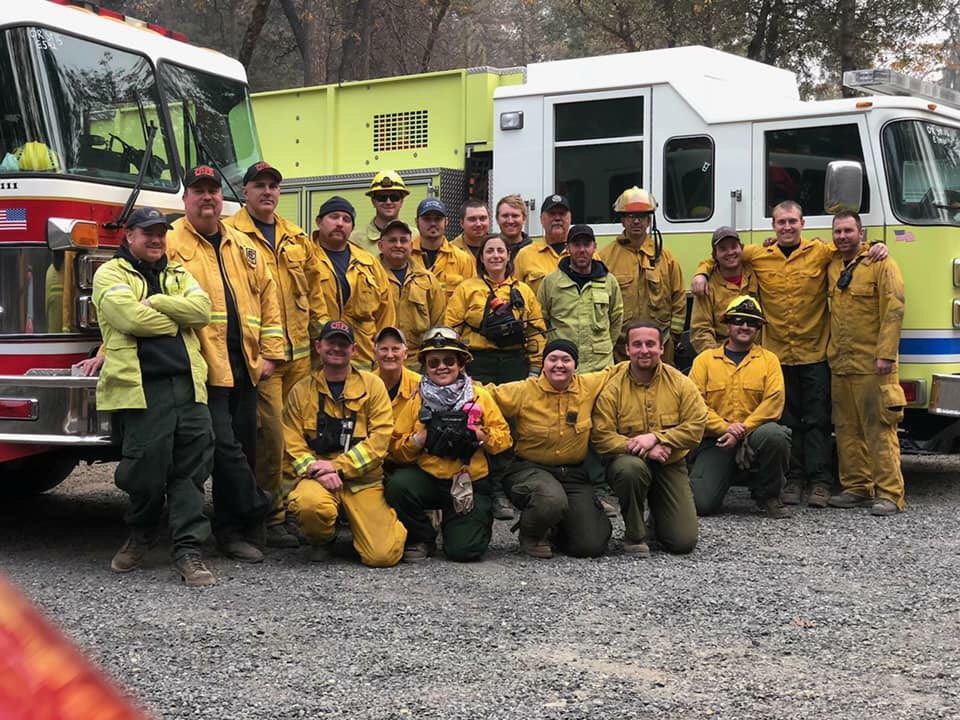 The fire started Nov. 8, in Butte County near the northern California city of Paradise. Before its containment on Nov. 25, the fire had burned more than 153,000 acres, destroying almost 14,000 residences, 528 commercial buildings and thousands more damaged.

The Clatsop County strike team, with members from Gearhart, Seaside, Olney Walluski, Knappa and Lewis and Clark, joined teams from throughout the state. Randolph “Tad” Pedersen, Deputy State Fire Marshal for the Office of the State Fire Marshal the county’s team, led by Chief Jeff Golightly of Lewis and Clark, was one of 15 that received an emergency management assistance compact request. Between the two strike teams, 19 county people joined the team. Two Clatsop County engines joined the Columbia County Strike Team.

Rankin’s first impression was of “the wide-scale of destruction,” he said. “The amount of buildings, trees, vehicles — everything just gone. You thought: ‘Wow, this could have been anybody you know trying to get out of this inferno.’”

‘All you saw was black’

Teams were stationed at the fairgrounds in the nearby city of Chico.

Rankin’s assignment was outside of Paradise, along the road to Concow, a small community of 700 in the Sierra Foothills.

Patrols looked for areas that “might be reigniting” and checked up on homes that hadn’t burned or had gotten damage.

“Later in the week we transitioned to structure assessment, going into areas that had been burned and looked for what was necessary to clean up or put out hot spots,” Rankin said. “We supported big burn-out operations to help strengthen up the fire line.”

Air quality was terrible, Rankin said, smoky throughout the whole valley. “The only way to get around it was to go onto the mountaintops,” he said.

Firefighters Aaron Smith, 26, and Troy Foster, 21, both of the Olney Walluski Fire and Rescue District, were among the department’s younger members to head out.

He built hand lines, laid hose and extinguished hot spots within 100 feet of the road or any area that was unburnt. “We’d flag it and our strike team would go up the chain of command.”

“The second to last day there, we were patrolling a community on Concow Road,” Smith said, describing a road leading to a community of 700 in the Sierra Nevada Foothills. “We reached the end of the road as far we could go, and it was basically bare land. All you saw was black. There were no trees standing, no grass. Most of the houses we came on were completely gone.”

With two years experience in Warrenton and about eight months with the Olney Walluski department, this was Foster’s “first conflag.”

“I like firefighting and I just wanted to help people,” he said.

Foster worked with crews in the town of Paradise, a community of 27,000, where the fire destroyed thousands of homes and killed dozens of people. “Our job was to protect structures, but by the time we got there, there weren’t many structures left in Paradise.”

Firefighters were “24 on, 24 off,” constructing direct lines and holding control lines to mitigate the threat of fire escaping.

James Hutchinson, an intern and student, along with Jordan Chandler, who works with the Oregon Department of Forestry, were joined by Tanner Rich, Sean Kirby, Angels Vargas, Kayla Miller and Lindsey Wolfe.

When the state fire marshal came through, it “started the motion of things,” Hutchinson said.

Volunteers responded within the hour, meeting at the staging area in Seaside.

Like firefighters from neighboring communities, they were divided into the Columbia County and Clatsop County strike teams.

Chandler described the fire scene in Paradise as “massive devastation — that’s all it was. That town will never be the same.”

Houses were “combusting on their own,” he was told by Cal Fire responders.

In an observation post, they could watch as flames threatened the city of Oroville, a nearby city of 16,000.

Hutchinson and Wolfe worked alongside bulldozers before heading into neighborhoods in Paradise, where 90 percent of the structures were burned down.

Chandler said his objective was to make sure that any residents left were evacuated, and to “do anything we could to save structures.”

With live wires in the roadways, it was “like Russian roulette,” Rich said. “It was a ghost town when we rolled in.”

“I think that was the worst fire I’ve ever been on,” he added. “This fire wiped out an entire town. It was like the opening scene from ‘Terminator,’ where they pan through and there was nothing left.”

“Lines of cars burnt in the middle of the road,” Vargas said. “Roofs were collapsed on houses. Everything was burnt.”

“I don’t think any training prepares you for this,” Vargas said. “It’s not what you’re trained to see.”

Firefighters stayed at the Butte County Fairgrounds in Chico, alongside newly displaced residents who had set up “mini-refugee camps,” Rankin said.

Rankin described tents and cars and tarps, “like Third World countries popping up in the middle of town.”

Firefighters slept in tents or yurts at the fairgrounds, or when on the fire sites — about 35 or 40 miles away — taking breaks in the engine, back seat or the stairwell of the engine to get “power naps to keep you going,” Rich said.

Foster said he and his team received a visit from California’s governor-elect Gavin Newsom.

“The people in Chico were amazing,” Foster said. “There were signs everywhere. They were amazingly thankful.”

“Keep your head on a swivel,” Smith said. “Anything can happen, and what can happen, will happen.”

Rich said he is a firm believer in Murphy’s Law. “Anything can go wrong — even walking around structures, you can slip and fall. I never get the sense this is safe.”

“One of the things I got taught was never going thinking everything is OK,” Vargas said. “Weather can change within seconds, and you don’t know when that’s going to happen. You have to be on your guard constantly.”

The Camp Fire reminded Rankin to always anticipate what can happen when incidents get compounded.

“The lessons don’t just necessarily pertain to wildfires,” Rankin said. “If you had a gas line explosion at a house, what if that was a gas line explosion at a hotel? If you have a little wildfire, what if you have a fast moving wildfire moving through town? Those are the kind of lessons I took. Don’t get complacent with your regular emergencies, but contemplate what happens if they get bigger, past what you’re normally used to.”

Meanwhile, the 10 days away and long shifts gave way to a Thanksgiving weekend with families, and on Nov. 25, news that the Camp Fire had been fully contained.

“A lot of us have seen fatalities and we’ve seen the devastation before,” Chandler said. “But none of us have seen what we saw down in Paradise. It’s on a much larger scale than anything we’ve dealt with here.”

Rich said his family was getting accustomed to seeing him leave town every fire season.

“My family’s used to it,” Rich, who volunteered at California’s Santa Rosa and Thomas fires last year, said. “Going to wildfires has become the new norm. My brother’s like: ‘Man, you’re gone again.’”

R.J. Marx is editor of the Seaside Signal and Cannon Beach Gazette, and covers South County for The Daily Astorian. Reach him at 971-320-4557 or rmarx@seasidesignal.com.