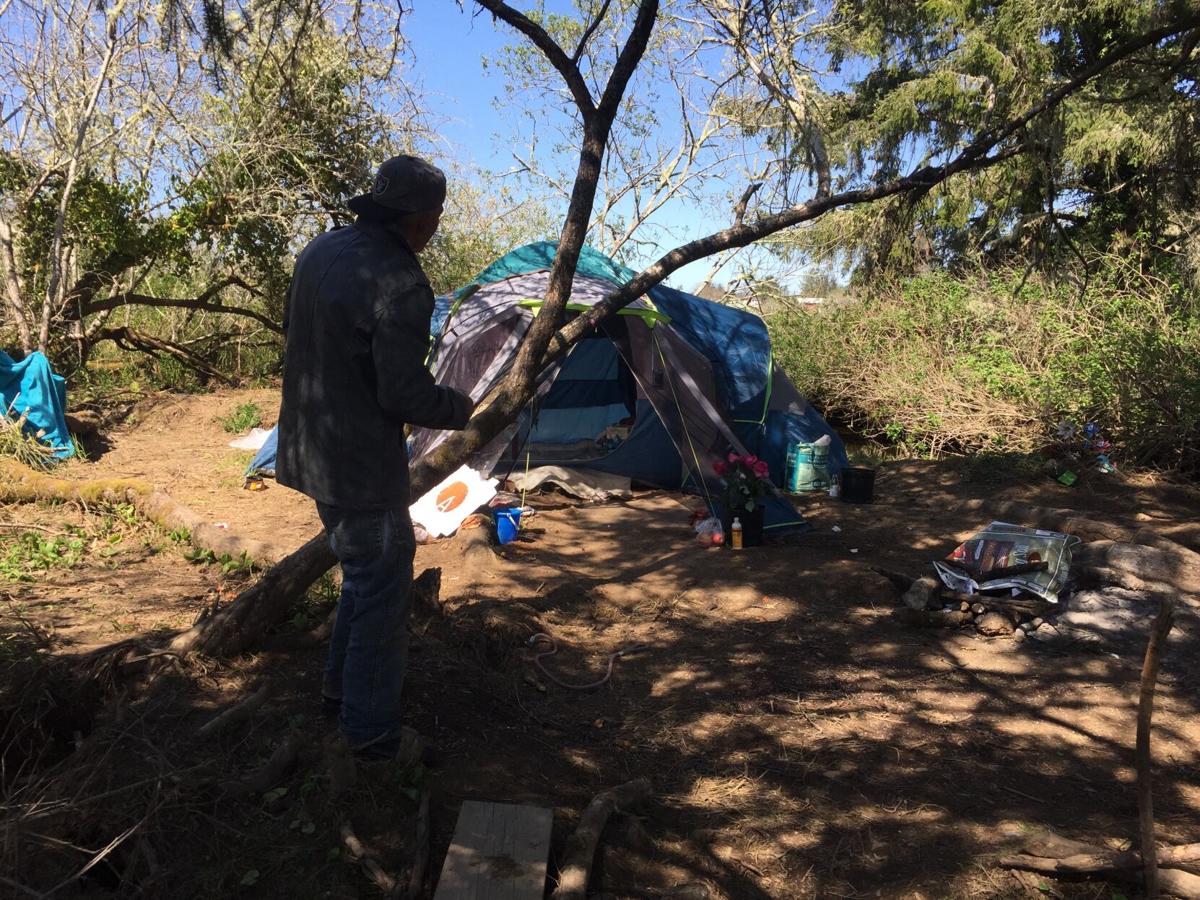 Jeremy Garcia in front of the tent he shares with his wife and their dog at the Mill Ponds. 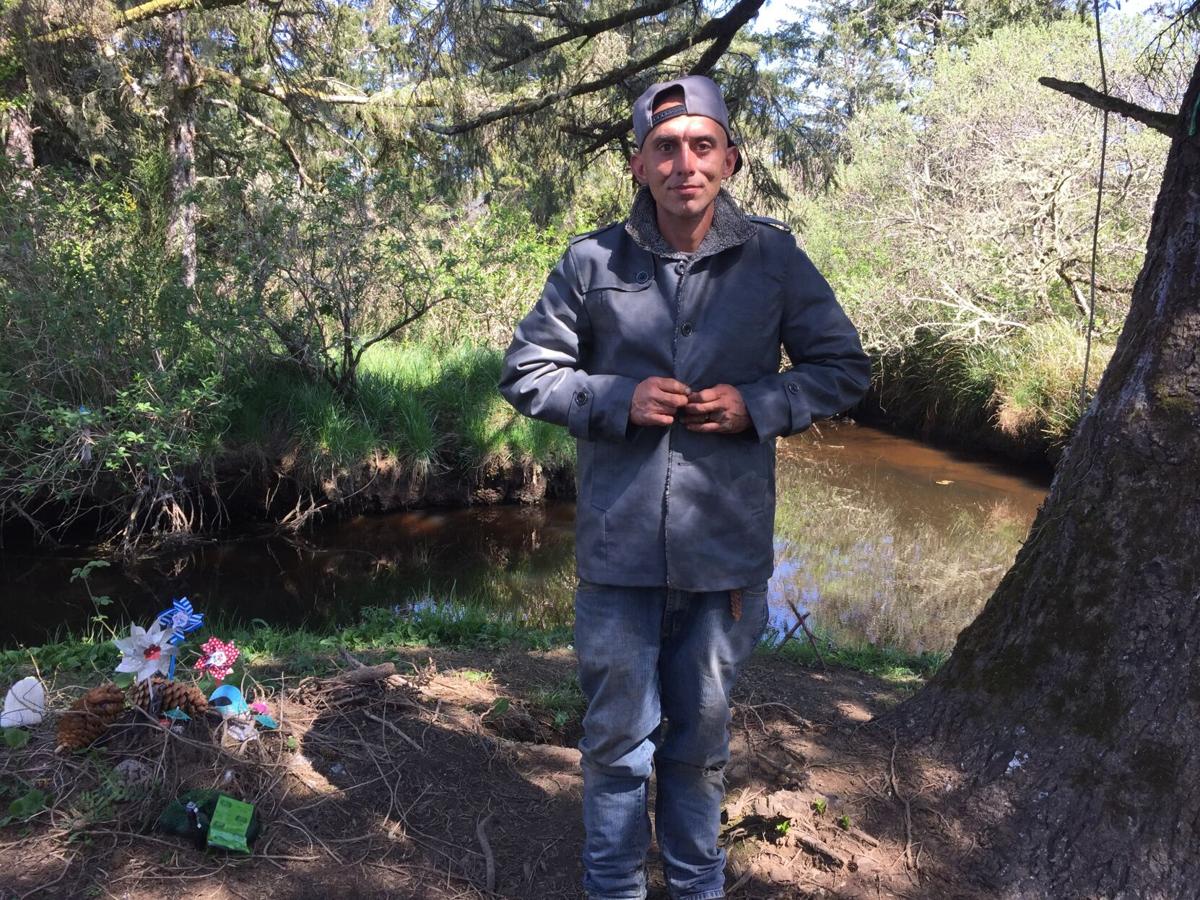 Jeremy Garcia at his camp site at Mill Ponds. 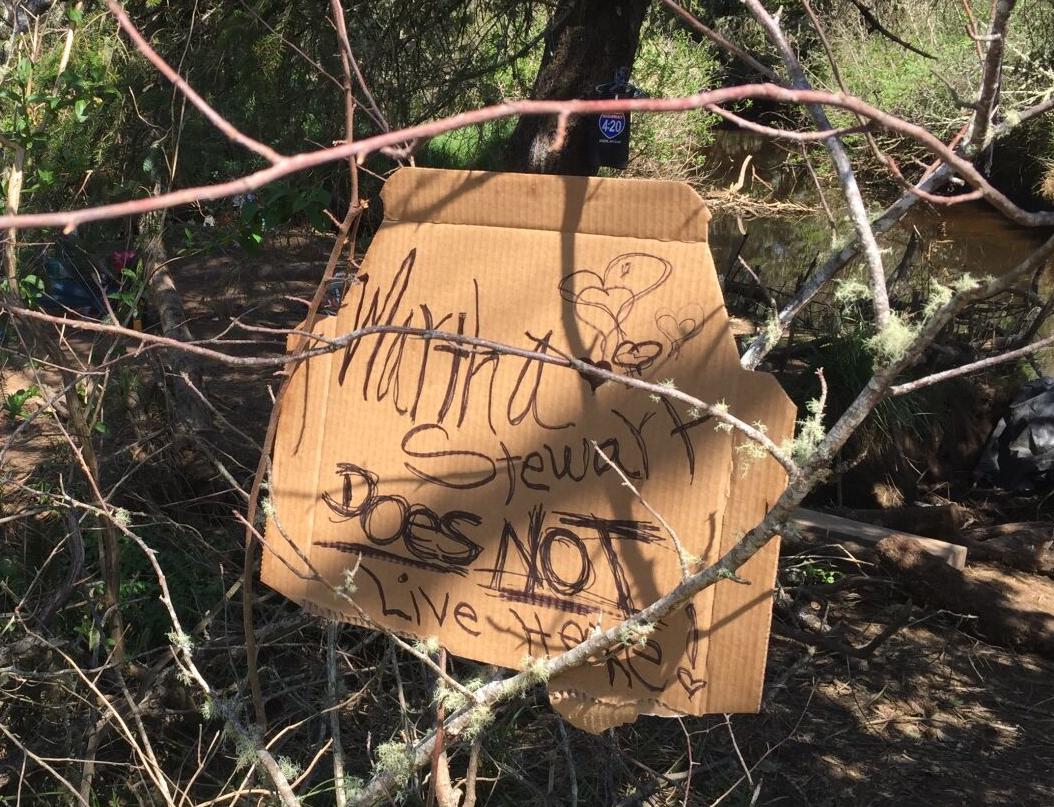 Jeremy Garcia in front of the tent he shares with his wife and their dog at the Mill Ponds.

Jeremy Garcia at his camp site at Mill Ponds.

“Martha Stewart doesn’t live here,” reads a makeshift sign posted to a tree in a Mill Ponds encampment. A tangled picket fence made out of sticks creates an outer border and sense of space. Nearby, a tent, pizza box and a scattered collection of personal belongings. A vase filled with fresh flowers lends a splash of color under the pine branches. The Signal spoke to Jeremy Garcia, who set up the camp.

Q: How long have you been here?

Q: Are you working? Are you looking for work?

A: I’m absolutely looking for work.

A: I worked at all three Presbyterian hospitals in Albuquerque (New Mexico), and I did the fire alarm system and electrical systems. I also worked at America Online before they went under. I was a coach. I had six teams of 30 people.

Q: Did you say your wife’s here with you?

A: She’s out right now. But she’s normally here.

Q: That’s a beautiful bouquet by the tent.

A: Those are her flowers. It’s not like, “Oh, I screwed up and got her flowers.” I didn’t screw up, they’re just a present.

Q: How do you handle food? Do you have some savings or any money? Do you get some welfare checks or food stamps?

A: Not even, not even. My wife really doesn’t believe in taking money from the government. What we do is, we can a lot. I do get food stamps. But we struggle a lot of the time. She has a son in Washington that she helps out with whatever money she can send him.

Q: If I can ask you, how did you lose your digs in Albuquerque?

A: I started having grand mal seizures. And I fell down at work, split my hand open, split my head open. They said “you are now a liability,” and they fired me.

Q: Are you entitled to medical benefits or insurance?

Q: The Seaside City Council is addressing homelessness now on a citywide level. Do you have thoughts on that?

A: I’m also an advocate for the homeless. I can go two ways with it. If they’re on drugs, they need to be harassed. But if they’re not on drugs, then there’s no reason that the police should continue to harass them knowing that they are not a threat. So I’m kind of trying to fight that battle right now.

A lot of the drug addicts around here kind of got mad at us because we told them we don’t want needles out here. I’ve been picking up all the needles and caps, and all the drug paraphernalia, getting sharps containers, disposing of it correctly. I just do it on my own. I lived a lifestyle in the past of the same sort, but I had enough respect to keep all that stuff out of the eye of the public, out of the eye of the children. We don’t want drugs out here. Those guys wrecked the place. If it wasn’t for all the trash they left behind, we would be welcome here.

Q: Would you live in a house if available?

Q: Would you live in a trailer?

Q: So you don’t want to be here? You’re not camping for fun.

A: No. I can work for room and board. My wife and I, we’re both fully capable.