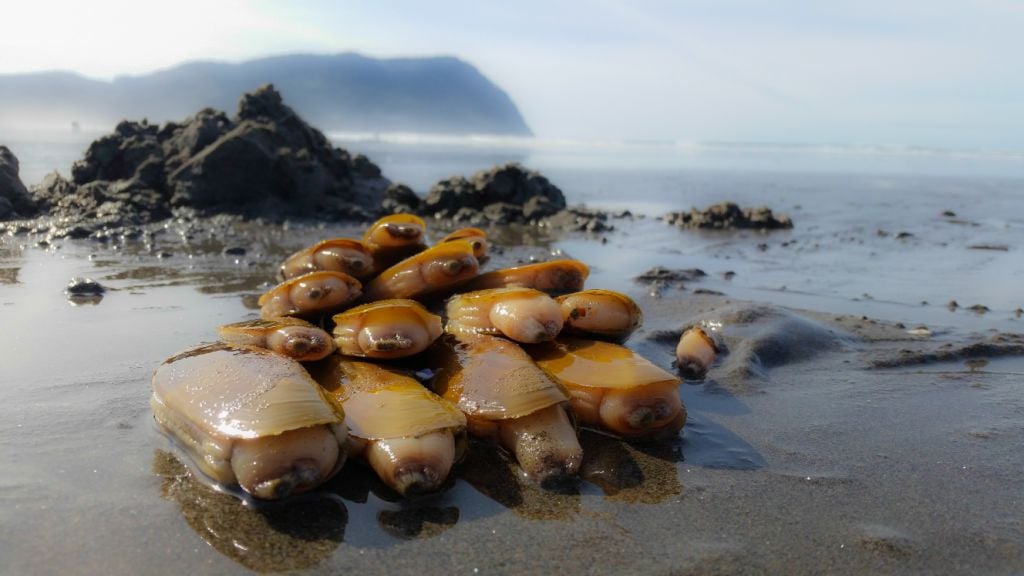 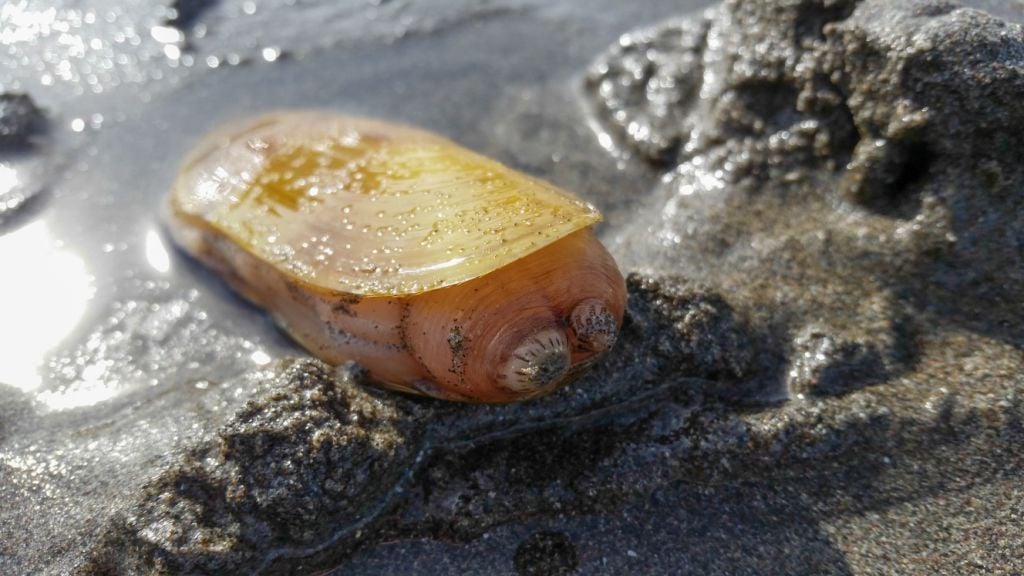 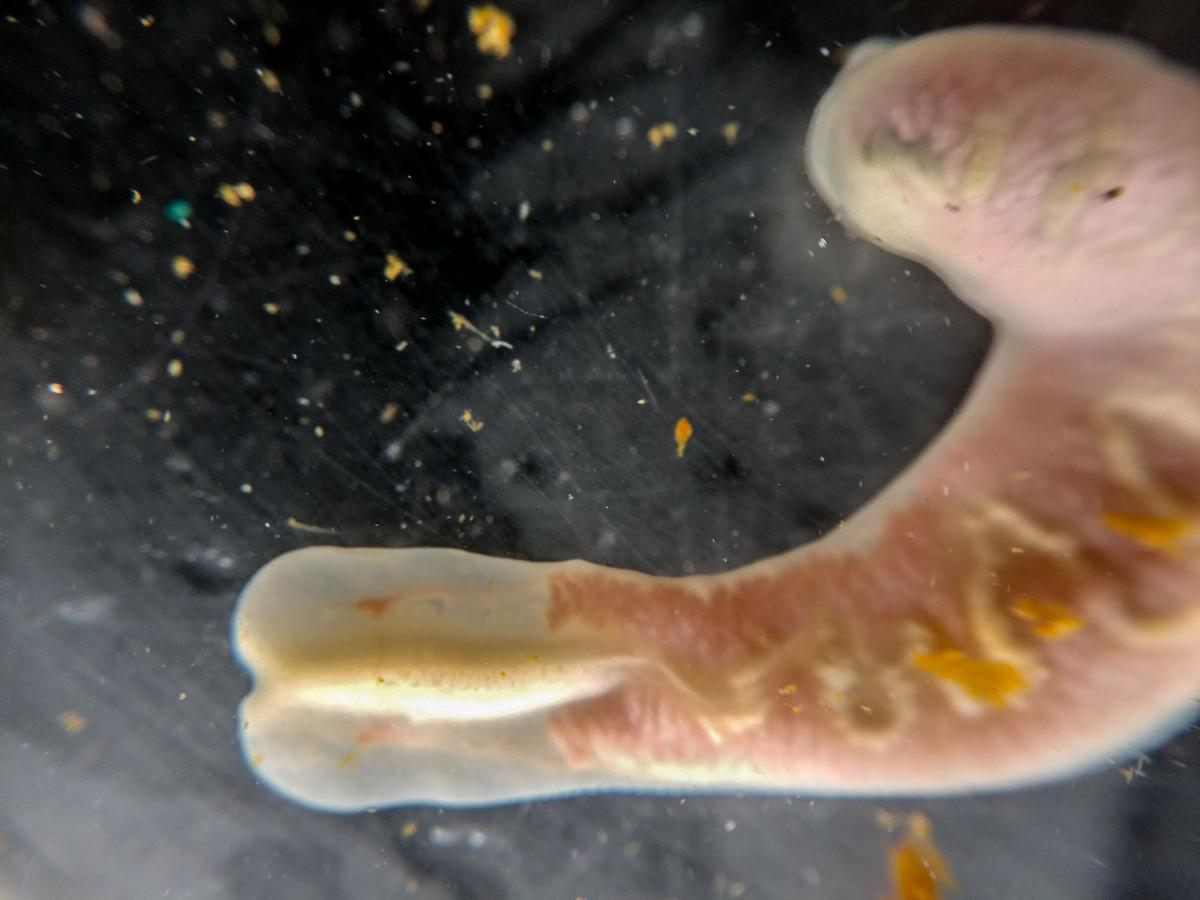 Some razor clams may have a commensal nemertean worm, Malacobdella grossa. 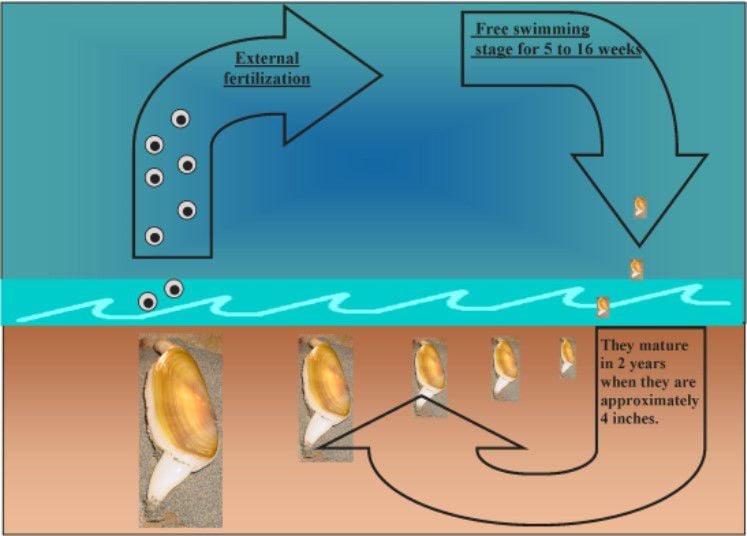 Along the 18 miles of Clatsop County coastline, the 2019 razor clam season has been extremely productive. Licensed recreational harvesters have been able to quickly fill the allotted limit of 15 clams per day during low tides.

This years’ prolific seasonal harvest is taking place after an extended conservation closure. After last years’ stock assessments found that the 2018 clam population was undersized, Oregon Department of Fish and Wildlife held a public meeting in October 2018 to invite input on potential management actions.

Life cycle of a razor clam

“We had great feedback from those who attended the meeting and those who could not,” stated Matt Hunter, ODFW shellfish project leader. The consensus was to give the small clams a chance to grow and delay until the spring to provide a quality razor clamming experience.”

The annual conservation closure was enacted in 1967 to relieve harvest pressure on the local razor clam populations and takes place from July 15 through Sept. 30 every year.

Some razor clams may have a commensal nemertean worm, Malacobdella grossa.

The closure prohibits any harvest of razor clams along all Clatsop beaches. These closures are to protect undersized young clams and to improve commercial and recreational harvests. “What we saw last year was an anomaly, we had a late spawn, but limited food supply so clams grew more slowly. By delaying the razor clam season through April it allowed the clams to grow sufficiently to meet what both commercial and recreational harvesters find desirable,” said Hunter of ODFW.

“A razor clam is at the surface for one of two reasons, to feed or to spawn,” explained Hunter. “The timing of the closure is an attempt to encapsulate the timing of spawning recovery.”

Razor clam spawning can take place May through July along the Oregon Coast and it can take several weeks for the clams to recover from a spawning event. During late summer, smaller clams are at the surface to eat while larger clams that spawned are deeper in the sand.

Larger sized clams also are an indicator of reproductive ability. Razor clams are able to reproduce at two years of age which correlates to clams measuring approximately four inches in length. Razor Clam reproduction is achieved through broadcast spawning where sperm and eggs are released into the water. Female clams are able to release 6- 10 million eggs at once, of which only 5% are expected to become juvenile clams. Larvae (called veligers) that develop from fertilized eggs free-float with the ocean current, slowly develop a shell and eventually settle onto the ocean floor as juvenile clams.

The juveniles live closer to the surface and bury themselves deeper into the sand as they grow. Within one year most clams are considered a harvestable size at 3.5 inches and will reach 4.5 inches within two years. Clams are either male or female and will reach maturity at two years. In California, Oregon, and Washington the current life span of razor clams ranges from 5-7 years, but historically they were reported to live up to 11 years. In Alaska, razor clams have been reported to live up to 18 years.

Clatsop County beaches account for 95% of Oregon’s razor clam harvest due to the high density of the local razor clam population. To dig clams, shellfish licenses are required and can be purchased at local sporting goods stores or online at https://dfw.state.or.us. Razor clam shells are thin and easily damaged, thus State law requires that harvesters keep the first 15 clams dug regardless of size or condition. ODFW will conduct the annual razor clam population assessments mid-July through early September during the annual conservation closure.

The closure prohibits any harvest of razor clams along all Clatsop beaches.