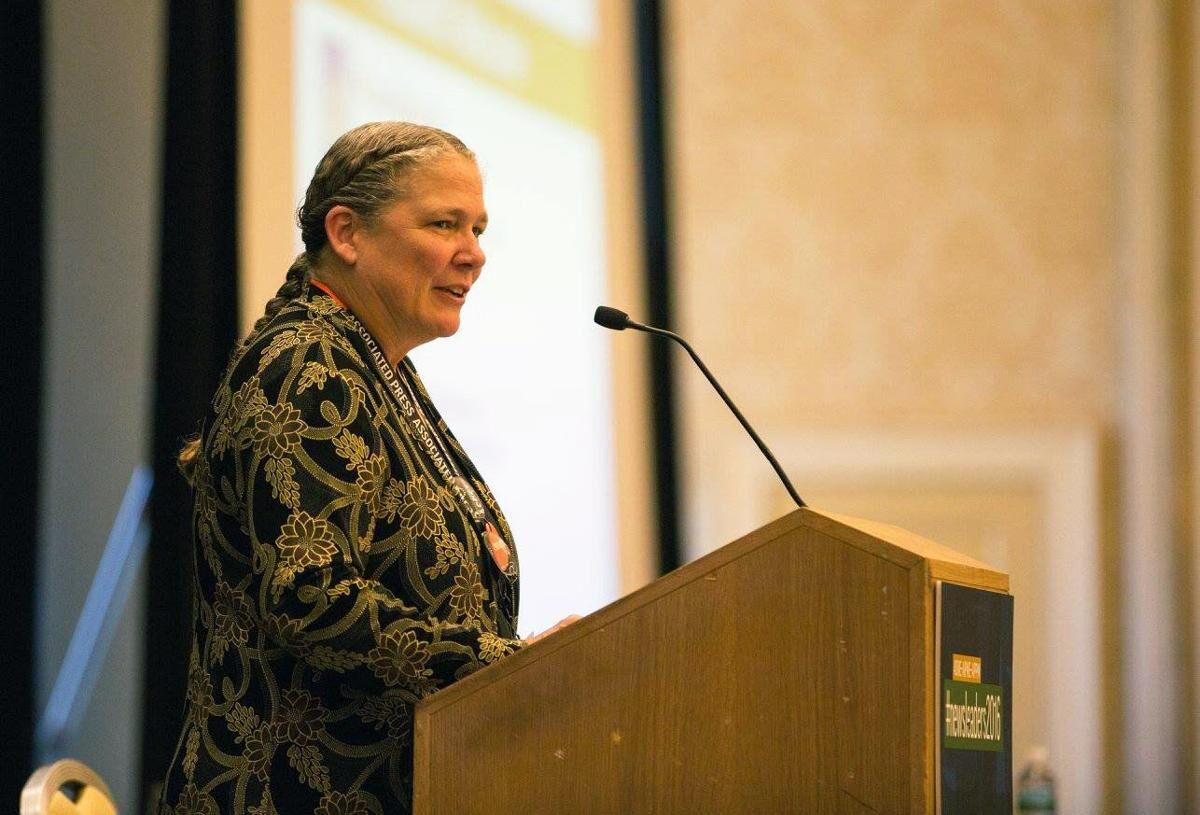 Laura Sellers Earl, as president of the Associated Press Media Editors, welcomes attendees to the #newsleaders2016 conference in Philadelphia. 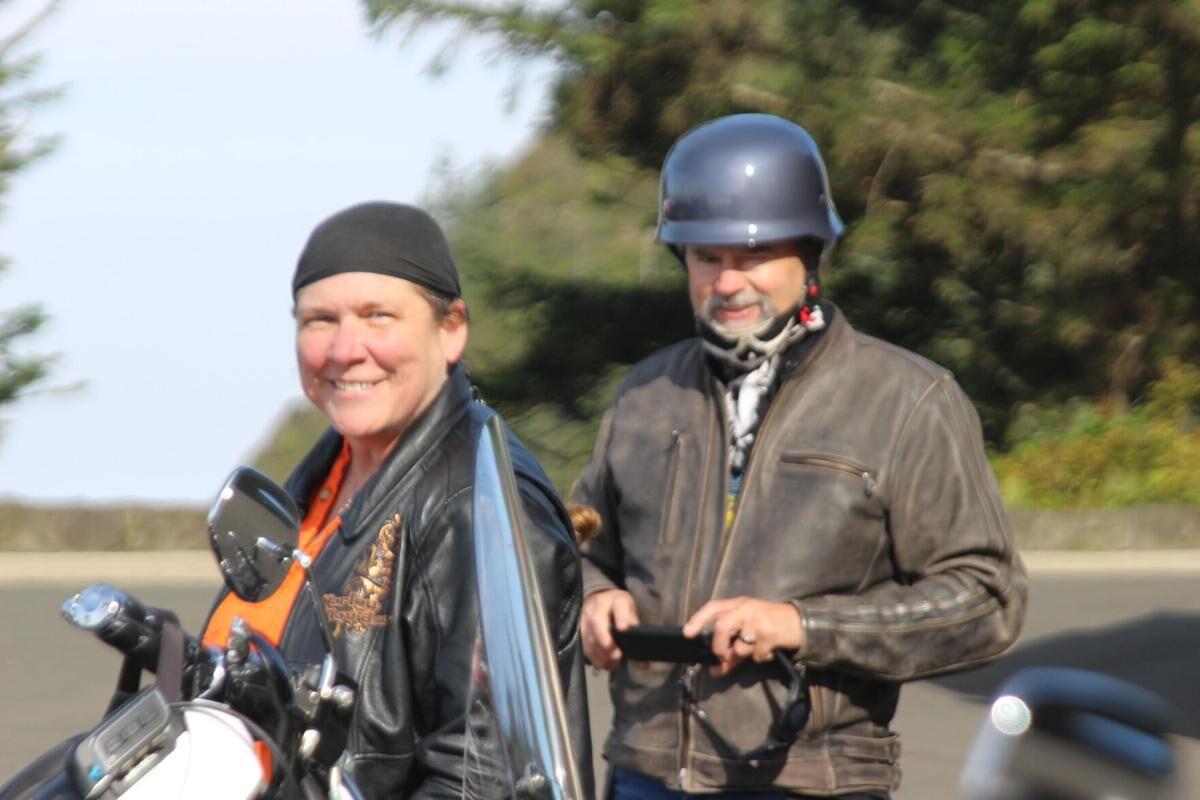 Laura Sellers Earl was active in the North Coast chapter of ABATE, a group that promotes motorcycle awareness, education and safety.

Laura Sellers Earl, as president of the Associated Press Media Editors, welcomes attendees to the #newsleaders2016 conference in Philadelphia.

Laura Sellers Earl was active in the North Coast chapter of ABATE, a group that promotes motorcycle awareness, education and safety.

Laura Sellers Earl, a former managing editor of The Daily Astorian who led the newspaper into the digital era, died Sept. 22 after a sudden illness. She was 57.

Carl Earl, her husband, the systems manager at The Astorian, described his wife of 31 years as “a champion of journalism. So much of her time was spent in making and promoting excellence in journalism.

“She loved life and her puppies. Sitting on the couch with a dog in her lap reading a book was a common sight in our house. She liked doing things her way. She learned to drive a motorcycle because she did not think I was doing it right. So she was going to show me how.

“We loved to travel and were planning our next trips for when travel restrictions were lifted. She loved giving out Super Awesome cards. She carried them with her all the time ready to reward anyone she felt was Super Awesome. These always brought a smile to the face of anyone receiving them.”

The couple moved to Astoria in 1992 when Carl Earl became the newspaper’s production manager. Sellers Earl worked as an advertising designer and editorial assistant before being promoted to managing editor in 1995, the first woman to earn the title.

She and her husband helped build the newspaper’s first website and, in 2000, she became the first internet editor for EO Media Group, The Astorian’s parent company.

Sellers Earl helped guide the company’s daily and weekly publications into digital publishing for 14 years before returning to The Astorian as managing editor in 2014.

She was also influential in the Associated Press Media Editors, a national group of newsroom leaders and educators. She was chosen as the APME president for 2016, a coup for an editor at a small-town newspaper. She was the co-director of NewsTrain, an initiative to provide training to journalists to improve their digital skills.

“The heart and soul of all journalism is in the belly of the newsroom,” she wrote in a column when she returned as managing editor. “I’m back in the guts of the news. Thank goodness.”

Sellers Earl stepped down as managing editor in 2017 but continued to work at The Astorian and other EO Media Group newspapers as an on-call editor and on special projects.

“We’re heartbroken,” said Derrick DePledge, the editor of The Astorian. “Laura was an innovator in digital publishing. She led by example through her work ethic and dedication to community journalism.

“Above all, though, she was kind. She nurtured her fellow managers as well as our reporters.”

Steve Forrester, the former editor and publisher of The Daily Astorian, who serves as president and CEO of EO Media Group, promoted Sellers Earl to managing editor. “When our managing editor Dan Carter left us, I thought Laura was my obvious choice,” he said in an email. “In her three years on the news desk, she had showed excellent news sense, and she was a good writer.

“Most importantly, her emotional intelligence and calm demeanor would make her a durable newsroom leader.”

Patrick Webb, who was her deputy before he became managing editor, described Sellers Earl as a “remarkable journalist in so many ways. She came up through the ranks and could do every job in the newsroom.

“Her style was to demonstrate such a caring nature toward her staff and colleagues that we all wanted to excel for her. She never bragged. Instead, she shared the credit for newsroom successes almost to the point of annoyance because she deserved a lot of the accolades herself.”

Sue Cody, a former deputy managing editor who worked closely with Sellers Earl over two decades, said she never thought of her as her boss, even though she was.

“She had a gentle way of guiding young reporters that inspired creativity and boosted their confidence,” Cody said in an email. “Even though she was the hardest worker I have ever known, she had an incredible sense of fun. Silly toys, games, prizes, all kinds of things would appear on her desk. When colleagues gathered outside the office, laughter prevailed. That is what I cherish — true friendship.”

Editors and reporters who worked with Sellers Earl remember how she provided a sense of security that deadlines — however improbable — would be met. She had a fondness for leather jackets, the odd gin and tonic and ending conversations, even tense ones, with words like “groovy” and “dandy.” She had a weak spot for exclamation points.

“She had a quiet voice, but when we screwed something up, she told us firmly and memorably,” Erick Bengel, a former editor of Coast Weekend, said in an email. “Although a newsroom is never stress-free, Laura made The Astorian a warm, welcoming place to work.”

Mark Mittelstadt, who got to know Sellers Earl through APME, described her as “warm, embracing, welcoming, positive. She was eager to help if I needed it and pitched in when it came time for the annual conference of editors.”

He remembered when Sellers Earl and her husband once taped paper middle fingers to wine bottles on the tables at a board dinner at Arnaud’s in New Orleans to tease an incoming APME president from Rochester, New York, who liked to extoll the virtues of wines from the Finger Lakes.

“One remembrance I saw today described Laura as APME’s ‘den mother,’ and I think that is pretty apt,” Mittelstadt said in an email. “She kept us organized, got things done, but also was ready to party when it was time.”

The couple enjoyed riding Harley-Davidson motorcycles and were active with the North Coast chapter of ABATE, a group that promotes motorcycle awareness, education and safety. They also loved their Welsh terriers, “Barley” and “Copper.”

Her family held a private memorial last weekend. Memorials in Sellers Earl’s name can be made in support of journalism training through the APME Foundation, via Paula Froke, 530 E. Allens Lane, Philadelphia, PA., 19119.

Offer a personal message of sympathy...

By sharing a fond memory or writing a kind tribute, you will be providing a comforting keepsake to those in mourning. If you have an existing account with this site, you may log in with that below. Otherwise, you can create an account by clicking on the Log in button below, and then register to create your account.

Add an entry as

Add an entry
Watch the guestbook. Stop watching this guestbook.

Funeral homes often submit obituaries as a service to the families they are assisting. However, we will be happy to accept obituaries from family members pending proper verification of the death.