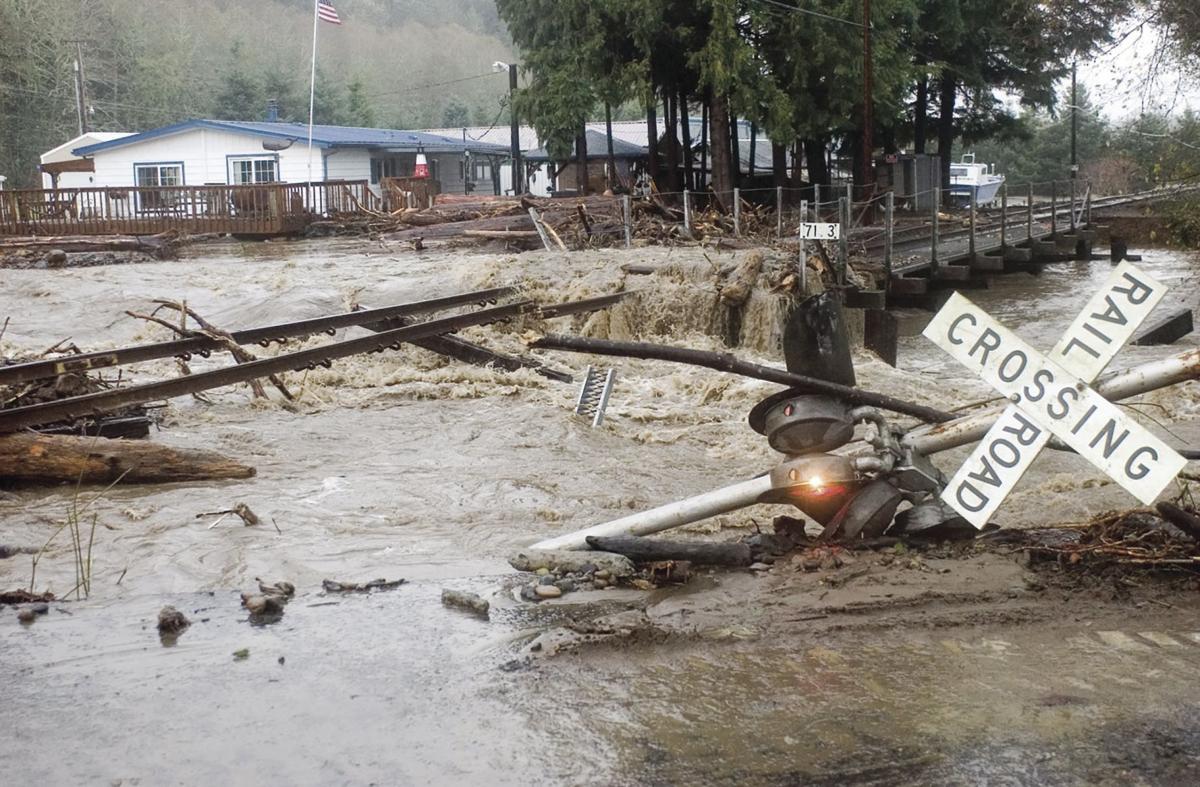 Water from Plympton Creek rushes under a railroad trestle Dec. 3, 2007 near the Westport Fire Department. 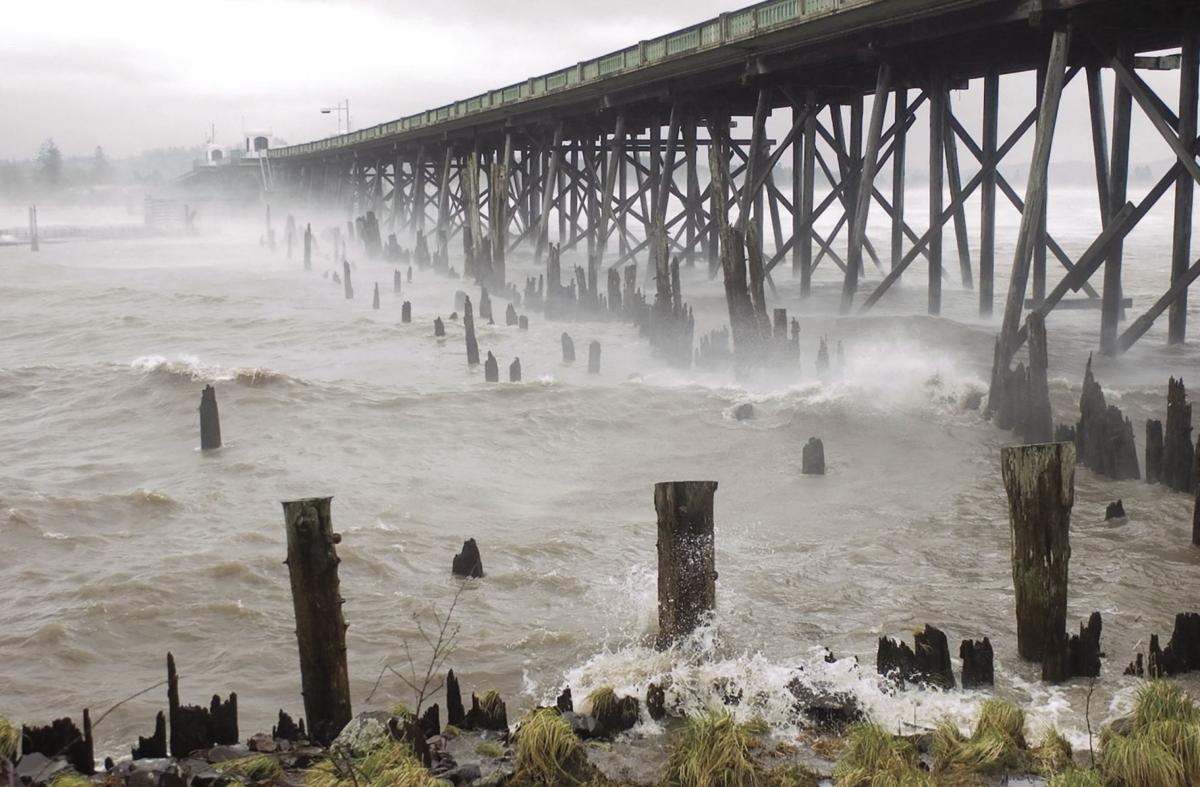 Spray from wind-driven waves whips beneath the Old Youngs Bay Bridge at the Astoria Yacht Club on Dec. 3, 2007.

Water from Plympton Creek rushes under a railroad trestle Dec. 3, 2007 near the Westport Fire Department.

Spray from wind-driven waves whips beneath the Old Youngs Bay Bridge at the Astoria Yacht Club on Dec. 3, 2007.

Rosemary Johnson felt strange admitting it, but she was having fun.

But she was only in the helicopter because hurricane-force winds had just pummeled coastal Oregon and Washington, knocking out power for days, felling trees, shutting down highways and inflicting severe damage on many homes and buildings.

Johnson had worked nonstop for days with other city employees and an army of volunteers to document the damage from the ground, creating a record to back insurance claims and secure emergency funding. Now she needed to get a bird’s eye view of the challenge ahead of her.

From the ground, she knew the damage was bad. From the air, she saw exactly how the wind had carved up the city. It looked like a giant had raised its hand and raked its fingers across Astoria.

The December 2007 storm is a local legend. It cut off Clatsop County and Pacific County in Washington state from the rest of the world for nearly a week.

Thousands of customers were without power for days. Different parts of the coast — different neighborhoods, even — experienced the storm differently. The wind blasted some areas, and left others more or less unscathed. For some people it was an adventure. For others it was horrific. Nearly everyone was inspired by the way their communities rallied to help each other.

Neighbors shared space in front of their wood stoves and fireplaces. They held community potlucks, feasting on all the food that was about to go bad — steaks, chicken breasts, halibut. They traded for propane. They built outdoor showers and toilets. Together, they listened to the eerie snap and thuds of hundreds of trees being torn up by the wind.

In the days after the storm, there were reports of people who narrowly missed being squashed by falling trees and families who were trapped in their houses until neighbors arrived with chainsaws. There were a handful of carbon monoxide poisoning cases, all related to people using barbecue grills inside. An elderly woman was found dead in her home after she apparently fell and struck her head while checking on a window that had shattered in the winds. A man suffered a heart attack while helping family members clear brush.

The wind knocked down bald eagle nests. It tore apart the Klootchy Creek Giant Sitka Spruce near Seaside, considered to be the oldest tree in Oregon and one of the oldest living things in the state. Creeks jumped their banks. Seafood processors were either lucky or unlucky, depending on where they were in their work when the power went out and the roads closed down. Several boats in dry dock keeled over on their sides at the Astoria boat basin. Mail piled up at the Astoria post office. Safeway employees threw away spoiled food by the cartful.

The storm came in two pulses, a sort of one-two punch. During a brief lull, Curtis Roegner, a fisheries research biologist with the National Oceanic and Atmospheric Administration based in Astoria, drove to Fred Meyer to stock up on supplies.

“There was nothing on the shelves except for kitty litter,” he said. He went looking for tarps; they were sold out.

The Columbia River was a bizarre blue and green color, pocked by whitecaps. The whole sky was churning, gearing up for the second blast. Wind whipped across the water. It looked like a fish going upriver, Roegner said. He watched “fists of rain” pummel the red Net Loft building built out over the water between Safeway and the Columbia River Maritime Museum. Huge chunks of roof flew away.

One Washington state woman drove 150 miles to check on her 85-year-old mother in Ilwaco. She drove through a dark Aberdeen, then a dark Raymond and a dark South Bend, but as she climbed the steps to her mother’s apartment, the power came back and lights flickered back on. Her mother had weathered the storm eating cold canned food — unaware of the soup kitchen set up across the street.

In Toledo, Washington, Kathie Oman Gomez remembers how the winds tore a metal carport from its concrete foundation and tossed it into a pasture. Her husband, a police officer in Centralia, was called into work to go door to door in a boat and get people out of flooded homes.

In Astoria, Roegner and his neighbors responded to a small landslide together.

In retrospect, it seems “perfectly natural” that the community would come together, Roegner said. “But at the time I remember thinking how great it was to be in a place where people really were helping each other.”

Still, as the days piled up and the county remained without electricity, roads closed in places, Roegner wondered if cracks would start to show. He thought about his trip to Fred Meyer.

“I kept thinking about those empty shelves.”

For most people, the storm meant work. Lots of work.

For David Robinson, pastor of the Cannon Beach Community Church, which acted as a shelter, the first question when the power went out was, “Who do we need to care for?”

At the Seaside Aquarium, staff manned a gas-powered pump, 24 hours a day, for five days to keep the animals alive. It was hard to get gas to run the pump because power was out at the gas stations. Then, a former aquarium employee who owned a landscaping company brought over extra gas cans. He wasn’t going to be mowing any lawns that week.

“We used that, then we siphoned gas out of our trucks,” said Keith Chandler, the aquarium’s general manager.

Ashley Lertora, a stewardship forester with the Oregon Department of Forestry based outside of Astoria, worked throughout the storm, pausing only for a day to take care of damage at her own home.

Lertora works with small, private landowners as well as industrial timber owners to set up logging plans and make sure forestry rules are followed. After the storms hit, she met people who told her they’d just bought their property. There were trees down everywhere. What should they do? What was the timber worth? For some people, the wind uprooted their retirement plan.

Lertora’s boss said, “Take a drive and see how far you can get.”

She made it as far as what was then the Weyerhaeuser office in Seaside, land now managed by GreenWood Resources. She asked the people there, “How bad is it out on the forestlands?” They told her they didn’t know. They couldn’t get a quarter mile from the office to see.

Logging operations to clear out downed wood occupied the local state Department of Forestry into the next winter. There’s still some timber out there, stuck in places too difficult to reach.

As the storm died down, Bob Bingham, Warrenton’s water treatment plant superintendent, was trying to cut his way through to reach the plant off Lewis and Clark Road in Seaside. He had lost communication with the facility about a day and half into the storm. He wasn’t sure if the backup generator was still keeping the machinery running, or if pipes had been damaged.

A crew of contractors with chainsaws and logging equipment worked their way slowly up the Lewis and Clark Road in Seaside toward the logging road that led to Warrenton’s plant. The trees fallen across the road were big and laced with downed power lines. Hours later, when Bingham reached his destination, the plant wasn’t running. The generator’s 400-gallon diesel gas tank was empty.

“We hadn’t had a real test on how long it would run but I know now,” Bingham said. “It’s two and quarter days.”

The way the community came together, and the way government employees and civilian volunteers mobilized, was inspiring, said Johnson, Astoria’s city planner. Since the storm, Clatsop and Pacific counties, and the cities up and down the North Coast, have put even more resources and plans in place.

“In the end, the storm had so many positive things to really reinforce (to) the people how strong we are together,” said Mary Blake, former director for the Sunset Empire Park and Recreation District.

The storm helped many communities see the gaps in their emergency preparations.

In Manzanita, just across the Clatsop County line and where residents struggled more with power loss than wind-related damage, the 2007 storm has some competition. There was the Tillamook County flood in 1996 when President Bill Clinton declared a state of emergency. In 2016, a tornado cut through the middle of Manzanita.

“In any year, Tillamook County can have any manner of emergencies or disasters,” said David Dillon, board secretary for the Emergency Volunteer Corps of Nehalem Bay.

What the 2007 storm did, however, was sharpen locals’ awareness of their isolation, he said. The storm was the catalyst that focused community emergency preparedness efforts and ultimately led to the formation of groups like the Volunteer Corps.

“Our emergency response had been geared for a Cascadia earthquake and tsunami, with the idea that if we prepared for that we would cover the other hazards,” said Jay Raskin, an architect and, in 2007, the mayor of Cannon Beach. “The storm taught us that different hazards require different responses.”

But, Johnson said, “We’re human. The longer it is away from an event, the more it gets forgotten and takes a back seat.”

At the eastern edge of Astoria, there is a reminder — in case anyone forgets — of what swept through here a decade ago. In the woods around the Emerald Heights apartment complexes stand the trunks of trees whose tops were snapped off by the wind.

“It’s a scar,” Johnson said, “that is still very visible.”

European Tour CEO: Why the Ryder Cup was postponed