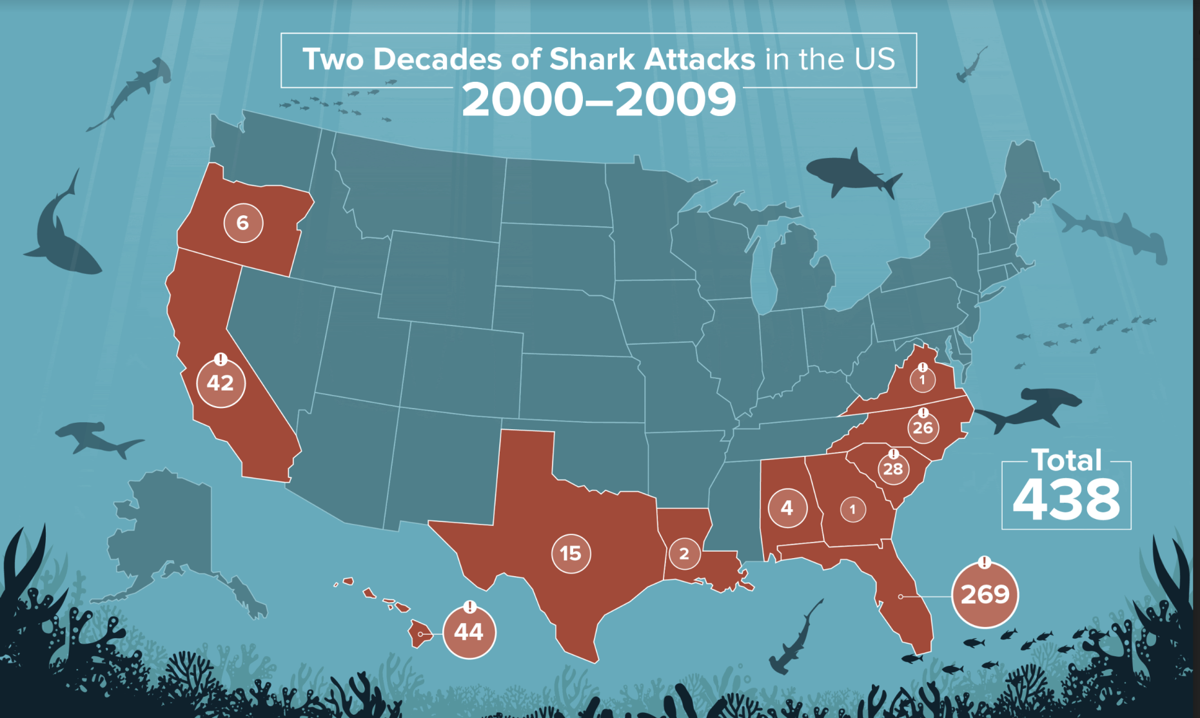 Shark attacks are relatively rare, according to Katie McEntire of the home security company Safewise.

When they do occur, most victims are surfing or swimming before the attack. In 2019 so far, there has been only one fatal attack in the U.S.: a 65-year-old swimmer in Hawaii. In 2018, a 26-year-old boogie boarder in Massachusetts was also fatally attacked.

Shark attacks have increased in the Northeast in recent years due to warming ocean temperatures, leading to more dangers in states like the Carolinas, Massachusetts, and New York. Oregon had nine shark attacks between 2000-2009, they report, and six in the past decade.

Out of the 91 million recreational swimmers in the U.S., there are only about 44 attacked by sharks each year.

There have been only 17 fatal shark attacks in the last 20 years in the US, eight in the past decade and nine the decade before.

Florida and Hawaii hold the top spots for most shark attacks out of any other coastal states.

Since 2000, Florida has consistently had more shark attacks than any other state. Of the 487 attacks in Florida during the past 20 years, only three have been fatal. Hawaii comes in second with a total of 117 shark attacks but more fatalities. Since 2010, Northeastern states like Massachusetts, New Jersey, New York and Maine have seen an increase in attacks.

On a global average, only six people die from shark attacks each year.

Men are more likely to fall victim to shark attacks perhaps because they participate in activities like surfing, diving, and long-distance swimming more often than women. Since 2000, one in four victims were female, and three in four were male.

Over 375 shark species swim the oceans, but there are only three responsible for a majority of attacks. The famous great white sharks, tiger sharks, and stout bull sharks are often the culprits and tend to live in warm waters of the Atlantic and Southern Pacific.

For most people, the risk of being attacked by a shark is 1:738 million. If you’re a surfer, it’s 1:17 million, and it’s 1:136 million if you’re a scuba diver. Overall, shark attacks shouldn’t concern average Americans.

Hopefully, you’ll never encounter a wild shark in the open water, but keep these tips in mind.

Swim together: Most sharks attack individuals because they mistake humans for other creatures like seals.

Keep the shore in sight: Straying too far from shore will leave you isolated from help and farther into shark territory.

Don’t swim at night: Sharks are most active at night and hard to see in the dark.

Don’t ignore shark warnings: It’s common sense, but don’t enter the water during a shark watch. Signs posted on the beach indicate any dangers, so be sure to stay vigilant.

Watch for sandbars and ocean drop-offs: These spots tend to be rich in wildlife perfect for shark snacks. Be extra careful in these areas.

Watch for sea life: Sharks eat fish and other aquatic critters, so be careful in areas like reefs and sandbars.

If you do run into a shark, keep your cool and remember these tips.

Exercise common sense: Be alert when swimming in the ocean. You are entering the shark’s territory, so respect the shark and its natural habitat.

Maintain eye contact: Sharks hunt by ambushing their prey. If you see a shark circling you, be sure to watch it carefully to show it’s lost the element of surprise.

Don’t splash around: If you encounter a shark, don’t panic. Splashing and thrashing in the water will only entice it. Sharks have been known to give “exploratory bites” when they encounter something new (like humans). The best thing to do is to lose the shark’s interest.

Don’t swim at river mouths and estuaries: These areas are a favorite hangout of bull sharks. The mix of salt and fresh water create a fertile environment for animals that are sharks’ preferred prey.