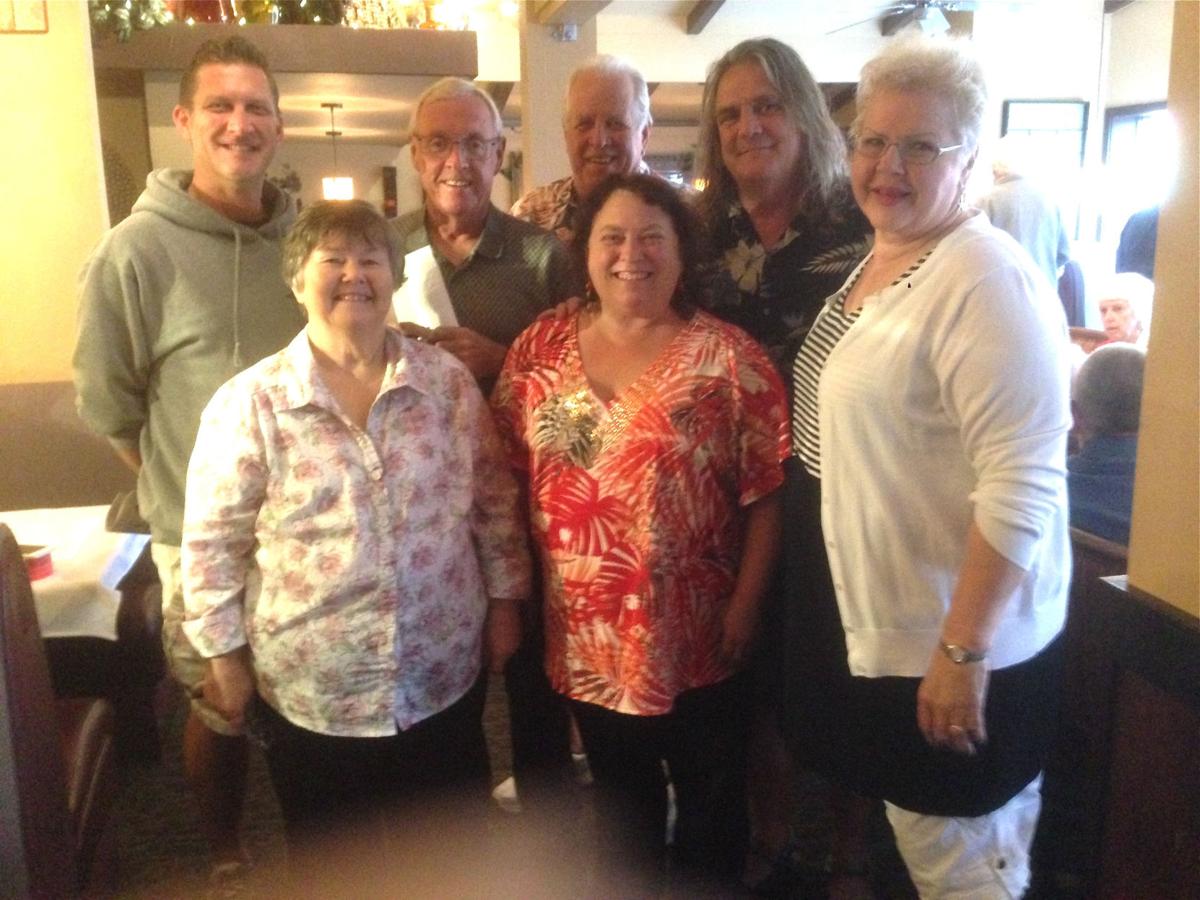 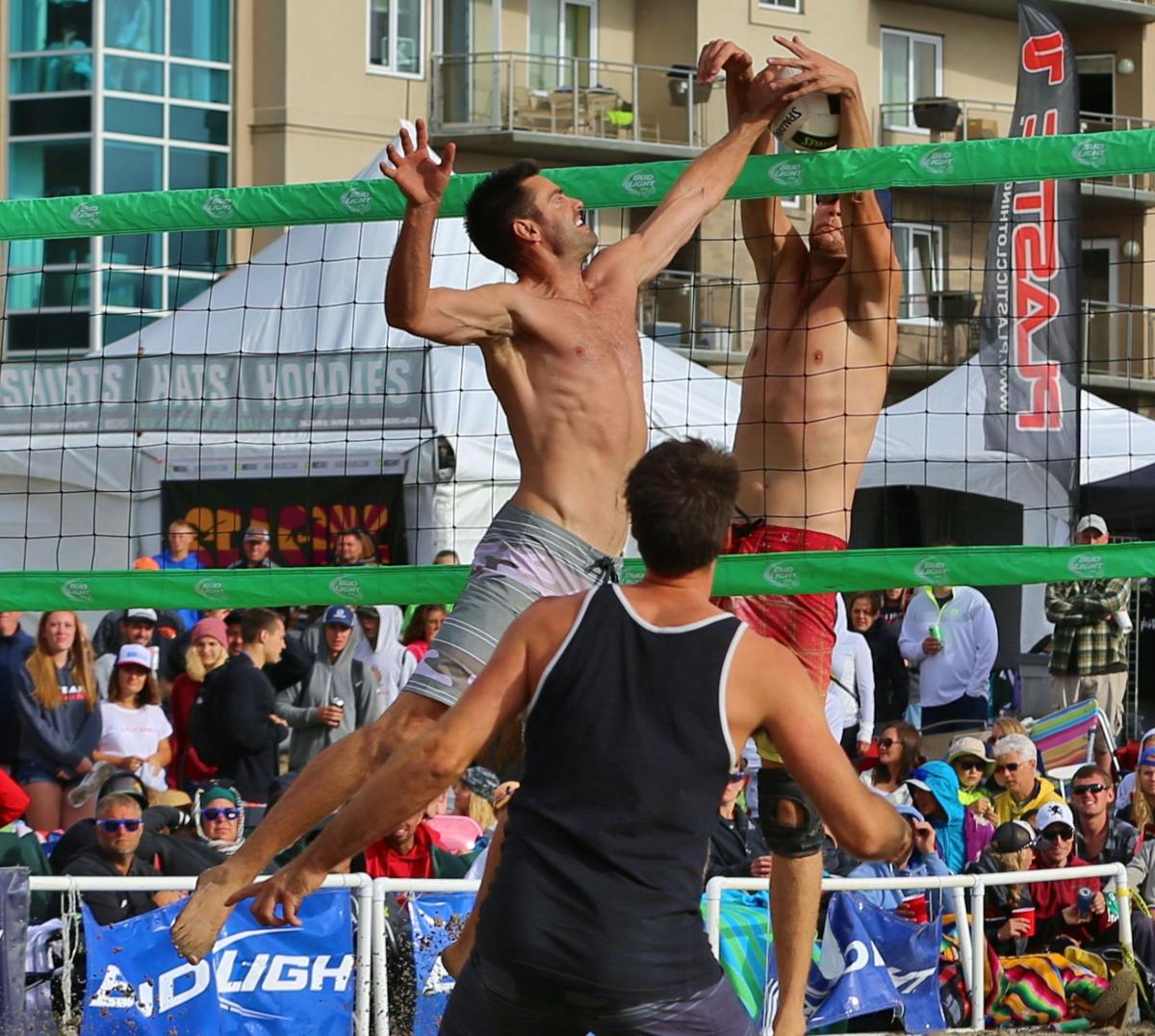 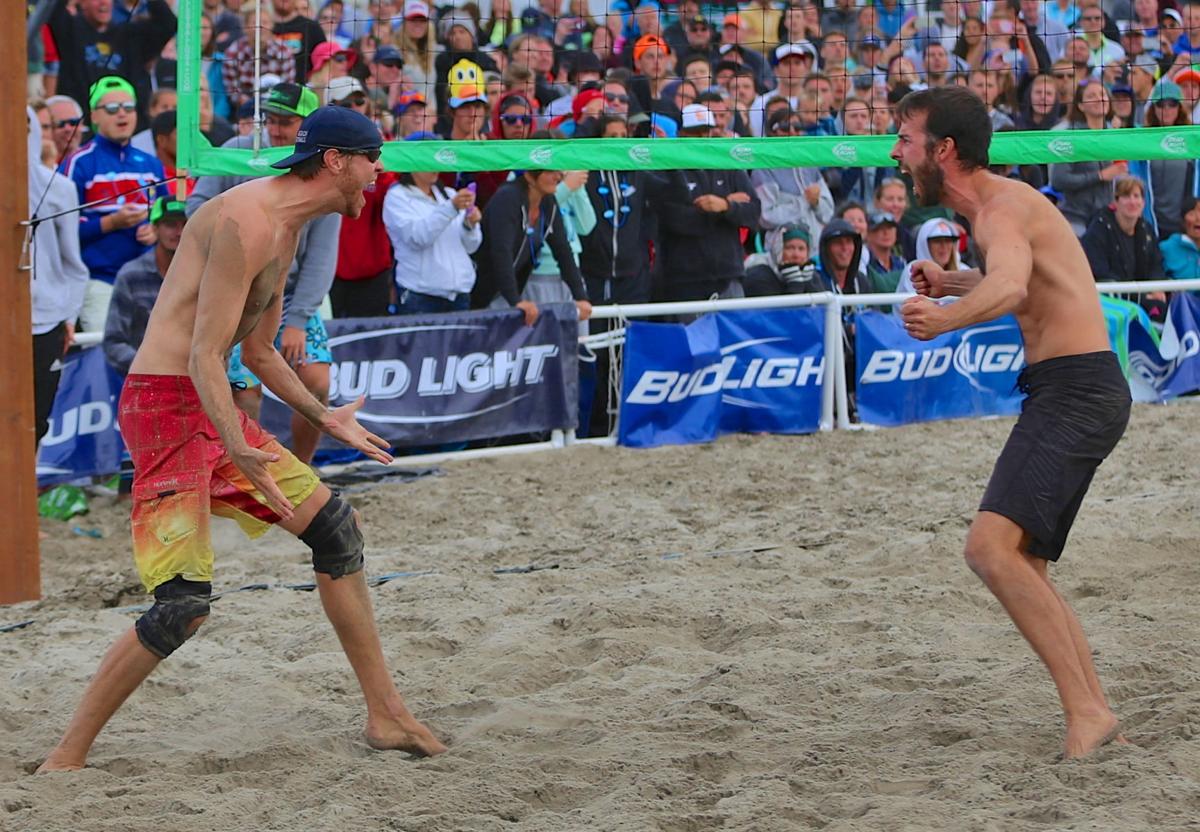 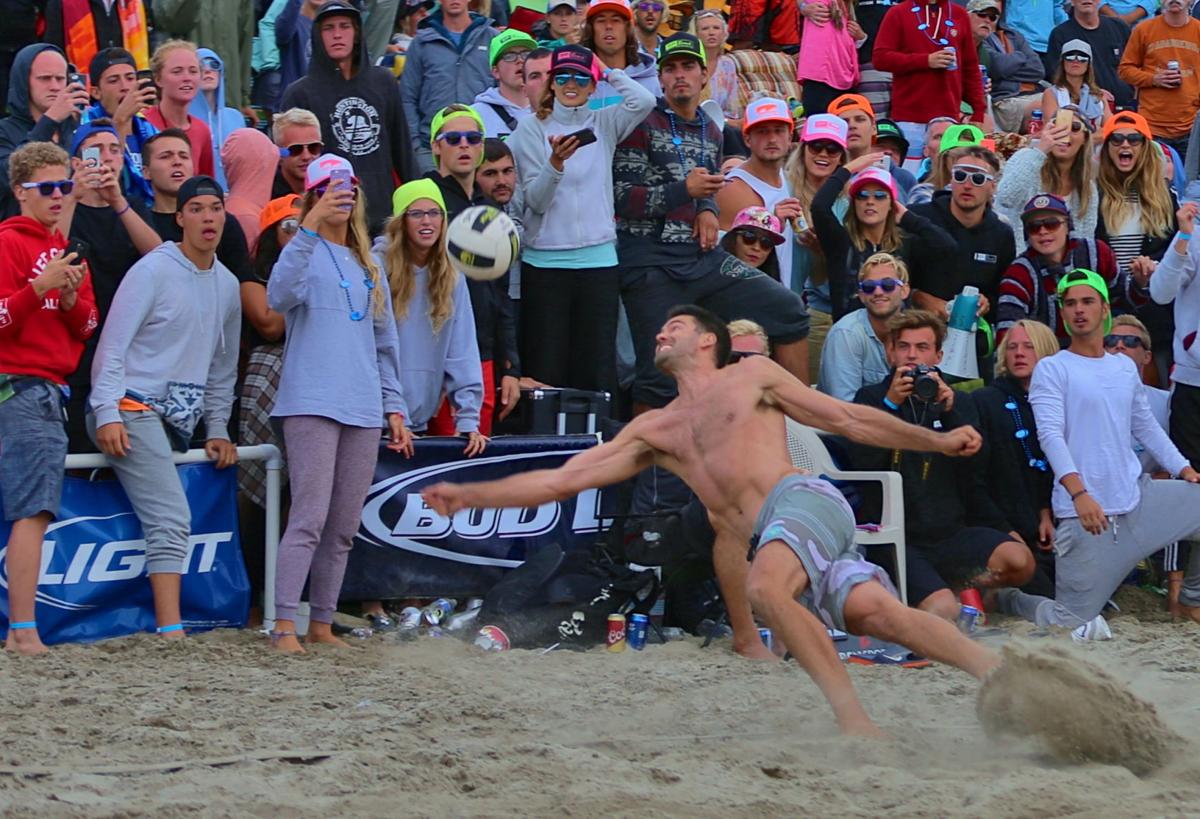 A member of the Casey-Casey team tries to save a ball in Saturday's championship match. 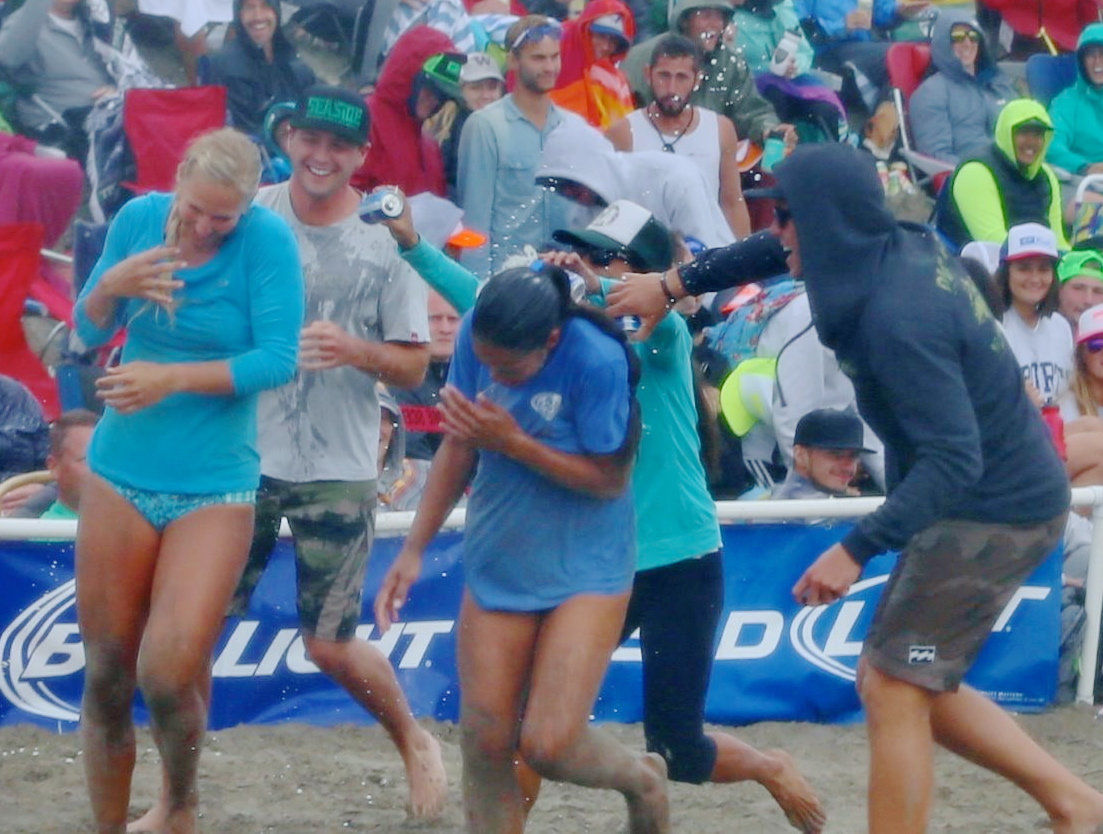 The doubles duo of Ramsey-Hinkley is doused after their victory in the Women's Open Championship Saturday.

The stage was set Thursday for the Seaside Volleyball Tournament.

A member of the Casey-Casey team tries to save a ball in Saturday's championship match.

The doubles duo of Ramsey-Hinkley is doused after their victory in the Women's Open Championship Saturday.

The stage was set Thursday for the Seaside Volleyball Tournament.

Longtime Seaside Chamber of Commerce events coordinator Doug Barker will step down from his pivotal role with the Seaside Beach Volleyball Tournament. Not that he hasn’t tried before — this is considered his “third annual retirement.”

According to chamber members, Barker’s title of events coordinator doesn’t begin to cover his role in the tournament’s success.

“We can never replace Doug Barker,” Seaside Chamber of Commerce President Susan Huntington said at the chamber’s weekly breakfast at Twisted Fish, Friday, Aug. 14. “Honestly, if we were going to split Doug, we’d need a couple other people.”

When a visitor stepped on beach on the glass, it was Doug Barker who responded, she said. When workers were needed to break down tents, he found helpers from the fire department.

“Doug was everywhere at the volleyball tournament,” Bruce T. Smith of North Coast Records added. “He was fixing electrical stuff. He was handing out salt bags. When the wind kicked up, he personally buried those pole tents. Doug, thank you.”

“This town has gotten spoiled by him,” Huntington said. “Would we be expected to find somebody who’s also an EMT and a firefighter?”

Barker’s retirement comes on the heels of one of the most successful tournaments in its history.

“We had a few hiccups, but overall it was the best I’ve seen,” volunteer Sandy MacDowall said. MacDowall, along with Cheryle Barker managed the registration tent.

“But nobody left their seats,” he said.

When one construction crew was short-handed, Barker coaxed three members of Seaside Fire and Rescue to help out. Barker said the crew was “the best I’ve had. Tents were set up in record time.”

Organizers had originally contracted the services of a Portland-based commentator to provide play-by-play for main events, but quickly discovered he was unprepared for the event. Radio production director Ken Heman of Ohana Media Group and Bruce T. Smith of North Coast Records were pressed into duty.

“We were literally looking at Wikipedia, ‘What’s the difference being a dig and a save?’” Smith said.

Despite unfamiliarity with the finer points of the sport, chamber members heard reports that their effort was the best commentary the tournament has had.

Wait till next year!

In 2016, chamber member Glen Rogers will assume many of the duties previously handled by Barker, including driving the front-loader, getting courts set up and taken down.

As for play-by-play, Smith and Heman are eager to step back into the announcers’ booth. Smith told chamber members he had already purchased a beach volleyball rules book to help prepare for next year’s tournament.

Along with a new events manager and announcers, the chamber will be awarding a new contract to a volleyball association to manage the sports aspect of the event.

The chamber’s three-year contract with North Pacific Beach Volleyball Association expired this summer. The chamber is considering bids from NPVBA and groups throughout the Northwest, including Portland and northern California.

Chamber members also anticipate an increase in vendors and sponsorships. This year many vendors were so successful they ran out of product, Huntington said.

With corporate sponsors like Budweiser, Rite-Aid, Clif Bar and the National Guard, Huntington said she anticipated that list would grow. “Our goals wrap around not only having hundreds more teams than we’ve ever had before, but to keep running a smooth operation, trying to incorporate into the community,” she said. “It’s been a beast, like having an electric eel in your hand.”

A record 1,509 teams came to Seaside for the tournament, the largest amateur event of its kind.

Divisions ranged from parent-and-child to Masters 55+, along with Men, Women and Co-ed Open Divisions that featured current and retired Associated of Volleyball Professional ranked players.

The team of Ramsey-Hinkley won the Women’s Open Championship Saturday, followed by a victory for Matt Lebourdais and Jonny Wiskar in the Men’s Open title match.

Astoria’s Noelle Lund and Danielle Moyer finished in the top 16 out of 43 teams in the Women’s BB doubles division, while the tournament draws players from around the state, the Pacific Northwest, and usually a number of competitors from Canada.

Van Jones on Trump: This dude is in desperate need of money