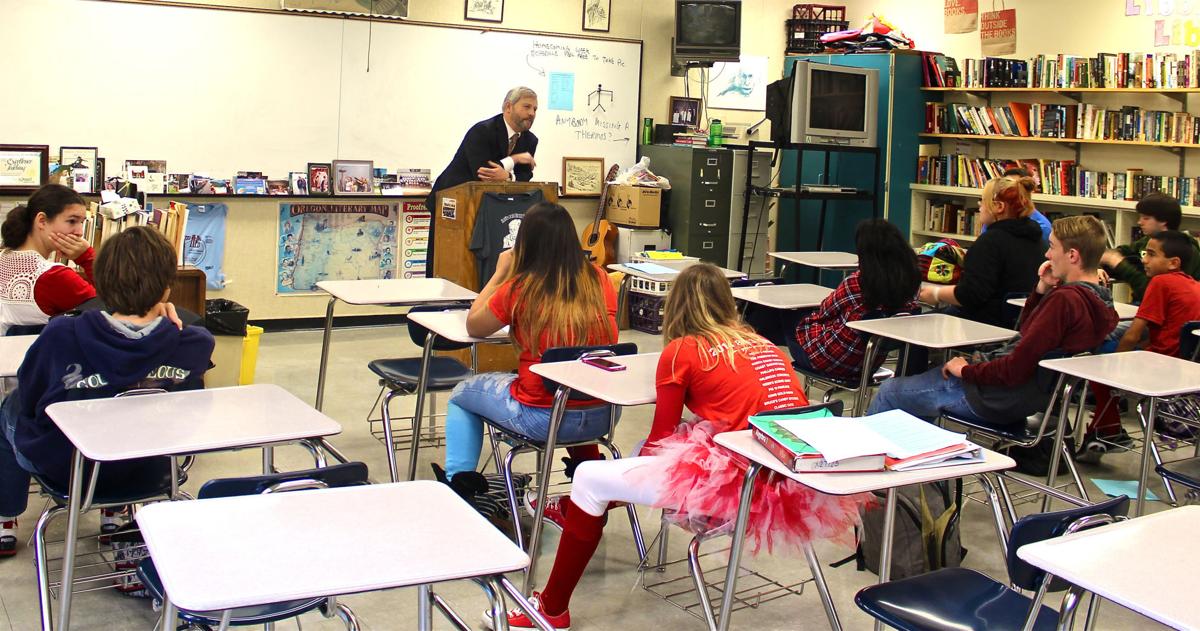 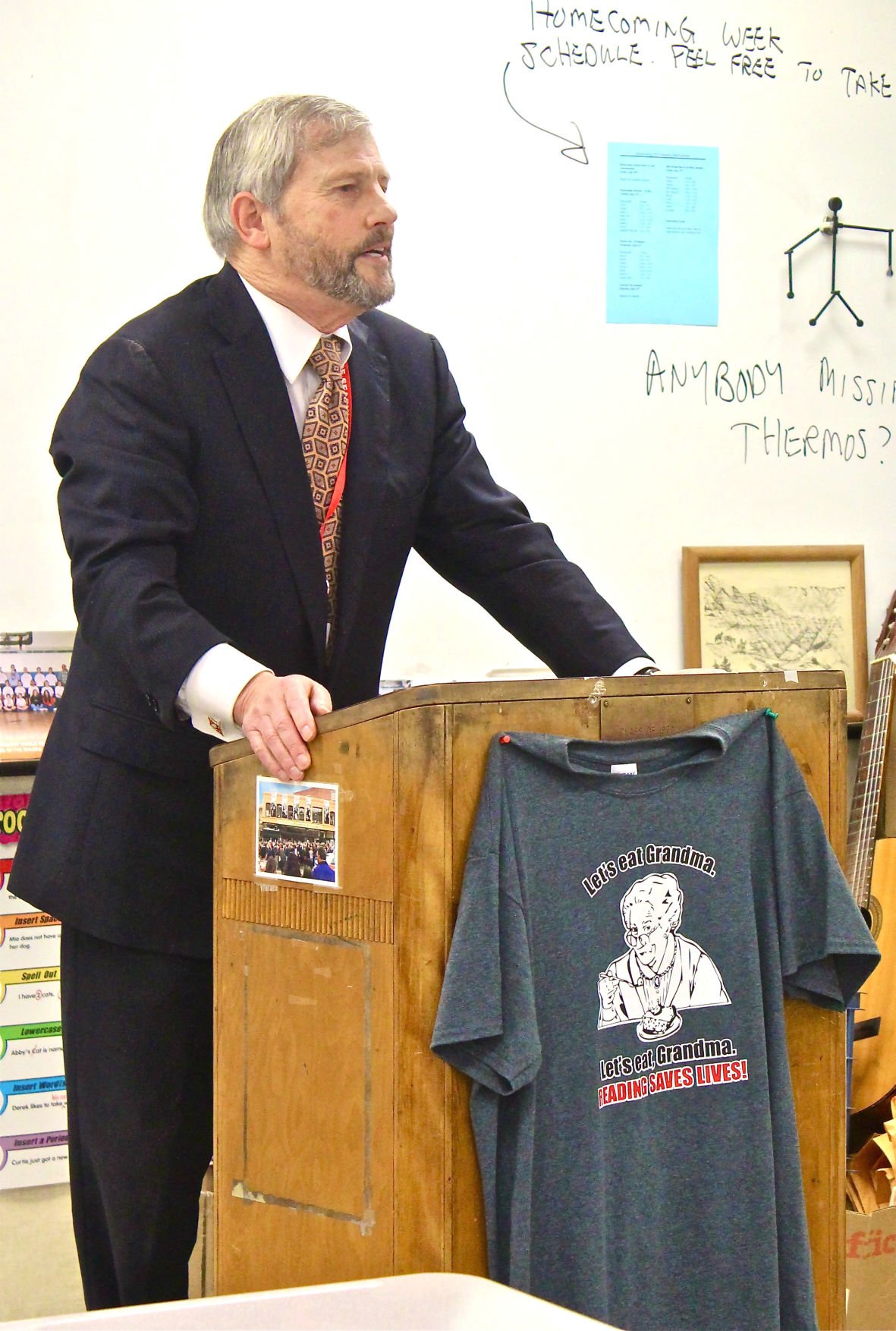 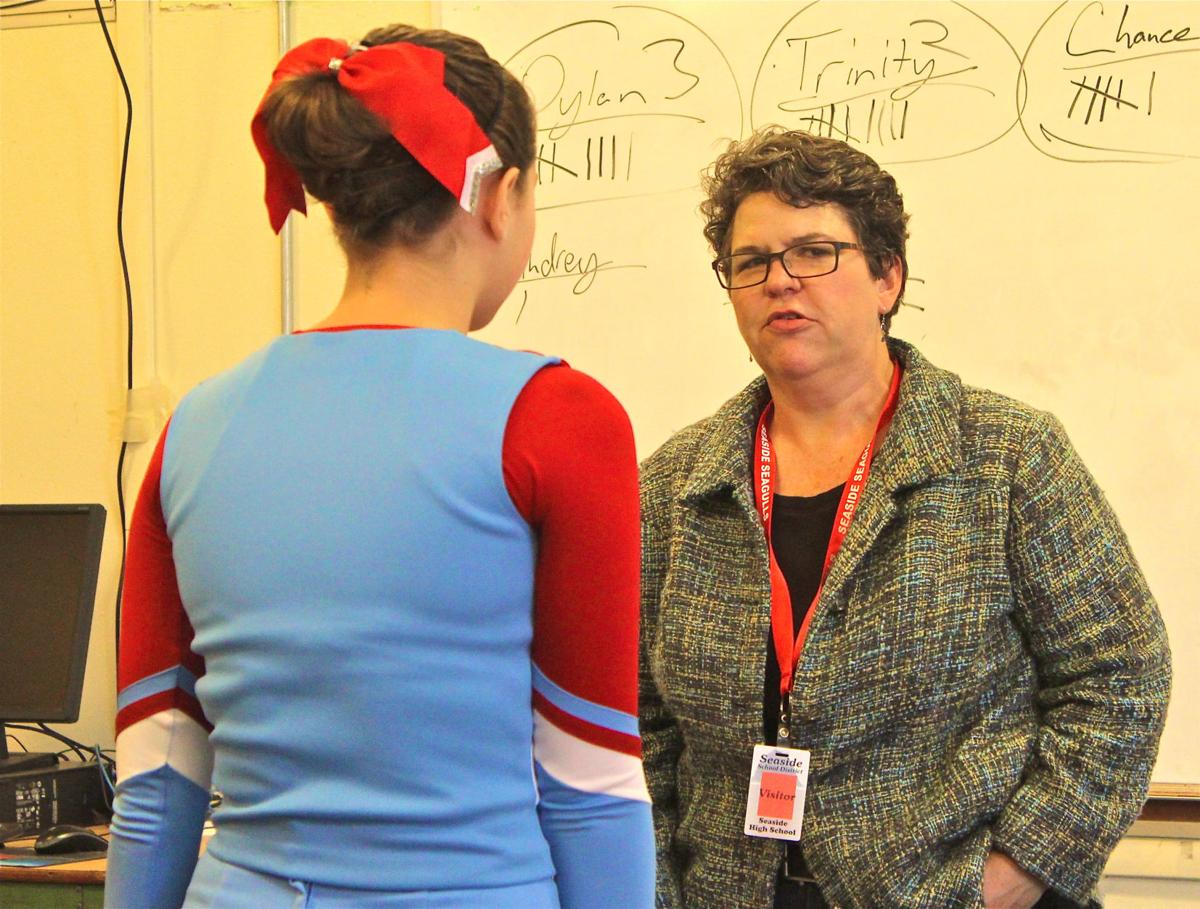 Author and motivational speaker Polly Campbell, a member of the Seaside High School Hall of Fame, speaks with a student after giving a lecture at the school Sept. 25, in advance of the 2015 induction ceremony Sept. 26.

Author and motivational speaker Polly Campbell, a member of the Seaside High School Hall of Fame, speaks with a student after giving a lecture at the school Sept. 25, in advance of the 2015 induction ceremony Sept. 26.

If national best-selling author and Seaside Hall of Fame member Karl Marlantes could do anything in his life differently, he told Seaside High School students during the 2015 Hall of Fame Program held Sept. 25, “I would have talked to more girls.”

Not “hooking up,” he clarified, as several students laughed. But life brings us in contact with lots of interesting people, and Marlantes wishes his shyness had not kept him from getting to know and befriend more of those people — especially members of the opposite sex of whom he was particularly intimidated.

The question of what he would do differently was one of several posed by high school students listening to Marlantes share about growing up in Seaside, fighting in the Vietnam War, working as an international consultant and writing an award-winning novel that took more than 30 years to publish.

Marlantes was born in Seaside in 1944, attended Seaside High School and graduated in 1963. “A lot is the same,” he said. He played football on a team that went to a state championship; worked in the cafeteria scraping dishes alongside his grandmother, the school’s cook; and roamed the same halls and classrooms as the students who attend the high school today.

One big difference was that for Marlantes and other male high school students, the draft hovered in their future like an unappealing inevitability.

“It was kind of like income tax,” he explained. No one wanted to do it, but everyone expected to, he added. At 18, he enlisted in the United States Marine Corps.

On a National Merit Scholarship, he attended Yale University for undergraduate studies. From there, he became a Rhodes Scholar and spent a term at University College in Oxford, England. However, guilt from seeing his fellow classmates serve overseas drove him to volunteer for active duty. In a matter of days, he was dropped in the Vietnam jungle with other service members to fight in a war that would be the topic of his award-winning book, “Matterhorn: A Novel of the Vietnam War.”

Marlantes finished the book in the 1970s, after returning from combat and finishing his education at Oxford. It took 35 years after its completion to get the book published in 2010, he said. A year later, after “Matterhorn” met with success, Marlantes published a second book, “What It Is Like To Go To War.”

The formula to finding success as a writer, he told students, is “a combination of keeping your head down and not giving up, and luck.”

“It’s the nature of the beast; it’s an industry,” he said.

Marlantes recently completed a third book, which now sits in the hands of his publisher, along with his hope.

“Even after two successful books, as a writer, you don’t know,” he said.

The key is to approach writing like any other job: you get up in the morning and do it, whether you feel like it or not, he said.

Author Polly Campbell, class of 1986, also touched on the writing profession. She sencouraged the the young listeners to confront obstacles and adversity with the belief that “you can do this.”

Campbell grew up in Seaside, a member of Seaside Heights Elementary School’s original class. In first grade, she was diagnosed with juvenile rheumatoid arthritis. Because of that, she said, “I learned early on that I wasn’t ever going to fit in, in the way I wanted.”

“It has influenced, in the best way possible, everything I do today and everything I’ve done,” she said.

In lieu of playing outside during recess, she spent hours in the library, poring over biographies of world-changing leaders, like Mahatma Gandhi. One thing she found in common between these celebrities and leaders, along with herself, was they all faced difficulties and overcame them.

Instead of backing down from adversity, large or small, she advised students, “get curious about it.” Growing up, she wanted to play basketball, an activity seemingly incompatible with her affliction. She started as a manager for the high school team — learning to keep score so they’d have to take her along to games, she joked — and she would fill in at practices. Finally, she got the chance to play in a game. She didn’t do it particularly well, but she did it, and that sense of accomplishment is what she remembers, she said.

“I created that experience for myself,” she said.

Throughout life, the students will receive a lot of feedback from others, both negative and positive.

“Weed out what’s accurate for you,” she said. “When you know you’re capable of coping and managing and learning from your decisions, you’re free to do anything.”

Lastly, she encouraged the students to participate in their lives and engage experiences surrounding them.

Create “a life that makes you happy,” she added. “Own both your success and failure. When you are accountable for the things that don’t go well, you can reap the awards of what does go well.”

Bernie Sanders is rising in the polls. Here's why

Warren: I don't think of this in terms of the politics