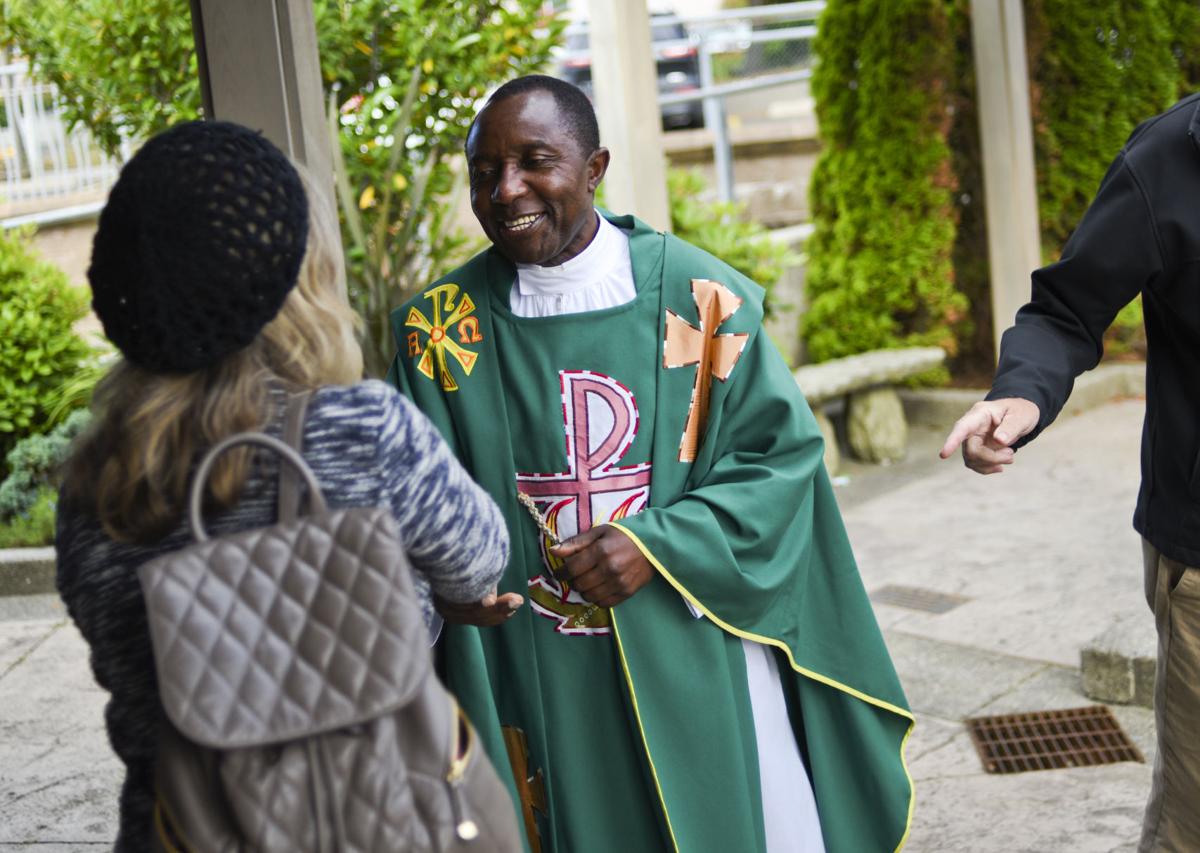 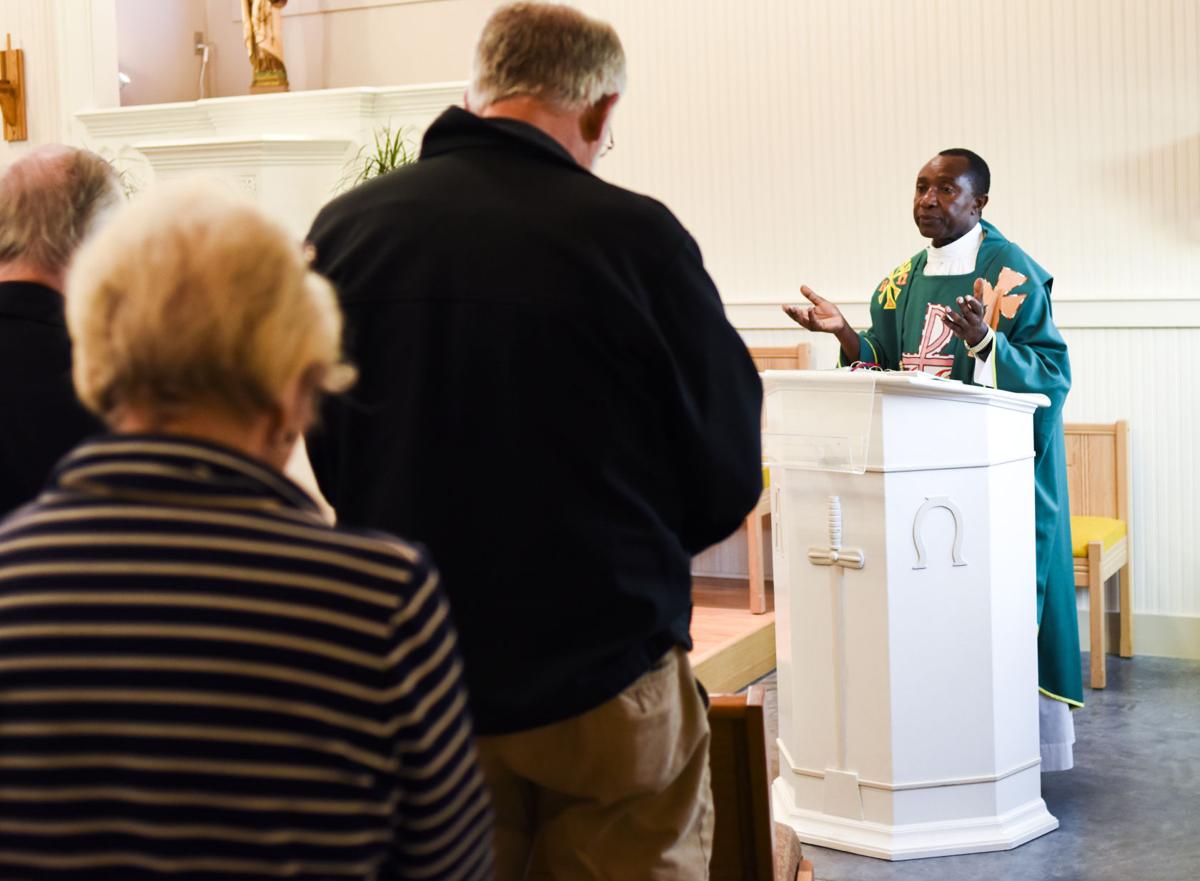 Father Nicholas Nilema speaks during morning services at Our Lady Of Victory Church in Seaside. After 18 years with the church, Nilema will be leaving for Tanzania. 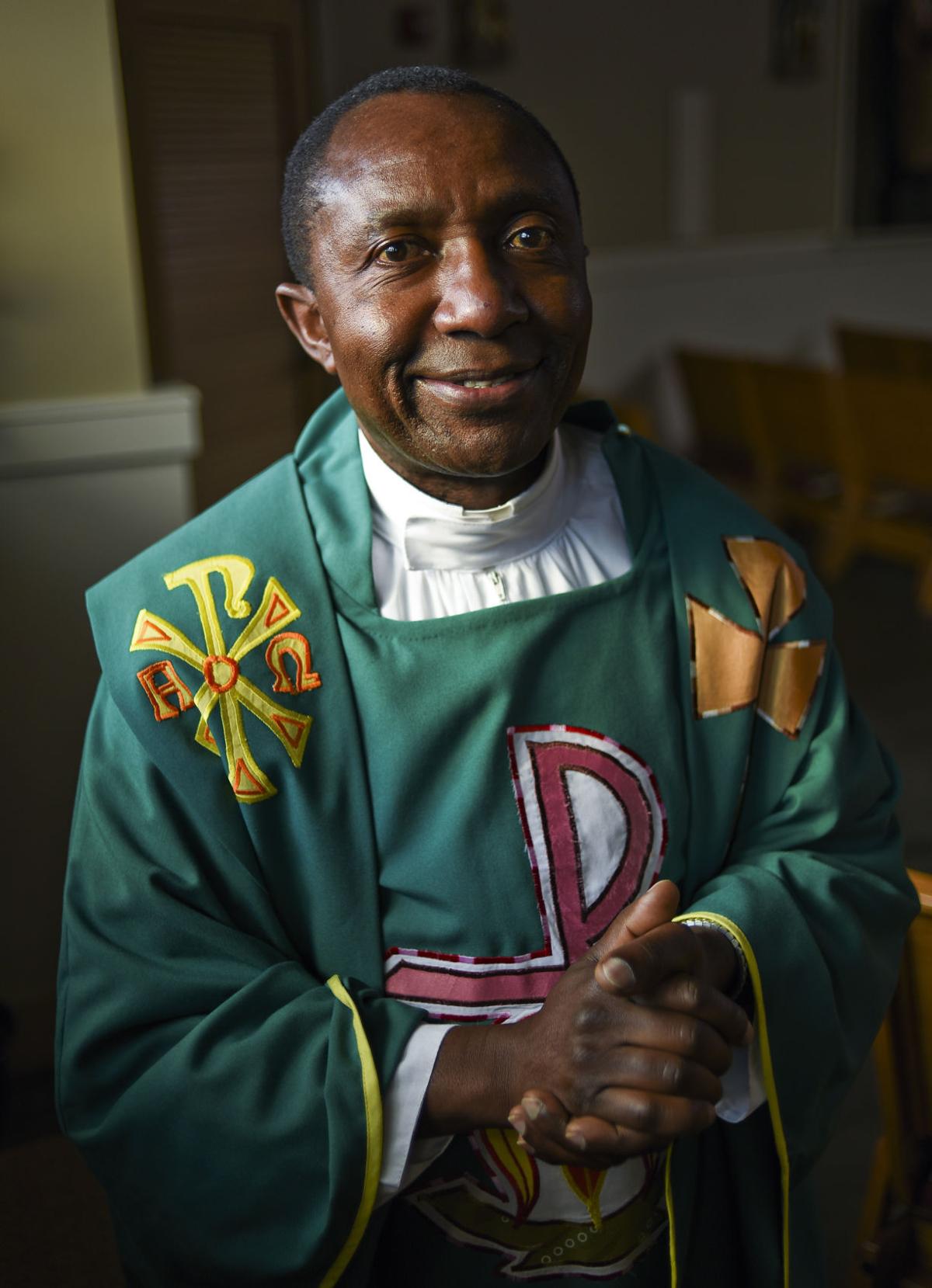 Father Nicholas Nilema poses for a portrait after delivering morning services in Seaside. After 18 years with the church, Nilema will be leaving for Tanzania.

Father Nicholas Nilema speaks during morning services at Our Lady Of Victory Church in Seaside. After 18 years with the church, Nilema will be leaving for Tanzania.

Father Nicholas Nilema poses for a portrait after delivering morning services in Seaside. After 18 years with the church, Nilema will be leaving for Tanzania.

Father Nicholas Nilema —Father Nick to all — is preparing to leave Seaside at the end of July, and his “family” here is already missing him.

“I will miss them here too,” Nilema said. “It’s really a family, my family. For us as missionaries, everywhere we go or are sent, we make a family.”

During his 18 years in Seaside as pastor of Our Lady of Victory, Nilema counted as his accomplishments the rebuilding of the church, outreach to the homeless and partnerships within the community.

“It’s a loving, caring community,” Nilema said. “People’s needs are the same everywhere. When people lose a loved one or family members, it’s the same.”

Flashing his famous smile, he added: “Except there are some differences in the social aspects.”

Raised in Tanzania, East Africa on the slopes of Mount Kilimanjaro, the high mountain in Africa, Nilema attended seminary to study accounting before his call to the ministry. He served with a small parish near Mwanza in the Lake Victoria region, before an assignment at Saint Therese Parish in east Portland in July 1992 as a member of the Associated Life Community of Priests, a missionary order that fills the need for priests.

In 1997 Nilema arrived in Seaside, which, he said, was even smaller than his Tanzanian birthplace. He devoted his attention to the community, especially the ill, the elderly and those will special needs. He formed a ministry at Providence Seaside Hospital and administers to families in Astoria at Columbia Memorial Hospital. He is a key founder of the emergency shelter with Alan Evans of Helping Hands Reentry Program in Seaside. He initiated a Sunday Supper at the church that has nourished thousands in his years here. His ministry extends from Astoria to Wheeler. “My family here is not only the Catholics,” he said. His calling, he said, is to serve all people.

Dedication of the new 8,400-square-foot church in 2012 was the culmination of a 20-year effort by congregants, replacing the 97-year-old Our Lady of Victory Catholic Church with a new building more than twice its size. At the time, church council President Chris Rose credited Nilema for moving ahead despite the obstacles.

“We had four priests before Father Nick who all knew we needed a new church,” Rose said. “Father Nick had the courage to say, ‘Let’s do it.’”

The building features a hand-carved life-size wooden crucifix from Nilema’s homeland of Tanzania.

Working with law enforcement in Seaside is a role Nilema has participated in since his arrival. “When they need my help, they call me, when I need their help I call them,” Nilema said.

Nilema was especially close with Sgt. Jason Goodding, the Seaside police lieutenant shot while making a felony warrant arrest in February. “With Jason it was heartbreaking because I worked with him so closely,” Nilema said.

In mourning Goodding earlier this year, Nilema called the death “a big, big loss for our community.” The officer had a passion for what he was doing, and “he was so willing to ask for help” when he needed advice or support to better serve Seaside.

“He was always telling me, ‘You know, Father Nick, we have to put our efforts together to help take care of our people,’” Nilema said.

Nilema is returning to the Moshi Diocese in northern Tanzania.

Arriving in Seaside will be a longtime colleague of Nilema’s, Joseph Barita, 59, of Moshi, Tanzania. The two men grew up in the same town in East Africa, and studied together at a seminary as young me. Barita and Nilema were ordained together — July 3, 1988 — and both have served in Oregon parishes. He first served in the United States in the Archdiocese of Los Angeles, coming to the country in 2000. From 2010 to 2014 Barita served as pastor at St. Frederic in St. Helens.

Barita returned briefly to Tanzania when his father was ill, but is now returning to Seaside to take on the responsibilities of his predecessor.

A farewell celebration takes place tonight, Friday, at Our Lady of Victory Parish Hall from 4 to 7 p.m. and at St. Peter the Fisherman Parish Hall in Arch Cape on Saturday, June 25, after the 5:30 p.m. Mass. The entire North Coast community is invited.

A special story to tell

Parishioner Mike Davies has a special story to tell of his longtime friendship and inspiration from Father Nick. “Thanks for reaching out to me regarding Father Nick and his imminent departure. I have a very personal and unique relationship with the man — with stories that might fill volumes. I’ve been associated with him for almost his entire 18-plus years in Seaside — in a wide variety of different roles. Initially I was one of his many new parishioners at Our Lady of Victory — a non-Catholic parishioner at that!

“But, as a result of his incredibly gregarious nature, we very quickly became friends. That friendship was cemented in 2001 when my family traveled with him and 12 other parishioners to visit his home in Tanzania, East Africa. The incredibly moving visit to his home parish high on the slopes of Mount Kilimanjaro was life changing — to say the least!

“Since that first visit, I have returned seven more times —each time accompanying visitors from around the United States and Canada. The strong personal relationships forged during these visits have broadened our world and our family — we now have an “adopted” extended family in Tanzania — including our new, 9-month-old ‘grandson’! My family — and our parish — are forever tied to Tanzania via the bonds forged by Father Nick!”

Fareed: This is how Republicans keep their power

What to expect from debate moderator Chris Wallace