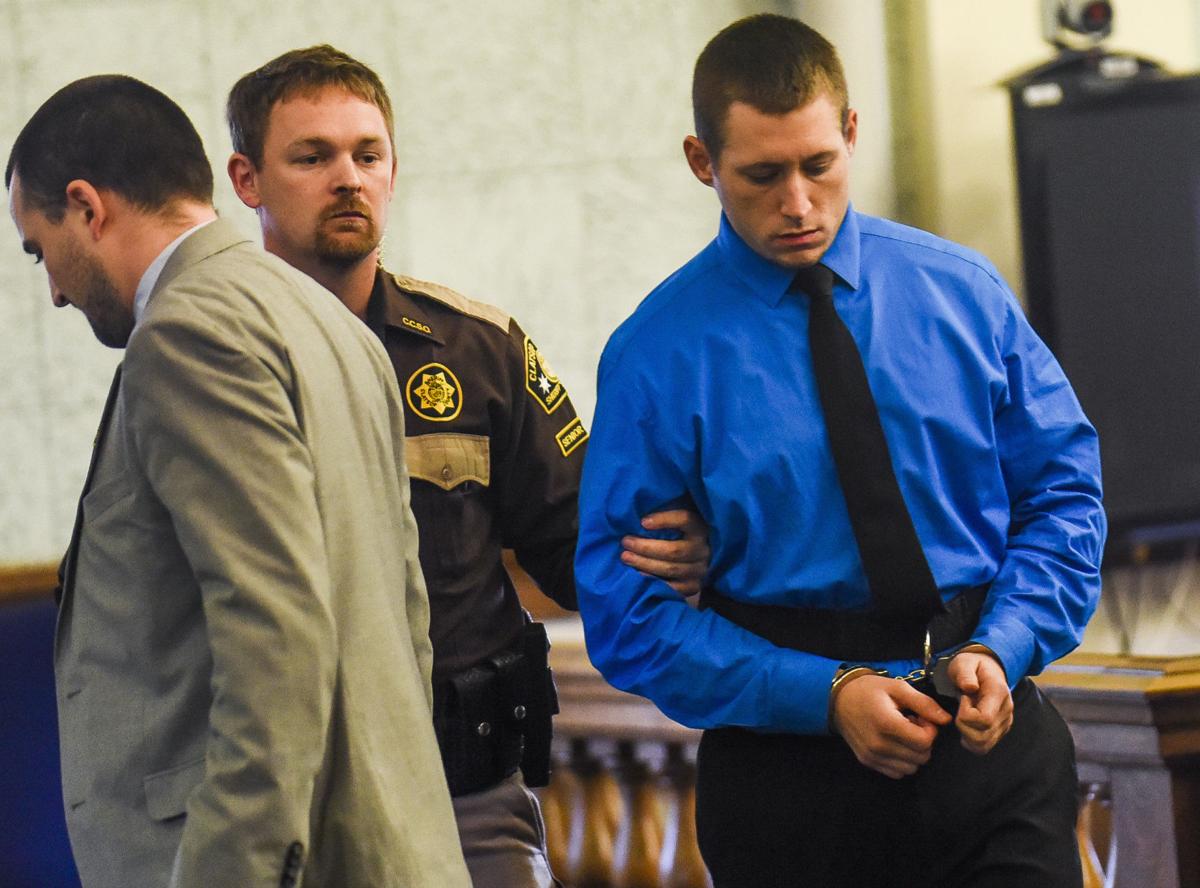 Randy Roden exits the courtroom after his verdict is read Monday at Clatsop County Circuit Court in Astoria. Roden was found guilty of murder by abuse, manslaughter, criminal mistreatment and assault but was acquitted of other murder charges that could have carried the death penalty or life in prison. 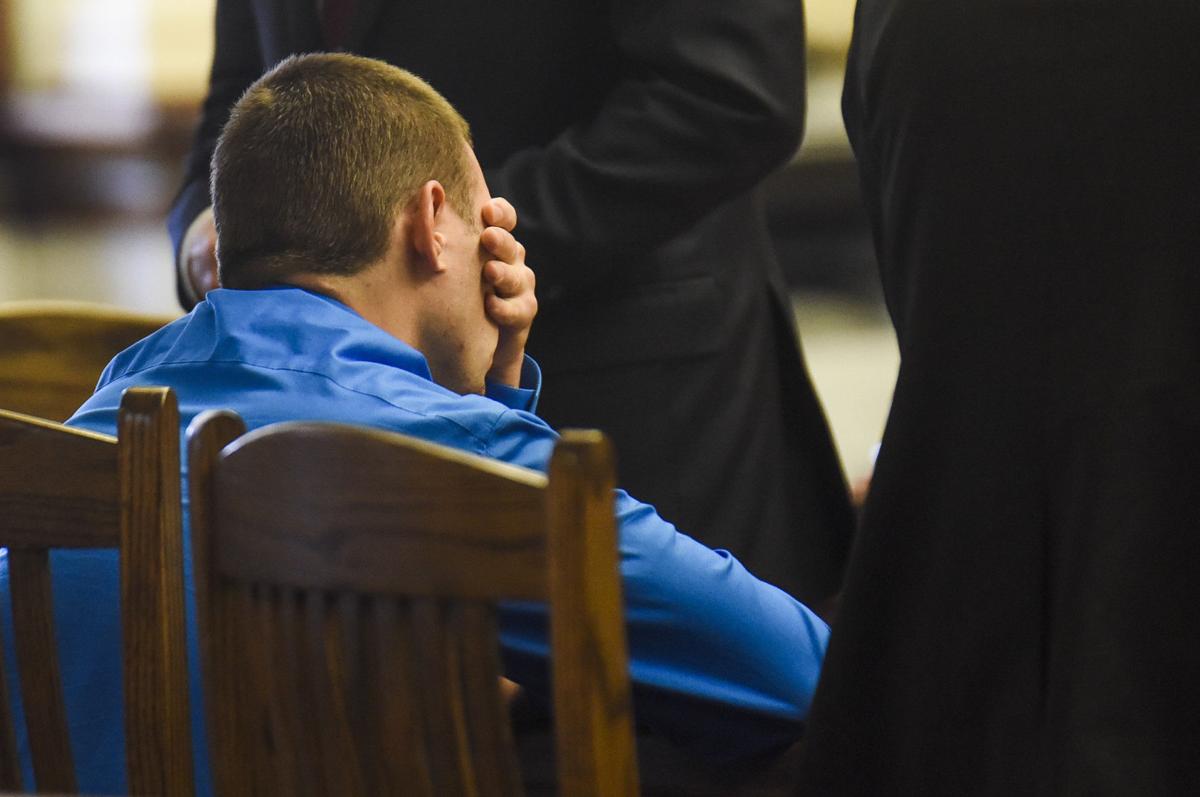 Randy Roden reacts as his verdict is read Monday at Clatsop County Circuit Court in Astoria.

Randy Roden exits the courtroom after his verdict is read Monday at Clatsop County Circuit Court in Astoria. Roden was found guilty of murder by abuse, manslaughter, criminal mistreatment and assault but was acquitted of other murder charges that could have carried the death penalty or life in prison.

Randy Roden reacts as his verdict is read Monday at Clatsop County Circuit Court in Astoria.

A Seaside man accused of torturing and killing his girlfriend’s 2-year-old daughter was found guilty of murder by abuse, manslaughter, criminal mistreatment and assault on Monday, but was acquitted of even more serious charges that could have resulted in the death penalty or life in prison.

Randy Roden, 28, could still spend the next few decades in prison, however.

He faced more than a dozen serious charges, including charges of murder by abuse and felony murder, for the death of Evangelina Wing in December 2014. On Monday, a 12-person jury found him guilty of these last two charges, as well as assault and criminal mistreatment charges tied to his abuse of Evangelina and her two brothers.

Roden was acquitted of charges that alleged he sexually abused Wing. The state had argued that certain injuries to Wing were the result of sexual abuse and that Roden was motivated to kill the child in order to cover up any evidence of this abuse and to ensure she didn’t tell anyone.

Though he was also not convicted on the four counts of aggravated murder, which carried the possibility of the death penalty and included the accusation that he had tortured Wing before her death, he was convicted on lesser charges of first-degree manslaughter.

These charges, coupled with the murder by abuse and felony murder charges, carry significant prison time, potentially up to 35 years — or at least that’s what the state hopes.

“This man should never be around another child ever again,” said Deputy District Attorney Ron Brown, who prosecuted the case for the state.

He said he was pleased with the verdict and plans to ask that Roden serve all his time on the various charges consecutively — one after the other — instead of overlapping the various sentences and serving them at the same time. He is already serving time for violating parole on an earlier coercion conviction.

While Brownhill read the verdict, Roden kept his head down, sometimes running his hands over his forehead and the back of his head. At the beginning of the hearing, he and his lawyers discussed whether or not he should have his handcuffs off. Conor Huseby, Roden’s attorney, said Roden was in a bad emotional state and there were concerns he might hurt himself when the verdict was read.

Brownhill said the decision was up to them, and Sheriff’s Office deputies ultimately removed Roden’s handcuffs.

The jury was united on most of the verdict, the presiding juror who handed the verdict to Brownhill said. They were “hung” on one charge (a second charge of murder by abuse), but Brown and Huseby agreed to accept the verdict as a whole.

The jury had deliberated for close to two days after sitting through hours of testimony and particularly brutal evidence which included a blood-stained door and graphic photos of Evangelina and her extensive injuries. These injures included two black eyes, a broken arm, hemorrhaging around her head, bruises and other marks. Both her mother, Dorothy Wing, and Roden were implicated in her death, with Dorothy sentenced to over 15 years in prison for manslaughter and criminal mistreatment.

Later, a juror told the newspaper the verdict was a “hard-fought decision.”

Multiple times during the final days of the trial and after the reading of the verdict, Brownhill thanked the jury for their service in what she and Brown both called a very difficult case.

Back in his office after the verdict was read, Brown said he felt for the jury. He and other lawyers have a hard time with cases like this, he said, but the nature of their work demands they routinely deal with the sort of things most of the jurors wouldn’t necessarily encounter in their day-to-day life. Every day during Roden’s trial, jurors had to look at the pictures in evidence and hear testimony related to the brutal death of a young child.

Before dismissing the jury, Brownhill said court staff would look into finding counselors for any juror who needed to talk through the experience.

Clyburn: 'Maybe it is' time for remote House voting