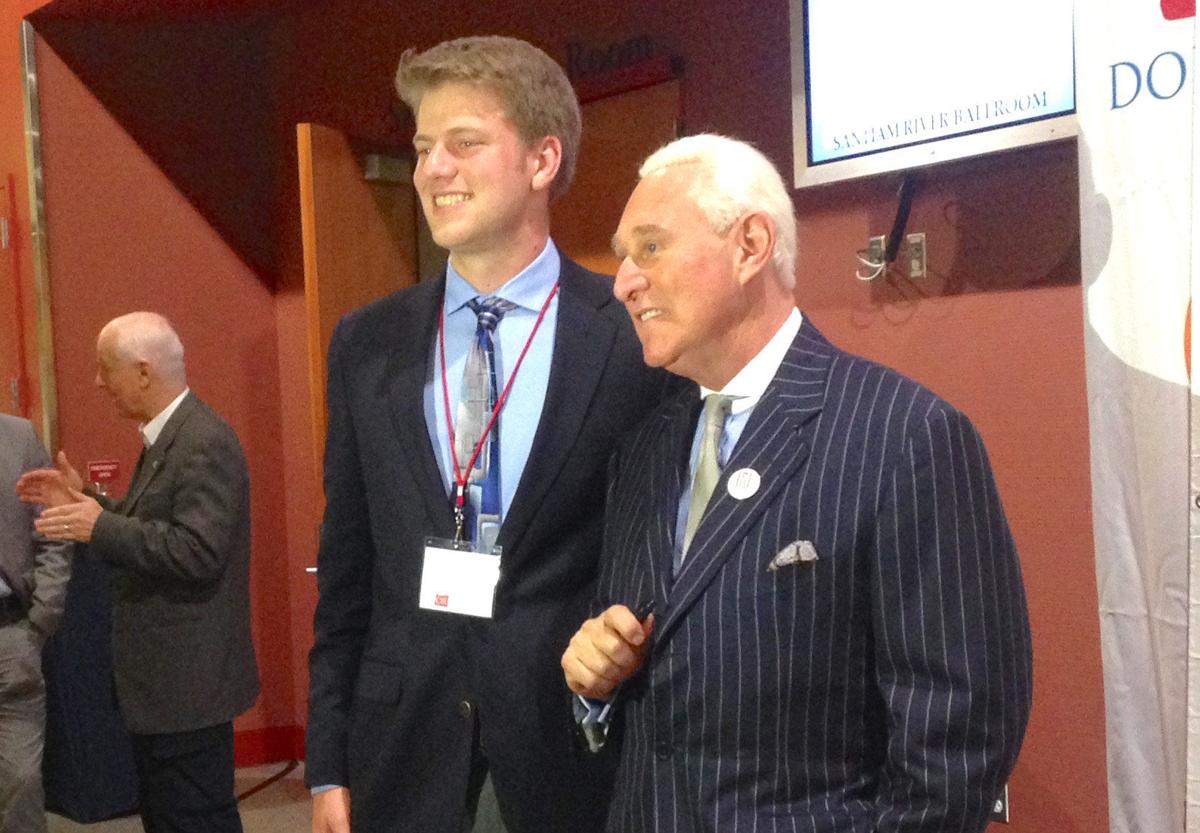 Former Trump campaign adviser and self-styled “provocateur” Roger Stone was the headline speaker at Saturday's Dorchester Conference in Salem. He is shown with a conference attendee. 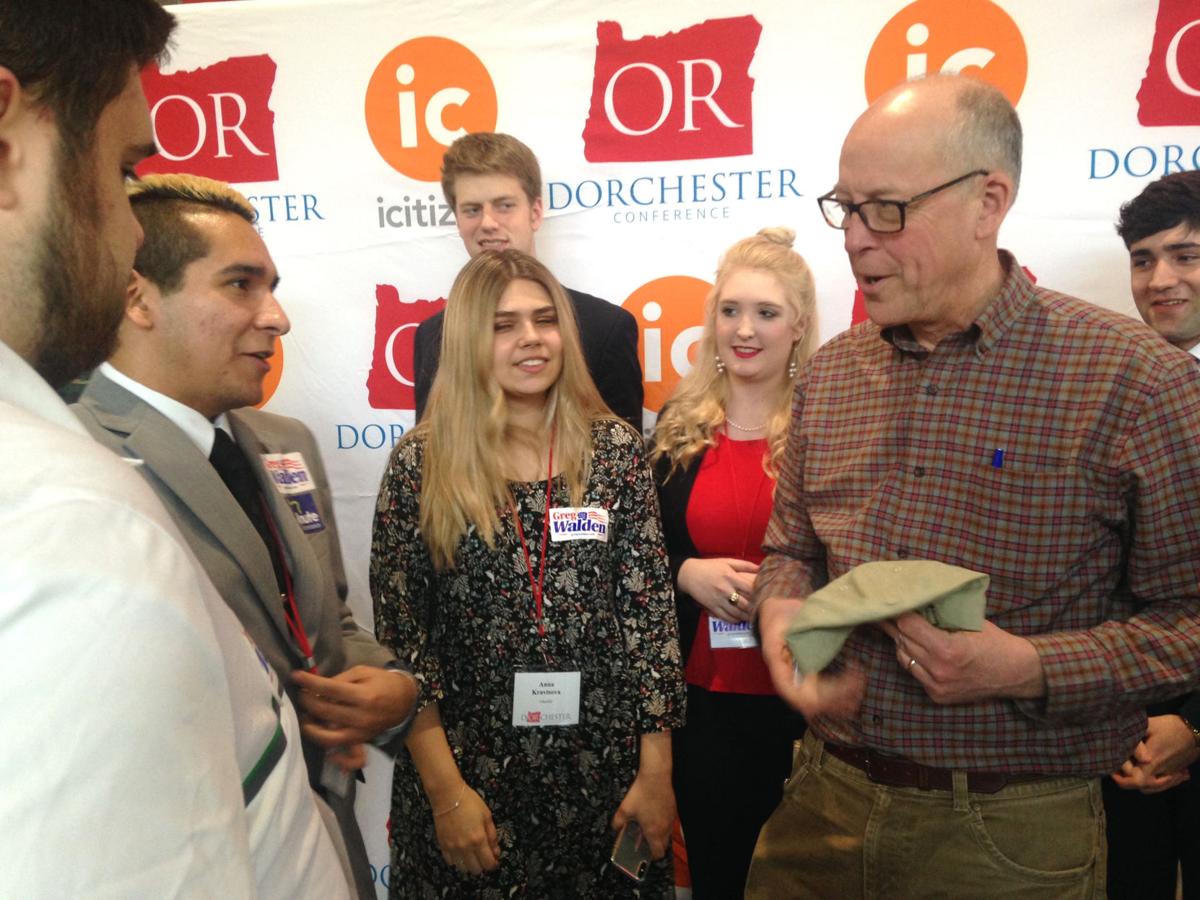 Former Trump campaign adviser and self-styled “provocateur” Roger Stone was the headline speaker at Saturday's Dorchester Conference in Salem. He is shown with a conference attendee.

SALEM — Republican gubernatorial candidate Jeff Smith claims he’s got a winning strategy, one that he’s willing to share with his competitors: Don’t talk about Trump.

“I am working hard to convince them that the issue is not Donald Trump,” Smith said, standing in front of his booth at the 54th annual Dorchester Conference, the annual gathering of Oregon Republicans, in Salem on Saturday. “The issue is winning.”

Although Smith is lesser-known among the broad bench of Republicans seeking the GOP nomination for governor, he’s confident enough that he says he bet the campaign manager for fellow candidate Sam Carpenter — whose slogan is “Make Oregon Great Again” — $100 that he beats Carpenter in the primary.

(Clarification: Following the posting of this story, Jeff Smith and David Gulliver, manager of the Sam Carpenter campaign, contacted the Capital Bureau to clarify that they did not bet on the outcome of the Republican primary. Instead, they say, Smith agreed to donate $100 to Carpenter’s campaign if Carpenter wins the GOP primary, and Gulliver agreed to donate $100 to Smith’s campaign if he wins the primary. It is illegal under Oregon law for a candidate to bet on the outcome of a race, or for any person to bet to influence the result of an election.)

Smith’s is one of a spectrum of opinions about the role of partisanship and the president at the conference, about eight months ahead of the 2018 election, when state legislative races, congressional seats and the governor’s seat will be up for grabs.

Meanwhile, the top Republican in statewide office urged attendees to identify as Oregonians before they identified as Republicans.

Oregon Secretary of State Dennis Richardson told conference attendees in a speech Saturday morning that their identity as Oregonians should come before their identity as Republicans if they wanted their party to win.

Richardson speaks from experience: In 2016, Richardson was the first Republican to win statewide office since 2002, besting Democrat Brad Avakian, the state’s labor commissioner.

“I would not be here unless I got Democratic votes, Green Party votes, Independent party of Oregon votes, Working Family Party votes and votes from non-affiliated Oregonians,” Richardson said. “And why? Because they wanted to elect somebody who would keep his promise to do that which was best for our state. I said when I was elected you wouldn’t be able to tell if there was an ‘R’ or a ‘D’ behind my name, and I hope that you can see that I’ve tried to live up to that.”

Smith, the gubernatorial candidate, also argues that Republicans can win statewide elections by homing on issues that voters in Portland care about, such as health care, education and homelessness.

State Rep. Knute Buehler, R-Bend, who is also jostling for the governor’s mansion, also criticized focusing too much on the White House: He claimed in a speech that while he was solving local problems in the Legislature, Democratic Gov. Kate Brown was “fixated on divisive national politics.”

The Saturday-night headliner was former Trump campaign adviser and self-styled “provocateur” Roger Stone, who gave a speech touting what he believes to be the accomplishments of the president and condemning Democrats.

He is a controversial figure who remains in the national limelight for his ties to Trump.

A former adviser to the campaign, which he parted ways with in August of 2015, Stone has also lobbied on Trump’s behalf on Capitol Hill and says he urged the New York real estate tycoon to run for president first in 1988. Stone got his start in national politics working on Richard Nixon’s Committee To Re-Elect The President (CREEP).

Stone claimed the president brought African-American unemployment to the lowest level on record, said the president is committed to free trade, and celebrated the contributions of alternative right-wing media outlets and social media to Trump’s campaign.

“The rise of a vibrant, robust alternative media, the rise of social media, Twitter, Facebook and so on, is what allowed for the election of an outsider candidate who the mainstream media sought to destroy,” Stone said.

Stone also warned of what he described as a “tech left” that he believes seeks to censor right-wing perspectives on social media platforms.

The Atlantic reported last week that Stone had corresponded directly with radical-transparency organization WikiLeaks, which is suspected to have ties to Russia, before the 2016 election. The magazine reported Stone had told the committee under oath he’d corresponded with Wikileaks through an “intermediary.”

Stone, who on Saturday dismissed what he called “the Russian collusion delusion,” told the magazine he provided the full exchange to the House Intelligence Committee, which is investigating whether the Trump campaign coordinated with Russia to undermine Trump’s Democratic opponent, Hillary Clinton.

“What a world you people created on Nov. 8, 2016,” Jackson said, referring to the day Trump was elected president, to applause. “I’ll never forget the look on those sissies’ faces.”

He disparaged feminists, prioritized the rights of American citizens first and “human beings second,” and criticized the study of the humanities and social justice in the nation’s colleges.

“I’m done with feminists,” he said.

The chairwoman of the Democratic Party of Oregon, Jeanne Atkins, said in a statement earlier this week that the choice of speakers for the conference was “appalling.”

“Republicans are increasingly out of touch with voters and their promotion of speakers who are known for hate speech and public deceit is frightening,” Atkins said.

Greg Astley, president of the conference, defended the choice of speakers such Jackson and Stone and said that the Dorchester Conference was a “big tent.”

The value of the conference, he said, was that Oregonians from across the state could interact face-to-face with prominent figures, recalling how, attending the conference at 14, he met former Gov. Vic Atiyeh.

If attendees disagreed with a speaker’s views, they could go talk to them directly or ask questions, Astley said.

“If we shut down all that kind of conversation, I don’t think we’ll be any better than the progressive far left,” Astley said.

From Trump to Biden: How transfer of nuclear codes will work

This is how Biden says he'd fix the health care system