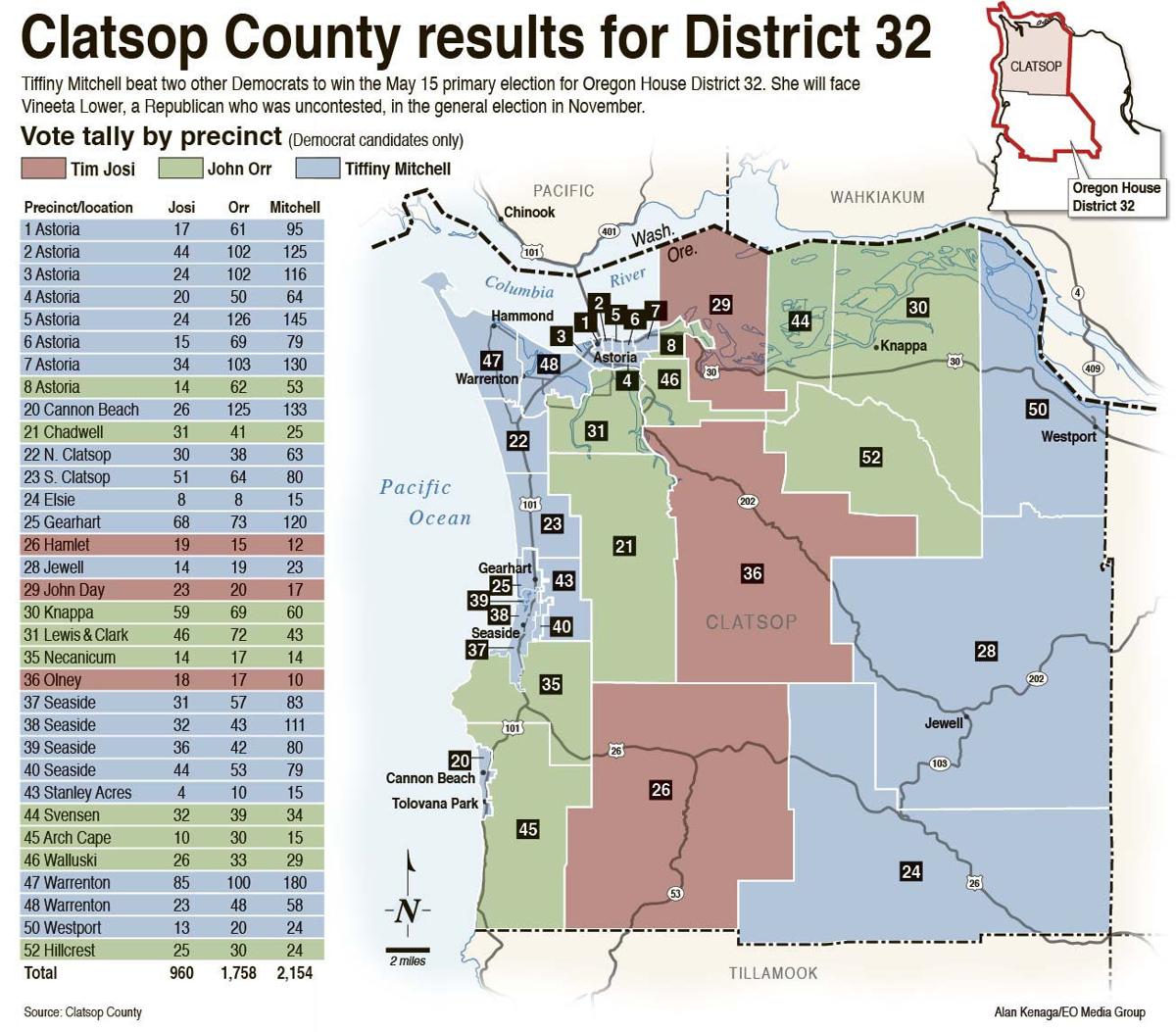 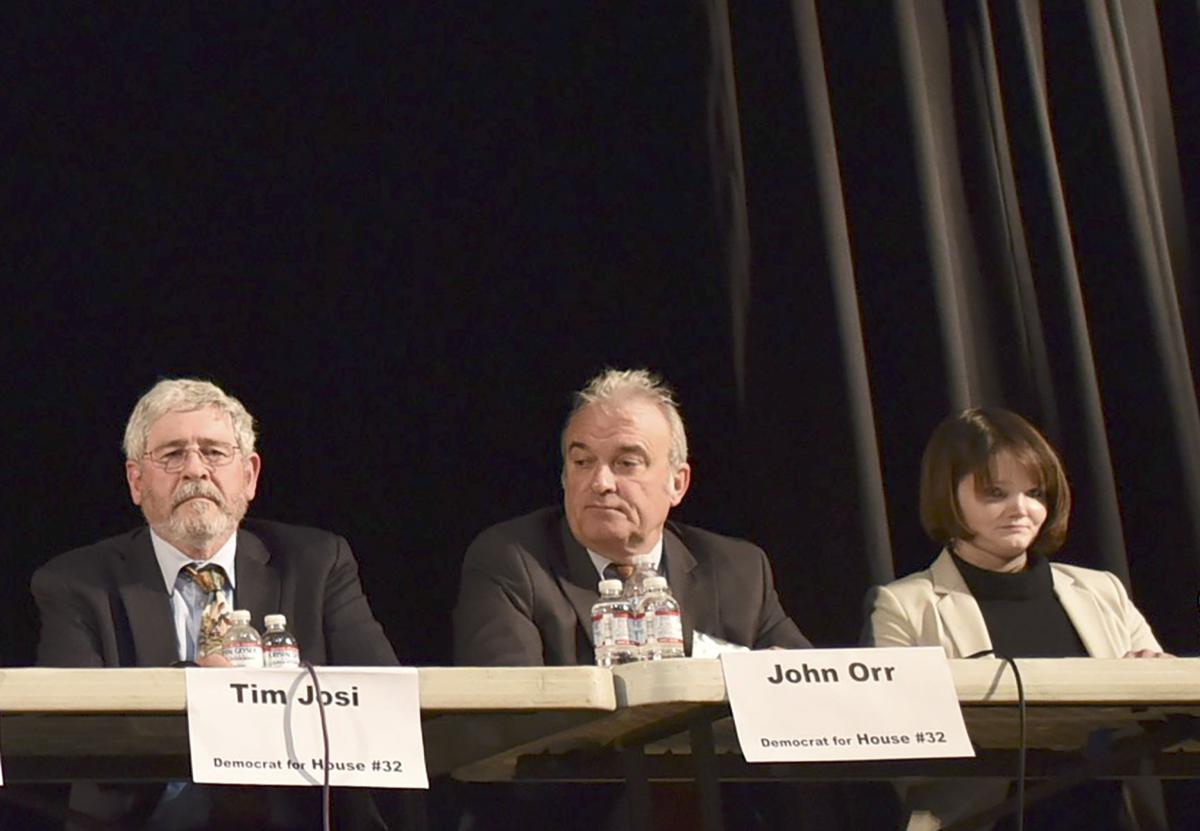 Tim Josi, left, John Orr and Tiffiny Mitchell wait for a campaign forum to start in Astoria in April.

Tim Josi, left, John Orr and Tiffiny Mitchell wait for a campaign forum to start in Astoria in April.

Oregon Democrats will welcome a new face in Tiffiny Mitchell, a case management coordinator and recent transplant from Utah.

In the May primary for state House District 32, Mitchell defeated Tim Josi, a Tillamook County commissioner and former state representative, and John Orr, an attorney and Municipal Court judge in Gearhart. In her first run for elected office, she is the heir apparent to state Rep. Deborah Boone, D-Cannon Beach.

Mitchell’s victory, in which she gathered 42 percent of the vote, is viewed as an upset and a win for progressives against moderates like Boone, who endorsed Josi. While some see the primary as evidence of a shift to the left during Boone’s 14-year tenure, others are more hesitant.

“I don’t think you can tell from one race,” said Steve Demarest, president of Service Employees International Union Local 503, who helped promote Mitchell’s campaign. “There’s so many factors that could play into this.”

Mitchell won 21 of Clatsop County’s 33 precincts. She said she spent the vast majority of her time in Clatsop County because it represents the most substantial portion of the district.

Knocking on more than 3,000 doors, Mitchell, who lives in Astoria, spent most weekdays in the county. On weekends, she would either take trips to the other counties or rely on some of her 75 volunteers to campaign there.

“Face-to-face interactions was the No. 1 way I was able to pull out a victory here,” Mitchell said. “You’re much more likely to have a heart-to-heart conversation with someone when they’re standing at your door.”

Clatsop County’s five cities were the most fruitful for Mitchell, who carried all but one of those precincts. People involved with Mitchell’s campaign say the door-knocking efforts were particularly effective in the more densely populated areas. Unlike Josi, Mitchell did not buy television advertising.

“That’s where you get the most bang for your buck, walking the streets,” Demarest said.

After trailing Josi in campaign contributions significantly in the first two months before the vote, Mitchell narrowed the gap in the final weeks, raising nearly $100,000 in total.

In late April and early May, cash contributions from the Oregon League of Conservation Voters and two labor unions accounted for nearly half of Mitchell’s war chest.

The two unions — the SEIU and Oregon AFSCME Council 75 — have more than 1,000 members who live or work in House District 32. Fewer than 8,000 people voted in the primary.

Issues such as limiting cuts to the Public Employees Retirement System and reducing child care costs were some of the things union leaders searched for in their endorsements.

“The vast majority of people who live here are workers,” said Mitchell, an SEIU member. “When you have that voice from someone who isn’t that type of person you usually see in politics, I think that resonates with them.”

Aid from environmental interests went beyond financial contributions. Sonny Mehta — Mitchell’s manager for most of the campaign — is a field director for Renew Oregon, a clean energy lobbying coalition. Replacing him for the general election will be Thomas Rogers, a former Renew Oregon intern who volunteered for Mitchell.

Forestry issues became a dividing line in the race. With Josi generally supportive of modern forestry practices, Orr and Mitchell called for changes. Mitchell’s call for an elimination of clearcuts, for example, appealed to environmental groups.

Mitchell supporters also point to demographics as another potential reason behind the win. An increasing appetite for women candidates may have helped propel her, said Debbie Boothe-Schmidt, a campaign volunteer.

“I heard several times, ‘We need someone besides an old white guy in office,’” Boothe-Schmidt said.

With five months before the general election in November, Mitchell will now appeal for votes from those who supported Orr and Josi. Timber interests were some of Josi’s main financial backers. Many of those voters are skeptical of her environmental policies.

“I think, deep down, we all really want the same thing,” she said. “I really do want to keep your jobs, but in a sustainable way.”

With few policy differences of opinion between them, Orr repeatedly stressed campaign finance reform as an issue. He raised just over $16,000 in cash contributions, and no donation topped $1,000. Mitchell said her campaign funds come from people and groups whose views largely align with those of Orr, who said he will endorse Mitchell.

“It’s not Wells Fargo,” she said. “It’s someone who’s possibly taking care of people from home.”

Opposing Mitchell in November will be Vineeta Lower — the only Republican candidate who filed. Brian Halvorsen, an Independent from Tillamook, will also run.

Lower said she will highlight infrastructure improvements and education needs in the campaign. The Seaside educator will begin door-to-door campaigning in the coming months.

“I’m really looking forward to getting out this summer and meeting my neighbors,” she said.

Despite the differences revealed in the Democratic primary, a dramatic shift in messaging and strategy will not be necessary for the general election, Mitchell said. “I am who I am.”

Giroir: We do not have a safe, effective vaccine yet

RBG's principles vs. the coarse political culture of 2020