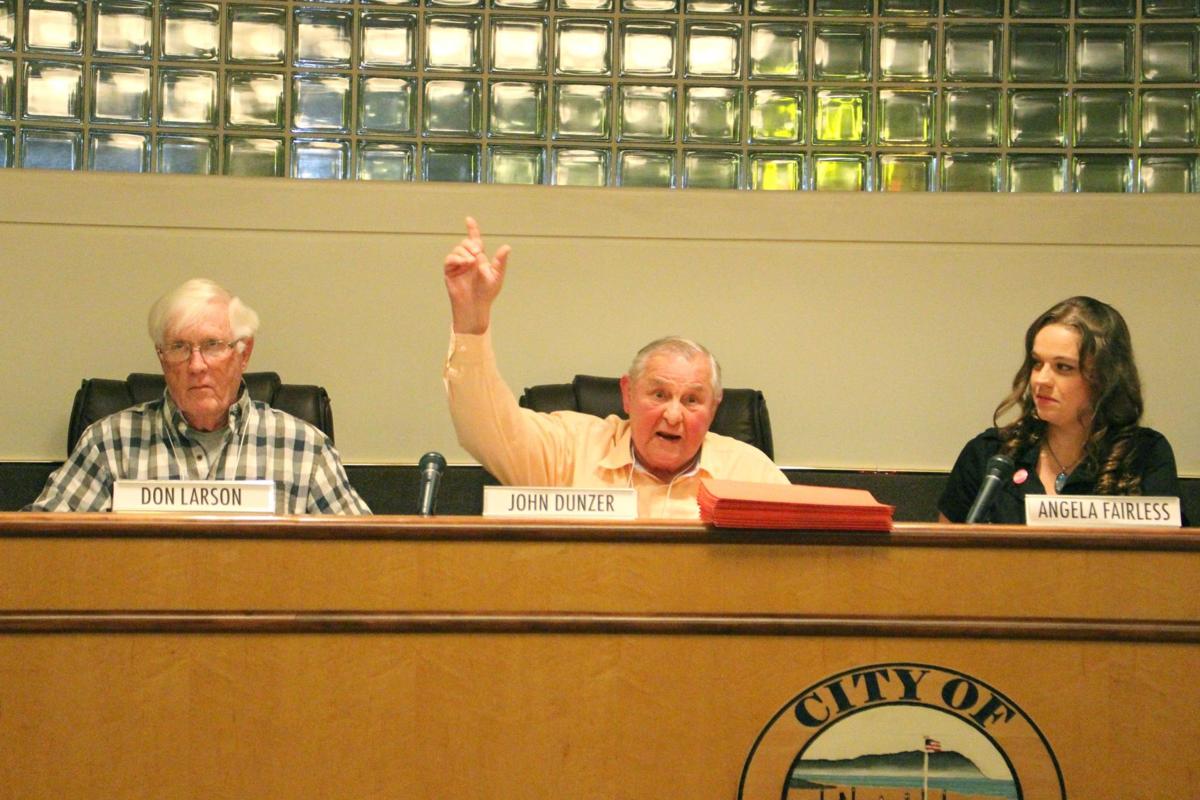 Seaside mayoral candidates from left are incumbent Don Larson, John Dunzer and Angela Fairless as they appeared at a forum Tuesday, Oct. 9. Despite a number of differences, each candidate has expressed a great deal of passion in serving the community. 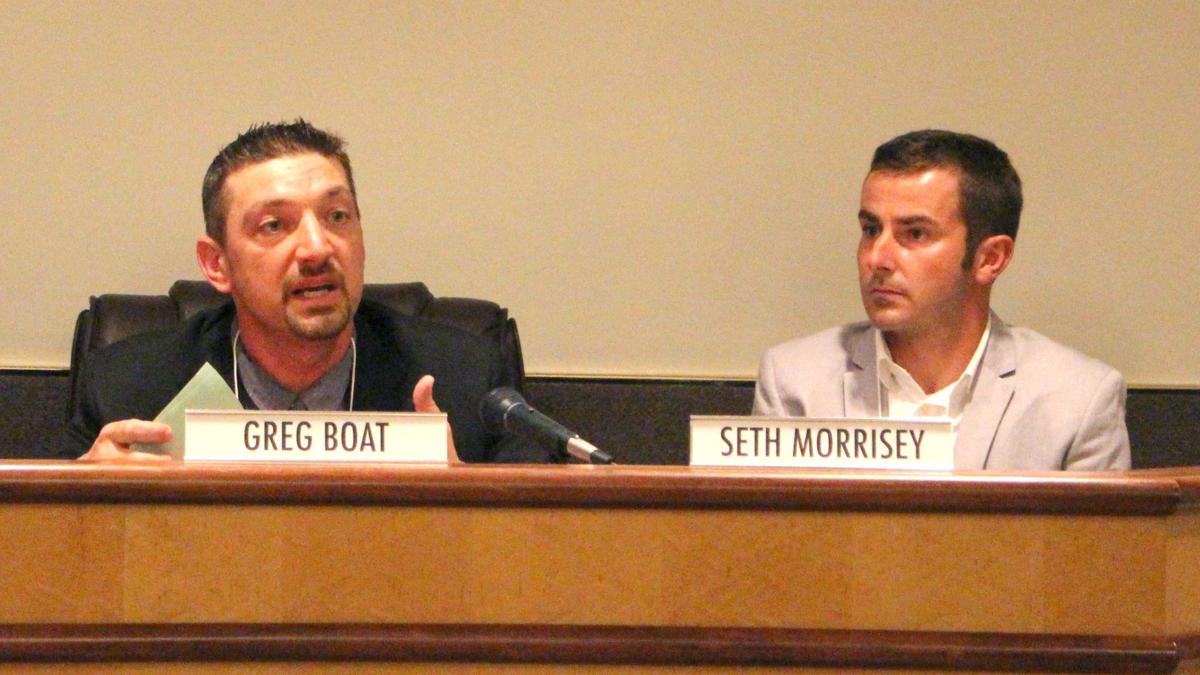 Greg Boat, left, and Seth Morrisey are running for the Ward 4 Precinct 40 position on Seaside City Council. The position, most recently held by former councilor Stubby Lyons, will carry a two-year term. 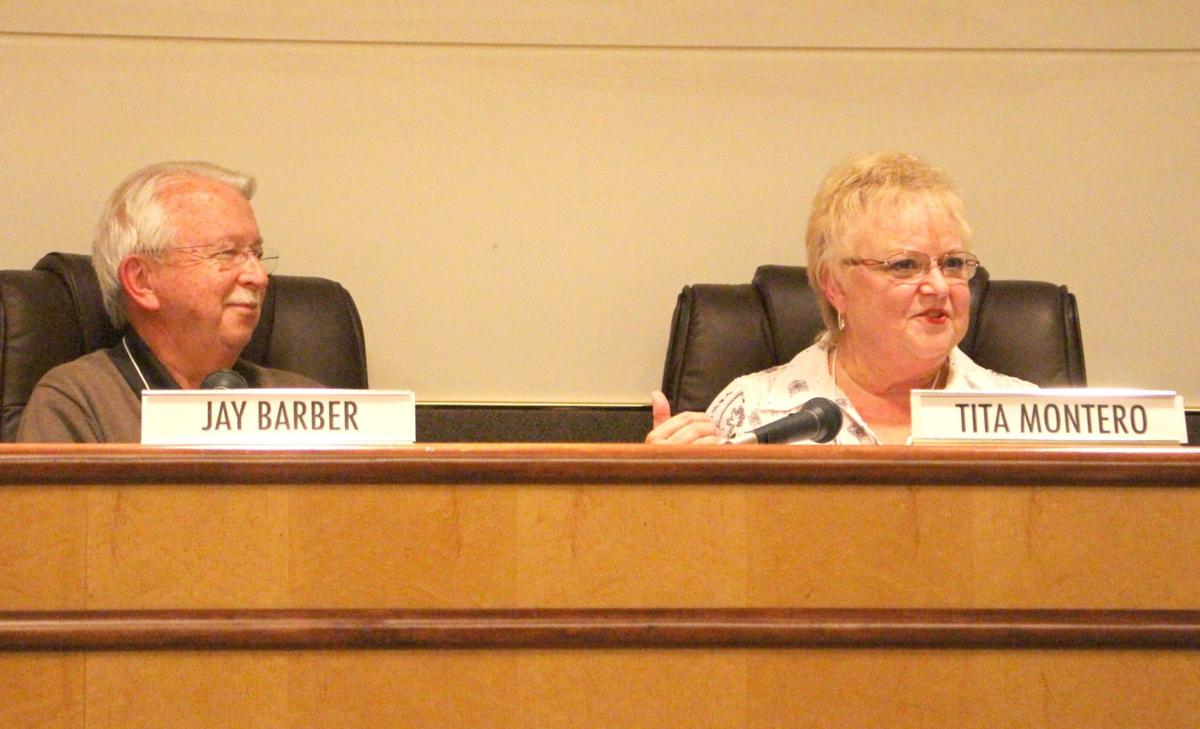 Seaside mayoral candidates from left are incumbent Don Larson, John Dunzer and Angela Fairless as they appeared at a forum Tuesday, Oct. 9. Despite a number of differences, each candidate has expressed a great deal of passion in serving the community.

Greg Boat, left, and Seth Morrisey are running for the Ward 4 Precinct 40 position on Seaside City Council. The position, most recently held by former councilor Stubby Lyons, will carry a two-year term.

Local candidates had the opportunity to present their platforms and answer audience questions regarding economic development, Hood to Coast and emergency preparedness during a forum hosted by the Association of American University Women last week at Seaside City Hall.

After three-minute introductions, the candidates answered questions submitted by the audience.

Each person had one minute to answer. The questions covered a range of topics, including the city’s recent purchase of the former church building on Broadway, problems with city streets and bridges and equality for all Seaside residents. Some questions were for single individuals, and others for groups of candidates.

One of the questions for the Seaside mayoral candidates asked what specifically can be done to make the city thrive.

Fairless, who has been involved in local politics for about 10 years and co-founded the Seaside Skate and Ride Park Committee, said her top priority would be the economy. She believes the Seaside 2034 visioning project reaped many good ideas, and she suggested turning to those ideas, which were derived from the citizens, to help the public not only survive but to flourish, as well.

Dunzer, a longtime resident of Seaside, said he has a whole packet of things that could be done in Seaside, including eight or nine items relating to economic development. He believes the county should more equally distribute funds it receives from the state through the lottery system.

Larson, who has many years of public service under his belt, agreed economic development is an important part of helping the city thrive. He believes Seaside should continue to work closely with organizations, such as Clatsop Economic Development Resources. Already several projects have been accomplished through cooperative efforts and that must continue to be the strategy, he said.

Another question for the mayoral candidates addressed the recent proposed change to the Port of Astoria Commission and asked if the candidates favor the governor appointing members.

Dunzer said he’s actively worked with the Port Commission in the 12 years he’s resided in Seaside. He also has run for Port commissioner three times, unsuccessfully. He believes the commission “has a direct responsibility for doing economic development in the county,” he said.

He does not like that the commissioners are elected at large or that the agency is focused overwhelmingly on Astoria, but he doesn’t believe having the state step in is the right answer.

The other candidates agreed. Larson said Seaside has tried to get help from the Port on several projects to no avail.

He is pleased with the new executive officer but does want to see more change in the Port Commission.

Fairless said there is a lot of talk about the southern portion of the county not having enough pull in the county as a whole, and she believes “in regards to the port, that’s very true.”

“It needs to be focused on, and I think there needs to be some change, but I do not think having the state step in is good,” she said. “Checks and balances are very important, and having people elected by the people is also very important.”

A question for the City Council candidates asked what they think the council can do to make the entrances to the city more attractive.

Boat disagreed, saying the north side of town needs improvement, as well as the south side.

“The gateways to our city, when people drive through, is what makes them decide to stop and spend their money in our community,” said Boat, the owner of Del Sol on Broadway and president of the Seaside Downtown Development Association for a year and a half.

He also would like to see the city construct a large entrance to the downtown core.

Montero, who is seeking her second City Council term, agreed both gateways should be addressed. Annexing the southern property is an important first step, she said, but it doesn’t stop there. Signs could be repainted or made bigger, in addition to other smaller projects to make the areas more beautiful. She cautioned it will be a slow process.

Barber, who has served on City Council for about five years, said a lot of the southern properties that back up to the Necanicum River are on septic systems. Annexing them would connect them to the city’s sewer system.

“I think it’s a very important first step,” he said.

Another question directed toward City Council candidates involved the annual Hood to Coast Relay, and if anything should be changed, considering the event’s impact on the city.

“Hood to Coast is a controversial issue,” Boat said. “I don’t want to go to City Council to try to close events or change what we do here in Seaside. But the amount of money that the organizers of Hood to Coast give the city is way inadequate for the costs that the city puts out to run this event.”

He would like to see the city given more money that can be put back into the community.

Morrisey agreed, adding, “I believe we have a lot of leverage over the organization because there’s not really any other place it can go.” He said he also would like to see more local teams have the opportunity to participate.

Montero said things have improved, in terms of how the organizers compensate the city and try to boost various local organizations and businesses.

“I think we’ve come a long way. We can go further. We’ve got good relationships with the Hood to Coast; they can be better,” she said.

Barber believes it’s a single event that “has tremendous positive impact on the city,” by bringing in thousands of people who come back later as tourists “because of the way they’re welcomed here.”

“I agree we can do more, and we did last year,” he said, referencing the donation made to Providence Seaside Hospital. “They’re responsive and we’re working very closely with them to impact the city more positively and plan better.”

City Council candidates also were asked what are the top issues in their respective wards.

Barber talked about the need for design review for houses and apartments being built in the city, and particularly his ward, which mostly is from Avenue G and south. Most cities on the coast have ordinances to protect and guarantee a certain quality of life in beach towns.

“We desperately need that, and I think that’s one of the main issues facing us,” he said.

Montero said her ward is in the north end of the city and filled with vacation rentals. She would like to see more attention given to maintaining the appropriate use of vacation rentals. They need to be inspected and reviewed by the city to ensure they are safe, she said.

Boat answered that there are a few key issues in his ward. One is the drainage problem on Broadway, which is “an environmental nightmare,” he said. He also believes the city needs more low-income housing in the city, and particularly Ward 4.

Morrisey said his main concern is that the urban growth boundary is expanding.

“As we put in new subdivisions we need to think of what that means for the (Seaside) Public Works Department that needs to maintain these subdivisions,” he said, adding the department must receive more funds or resources if the city is going to expand.

The last day to register to vote in time for the November general election is Oct. 14. Ballots for the election will be mailed out between Oct. 15 through 17. On Election Day, the Clatsop County Elections Office will be open from 7 a.m. to 8 p.m. Ballots must be delivered to an official drop site or the County Clerk’s Office, 820 Exchange Street, Astoria, no later than 8 p.m.

For more information, visit the county website at www.co.clatsop.or.us/page/298?deptid=2