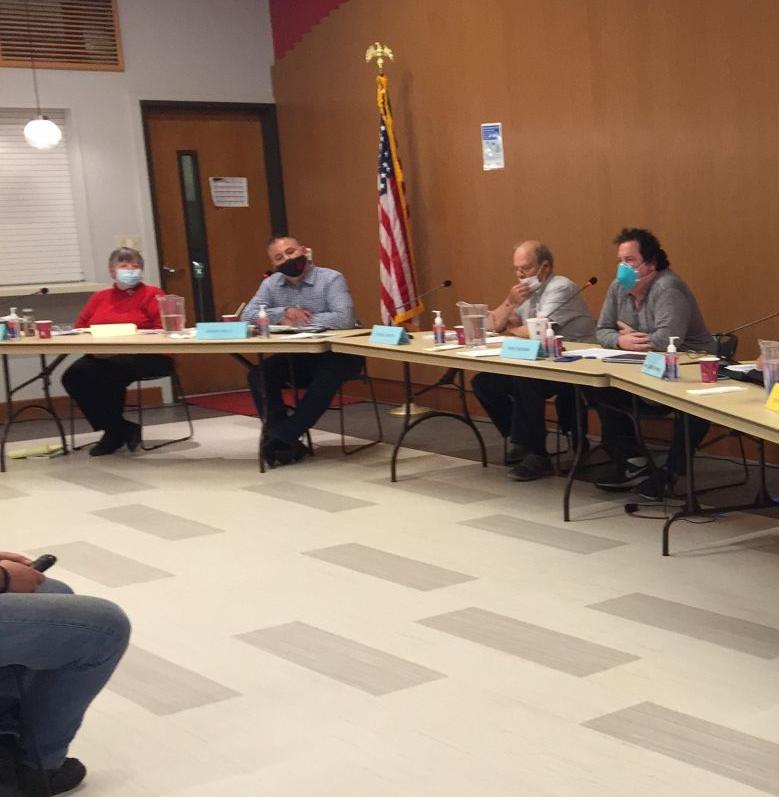 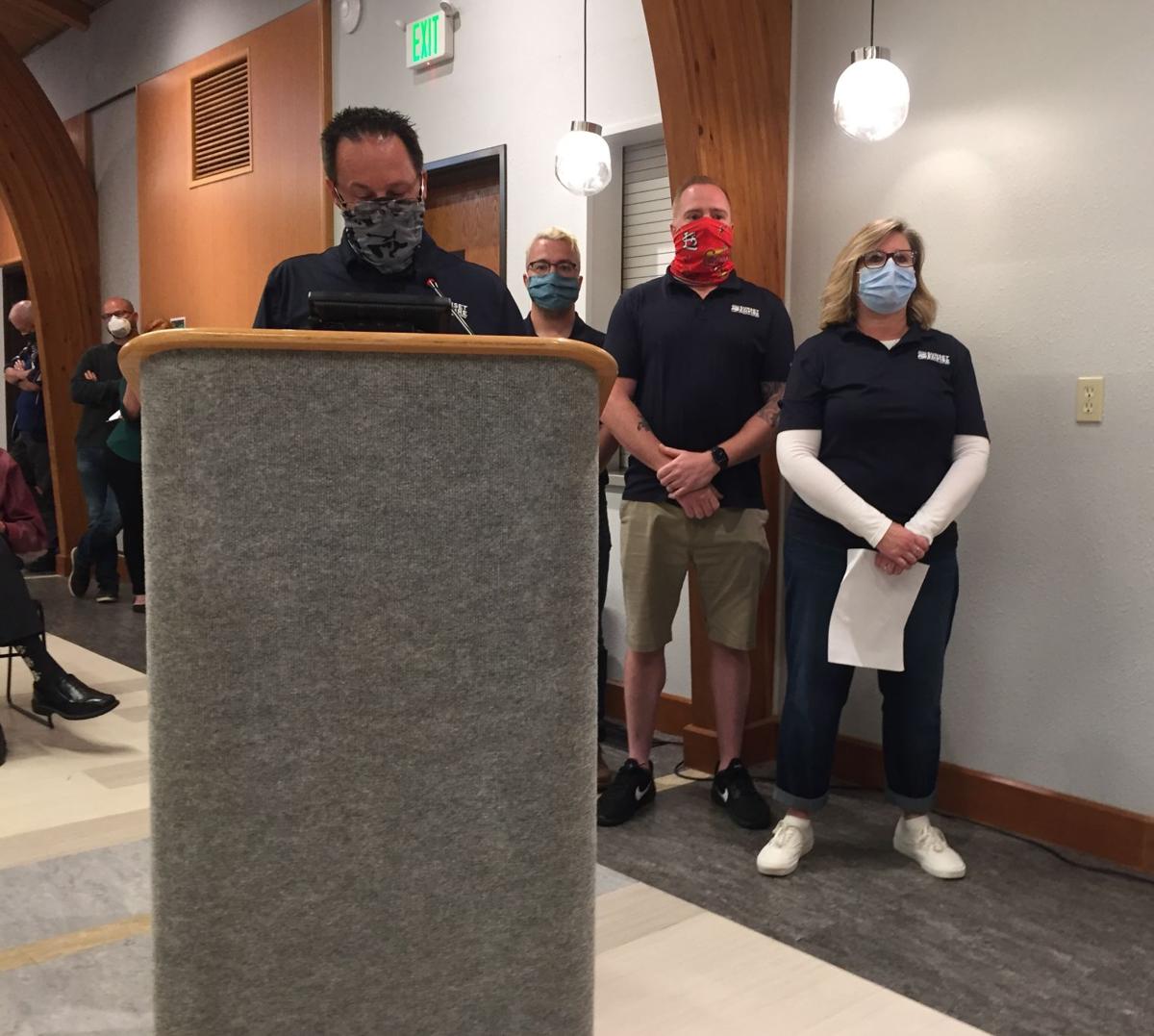 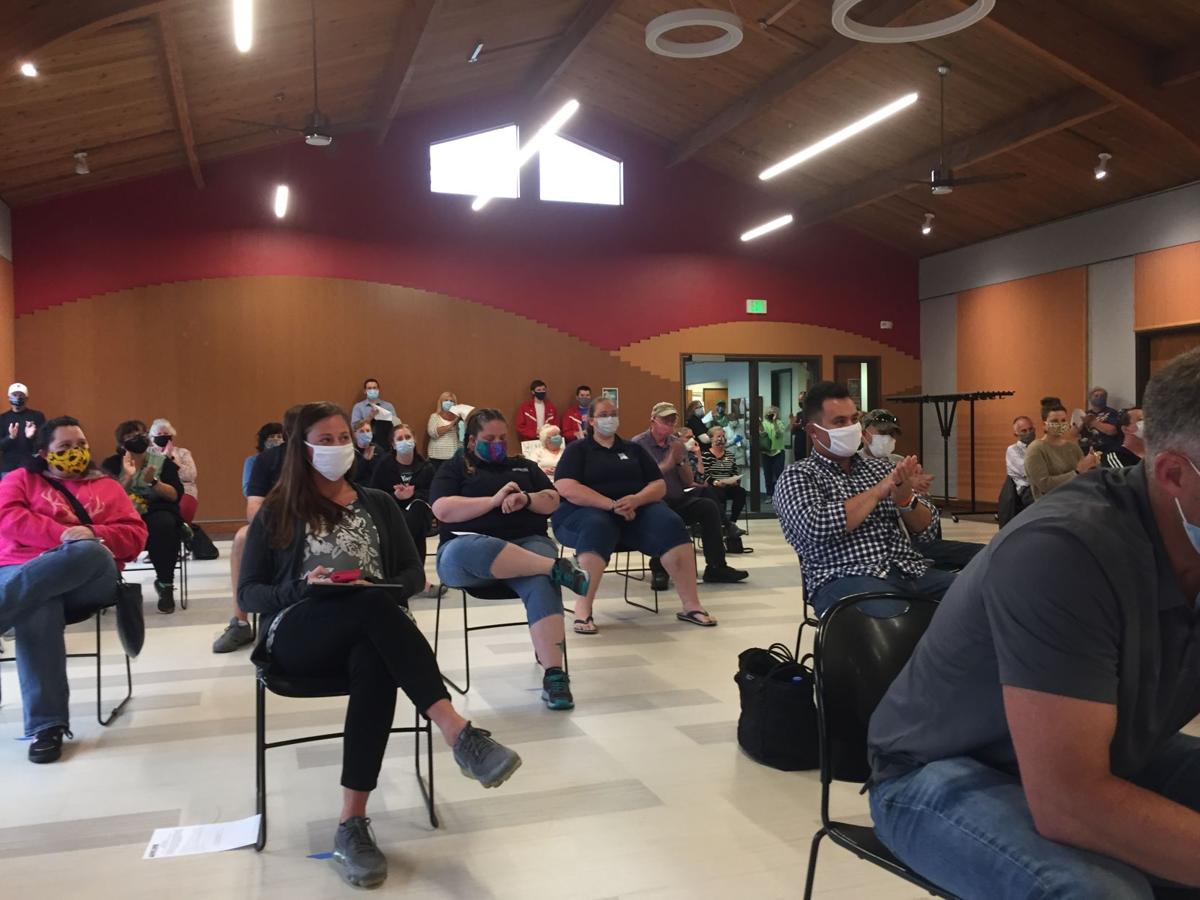 A crowd at the Bob Chisholm Community Center Tuesday night, many in support of Skyler Archibald. 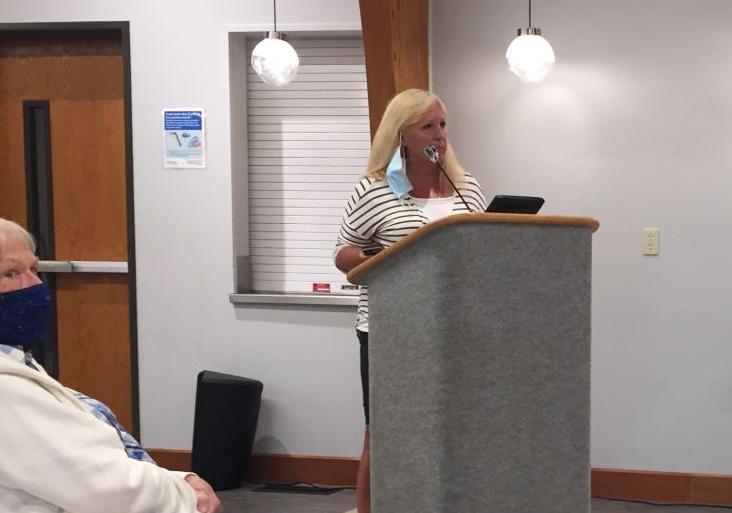 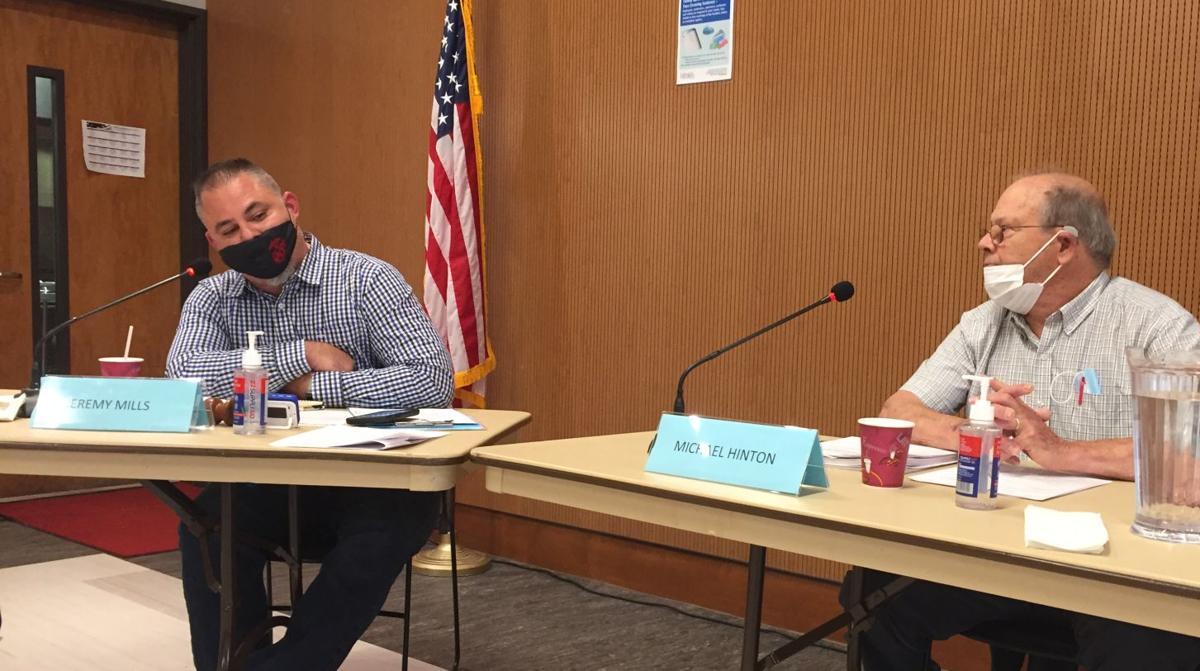 A crowd at the Bob Chisholm Community Center Tuesday night, many in support of Skyler Archibald.

A special meeting Tuesday to discuss whether Skyler Archibald had authority as executive director to sign an agreement on behalf of the Sunset Empire Park and Recreation District for a batting facility at Broadway Field drew a large audience and a call from employees and others for board president Jeremy Mills and board member John Chapman to resign.

The night at the Bob Chisholm Community Center concluded with a bombshell charge that Mills had delivered an inappropriate financial offer to Archibald in December. Archibald alleged a potential violation of state law after Mills allegedly sought his services at the insurance agency Mills operates in Seaside.

Archibald signed an agreement with the city and Seaside Kids on March 24, specifying that management of the batting facility would be split between the park district and Seaside Kids. The cost to the district would be about $2,500 per year.

Mills said at the June 16 park district meeting he and the board never approved the agreement.

At that meeting, Archibald acknowledged that he did “a very bad job of communicating the agreement.” He took responsibility for not sharing the information with the board.

Archibald asked that the meeting be held before the public.

Archibald said Tuesday that he “could have communicated better,” but defended his actions in signing the agreement.

He said his intention was not to mislead the board and he did not feel the agreement was the most pertinent component of the project.

He said parks foundation board members supported his actions, as did many residents and partners in the project.

“Had it not been for the district, the project would not have proceeded,” Archibald said. “My inclination is that this meeting was not called to review the indoor hitting facility IGA, and what happened in the days and months before its signing, but instead, to cause me uncertainty about my job performance and my failure to change the direction of the district to fit the position of some of the currently elected board of directors.”

Chapman said Archibald showed “a lack of transparency” and misrepresented terms of the batting cage agreement. He said he would vote to investigate the action further and asked board members to join him.

Mills said the process had gone nine months without Archibald informing the board about the batting cage facility, which could bring liability and unforeseen costs to the district.

“I was voted in to be fiscally responsible for the money entrusted to us,” Mills said. “This is not a light responsibility. Our only intent is to do the best for (the district) that we can. This is an exploration of how our executive director moved forward on a project and never informed us. This is about what you voted us in for, to be responsible.”

“We’re talking about an incident that occurred that we thought was appropriate to look into,” Chapman added. “End of story.”

The management team and staff filed a formal grievance regarding “behaviors unbecoming of a board member” involving Mills and Chapman, including offensive remarks and sexual innuendo.

Gooch and staff mentioned incidents from last December to late June of alleged inappropriate behavior and sexual innuendo involving Mills and Chapman, both inside district facilities and out.

“These incidents besmirch the district’s name in the community and undermine staffs’ ability to conduct their work effectively,” district management and staff wrote in a letter released at the meeting.

“The amount of bullying that has been put on Skyler is why we collectively as a staff said enough is enough as a staff,” Shelly Owen, the youth program director, said.

Gooch said employees demand disciplinary action against Archibald be dropped and called for the immediate resignation of Mills and Chapman.

“I have signed so many IGAs on my own that I can’t count,” Roley said. “It makes my heart ache knowing what this organization has the potential to do. If you don’t get on the same page about what your mission is and what your vision is and what you do in the best interest is for people of our community, they’re losing out and you’re missing out.”

Roberts said administrators frequently sign agreements without explicit board approval. “If every time I brought an intergovernmental agreement before the board, my board would think I’m an incompetent leader,” he said.

Hazen said boards are required to make sure clear policies are in place. He said he brings larger agreements before his board, and signs the smaller ones himself.

“Skyler has apologized numeous times, but some of this board’s members seem to be hell-bent on dragging Skyler through the mud for minor issues,” Hazen said.

Seaside’s Shannon Symonds called Archibald “a man of integrity,” and said signing the agreement was part of his job. “The only mistake Skyler made was apologizing to you,” she said. “Skyler has integrity and you have called his integrity in question.”

Symonds asked for a recall election of Mills and Chapman. “You’ve asked him to have all your ducks in a row. You’re not leading. You’re not supporting. You’re not tracking. This is micromanagement. And he doesn’t need it.”

At the meeting, Archibald submitted a letter reporting a potential violation of state law after Mills allegedly sought his services at the insurance agency Mills operates in Seaside.

Archibald said the offer came in December, a day after the parks district board decided after a four-month review process that a merit increase would not be awarded to Archibald.

The next day Mills arranged a meeting at his South Holladay Drive office, Archibald said.

“Then Jeremy took his State Farm checkbook and placed it on the desk between where he and I were sitting. ... Jeremy said that he knew I was disappointed that my review didn’t turn out differently and he was hoping to ‘make it right.’ He took out a pen and seemed as if he was about to fill out a check.”

When Archibald expressed his confusion, “Jeremy explained that he wanted to hire me as a consultant for his State Farm insurance business.”

Despite Archibald’s lack of knowledge of the insurance business, Mills said “not to worry” as the business wouldn’t have any connection with Archibald’s employment with the district.

Mills suggested Archibald could use connections to his church community to help build business, Archibald said.

Archibald said he “wasn’t comfortable” with the arrangement and left the office.

On Dec. 19, Archibald reported the incident to the Special Districts Association of Oregon legal counsel, and shared the encounter with several other colleagues.

“Although Jeremy told me that the consultant position wouldn’t have any connection to my district employment, it was impossible to see the two as unrelated,” Archibald said.

Since Mills, as board president, is the board member entrusted to work most closely with the executive director, Archibald said, “should I accept, I would be doing something unethical, maybe even illegal. But should I refuse, as I did, I risked compromising our relationship.”

Archibald said his relationship with Mills “has deteriorated” since he refused the offer, and has had a “great impact on his attitude toward me in my role of executive director.”

Archibald said he is afraid that by making the report, he will be subject to termination. “I sincerely wish that I could have avoided disclosing this situation to the community,” he said. “However, after a great deal of thought and deliberation, I’ve decided that it is my duty to disclose this experience to the board and the district.”

Mills said he “recognized the situation,” and made the offer because he felt “heartbroken at Christmas that he (Archibald) did not receive a bonus.”

Over the course of the two-and-a-half hour meeting, three of the five board members split from Mills and Chapman.

While acknowledging the need for “transparency and clarity,” board member Su Coddington called the quality of the executive director “exceptional.”

Coddington described “division, a lack of decorum and frustration” among the park district board. “I support Skyler and I am very concerned about this board. ... Mr. Mills, I question your position.”

Board member Katharine Parker suggested an apology from Archibald was offered and should be accepted.

The longest-serving board member, vice chairman Michael Hinton, said he believed Archibald had the best interests of the district at heart.

“I thought the issue of the IGA was an important issue,” Hinton said to Mills. “But you should have been bringing the issue before the board before the (June 16) meeting, before you and Mr. Chapman worked together to attack Mr. Skyler Archibald.”

Hinton said Mills and Chapman had “betrayed the confidence of the board.”

He said the board will take up the grievances of district employees. “I cannot say I have a lot of reliance on two of our board members,” he said.

After the meeting, Gooch said he had hoped for the resignation of Mills and Chapman.

With the additional information provided by Archibald, this is “conduct unbecoming a board member,” Gooch said.

“We hoped that all the evidence was presented they’d make the right choice to resign. Unfortunately, they did not, so we’ll have to go to the next step, to call a mediator and begin the process of mediation,” Gooch said.

Labor action could take place, Gooch added. “We want to do what’s best for the district. In 17 years, I have never seen such egregious behavior conducted by board members Chapman and Mills. We’re thinking to the next steps to see if we can find resolution there.”

Gooch said he will seek a date for a third-party mediation. “If further action is required it will take place after mediation if our grievance isn’t satisfied.”