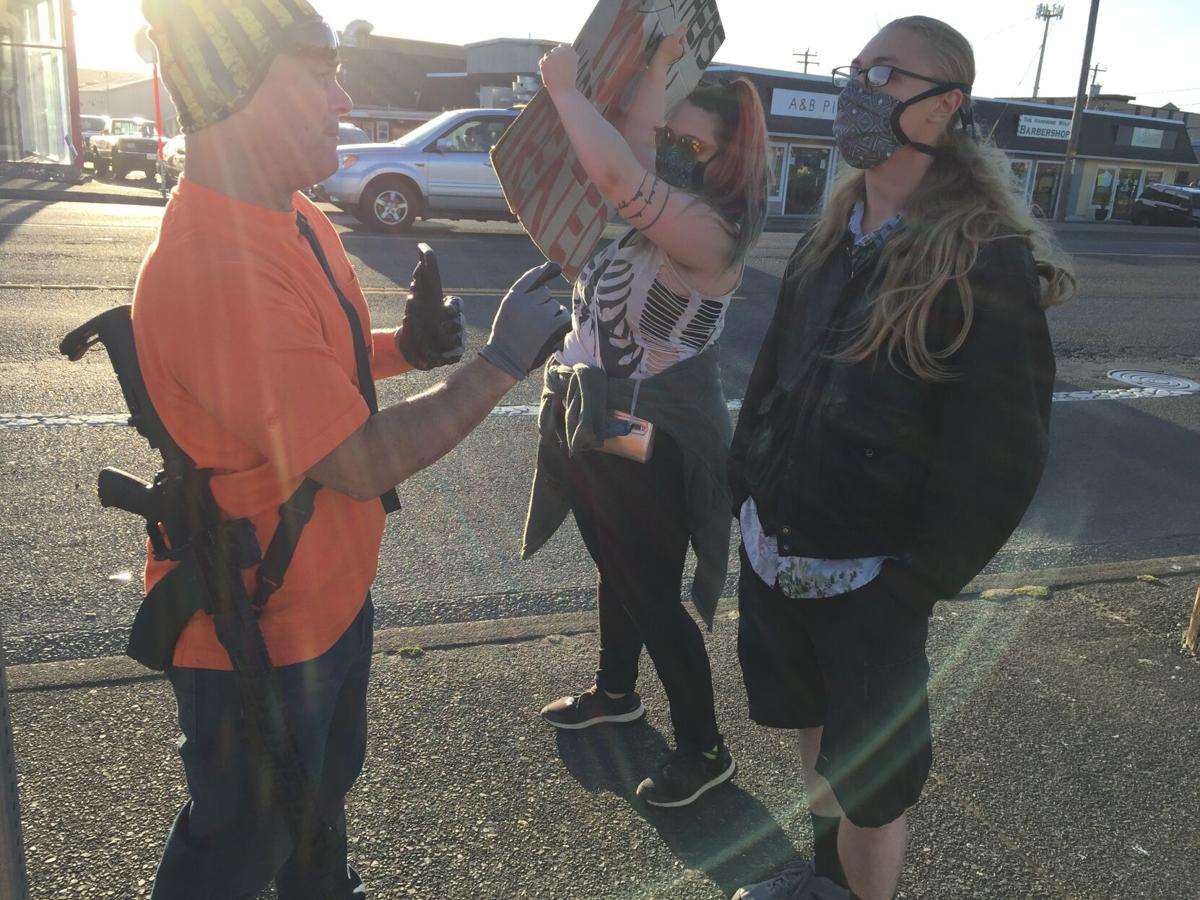 Encounter of opposing groups on U.S. Highway 101 in Seaside on Aug. 8. 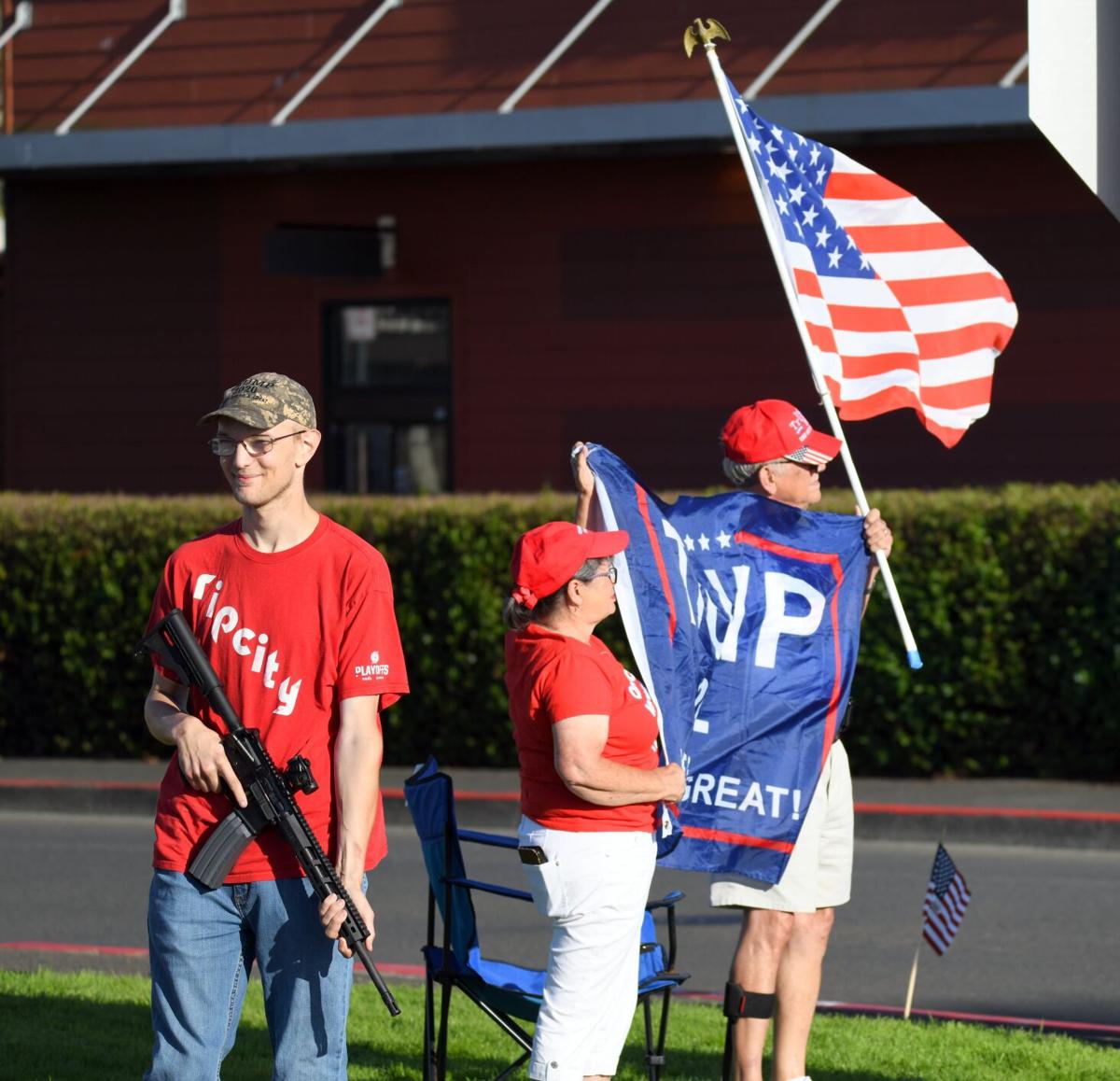 Skylor Jernigan, left, in Seaside on Aug. 12. In a Portland protest the next week, Jernigan was charged with two counts of unlawful use of a weapon, menacing, reckless endangerment, and discharging a firearm. 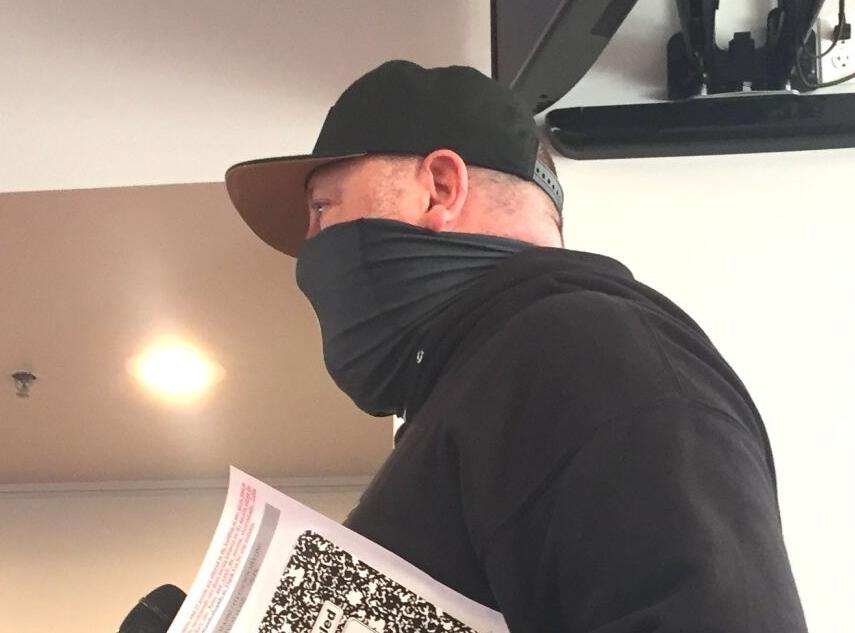 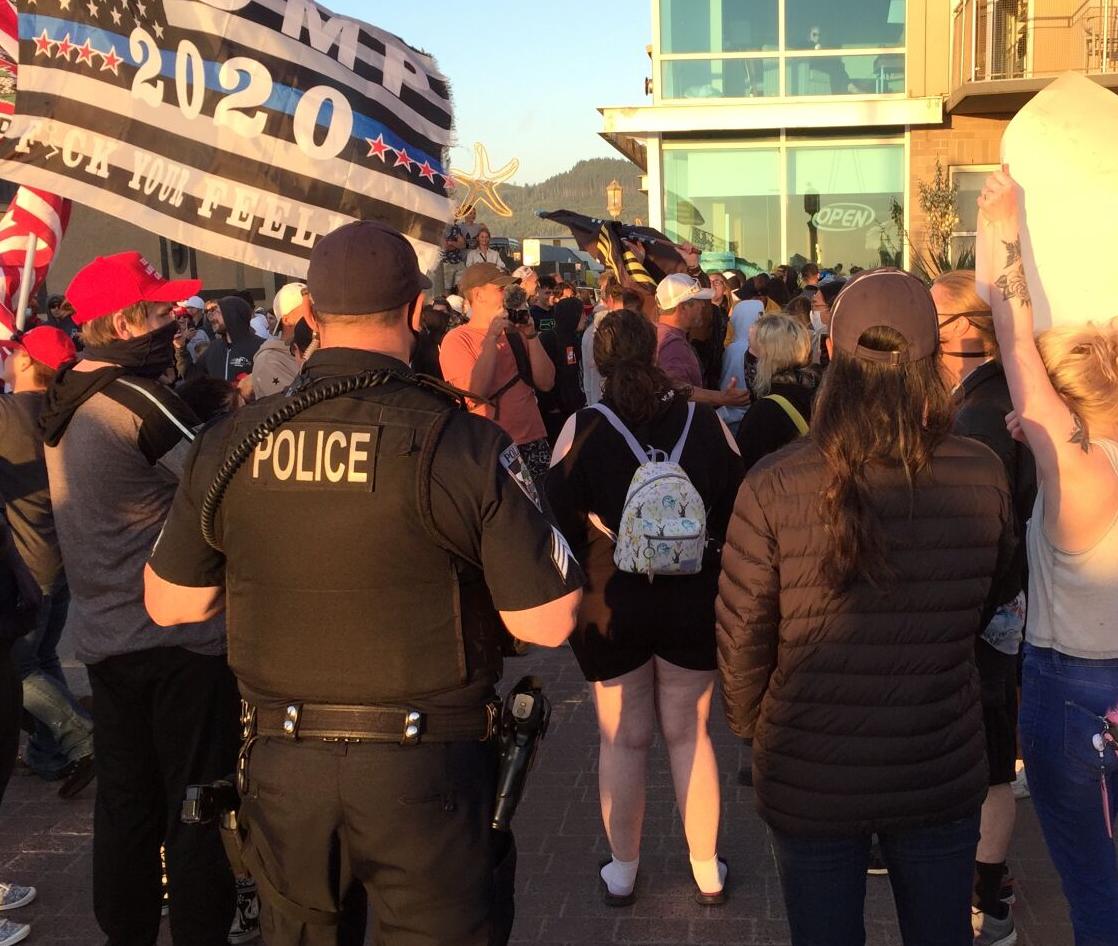 A Seaside policeman keeps a watchful eye at the Aug. 8 rally. 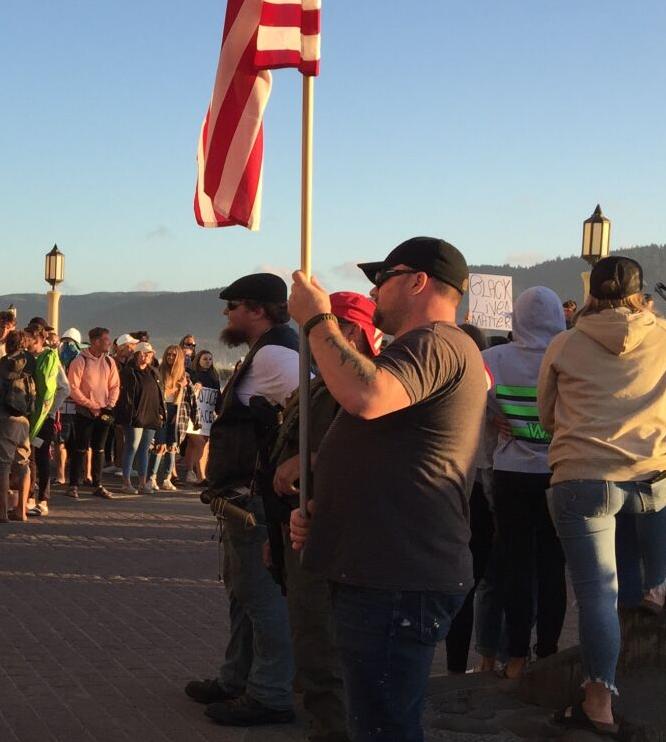 Encounter of opposing groups on U.S. Highway 101 in Seaside on Aug. 8.

Skylor Jernigan, left, in Seaside on Aug. 12. In a Portland protest the next week, Jernigan was charged with two counts of unlawful use of a weapon, menacing, reckless endangerment, and discharging a firearm.

A Seaside policeman keeps a watchful eye at the Aug. 8 rally.

On Aug. 8, supporters bearing American flags and banners calling for the reelection of President Donald Trump gathered in front of Seaside’s City Hall. Many of them carried firearms in plain sight.

At times, interactions with counterprotesters led to tense moments. As the groups headed down Broadway to the Prom, volume and rhetoric intensified. Police maintained an uneasy peace as emotions flared.

“This is a discussion we need to have,” Barber said.

Griffin initiated the conversation at Monday’s City Council meeting with an impassioned plea.

“For the safety of the citizens of Seaside, I am patently not all right with people wandering the streets of Seaside with loaded assault weapons, guns, bats, knives and all the things they brought with them,” Griffin said. “Some people would say as long as they’re not shooting anybody, let them do it, Well, guess what — they went shooting at someone days later. A kid named Skylor Jernigan walking down the sidewalk here with his AR-15 went down to Portland and shot at people, got picked up.”

Jernigan, 27, was charged with two counts of unlawful use of a weapon, menacing, reckless endangerment and discharging a firearm in connection with the shooting.

“My understanding is he’s already been to another rally,” Griffin said. “Didn’t learn his lesson. Didn’t scare him. There’s got to be some sort of ordinance, law, something that keeps this thing from happening.”

Seaside Brewing Co. lost “thousands and thousands of dollars” in revenue from patrons intimidated by armed protesters, Griffin said, which “ran everyone out of the parking lot” where tents and tables had been set up for visitors to the brewing company at the corner of Broadway and Roosevelt.

“I’m 6-foot-6 and 350 pounds,” Griffin said. “I usually don’t feel threatened. I did not like what I saw. I didn’t like the hordes of families that had to stand up and leave because people are walking by their children feet away with loaded assault rifles. I don’t know what the answer is, but the city doesn’t deserve that.

“What happens when we become known as the town that lets people walk down our streets with loaded assault weapons?” he asked. “I know exactly what’s going to happen. They walked out of my place. They took their kids and they left. Is that what we want? We’ve got to figure something out.”

City Attorney Dan Van Thiel noted the difficulty of regulating weapons on the street. “Generally you can carry guns freely in the state of Oregon,” he said.

Mayor Jay Barber was among those who witnessed the Aug. 8 protests.

“I walked along these people here, holding AK-47s, sidearms, I talked to some of them, who said, ‘We’re here to keep your police officers safe.’ I wanted to say, ‘They don’t need your help.’”

I live down the coast in Florence. Those punk thugs tearing up Portland will show up in Seaside long before Florence. A huge police force has been unable to contain them, Seaside will be easy pickings. I am a former combat Veteran, and dont condone young untrained kids let loose on society with rofles, but I'd prefer someone willing to defend the public, then someone who seeks to attack them. If I hear oneore time those kids attempting anarchy are peaceful protesters for social change, Ill vomit. I truely hope Trump wins in Nov. If liberals decide to increase the anarchy ( which they already approve of), then imagine 70 million armed citizens taking to the streets, many being Combat exp'd. With Law Enforcement and most military at their side.

I will second that , Police need all the help they can get , they are out numbered and can only watch out for themselves . Nothing wrong with open carry in Oregon . Do you want to get kicked in the head or blind sided with a skate board while exercising your freedom of expression. I think not