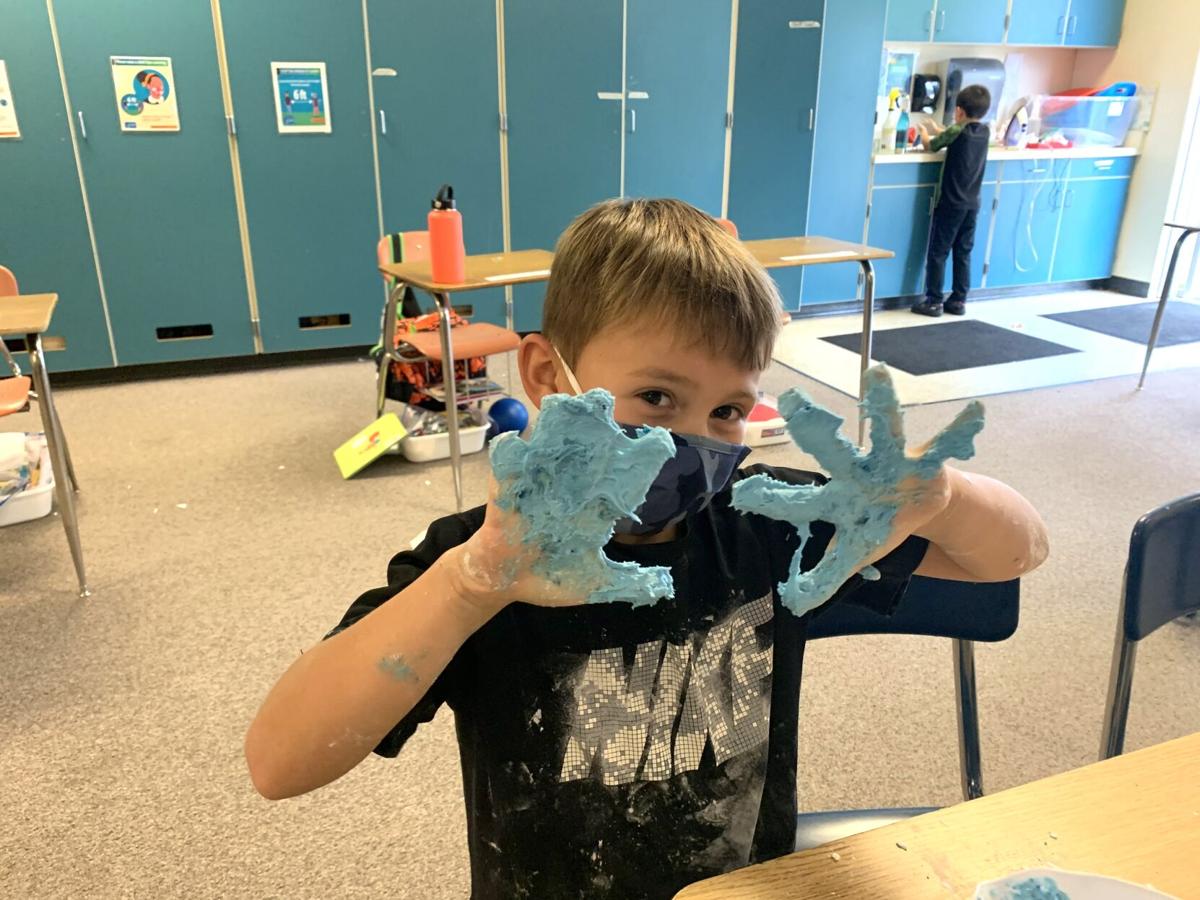 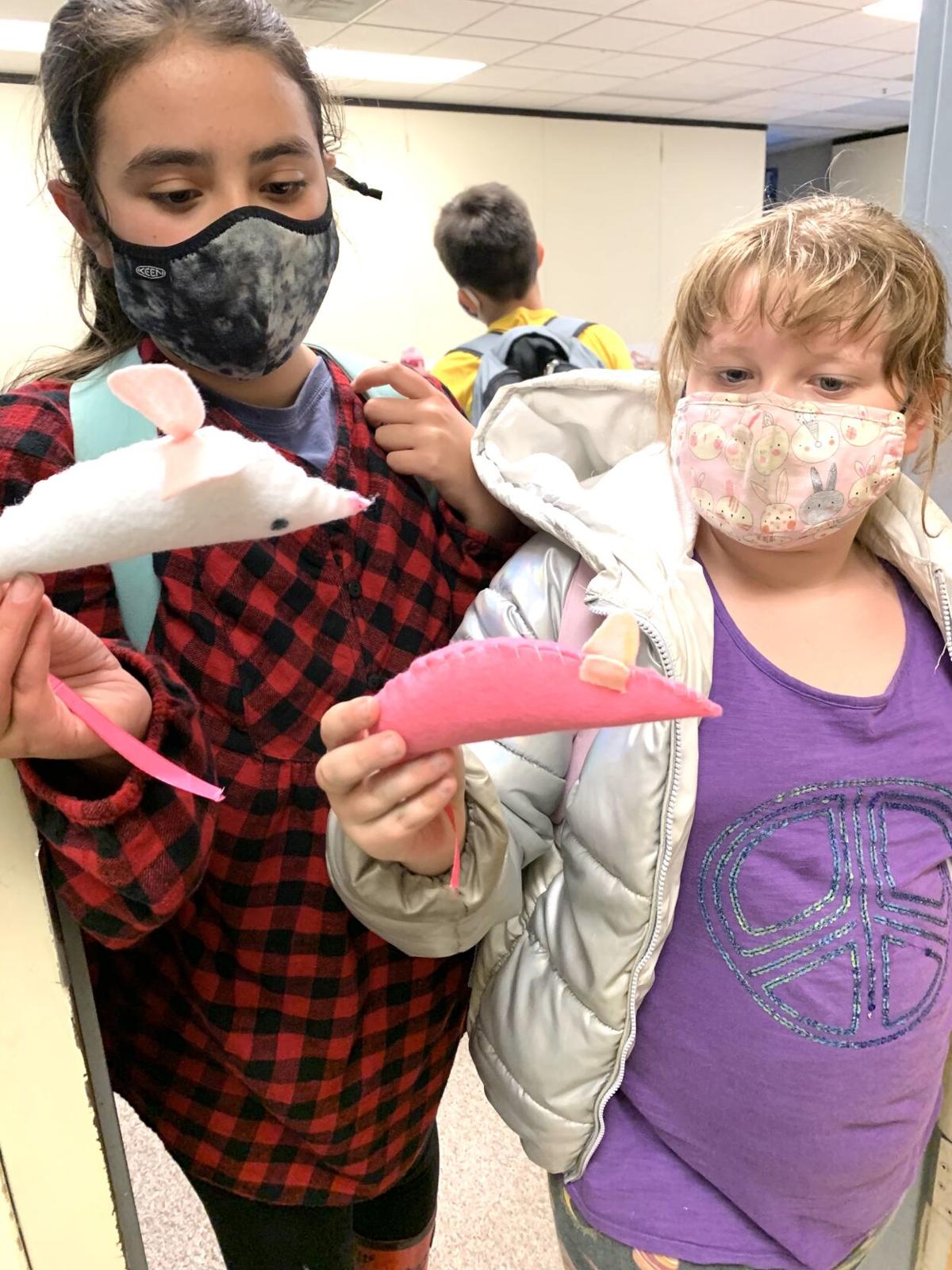 Lola Stewart and Brooklyn Baughman, showing off felt mice they made during a sewing activity in the program for older elementary students. 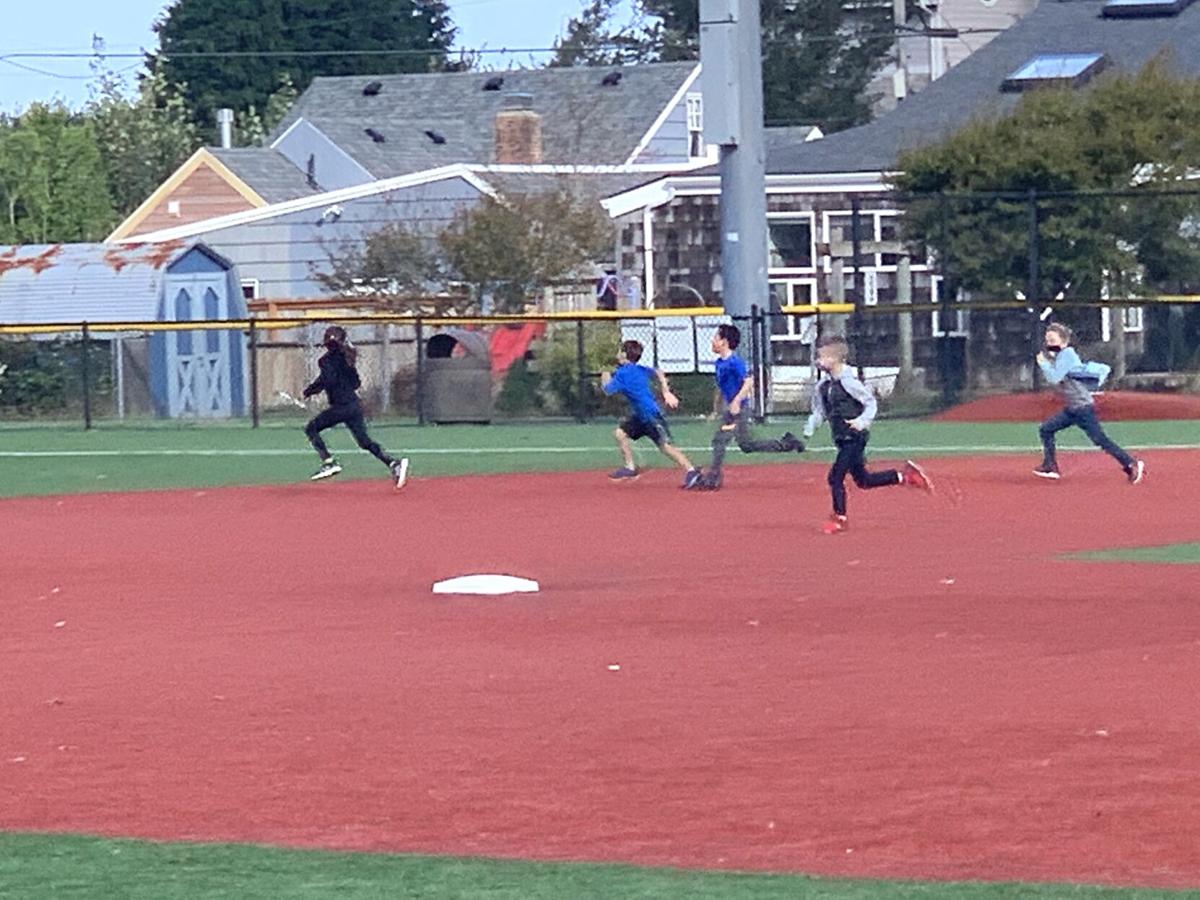 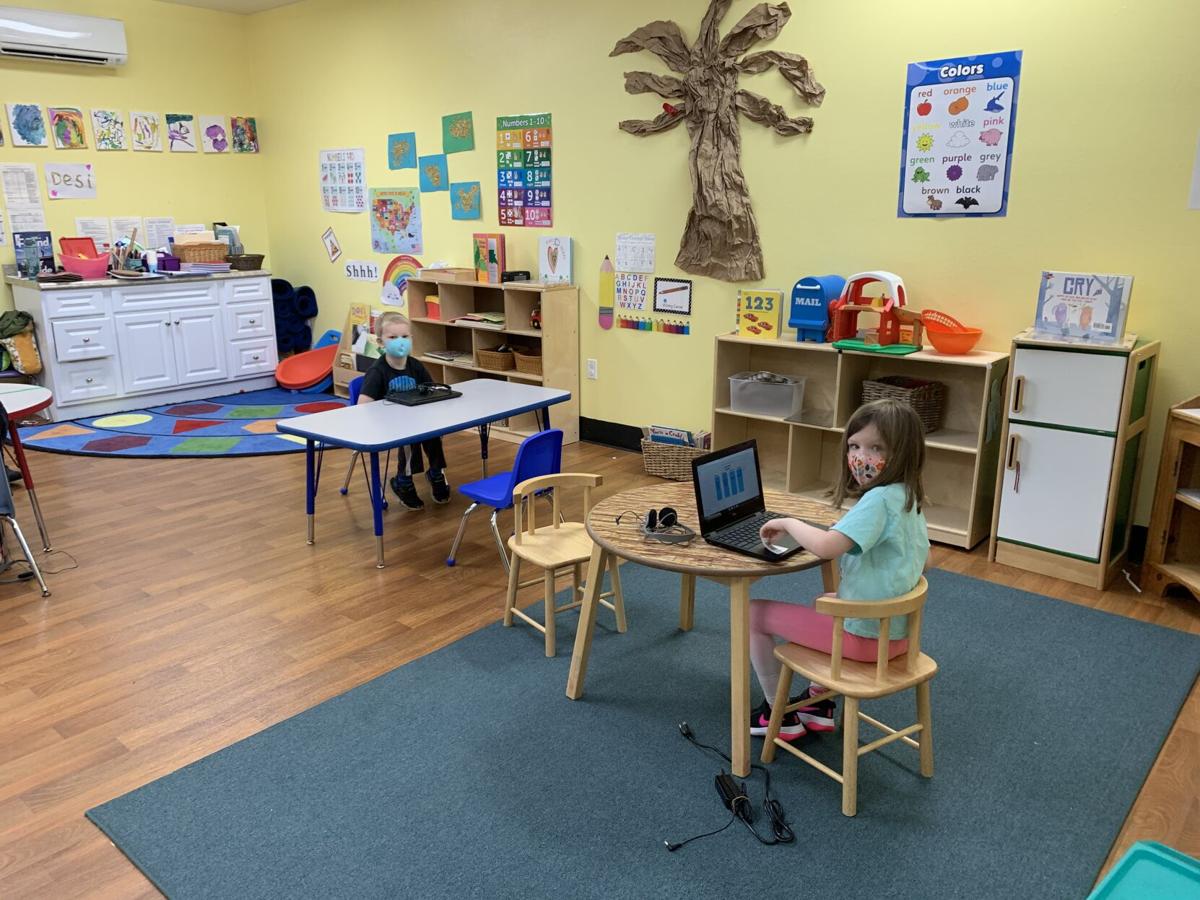 Kindergartners Evan Barrett (left) and Camryn Houck participate in remote learning from their Chromebooks on site at the Sunset Empire Park and Recreation District’s Youth Center. 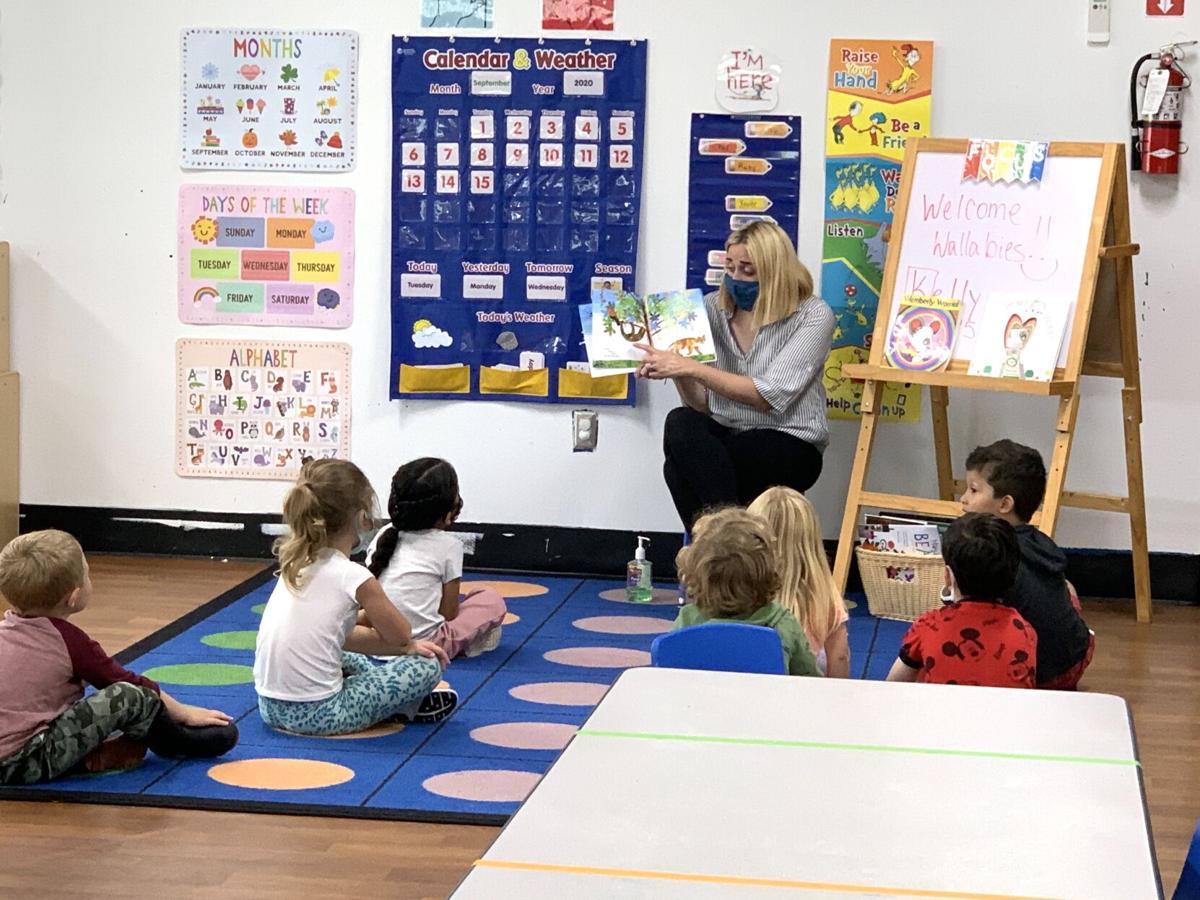 Lola Stewart and Brooklyn Baughman, showing off felt mice they made during a sewing activity in the program for older elementary students.

Kindergartners Evan Barrett (left) and Camryn Houck participate in remote learning from their Chromebooks on site at the Sunset Empire Park and Recreation District’s Youth Center.

Adequate child care has long been an issue in Clatsop County, but the coronavirus pandemic and temporary closure of schools to in-person classes has put additional strain on the area’s limited options.

In the Seaside area, a few organizations are striving to fill the gap.

“We’re in it for the long haul,” said Shelly Owen, youth program manager at Sunset Empire Park and Recreation District, which has been operating emergency child care for students in kindergarten-through-fifth grade since the start of the school year. “We’ll be doing this until things change.”

The park district is providing full, five-day-per-week care for nine kindergartners, 10 first- and second graders, and 10 third-through-fifth graders — along with their usual Learning Ladder preschool program. The kindergartners meet at the park district’s youth center, while the two classes of older elementary students take place at the former Broadway Middle School.

“It’s a whole new ballgame,” Owen said, adding it was “a big step” for the park district. “When you are supporting a totally new style of learning for children, and you’re learning it yourself, it makes it really challenging.”

According to Owen, there is enough demand for child care from local families to open a third classroom, and the district has the space because of their access to the middle school building.

However, the staff of 14 — including Owen, who travels among the classrooms to oversee operations and fill in gaps as needed — is stretched thin. This is a reversal from past years, she added, when she had plenty of staff but limited space.

Owen’s goal from the start was to have two adults per each classroom of 10 to answer questions, help with technology and get the kids logged into synchronous online meetings with their teachers at the right time.

“We haven’t been able to reach that goal, but I’m hopeful we’ll get there,” she said. “It’s challenging right now. Once we get more staff, it will go a lot smoother.”

The whole program was established rapidly when the school district announced its decision to start instruction remotely for at least the first six weeks of the school year. Even then, Owen was drafting plans for numerous different scenarios.

“Two weeks before it started, I said, ‘Look, I just need to plan that this is going to go through the end of the year possibly, and I need to move forward with that in mind and how we’re going to make that work,’” she said.

That sort of flexible, multifaceted scenario-planning continues to define her approach as she looks ahead not only through the end of 2020, but the end of the school year. There is no telling when students will resume in-person education.

Even when they can reconvene on campus, the school district’s proposed hybrid model for elementary aged students suggests classes would have staggered schedules, meaning the child care needs of families would likely evolve but hardly dissipate.

“I’ve got to consider all the different scenarios,” Owen said.

She praised her staff for their dedication and willingness to take on new tasks to support families. As she pointed out, they are not educators but “they’re going above and beyond anything they’ve ever done before.”

“I’ve been so impressed with them,” she added.

Additionally, since March, the park district has only experienced one virus case, which led to youth summer programs being shut down for two weeks. However, there was no report of related cases among the children, their families or other staff members.

Encore Dance Studio has also expanded its program options to serve and support families through the public health situation. In addition to its typical weekly dance and tumbling classes and full-day performing arts preschool and kindergarten for 3- to 6-year-olds, Encore is also providing a full-day program for first- through-12th-graders.

According to owner Denele Sweet, the latter includes academic support to help students with distance learning, mixed with dance and tumbling instruction.

“Our academy is basically like my very own ‘Fame’ school,” she said. “Kids get homework and performing arts with our all-in-one magical program. It’s been wonderful.”