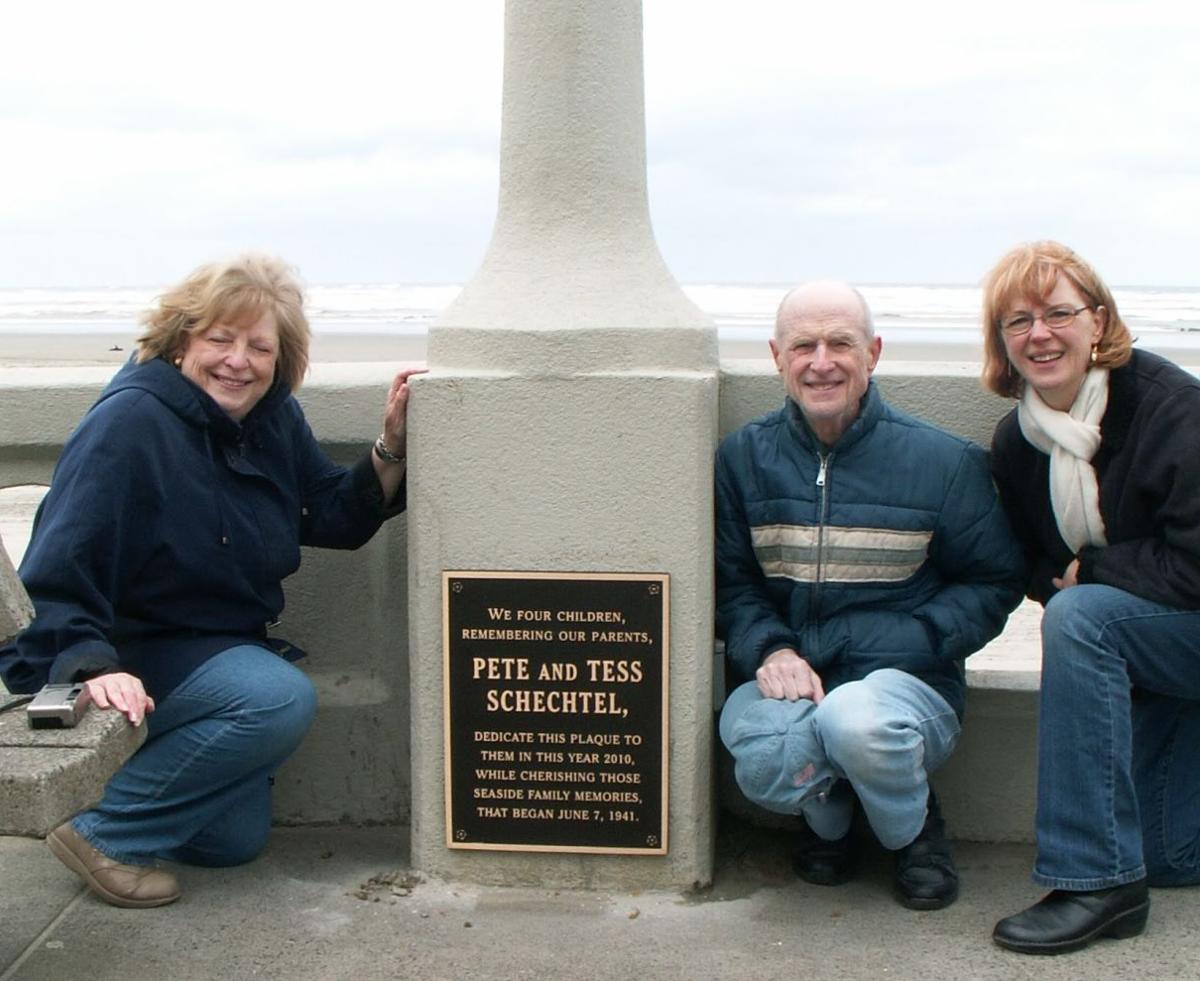 Maureen Stone, Stephen Schechtel and Gail LaMontagne in front of the Schectel plaque on the Prom. The plaque was removed after the family declined to pay a $1,000 renewal fee. 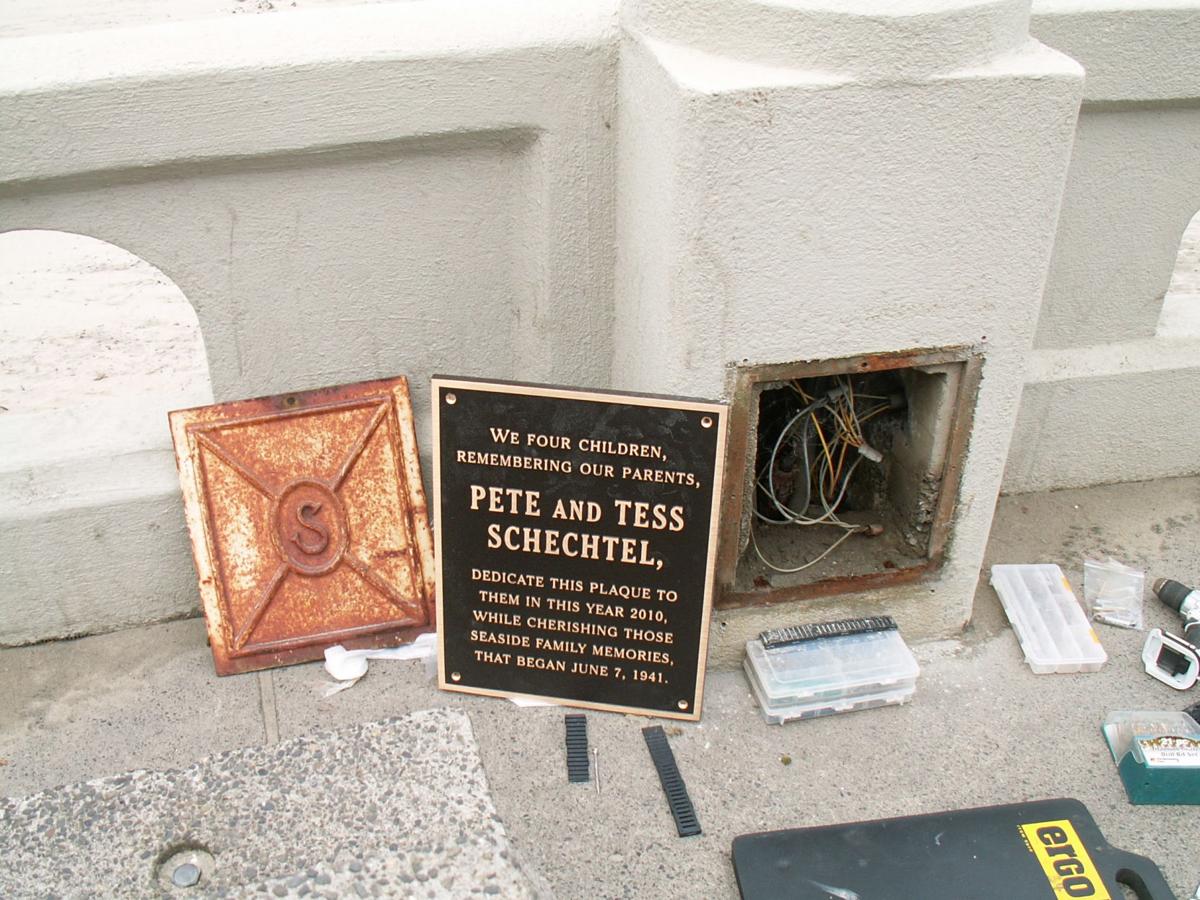 A Prom plaque removed after the family opted not to pay a $1,000 10-year renewal fee.

Maureen Stone, Stephen Schechtel and Gail LaMontagne in front of the Schectel plaque on the Prom. The plaque was removed after the family declined to pay a $1,000 renewal fee.

A Prom plaque removed after the family opted not to pay a $1,000 10-year renewal fee.

Seaside residents and their families are invited to commemorate loved ones with plaques installed on lampposts or benches on the Seaside oceanfront promenade.

But some who purchased plaques a decade or more ago say the program is deceptive.

Gail LaMontagne, of Portland, whose family purchased four plaques, two in 2010 and two in 2011, said terms in the city’s brochure selling the plaques are “vague at best and completely dishonest at worst.”

For $1,500, those who choose to honor their loved ones receive a 15-inch-by-19-inch plaque installed and maintained by the city for 10 years, according to the brochure still in use.

“Prom light pole plaques are donated to commemorate a family member of loved one,” the brochure states. “The city installs and maintains for 10 years.”

LaMontagne said she, her daughter, Abby LaMontagne Peters, her sisters, Maureen Stone and Jane Claire Ott, and her brother, Steve Schectel, were blindsided when they received a call for a $1,000 renewal fee for each plaque to keep them in place for the next 10 years.

She said they were told if they did not pay the $2,000 renewal for the two plaques coming due, the city would remove them within 30 days. “I think it’s a serious error on the city manager’s and city council’s part. It’s not a contract. All we have is a brochure when we bought a plaque.”

The brochure says nothing about temporary placement or future charges, LaMontagne said. “Not a hint. All it says is that the city is responsible for maintenance for 10 years. To me, that was reasonable.”

She said the family had been prepared to take on maintenance and cleaning after the 10 years, but “there’s nothing that indicates in the brochure any language that insinuates it’s a temporary placement.”

Lillian Moore Lind, who lives in Coeur d’Alene, Idaho, said she and her family made Seaside their vacation spot for many years. Her sons David and Bill each ran businesses in Seaside.

“There was no time limit,” Lind said. “There was an unspoken assurance that the $1,500 covered forever ... only a tidal wave could remove it.”

Since the family was not informed at the time of purchase they would need to come up with a renewal fee in 10 years, she said, the plaque should be reinstated.

Assistant City Manager Jon Rahl said the plaque program was approved by the City Council in 2004 and run by the Public Works Department.

“The form that purchasers must complete and fill out prior to purchase is attached and notes that the ‘city will install and maintain for 10 years,’” Rahl said.

Since their letter to the city in February, LaMontagne and her family have opted not to renew with the city and reclaimed two of their four plaques. The two other family plaques come due next year.

LaMontagne had a warning for others leasing plaques on the Prom.

“You’re just going to get a phone call, and you’re going to be told, ‘In 30 days, we need $1,000 or we’re going to take your plaque down.’ You can put your $1,500 plaque in your backyard, I guess. It completely sickens me the city of Seaside would be so unscrupulous.”