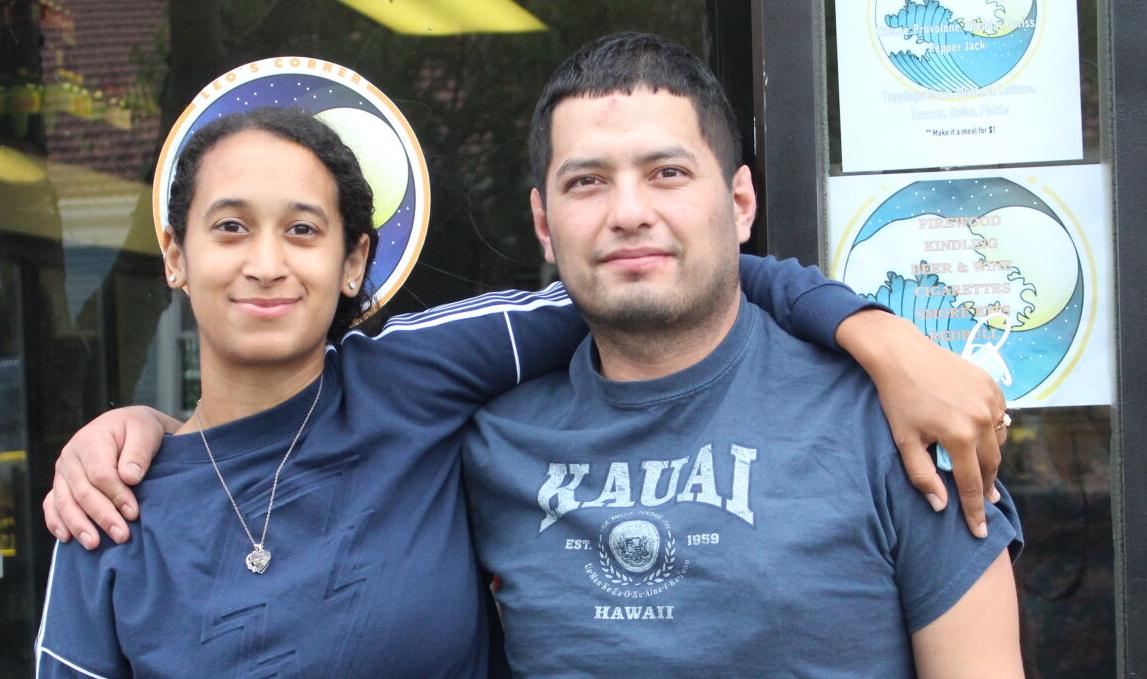 Shontae Brown and Leo Luna are the owners of Leo’s Corner, a new convenience store and deli on North Columbia Street that opened in early June.

Shontae Brown and Leo Luna are the owners of Leo’s Corner, a new convenience store and deli on North Columbia Street that opened in early June.

There is a new, convenient place in Seaside to grab a bottled beverage, batch of firewood, cup of coffee or a deli sandwich.

“Things are slowly but surely falling into place,” Luna said.

The couple has been interested in opening a family run business for several years. Luna has an extensive background in the grocery and restaurant industries while Brown has worked at various restaurants in the area, including Tora Sushi in Seaside and Lazy Susan Cafe in Cannon Beach.

Earlier this year, they learned a space in the building situated on the corner of Broadway and Columbia streets was available and decided to open the store. They had just signed the lease and were planning to open their new establishment by spring break when the coronavirus pandemic hit, causing businesses to temporarily shut down.

“The whole thing was a panic,” Brown said.

She said there is still a lot of uncertainty about the future. The business has been “better than we hoped,” she said. “Nothing is going as planned, but it’s still working out.”

Luna and Brown are familiar enough with the seasonal nature of Seaside’s economy to know they’re not out of the woods yet.

Both are working long hours and multiple days at the store. They are also maintaining part-time employment at other local businesses — Brown is continuing at Lazy Susan while Luna works three nights at Mo’s Restaurant in Cannon Beach. They haven’t hired anyone to help at the store, Luna said, because they don’t want to potentially have to let them go just a few months down the road. The young couple is also raising two boys, ages 5 and 1, who spend time at the market.

“We don’t want to get cocky, we don’t want to jinx ourselves,” Brown said. “It sucks right now because we’re tired, but I just keep reminding myself it’s temporary and it’s for a greater cause.”

Their backgrounds in the service industry also translate into a strong desire to provide exemplary customer service and an understanding of the difference it can make in building customer loyalty.

“Everybody is going to get treated the same: very, very respectfully,” Luna said. “We’re super thankful to see every single one of (our customers).”

Affordability is another top priority for the owners. Brown said they strive “to get the best deals so we can offer the best deals for a convenient store that is in downtown Seaside.”

The market encapsulates the convenience-store concept well. It offers a little bit of a lot, including a myriad of alcoholic and nonalcoholic beverages, tobacco products, firewood, imported beer, groceries, snacks, personal health and hygiene items and some beach toys and towels.

For the deli portion, they offer made-to-order sandwiches with fresh-cut meats and cheeses and a small selection of coffee drinks. Once they’ve grown accustomed to the rhythm of the business, they plan to add more prepared foods to their selection.

Brown said they also take suggestions from patrons. If they know a customer is local and will be back repeatedly, they’ll try to stock the beverages or tobacco products they want.

While they are becoming acquainted with the challenges of small business ownership, Luna and Brown also have their sights set on how rewarding it will be. They’re willing to put in the effort now, whether it’s staying open until 2 a.m. on the Fourth of July or stocking a customer’s preferred type of beer.