Gearhart Transportation System Plan U.S. Highway 101 reconfiguration plan. Sidewalks and drainage may be farther depending on availability of funds, Gearhart City Administrator Chad Sweet said The changes to the lane configuration may be done by removing the existing paint and reapplying the new configuration without changes to the asphalt. 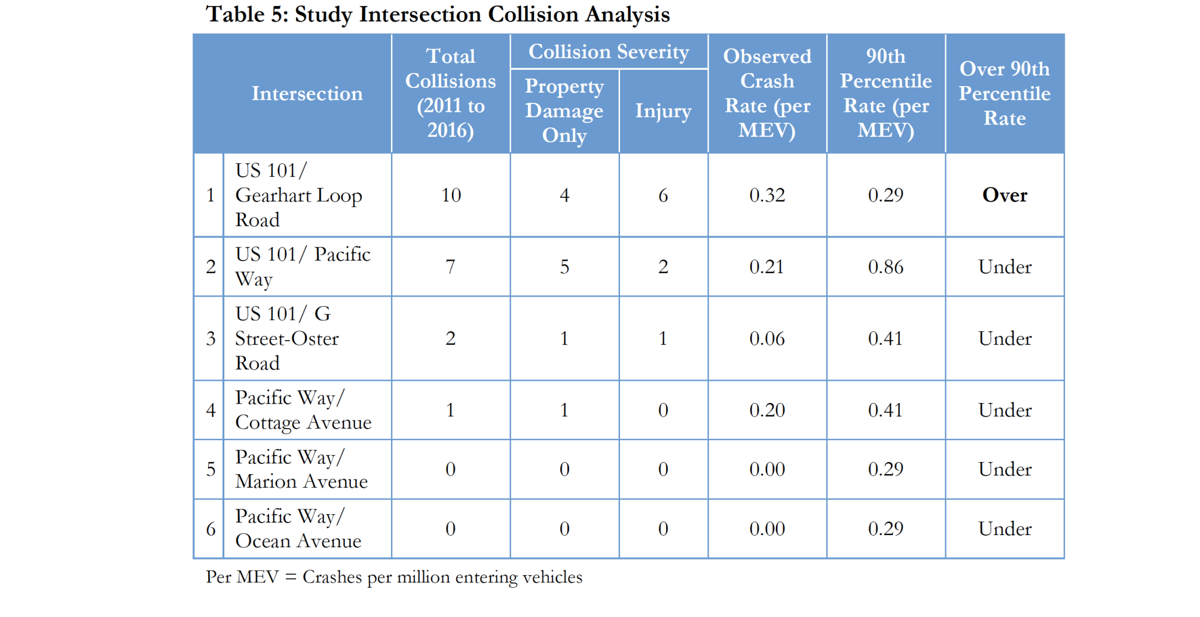 Gearhart Transportation System Plan U.S. Highway 101 reconfiguration plan. Sidewalks and drainage may be farther depending on availability of funds, Gearhart City Administrator Chad Sweet said The changes to the lane configuration may be done by removing the existing paint and reapplying the new configuration without changes to the asphalt.

U.S. Highway 101 could narrow in Gearhart to reduce crashes and injuries.

The highway would go from four lanes to two lanes with a center turn lane.

The configuration could reduce travel speeds and improve conditions for motorists trying to turn on and off the busy highway. One advantage is that it would make room for the turn lane and bicycle and pedestrian options without the need to expand the right of way.

The city, the state Department of Transportation and the Northwest Oregon Area Commission on Transportation heard plans for the potential changes at a meeting in Astoria last week. The commission is made up of local leaders and stakeholders to address transportation issues in Clatsop, Columbia and Tillamook counties and the western portion of Washington County.

“There’s a slew of things we need to address in Gearhart,” Ken Shonkwiler, a senior region planner with the Department of Transportation, said after the meeting. “We met with Northwest ACT to do more regional outreach and explain the importance of it.”

The state is conducting a facilities plan to look at pedestrian and bike access to address specific concerns this upcoming year, he said.

In 2017, with the adoption of its Transportation System Plan, Gearhart identified 11 projects to improve roadway segments and intersections that could cost an estimated $23 million to $25 million to complete.

Consultants prioritized investments with four tiers, from the $1.2 million likely to be available through existing funding sources to a more than $20 million wish list that exceeds the likely level of city and state funding through 2040.

Seventy-five potential projects are listed in the plan, which outlines policies and projects considered important to protecting and enhancing the quality of life in Gearhart.

For Highway 101, the plan presents an option for the new configuration through most of Gearhart, with additional lanes at intersections as needed.

Traffic safety and emergency evacuation is a key concern to city leaders, given their role in moving people during emergencies, such as a tsunami.

“We’re still having internal conversations on whether this could be done with striping, if it needs to be a part of a paving project, or if it needs to be part of another project,” Shonkwiler said. “We’re still really in the beginning of this. We know the direction right now. We’re just trying to find out the details.”