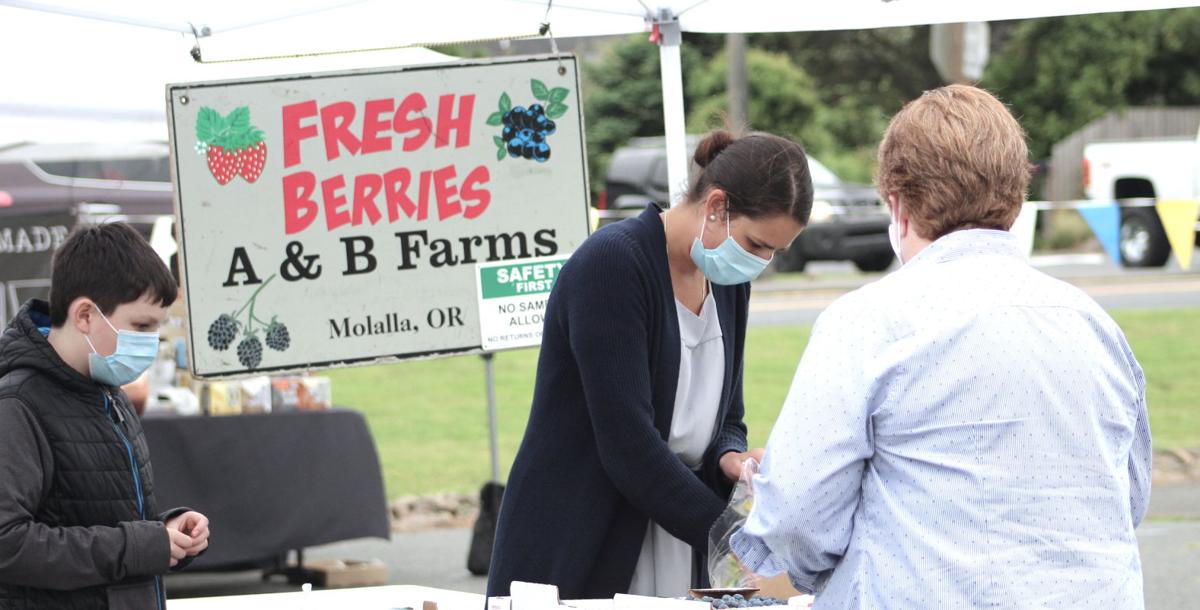 Anatoly Kuznetsov and Katerina Reutov, of A & B Farms, help a customer at the Seaside Farmers Market in late June. The market runs through Sept. 30.

A & B Farms, from Molalla, sells a colorful array of berries at the Seaside Farmers Market. 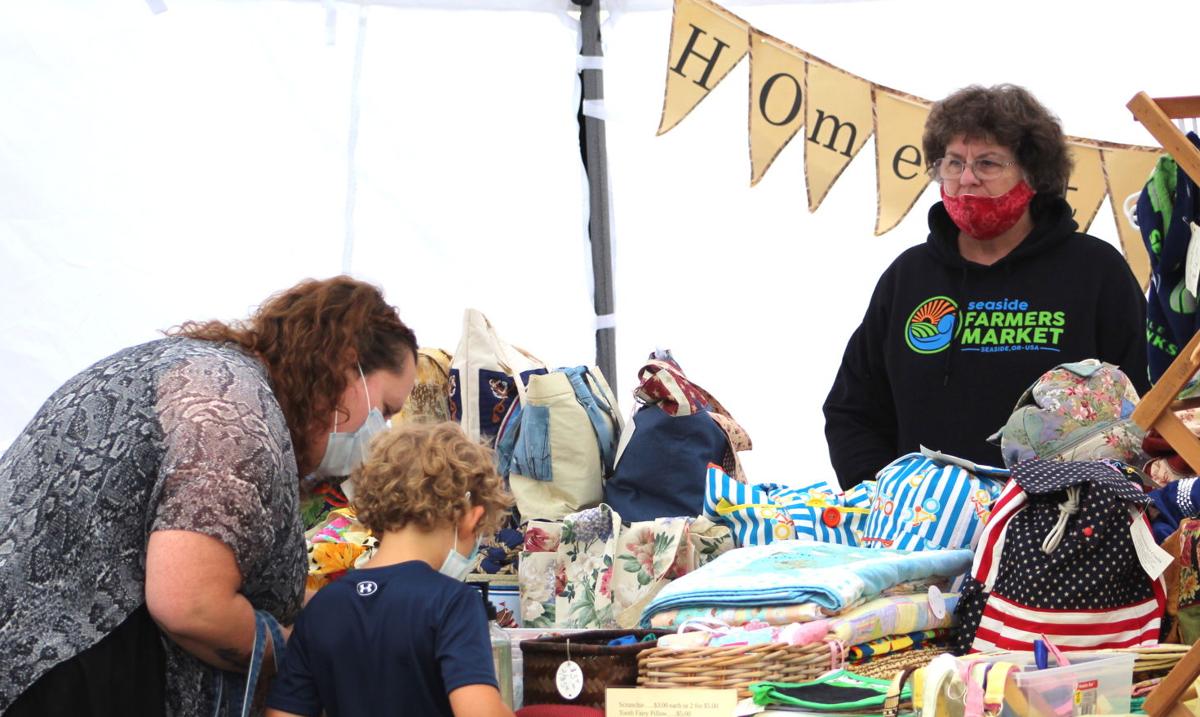 Diana Gilmour, owner of Homestead Crafts, speaks with customers during the Seaside Farmers Market on June 24. Gilmour sells masks and other home-crafted items. 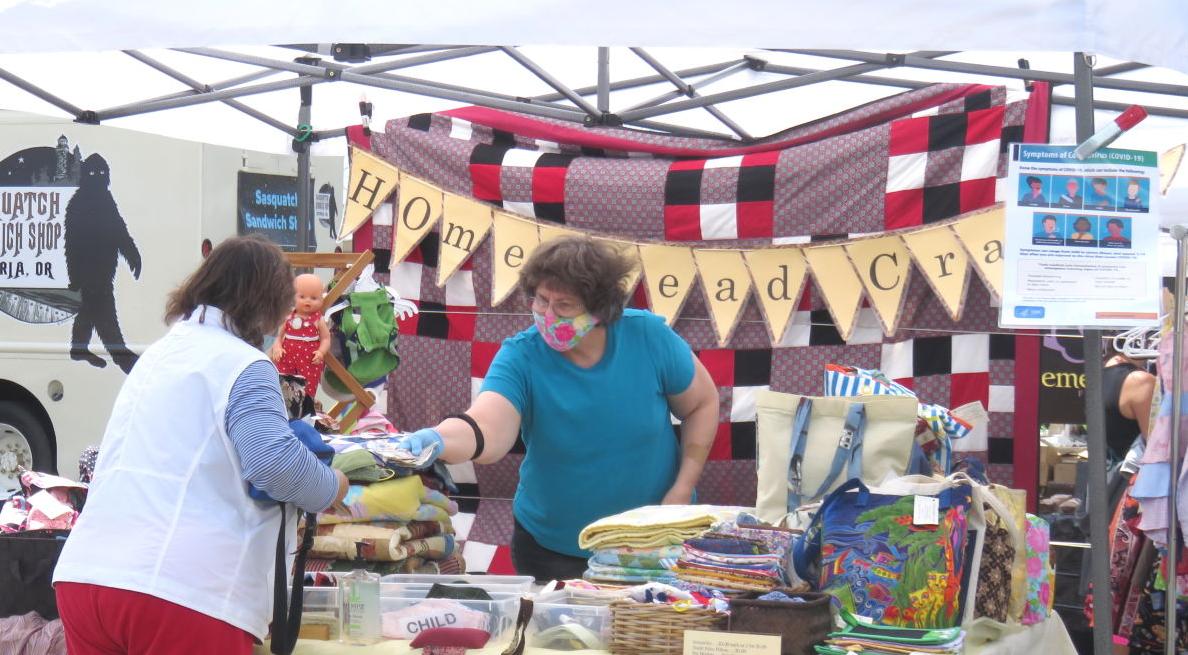 Diana Gilmour, owner of Homestead Crafts, sells her home-crafted goods during the Seaside Farmers Market. The market takes place from 2 to 6 p.m. Wednesdays. 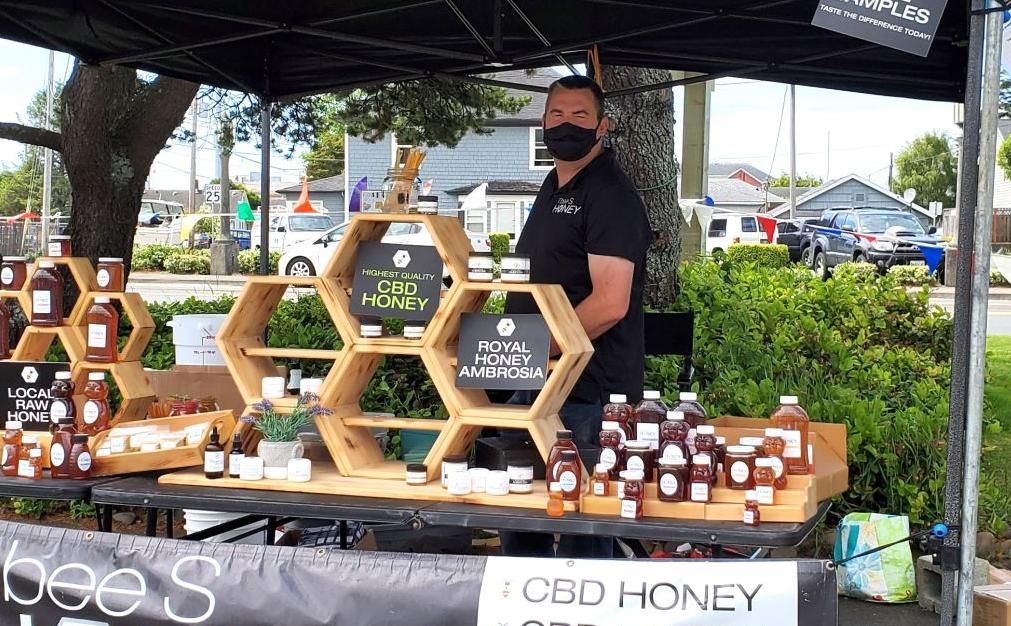 Ron Stark mans the booth for his business Tee B S Honey at the Seaside Farmers Market on June 17.

Anatoly Kuznetsov and Katerina Reutov, of A & B Farms, help a customer at the Seaside Farmers Market in late June. The market runs through Sept. 30.

A & B Farms, from Molalla, sells a colorful array of berries at the Seaside Farmers Market.

Diana Gilmour, owner of Homestead Crafts, speaks with customers during the Seaside Farmers Market on June 24. Gilmour sells masks and other home-crafted items.

Diana Gilmour, owner of Homestead Crafts, sells her home-crafted goods during the Seaside Farmers Market. The market takes place from 2 to 6 p.m. Wednesdays.

Ron Stark mans the booth for his business Tee B S Honey at the Seaside Farmers Market on June 17.

The Seaside Farmers Market is back in season this summer to connect locals and visitors with fresh food and artisan goods, although the first couple sessions were marked by fewer vendors and slightly different atmosphere.

“This is our sixth year, so it’s become routine — this is what we do every summer,” said Scott Thompson, of Blackberry Bog Farm. “Although I have to say, the environment is not routine.”

Thompson was referring to the face coverings worn by vendors, staff and customers alike because of the coronavirus; the lack of live music and a sitting area; the one-way entrance and exit; the space between the stalls, which are normally flush against one another to fill up the area; and the arrows on the ground of the parking lot beside the former middle school where the market is held.

Usually, Thompson said, “there are a lot of visitors just wandering and looking,” while so far this year it seems there are notably few tourists in attendance, and most of the people attending the market are coming to buy not browse.

As a vendor, however, Thompson doesn’t mind that aspect.

The lack of the strong social component normally associated with farmers markets was also noted by Angi Wildt, who manages the market on behalf of the Sunset Empire Park and Recreation District, although she reported a strong turnout of more than 250 patrons during the first market in June.

That’s compared to an average of 45 to 50 per session last year. Except for Sasquatch Sandwich Shop, of Astoria, the normal prepared food vendors — such as Sea Star Gelato and Smoke Salmon Chowder — can’t be on-site for the time being, although the organizers are still promoting their usual vendors on the market website. Nonprofit groups will also not be hosting their normal booths.

Some vendors will only be at the market part time, or as they are able to create their products.

According to Wildt, one of the bakers who usually attends wasn’t able to sell during the first market because she couldn’t find the sugar she needed for her baked goods.

“It’s been a little bit of a challenge for some people to find the ingredients and the products they need,” Wildt said.

The Seaside Farmers market is following guidance from the Oregon Health Authority in requiring face masks and social distancing practices. They have coverings available for people who don’t show up with their own. Also, after discussion, the organizers have decided they can allow kids and dogs at the market, as long as there is room for everyone to spread out and maintain their social distance.

“Mostly, we want to keep everyone safe who comes to the market,” Wildt said.

She and Melissa Ousley, the recreation district’s new special events and marketing director who is helping plan and execute the farmers market, have received guidance from the Oregon Farmers Market Association along with other organizers in the state who are grappling with how to implement regulations in the market environment.

In Wildt’s mind, however, there was never a question of whether they would still be putting on a farmers market this year.

“I felt we would be able to have a market, because I knew we were essential,” she said. “It’s nice we have a place for people to get outside and shop where might feel more comfortable.”

Katerina Reutov, who was selling an array of vibrant berries at the A & B Farms booth, said it’s been a bit of a different summer for them, with various markets in the area canceling or changing their structure. She was happy to be back in the farmers market environment.

“It kind of feels a little back to normal compared to a few months ago,” she said.

Thompson, whose farm also is part of the community-supported agriculture program and has pasture-raised chickens, said one unexpected but positive ramification of the pandemic is people increasingly turning to local food.

“People are interested in food security and one of the ways they feel more secure in their food is when they have access to local food,” Thompson said. “From that perspective, it’s made people look for local alternatives, and we’re one of those alternatives.”

The Seaside Farmers Market accepts nutrition program checks, which enable qualified recipients to purchase fresh fruits and vegetables at the farmers’ booths. They also accept electronic bank transfer transactions and have a match program for low-income individuals to spend on grocery items.