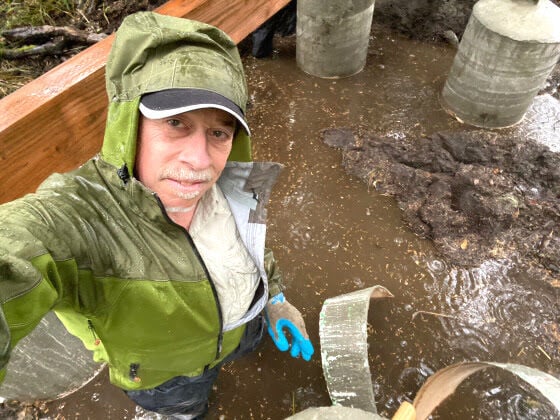 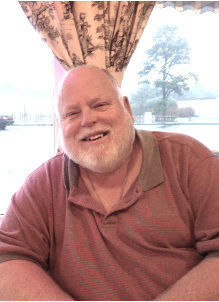 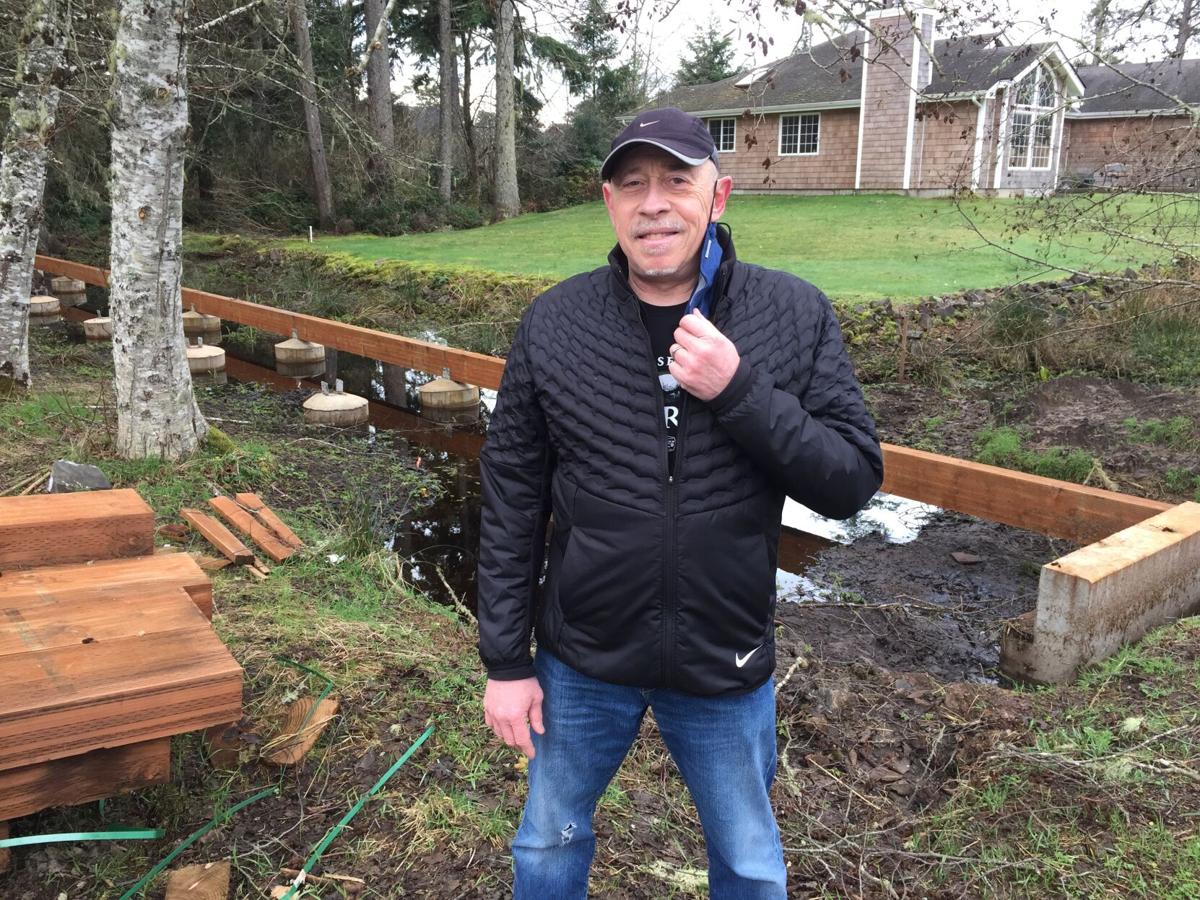 Ridge Path volunteer organizer Steve Urman. The path under construction between Ninth and 10th streets is behind him. 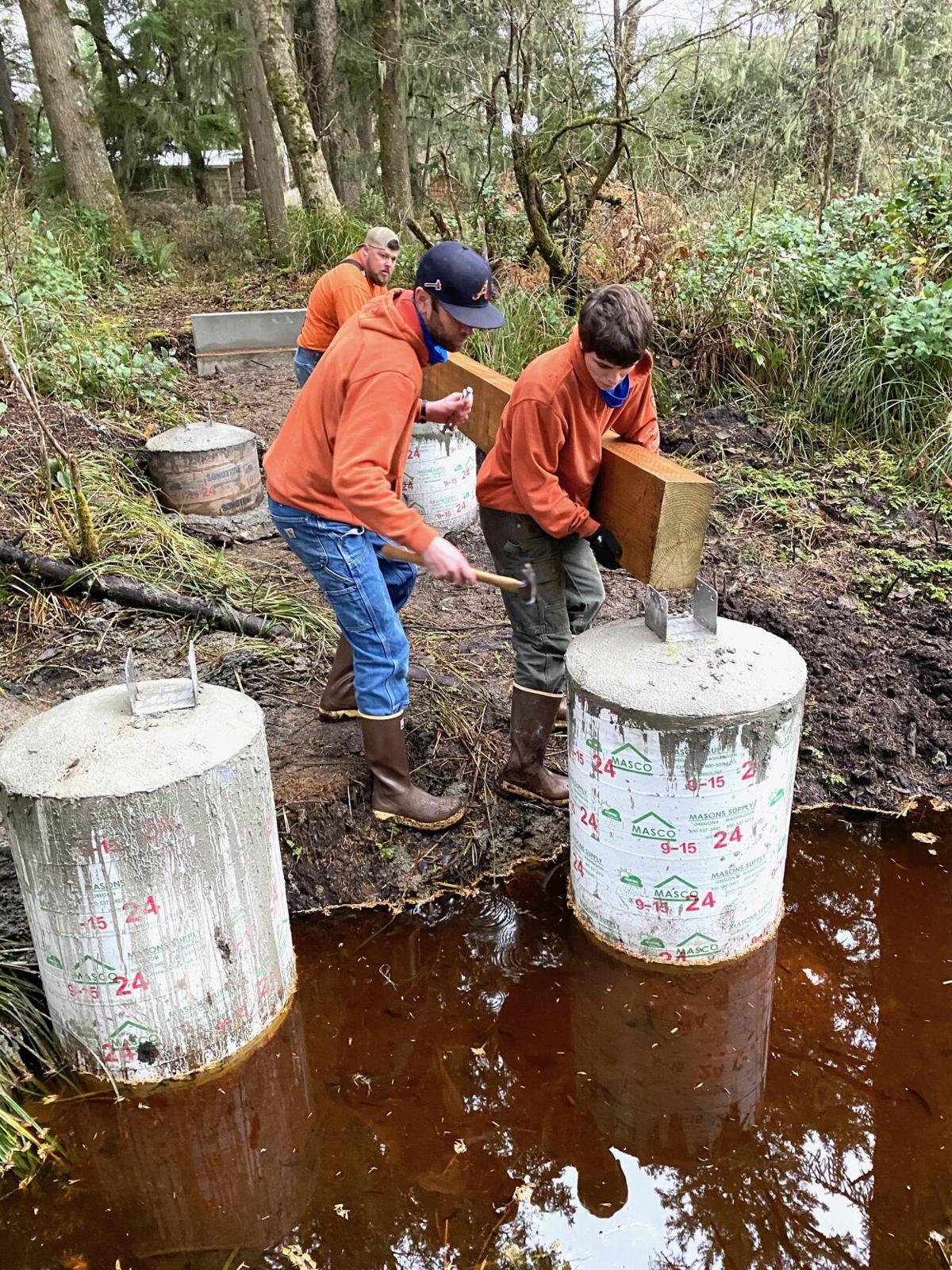 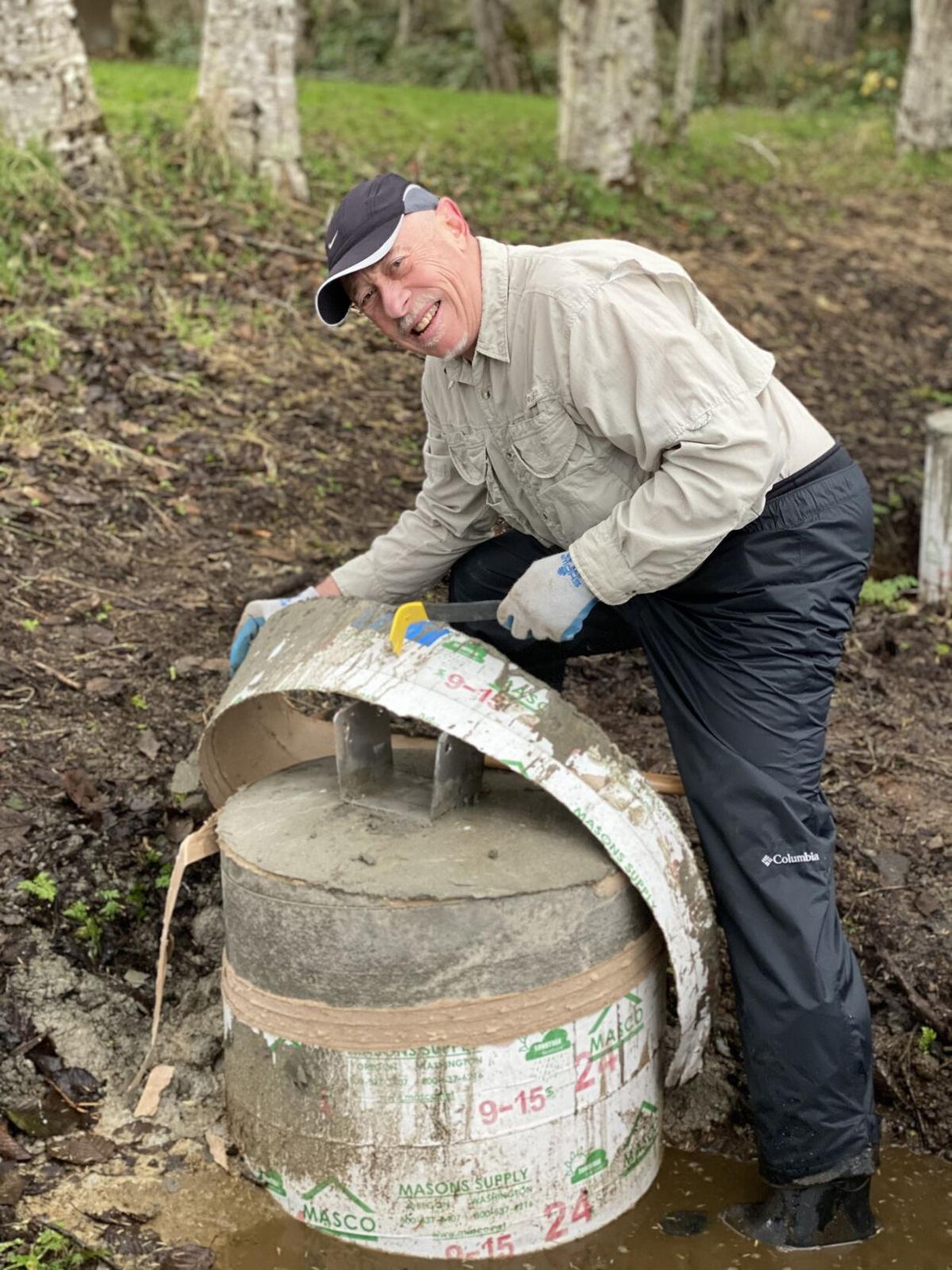 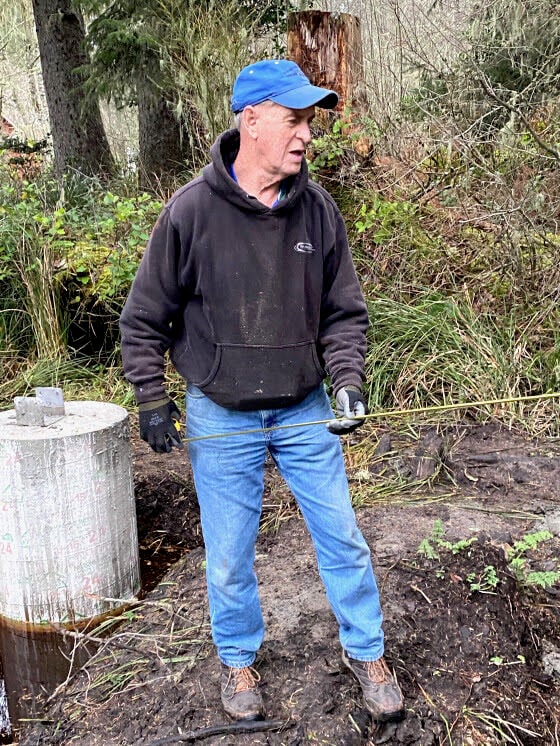 Russ Taggard, one of many volunteers in the project since its inception. 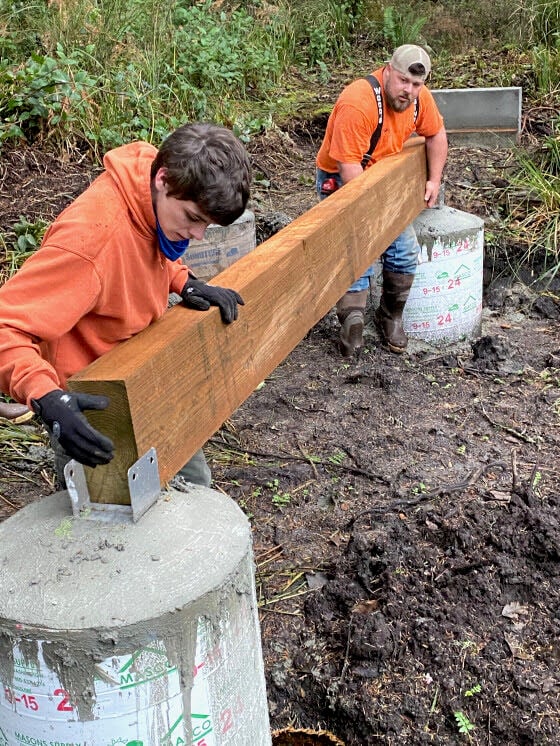 Gearhart public works employees Gage McFadden and Stephen Petersen place a rail onto a concrete base.

Concrete base to hold the bridge. 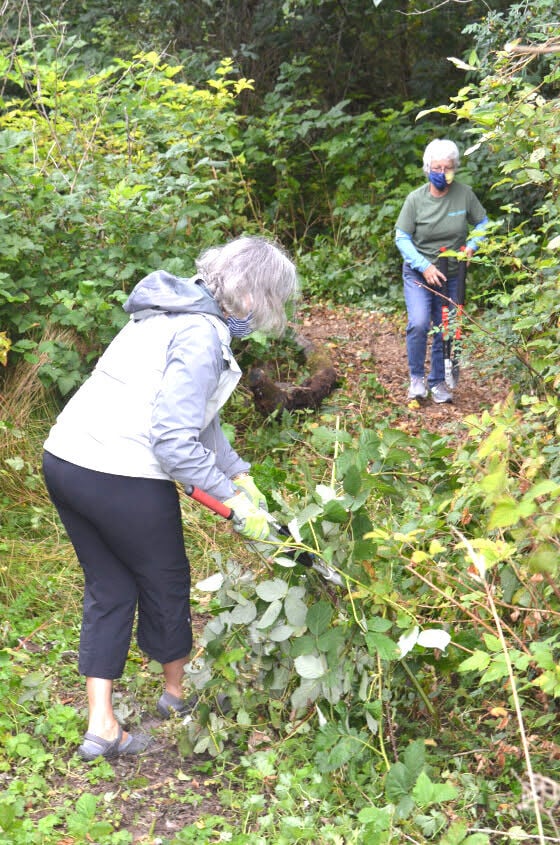 Volunteers cut back overgrowth on the Ridge Path. 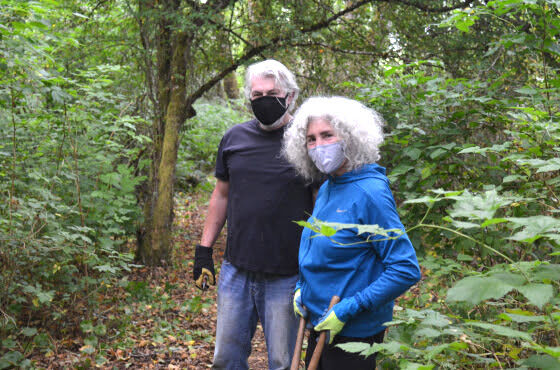 Randall Sullivan and Vicki Romm were among volunteers along the Ridge Path.

Randall Sullivan and Vick Romm among volunteers along the Ridge Path. 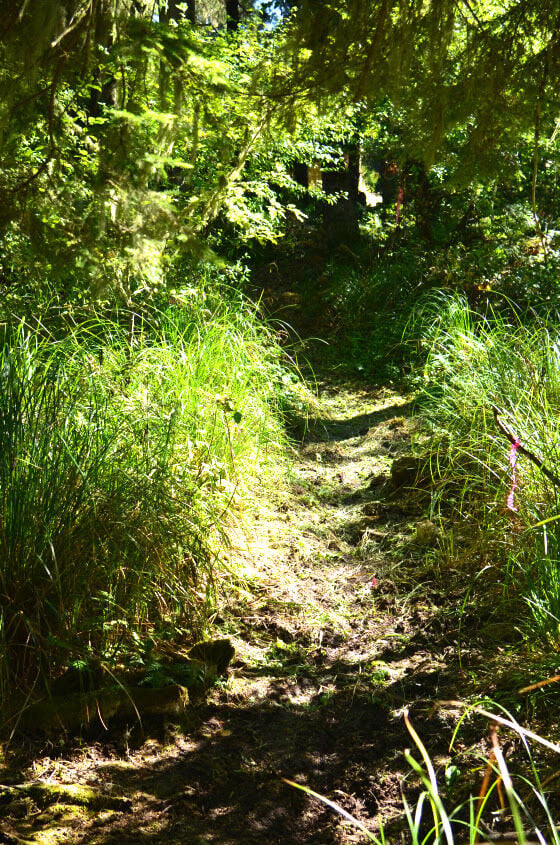 The Ridge Path in Gearhart.

Ridge Path volunteer organizer Steve Urman. The path under construction between Ninth and 10th streets is behind him.

Russ Taggard, one of many volunteers in the project since its inception.

Gearhart public works employees Gage McFadden and Stephen Petersen place a rail onto a concrete base.

Concrete base to hold the bridge.

Volunteers cut back overgrowth on the Ridge Path.

Randall Sullivan and Vicki Romm were among volunteers along the Ridge Path.

Randall Sullivan and Vick Romm among volunteers along the Ridge Path.

The Ridge Path in Gearhart.

When he ran for Gearhart City Council in 2014, City Councilor John Duncan listed as one of his top goals to complete and extend the portion of the Ridge Path from Eighth Street to Gearhart Loop Road.

Duncan and his volunteer army marched through mud, brambles and elk droppings with loppers and saws. He worked so long and with such pride that other volunteers pled fatigue to convince him it was time to quit for the day. He was out working on the path two days before his death in September 2015.

Duncan’s widow, Sandy, sought to remember her husband in a way that would have been meaningful to him. With her cooperation, Gearhart established a fund for “Duncan’s Crossing,” a project designed to bridge wetlands and connect the path to Gearhart Loop Road.

“John saw the completion of the Ridge Path between Ninth and 10th streets and then north from 10th Street along the Neacoxie to Gearhart Lane as an opportunity to do a couple of things at once,” volunteer Bob Widdop said. “As an engineer it was a chance to use his skills for a public good and to organize the public to participate in a hands-on project that gave a significant sense of accomplishment to all involved.”

The former Native American trail runs between privately owned residential properties within the blocks between Cottage Avenue and Neacoxie Creek, extending from F Street on the south to 10th Street on the north. The first 11 blocks were established by the original plat of Gearhart Park, as laid out and recorded by M.J. Kinney in 1890.

The path deviated through the years as houses sold and lot lines shifted, but the trail retained its magic and became an iconic symbol of Gearhart.

In 1985, the city’s master plan called for the city to preserve and enhance the Ridge Path as a recreational asset for the city and a segment of the Oregon Coast Trail by establishing connections to the path, allowing public access and maintenance.

The city procured an easement for an extended path from 10th Street to Gearhart Loop Road, Russ Taggard, a planning commissioner and Ridge Path volunteer, said, with the vision of a “seamless path to follow the founders’ lead.”

At the request of his widow and with the interest of volunteers, the city set up a memorial fund in honor of Duncan, the proceeds to be used to complete Duncan’s Crossing, with the goal of wooden walkways to span wetlands along the path between Eighth and 10th streets, along with extensions north to Gearhart Loop Road.

Duncan’s unfinished plan was revised by Widdop, but met with state and federal regulatory hurdles.

In 2019, the city hired consultant Austin Tomlinson to work through the process and write the application to extend the walking path through the wetlands. The U.S. Army Corps of Engineers, in conjunction with local tribes, also required an archaeological survey to make sure there wasn’t anything of historical significance in the area.

Survey and wetlands maps were updated and the Army Corps and Oregon Department of State Lands approved the joint permit application in March.

Part-time resident Steve Urman and his wife were walking along Gearhart Loop Road last June when they saw a small sign for the Ridge Path. “We had never seen this part,” he said. “It’s beautiful.”

He contacted the city and asked City Administrator Chad Sweet for an update.

“Chad said, ‘Oh my gosh we’ve been waiting for someone to come out and get this thing back to life again.’”

Urman, a physician based in Portland, got involved.

He sent letters to residents, set up meetings and gathered new groups of volunteers. Work parties resumed in August.

Keith Keranen Excavating donated time and labor to dig in the stream and lay the 18 supporting beams. Mark McFadden, of the city’s public works staff, brought city staff to help put in the supporting beams, railing support and decking.

With $12,000 raised from donors and an additional $12,000 budgeted from the parks budget, the city hopes to meet or exceed the anticipated $25,000 to $30,000 project cost. The city has also applied for a grant through the Pacific Power Foundation.

In September, Urman began additional fundraising to meet a rise in the cost of materials.

Teams are now installing railing support and will complete the bridge with decking.

“The current status is we are working with the volunteers, public works and appropriate weather to complete the beam installation,” said Taggard, who plans to work on the project through completion. “This stage requires young muscle to pack the beams from 10th to the concrete piers. Once the beams are set with the help of public works, the rest of the project is all volunteer.”

New signs will be placed all along the trail. In the spring, maintenance is expected, especially at the north end of the trail.

“We have a great group of volunteers and public works staff pulling together to get this job done,” Sweet said. “Building the Ridge Path extension and the bridge crossing has been a wonderful experience.

Sandy Duncan said she’s happy the work is proceeding. “Very happy. We’re anxious to be able to walk on it, be able to push our baby carriages and ride our bicycles,” she said.

It is the wide participation of longtime and more recent residents that Duncan would have appreciated most, Widdop said.

“Although he would probably be shocked by the delay and expense of getting the federal approval for the work between Ninth and 10th, I think he would be more pleased that a maintenance work party five years later drew mostly new and longtime residents who hadn’t been involved previously and that the final work to 10th Street has significant volunteer input,” he said.

Volunteers will be out again on Feb. 16, Sweet said. “It’s nice to see people pulling together to accomplish something positive that will be used by many. I imagine John Duncan would approve.”