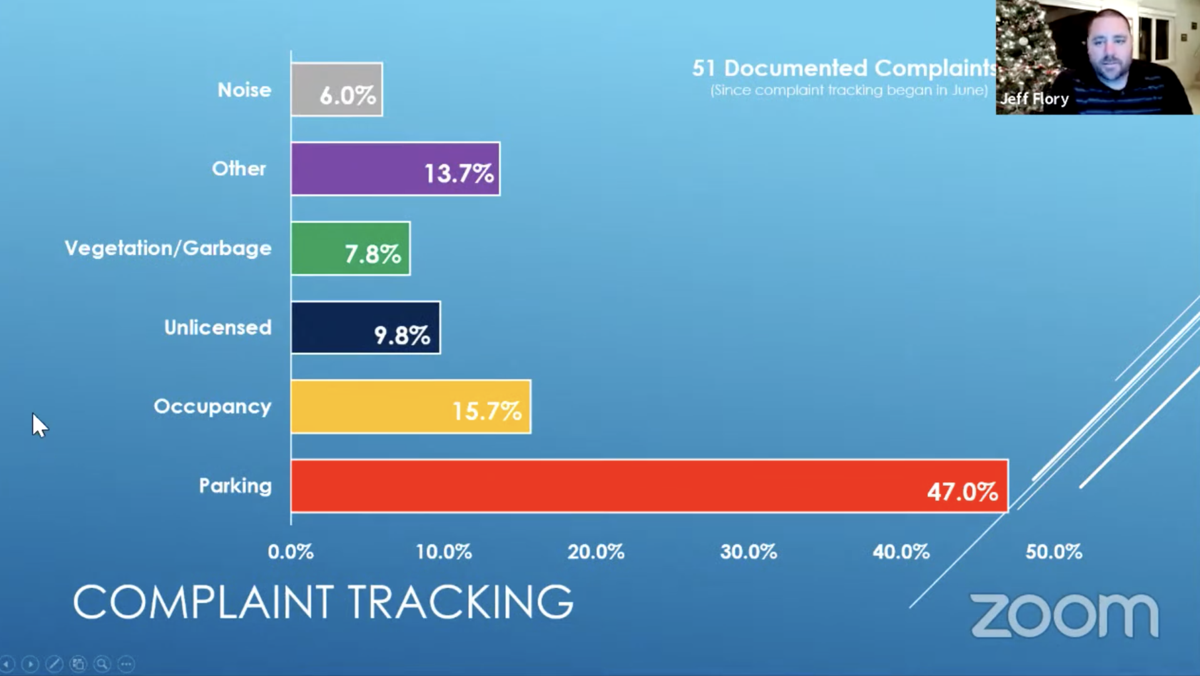 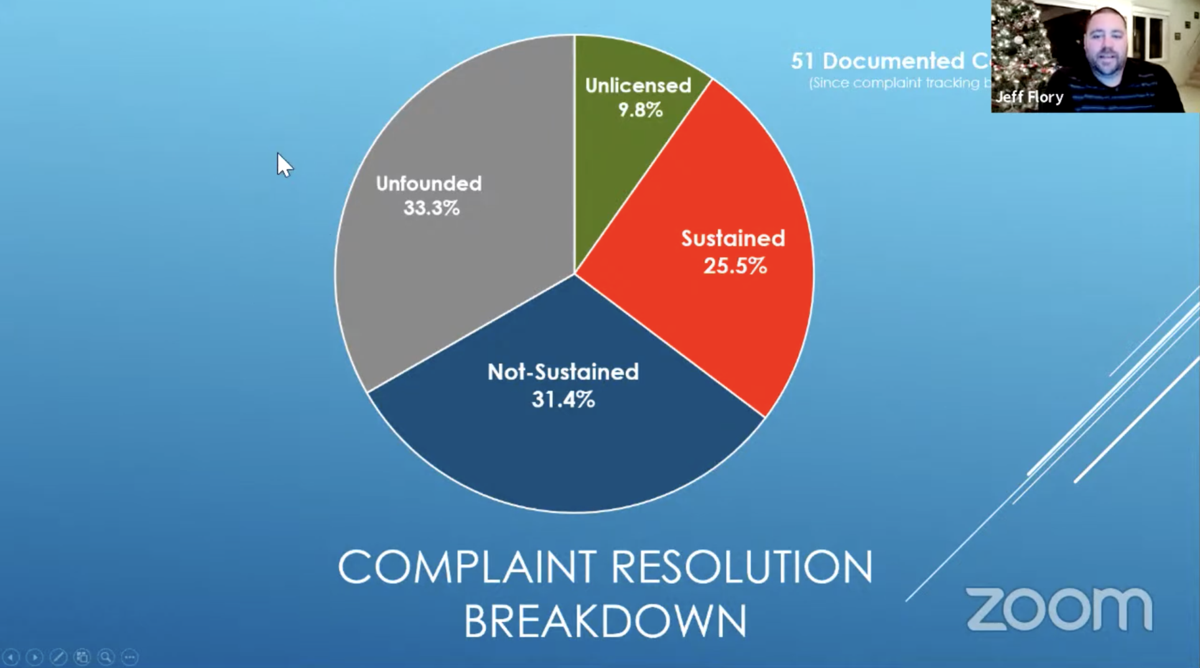 Code enforcement officer Jeff Flory presents a breakdown of complaints and how they are managed.

Code enforcement officer Jeff Flory presents a breakdown of complaints and how they are managed.

While Mayor Jay Barber and others applauded Jeff Flory’s work as the city’s code compliance officer handing vacation rentals, a group of vacation rental homeowners were not as enthusiastic.

Flory’s presentation to the City Council in December reviewed his first six months in office, addressing the backlog of inspections, developing local contacts with homeowners and managing vacation rental complaints. He provided a complaint/resolution breakdown and introduced software to monitor compliance.

“We really wanted to establish a line of communication from the city to VRD owners, property managers and Seaside residents,” Flory said. “To me, it was being accessible and having that line open.”

“From the whole City Council, bravo,” Barber told Flory. “Amazing work in the first six months of your tenure. Thank you, Jeff, for a great report.”

In 2019, the City Council voted unanimously to raise annual permit fees for the city’s 425 vacation rentals. The fee added $400 per year to all permit costs, to fund a compliance officer, designed to inspect vacation rentals and enforce local codes related to items like noise, litter and parking.

But while Barber and council members applauded his efforts, more than 100 vacation rental homeowners were left cold. They say their burden is way out of proportion.

“If you take any other business in the city of Seaside, they’re not being targeted like we are,” Mike Meyer, a co-organizer of the 100-member Seaside Vacation Rental Owners Association, said after the meeting. “We’re an easy target, an easy mark with no voting rights, and no voice. I want to be part of the community, but I feel like I’m an outsider and I’m not a part of it.”

A single rental of his, he said, contributed almost $7,200 in lodging tax revenue to the city in 2020 in addition to more than $9,500 in property taxes and the permit fee cost.

Property owner Darren Karr blasted the permit increase in a letter to the council this month.

“You’ve raised taxes, changed rules, added rules, and quintupled our business fee without so much as one single word being said to us,” Karr wrote. “I’ve been renting my house in Seaside for 12 years and you guys have never, not even once reached out to me unless it was with an open hand, and a gun at my head.”

Local contacts, property managers and property owners are given an opportunity to respond to every complaint on their vacation rental, he said.

“I wanted to make sure to document what their responses were and what they are doing to resolve any neighborhood issues that may result from the operation of their VRD,” Flory said.

Flory said he wants to make a vacation rental contact list as accessible as possible to the public with 24-hour access for the public via the city’s web page.

City Councilor Steve Wright joined others impressed by the results.

“We’ve had a lot of complaints by a subset of the vacation homeowners, and hopefully by the end of the night you’ll show them what their money is going for,” Wright said.

After the meeting, some homeowners said the position of code compliance officer doesn’t justify even being close to full time, if at all.

Joe Foss, a co-organizer of the vacation rental owners association, said the city hasn’t followed up on their concerns since they last went before the City Council.

“It’s a ridiculous nightmare that they have created there and there is not sufficient justification,” Foss said. “If you look at the numbers he presented, 33% of them were basically unjustified and another 30% of them we’re basically already handled by the property manager. So 60% of those 51 didn’t even require his input at all. And no, we have not had additional contact with the mayor or City Council officials.”

Barber said fees will be reviewed in coming months after the city assesses expenses.

“That’s still to be reviewed and we’ll be doing that,” he said.

In the meantime, property owners say they will continue to pay their permit fees in a timely manner.

“Paying or not paying is not really an option,” Meyer said. “If you look at our bill, it says anything paid after Feb. 1 faces a 50% penalty. Me, I don’t want to take a chance on having to pay another $275 on top of the $550 business license fee on three rentals.”