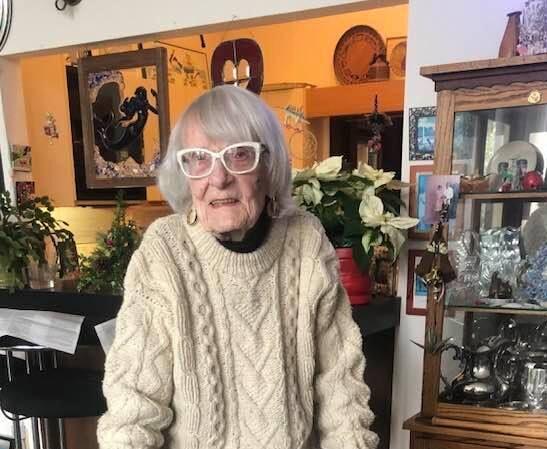 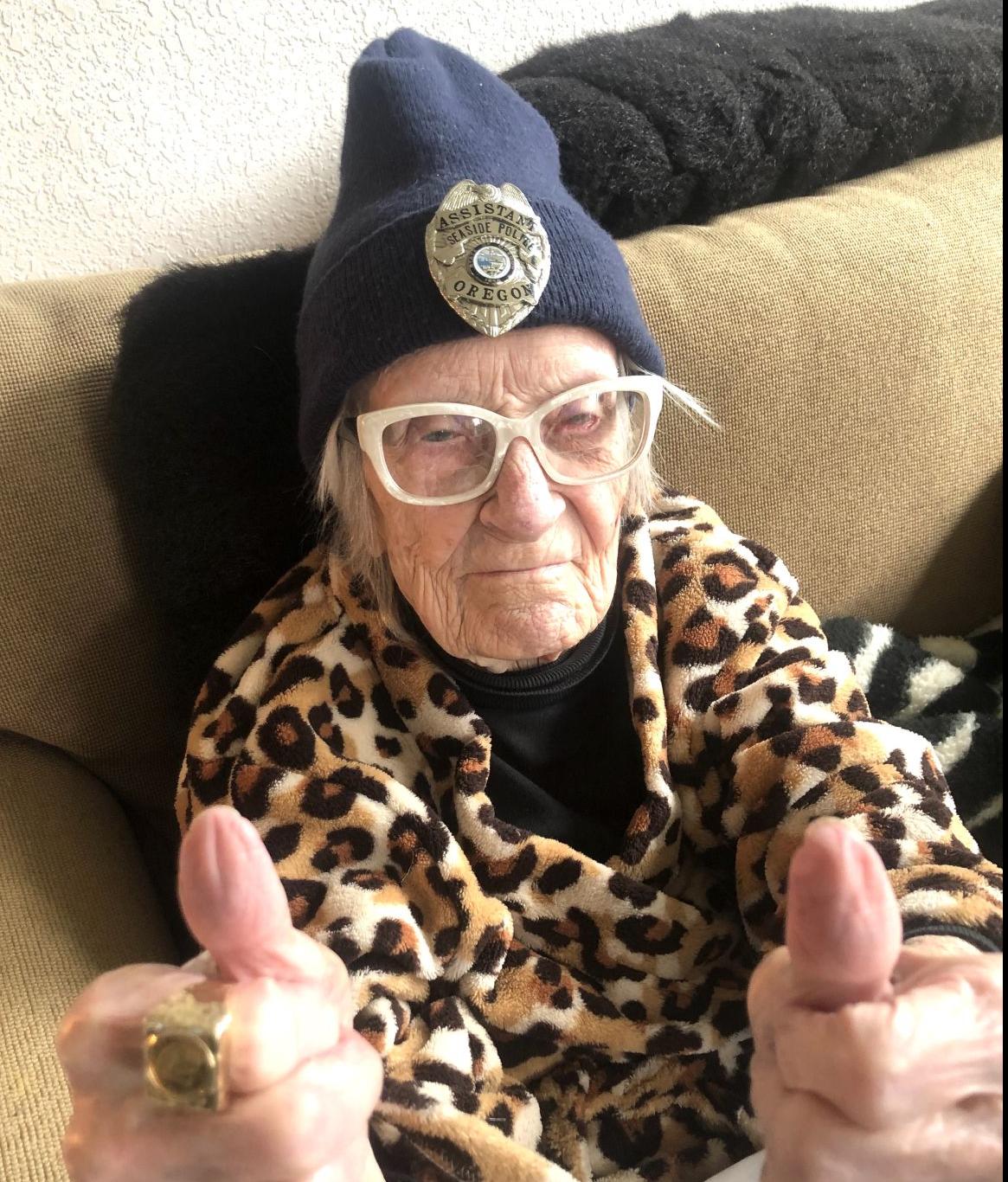 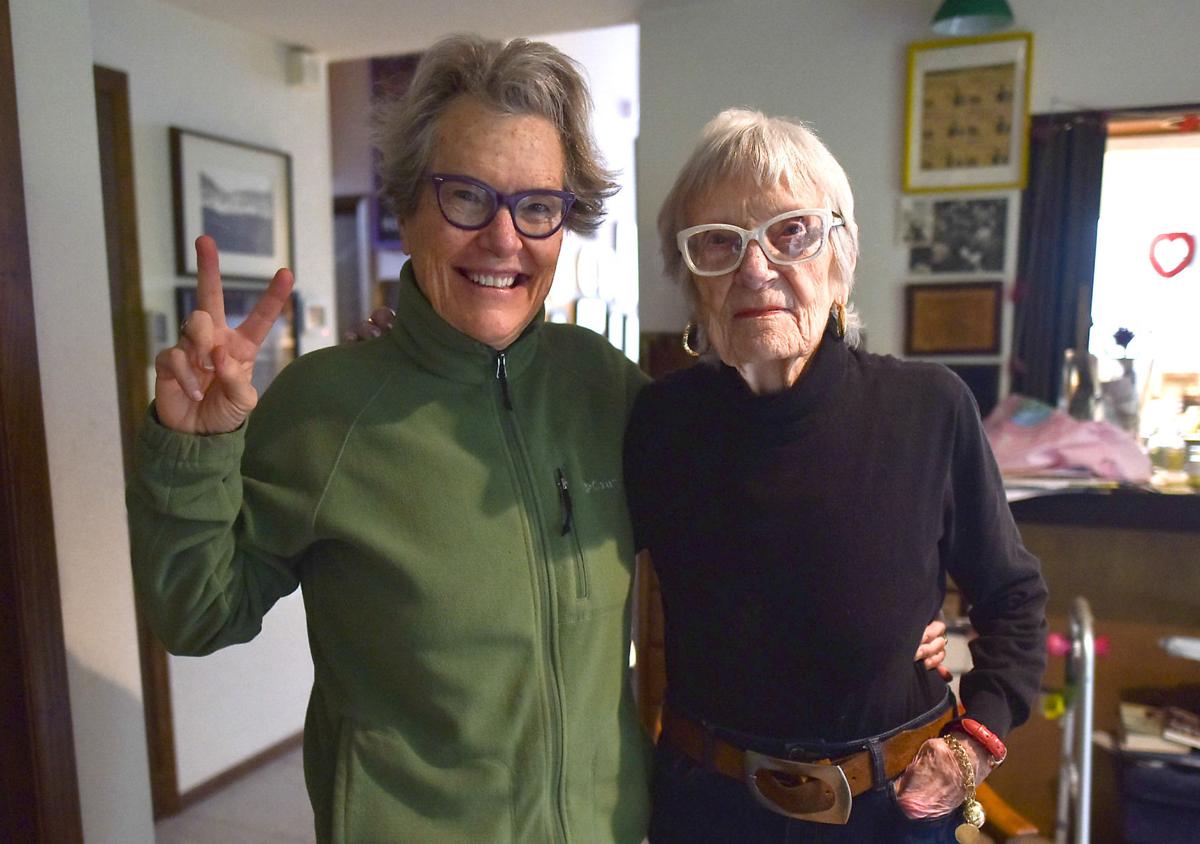 Marion Blake, right, with her daughter, Mary Blake, at home in Seaside in 2018.

Marion Blake, right, with her daughter, Mary Blake, at her home in Seaside in 2018.

Marion Blake, right, with her daughter, Mary Blake, at home in Seaside in 2018.

Marion Blake, right, with her daughter, Mary Blake, at her home in Seaside in 2018.

Marion Blake, one of Seaside’s oldest residents, died Saturday at 102 peacefully at home.

“A force of nature,” is how her daughter, Mary Blake, described her. “As she was getting older around her century mark, she was constantly asked, ‘To what do you attribute your longevity?’ Good genes, red wine, dark chocolate, being with the one you love, great friends, play and have fun!”

Marion was born April 29, 1918, in Denver, Colorado. She was 13 when her mother died from a heart condition at age 42. Her father, a pharmacist, raised her and her much older brother, Stanley.

She attended college at Colorado State University in Fort Collins, where she met and “married the big man on campus,” Walter Pershing Blake, a veterinary student and football, basketball and track athlete.

They married in 1941, the day after Walter Blake graduated from Colorado State. He taught veterinary medicine and surgery at the University of Missouri, and then the couple moved to Phoenix, Arizona, where he had a small animal clinic. Marion worked in the practice with her husband as surgical assistant and girl Friday.

Moving to Seaside to be closer to family, sheadjusted to circumstances after the loss of her husband and two daughters. She found a happy home with her daughter Mary, living an active lifestyle well in her 90s and beyond.

“Marion Blake was an avid golfer, before age caught up with her,” Chelsea Gorrow wrote in a 2014 profile in The Daily Astorian. “She now uses a cane with four feet to get around. But that’s the only visible sign that she’s 96 years old. The petite and fit woman wears glittery nail polish, stylish white-framed glasses, pink lipstick and gold jewelry, including a beautiful bangle bracelet and fashionable rings.”

At 100, she did stretching exercises every day, and weighed the same as she did in college. Her busy schedule included duplicate bridge at the Astoria Golf & Country Club, at the Bob Chisholm Community Center once a week and twice a week in Astoria at the senior center. She continued to sip an occasional dry “martooni,” which, she said in an interview with the Seaside Signal two months before her 100th birthday, “was good for partying.”

Marion loved football and cheered for the Denver Broncos. She watched Rachel Maddow and Stephen Colbert. She went to bed at 1 a.m. and woke up at “6 or 7 ... I don’t waste a lot of time sleeping too much,” she said.

Last year she professed a desire to be a police detective, and the Seaside Police Department drove up to make her a dream come true with an honorary badge.

Marion lamented that she was “always the oldest one in the crowd,” and said she had no regrets over the years. At age 100 her goal was to “just play more bridge and kick butt.”

She achieved a wish of living her last years at home. “Heaven forbid assisted living!” she said. “You know, there are a lot of old people there.”

Marion regretted that the coronavirus pandemic reduced her bridge-playing and was “heartbroken” by the U.S. Capitol insurrection on Jan. 6.

“She did feel that after the (Biden) inauguration we would make our way back to a more truthful and connected society,” Mary Blake said. “She was especially excited to see the first woman of color become the vice president.”

She wants her mother’s message of positivity to survive her. “There wasn’t a day that went by that we didn’t thank our lucky stars that we had each other’s company. We were at home safe, healthy and blessed all the way to the end. Mudder watched as her generation was so vulnerable and that they went through such an unimaginable lonely and painful crossing, without family holding each other close and heart to heart.

“She would always sign off with ‘Happy trails to you,’” she added. “‘Aloha, xoxo — moi.’ Please, always remember to love your mother.”