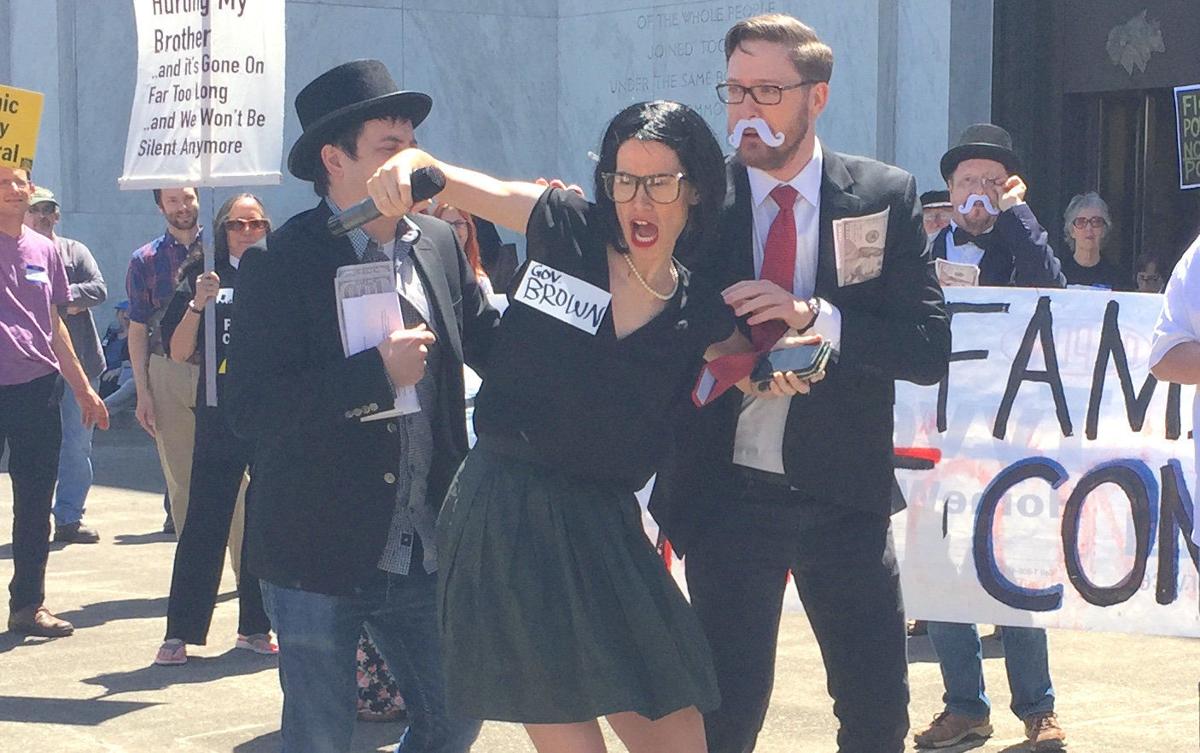 Sheena Sisk of northeast Portland, a member of the Democratic Socialists of America, plays Gov. Kate Brown in a skit during a demonstration against the governor's legislation to expand a business tax break during a special legislative session in Salem Monday. This scene depicts monied special interests capturing Brown. 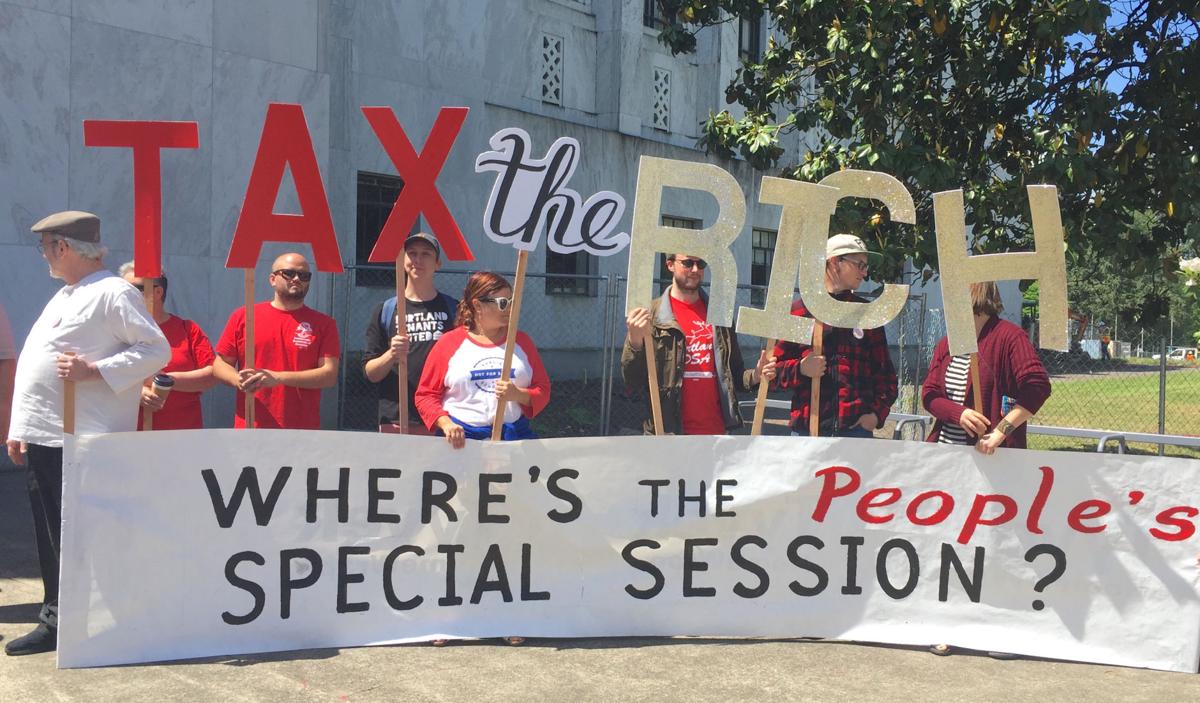 Members of the Oregon Poor People's Campaign and the Democratic Socialists of America demonstrate against Gov. Kate Brown's legislation to expand a business tax break during a special legislative session in Salem Monday.

Sheena Sisk of northeast Portland, a member of the Democratic Socialists of America, plays Gov. Kate Brown in a skit during a demonstration against the governor's legislation to expand a business tax break during a special legislative session in Salem Monday. This scene depicts monied special interests capturing Brown.

Members of the Oregon Poor People's Campaign and the Democratic Socialists of America demonstrate against Gov. Kate Brown's legislation to expand a business tax break during a special legislative session in Salem Monday.

SALEM — Gov. Kate Brown on Monday got her wish to expand an existing business tax break that will cost the state $11.3 million in 2018.

During Monday’s eight-hour special session, the state House voted 51-8 and the Senate voted 18-12 to pass the tax break for certain sole proprietorships via House Bill 4301.

“It was really clear in general, that Republicans wanted more — more tax breaks for small businesses,” Brown said. “The Democrats wanted different or more revenue-neutral proposals. We weren’t able to reach a compromise in those conversations so we went with my very simple straightforward proposal that would ensure tax fairness for our businesses.”

Brown, a Democrat who is seeking re-election this year, called the special session after signing another tax bill — Senate Bill 1528 — in April that was unpopular with some members of the business community. That law eliminated a 20-percent business tax deduction that was included in federal tax reform and would have resulted in the loss of $200 million to $300 million in state revenue. Oregon’s tax code automatically conforms with federal code unless lawmakers specifically pass legislation to change it.

The governor said while she was considering Senate Bill 1528, she realized that state lawmakers needed to expand the state’s lower tax rate for “pass-through” businesses to sole proprietors.

Expanding the tax break will cost about $11.3 million in 2018, $11.8 million in 2019 and $12.5 million in 2020. The cost continues to increase each subsequent year, said Chris Allanach, acting legislative revenue officer.

Many House Republicans criticized the governor’s decision to sign Senate Bill 1528 into law and to call a special session on an issue that isn’t an emergency.

“I think we can all agree that this is an emergency manufactured by the governor,” said state Rep. Knute Buehler, R-Bend, who is challenging Brown in the governor’s race this year.

“This bill only deals with an omission from the 2013 law that will make it fairer for the businesses that choose to organize as sole (proprietors),” Barnhart said.

About 100 demonstrators affiliated with the Democratic Socialists of America and the Poor People’s Campaign converged on the Oregon Capitol steps just after noon Monday to protest the expansion of the business tax break.

“We reject this special session and everything it stands for — a choice to increase the wealth and the comfort of the few at the top at the expense of those struggling at the bottom,” said Olivia Katbi-Smith, co-chairwoman of the Portland chapter of Democratic Socialists of America. “It’s not time to give tax breaks to the rich; it’s time to tax the rich and invest in our communities and fully fund our state.”

In 2013, lawmakers approved a lower tax rate for some “pass-through” businesses, including S-corporations, limited liability corporations and partnerships with certain amounts of employment hours and income of up to $5 million per year. At that time, sole proprietors were excluded. The governor’s bill changed that.

Sen. Mark Hass, D-Beaverton, a member of the Joint Committee on Sole Proprietors, expressed reservations about the move to expand the current policy. He voted “no” on the bill because, he said, the effects of the existing policy are not yet known and still need to be analyzed, after more time has passed and there is more data to gauge its effectiveness.

“I think that’s been our problem in the last couple of years, and we’ve attempted to fiddle with this, is nobody can say for sure whether it’s freeing up capital or creating jobs or anything else,” Hass said, “And so until we have a definitive study or analysis on this it’s hard for me to support expanding it.”

Rep. David Gomberg, D-Central Coast, and other lawmakers had proposed several changes to make the tax break revenue neutral and to focus on helping small businesses, but none of those amendments were voted on before the legislation was moved to the floor for a vote.

Gomberg had proposed amending the bill to reduce the income cap to be eligible for the tax break from $5 million to $750,000. Reducing the eligibility cap by that amount would make the expansion of the tax break largely revenue neutral, meaning it wouldn’t have cost anything, Allanach said.

Gomberg’s amendment also would have reduced the requirement that businesses have at least one employee working 1,200 hours a year to 1,000 hours per year.

It would have eliminated the mandatory 30-hour minimum work week to qualify for the break. The 30-hour requirement excludes seasonal businesses, Gomberg said.

By opening the tax break to seasonal businesses and reducing the income cap, the expansion of the tax break would have targeted “mom and pop” businesses with lower profit margins, without cutting into state revenues, he said.

In discussions with the Governor’s Office about his proposal, “there was no real resistance to it, but we’re in a time bind,” Gomberg said.

The session corresponded with the beginning of the Legislature’s quarterly committee meetings in Salem, which are scheduled through Wednesday.

The Capital Bureau is a collaboration between EO Media Group and Pamplin Media Group.

Bash questions DeVos: Why do you not have guidance?