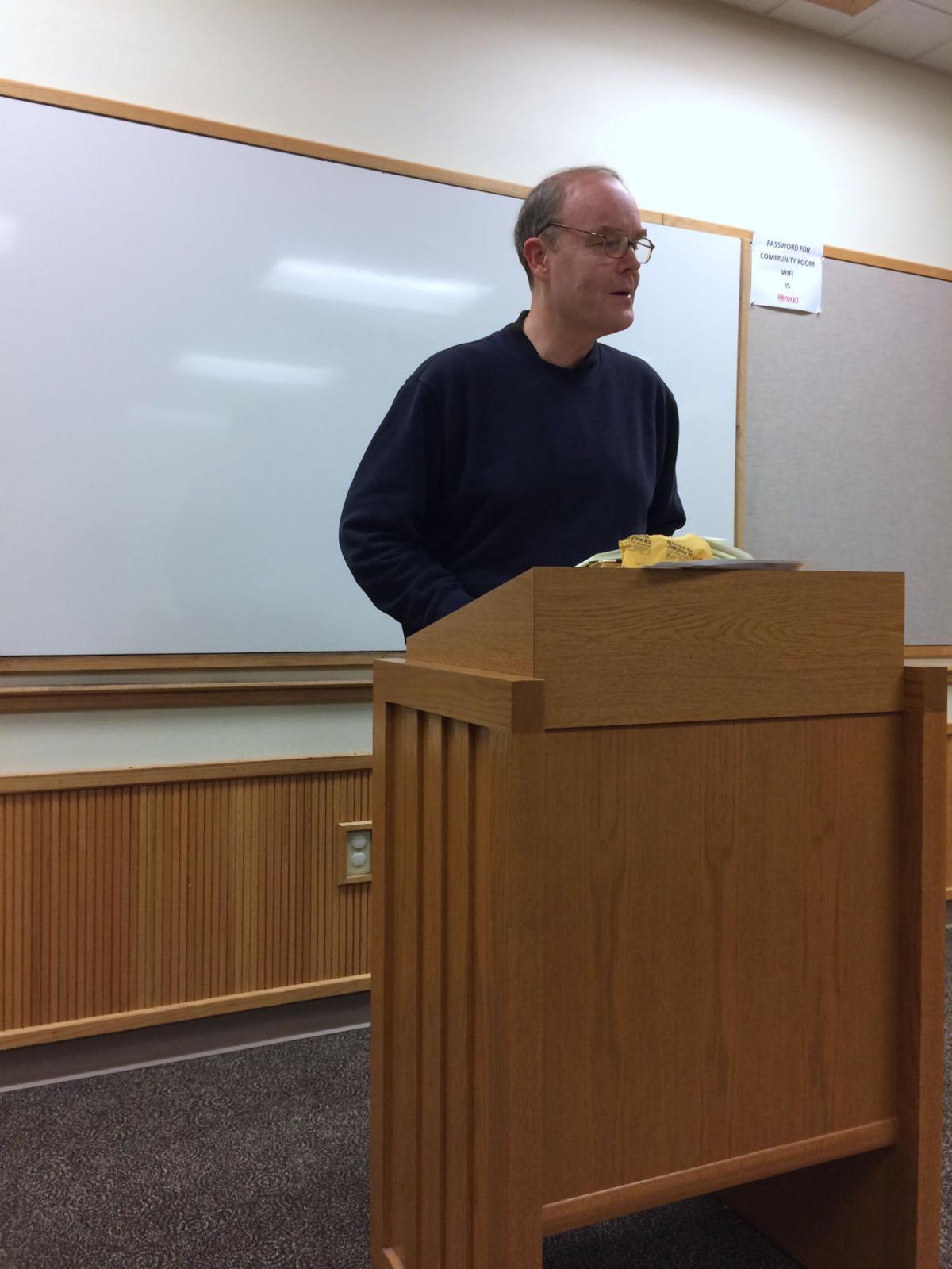 Author and biographer Christopher Sandford talks about historical moments that took place in his book “Union Jack: John F. Kennedy's Special Relationship with Great Britain,” at a reading at the Seaside Public Library. 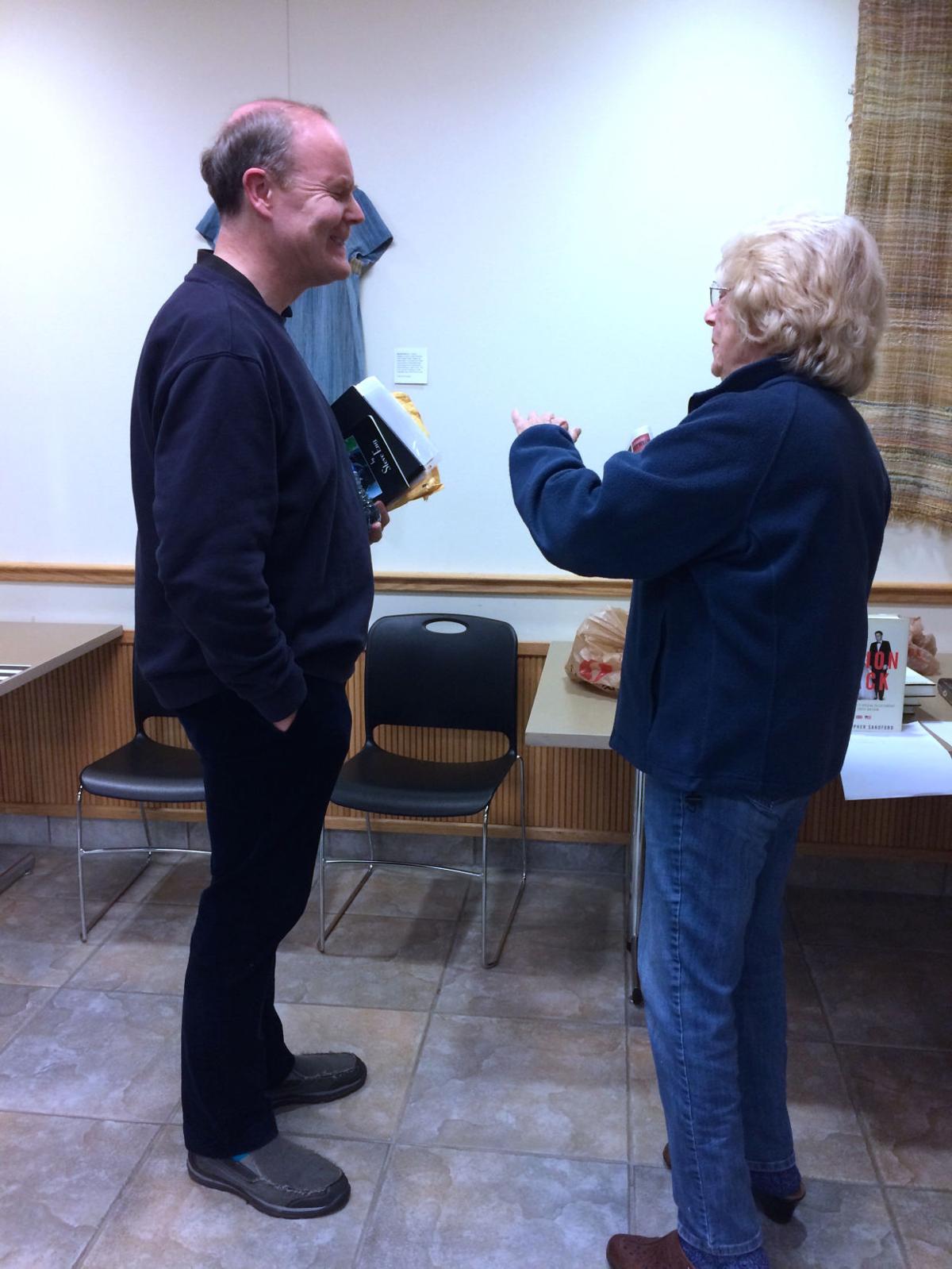 Author and biographer Christopher Sandford with attendee Nancy Holmes, discussing books and other interesting tales from the reading Oct. 19 at the Seaside Public Library. 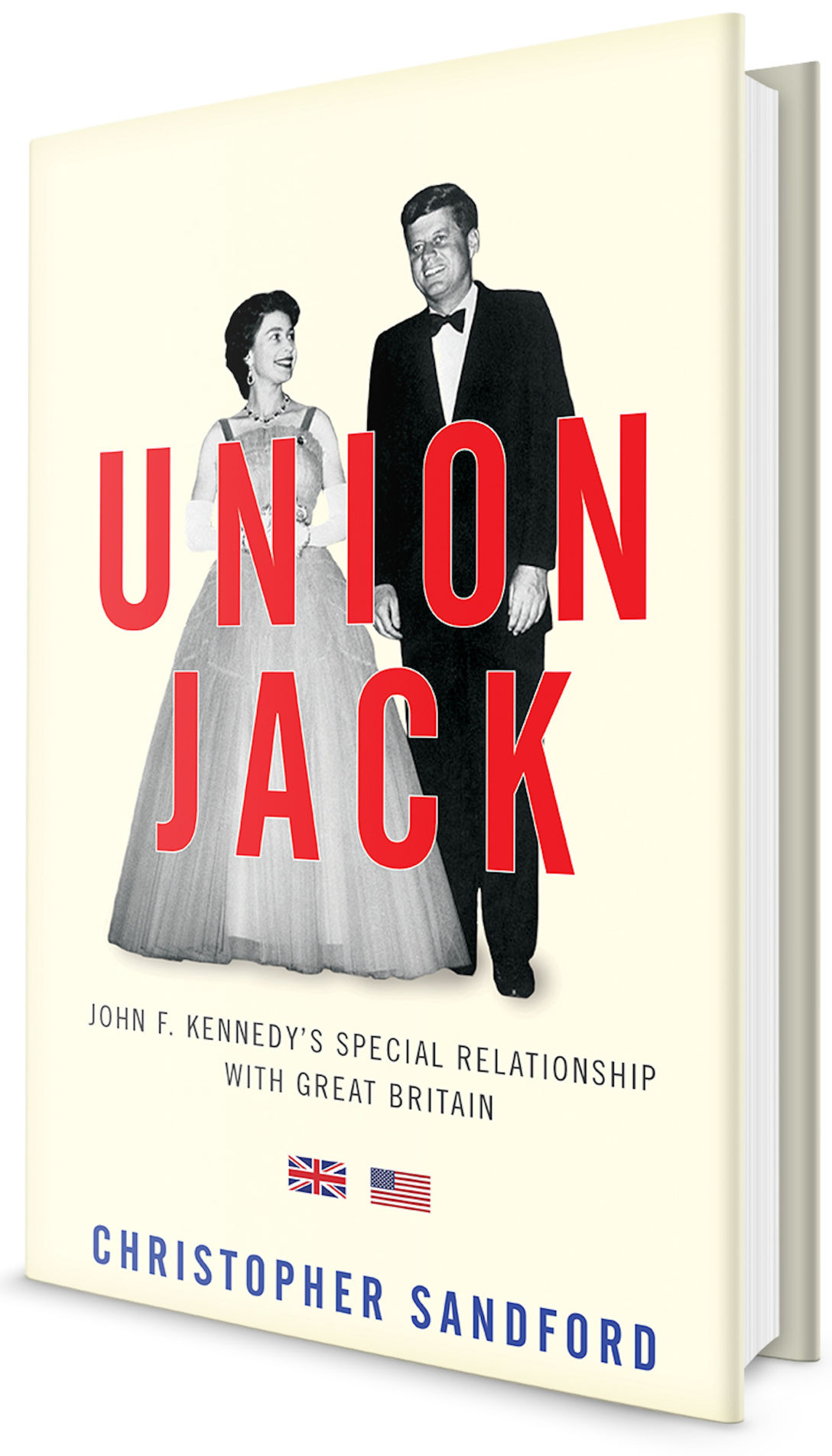 Author and biographer Christopher Sandford talks about historical moments that took place in his book “Union Jack: John F. Kennedy's Special Relationship with Great Britain,” at a reading at the Seaside Public Library.

Author and biographer Christopher Sandford with attendee Nancy Holmes, discussing books and other interesting tales from the reading Oct. 19 at the Seaside Public Library.

A stormy night might have persuaded some fans to stay home, but for those who braved the elements, it was worth stopping by Seaside’s library and listen to author Christopher Sandford’s account of the relationship between President John F. Kennedy and the country of Great Britain: its queen, prime ministers, British aristocracy and the friends he made along the way.

“It’s really the story of Kennedy’s relationship, not so much with the Queen herself, but with Great Britain over many years,” Sandford said. A fascination that began when Kennedy first traveled to Britain as a teenager, he added, explaining the emphasis of his book.

It is through these relationships Kennedy formed and the events he witnessed at a young age that shaped him into the man and politician he became, separating him from the myth that emerged out of his traumatic death.

“It was a love affair, in many ways, that sustained for many years. And like any love affair, it had its ups and downs,” Sandford said. Kennedy was 17 the first time he visited Britain. The last time was not long before his assassination in 1963.

During a trip to London when Kennedy was 22, he heard Prime Minister Neville Chamberlain declare war on Germany while sitting in the House of Commons, Sandford said. “It was ironic and poignant that as Great Britain on Sept. 3, 1939, declared war on Germany, the young John Kennedy was present when it happened by virtue of the fact that his father Joe Kennedy was then ambassador to the United Kingdom.”

Significant, not only for Kennedy witnessing this historical moment in European and world history, but also as an interesting aftermath with what happened only a few days later. Sandford asserts this was the real start of Kennedy’s political career that took place not in Boston or Washington D.C., but in an obscure hotel in Scotland.

Kennedy’s personal disress at the outbreak of war began as hectic and life-changing experiences took place. A false air raid had the Kennedy family crouched in the basement of a women’s dress shop with other frightened individuals. Five hours later, the passenger liner SS Athenia was torpedoed by a German U-boat and sank off the coast of Scotland — 128 lives were lost.

“John F. Kennedy’s political career began, in effect, three days later when he was sent post haste to Glasgow to meet with the American survivors of the disaster,” Sandford said. Kennedy was sent because no regular member of his father’s staff could be spared.

While Kennedy met with 150 bloodied and bruised Athenia survivors in the Beresford Hotel to discuss their transport to America, none, according to Sandford, gave Kennedy an easy time, despite his good manners and charm. He patiently explained to the survivors that President Franklin Roosevelt had personally assured their safe passage and the United States government guaranteed no American ships would be attacked. The survivors were not impressed.

Kennedy realized the concerns of the survivors were not a priority of the U.S. Embassy, or of his father, culminating to the first power struggle between the two. As Sandford described, “JFK to his great credit at age 22, stood up to his father and said ‘I looked these people in the eye dad and we need to look after them’.” Eventually a ship was procured and the survivors made it to America.

After Harold Macmillan became prime minister in 1957, he provided loyal support to Kennedy during his presidency. While in office, the two leaders exchanged formal messages that led to a steady flow of personal correspondence.

They dealt with many challenges together. Their shared time in office experienced such threats as the Cuban missile crisis, Suez crisis, Berlin Wall, Bay of Pigs, Vietnam War and Laos.

Laos was a conflict that faced Kennedy during the Vietnam years. He asked Macmillan’s opinion, who replied with one word, “don’t” — “don’t go there,” he urged.

Macmillan, too, asked President Kennedy’s advise when seeking to fill the role of British Ambassador to the U.S. Kennedy replied, “I like David,” referring to David Ormsby Gore, who was a childhood friend and close confident of Kennedy.

During the 13 active days of the Cuban missile crisis, Kennedy would phone Macmillan almost nightly and have casual conversations, even when neither knew if the world was going to end.

Their relationship was, Sandford said, on one level extremely benign and on the other extraordinary when considering the circumstances in which these nightly phone calls took place. “I personally think we are very lucky that we had those two individuals in charge of the Western alliance at that particular time.”

In a five page handwritten letter Ormsby Gore wrote to Kennedy in October 1962, he presumably congratulated Kennedy for his handling of the missile crisis. He ended the letter by saying, “…I mean it quite sincerely when I say that both the United States and all the world must feel a deep sense of gratitude that you were our president at this particular moment in history. I and countless millions are deeply in your debt. Well done.”

According to Sandford, Kennedy kept this testimonial from his friend in his desk for the remainder of his life.