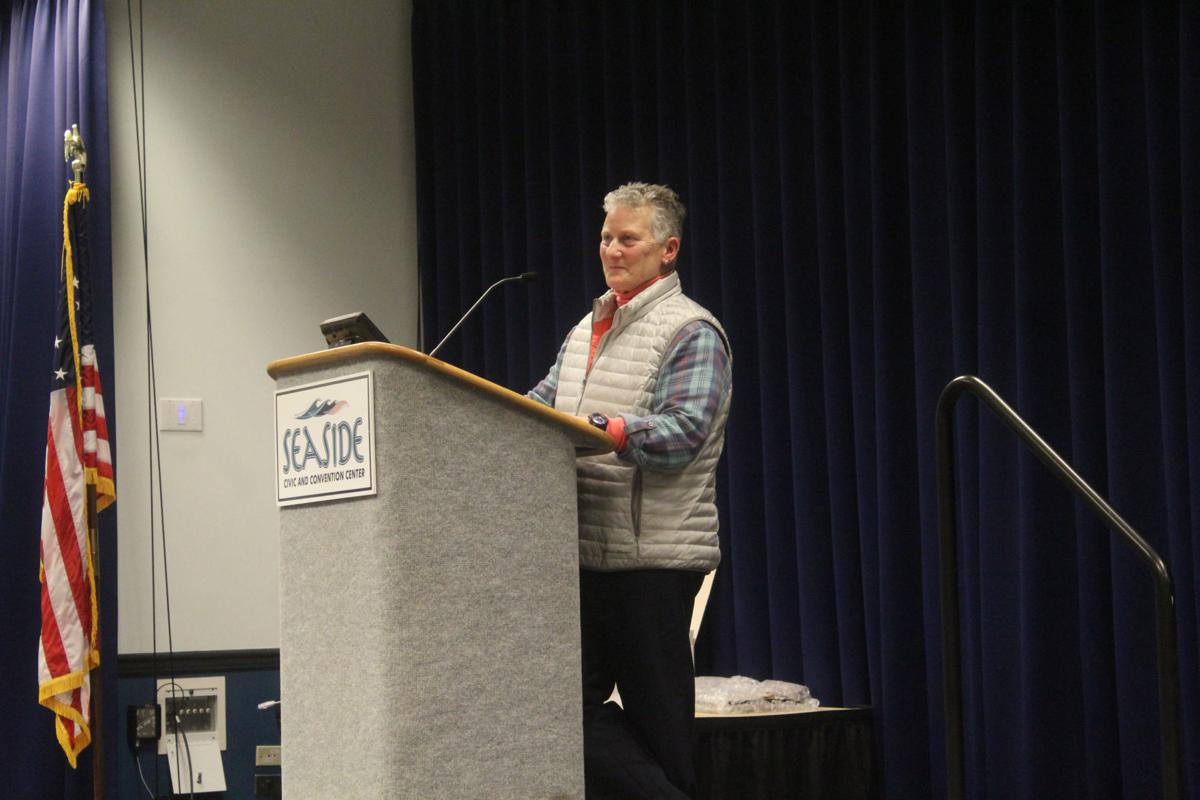 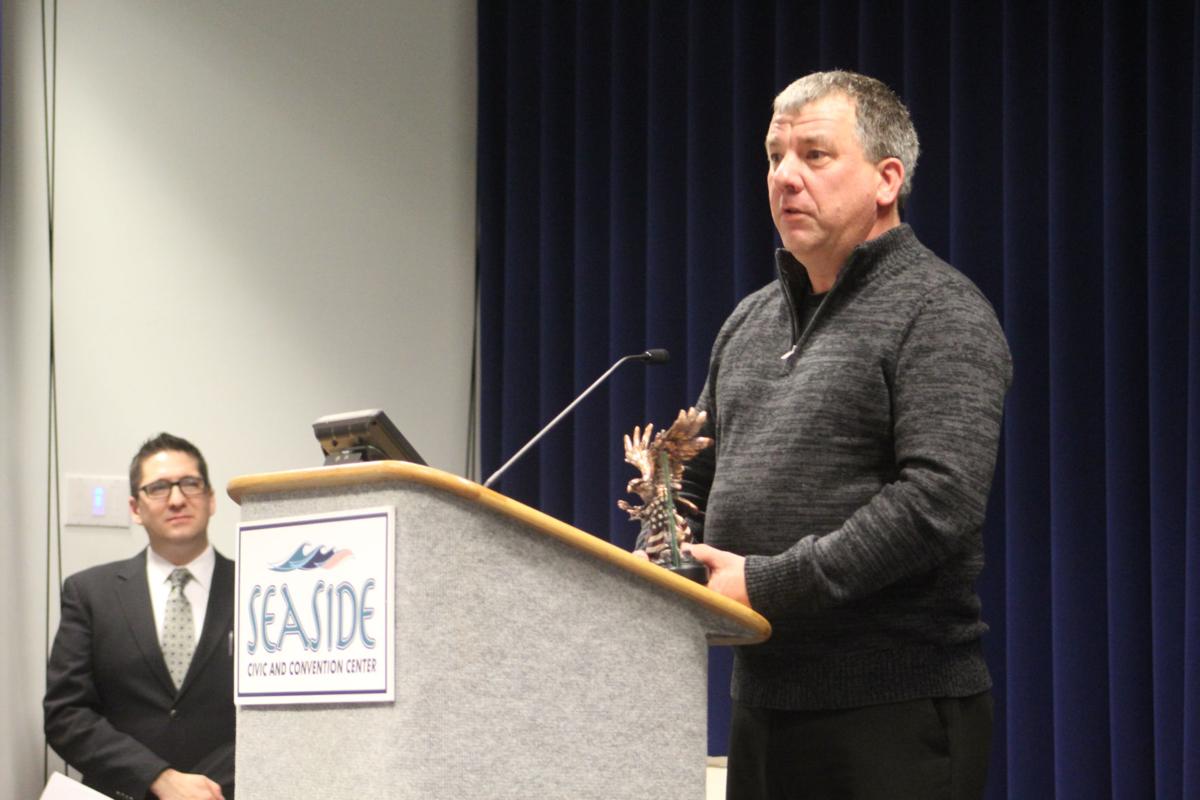 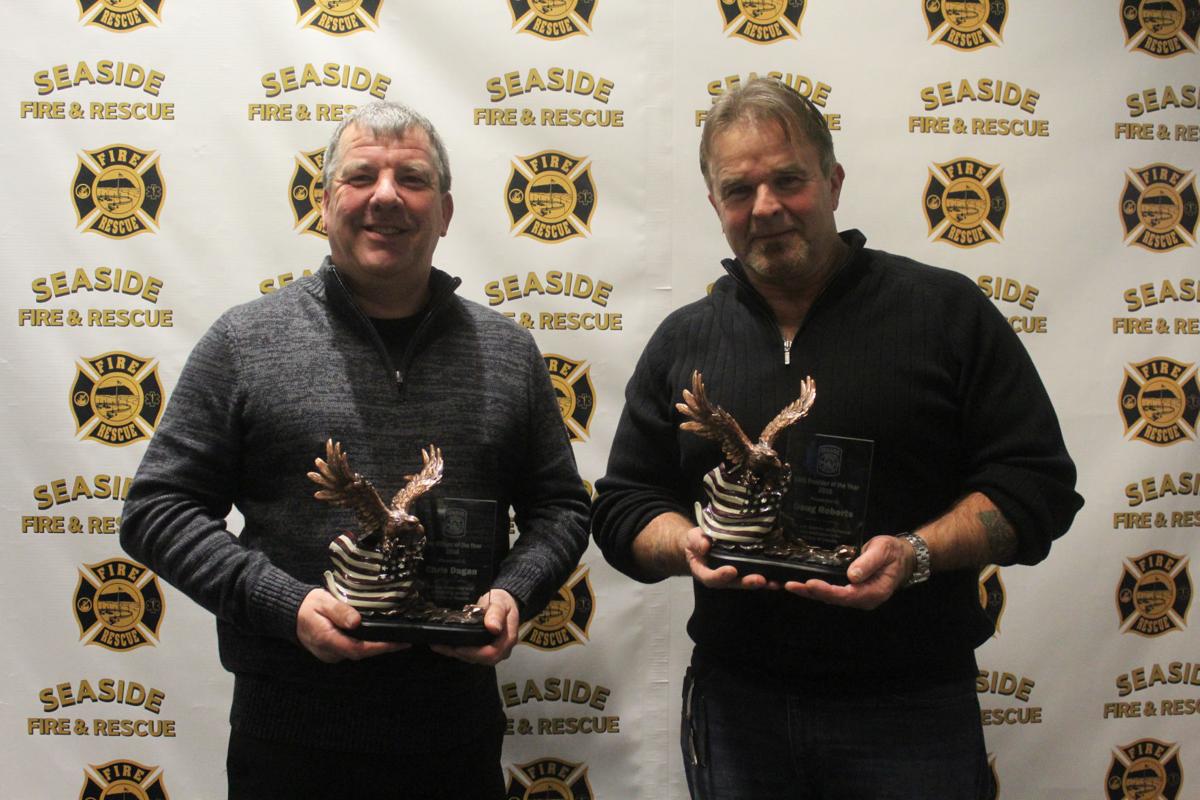 Lt. Jeramy Houston, the chairman for the Banquet Committee, has volunteered with Seaside Fire & Rescue for about 15 years. 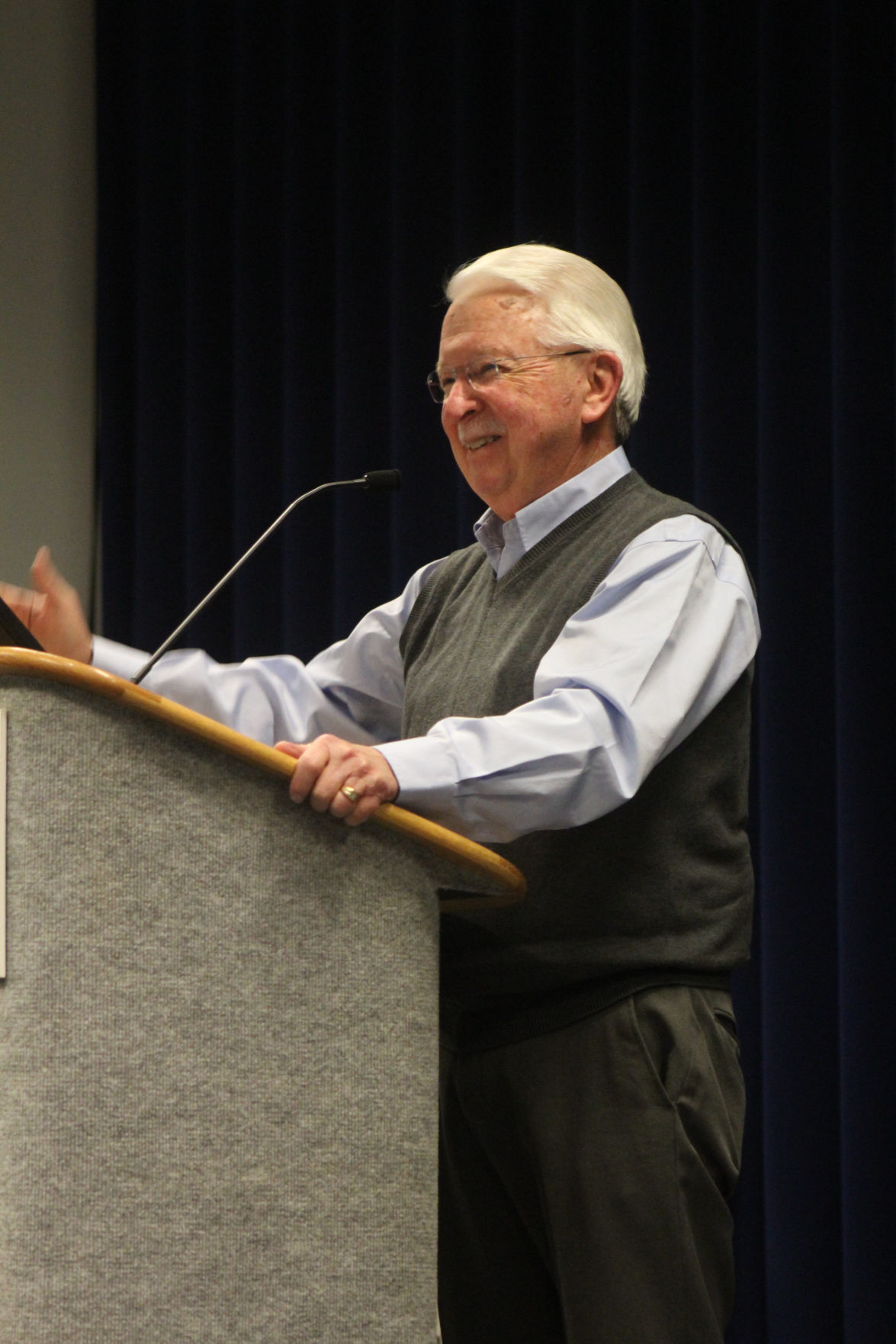 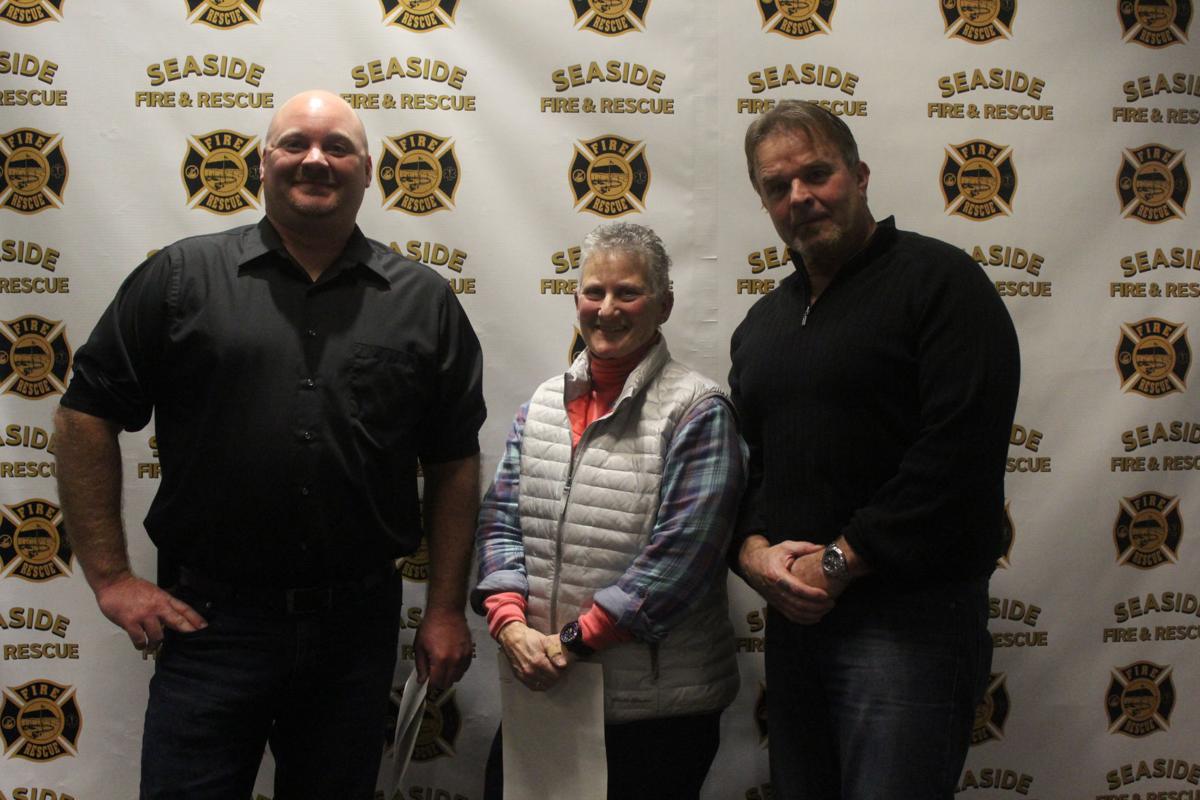 Seaside Fire & Rescue members Kyle Mergel (from left), Katie Bulletset and Doug Roberts were three of the top five in terms of drills attended during 2016. Not pictured are Cesar Alcala and Roy Dague, who also were in the top five. 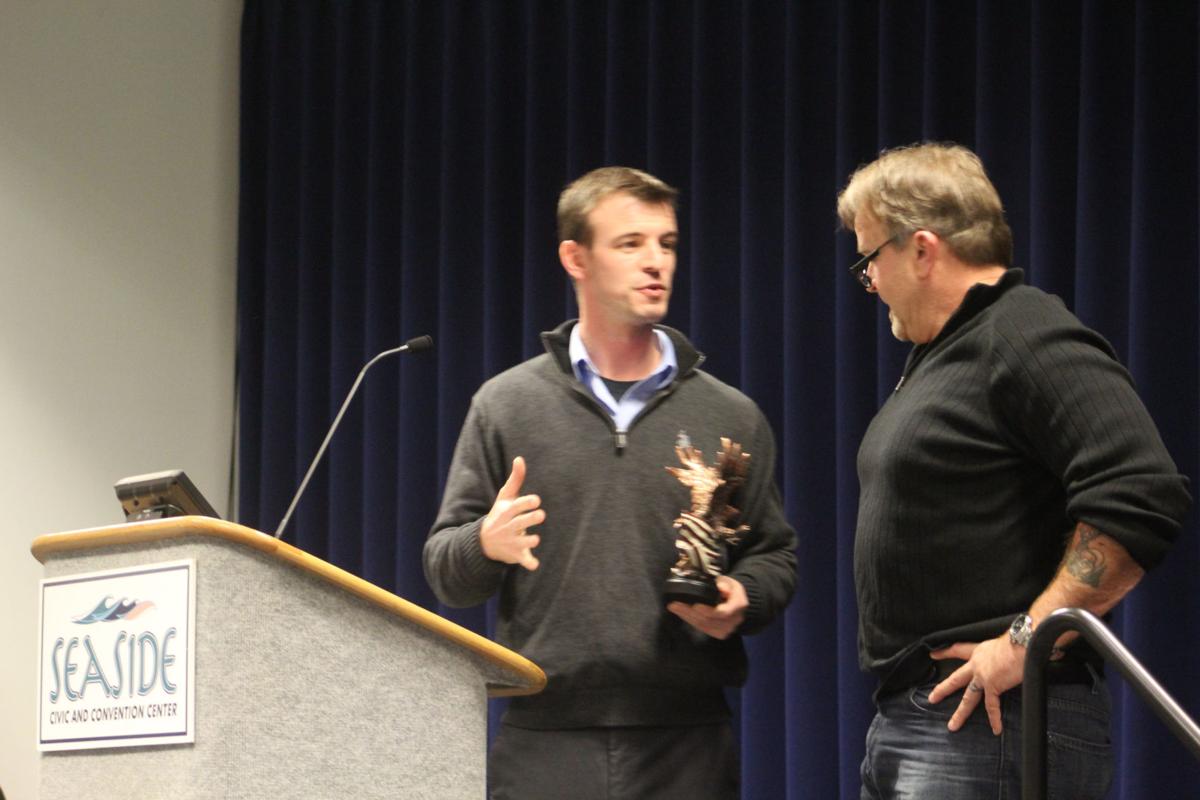 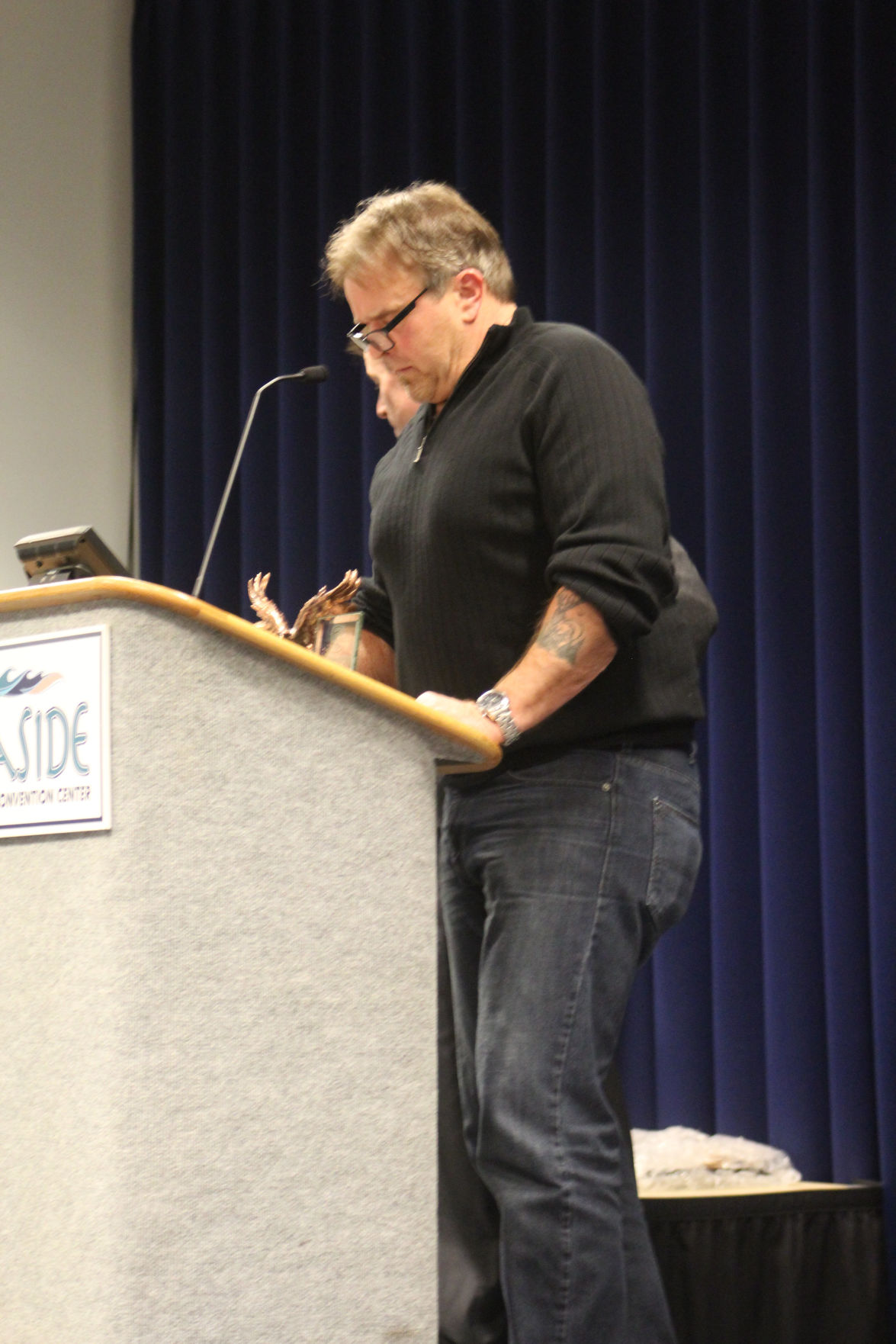 Doug Roberts gives an acceptance speech after being awarded EMS Provider of the Year during the Seaside Fire and Rescue Awards Banquet held Jan. 14. 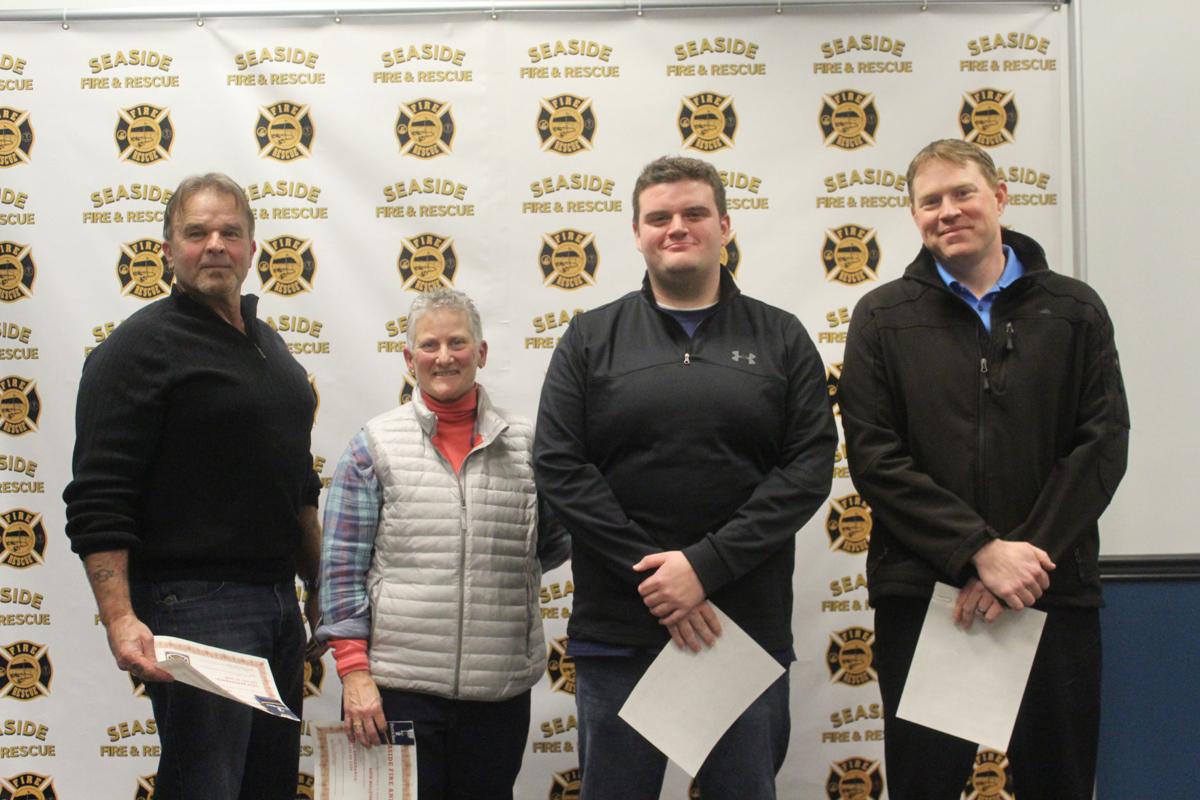 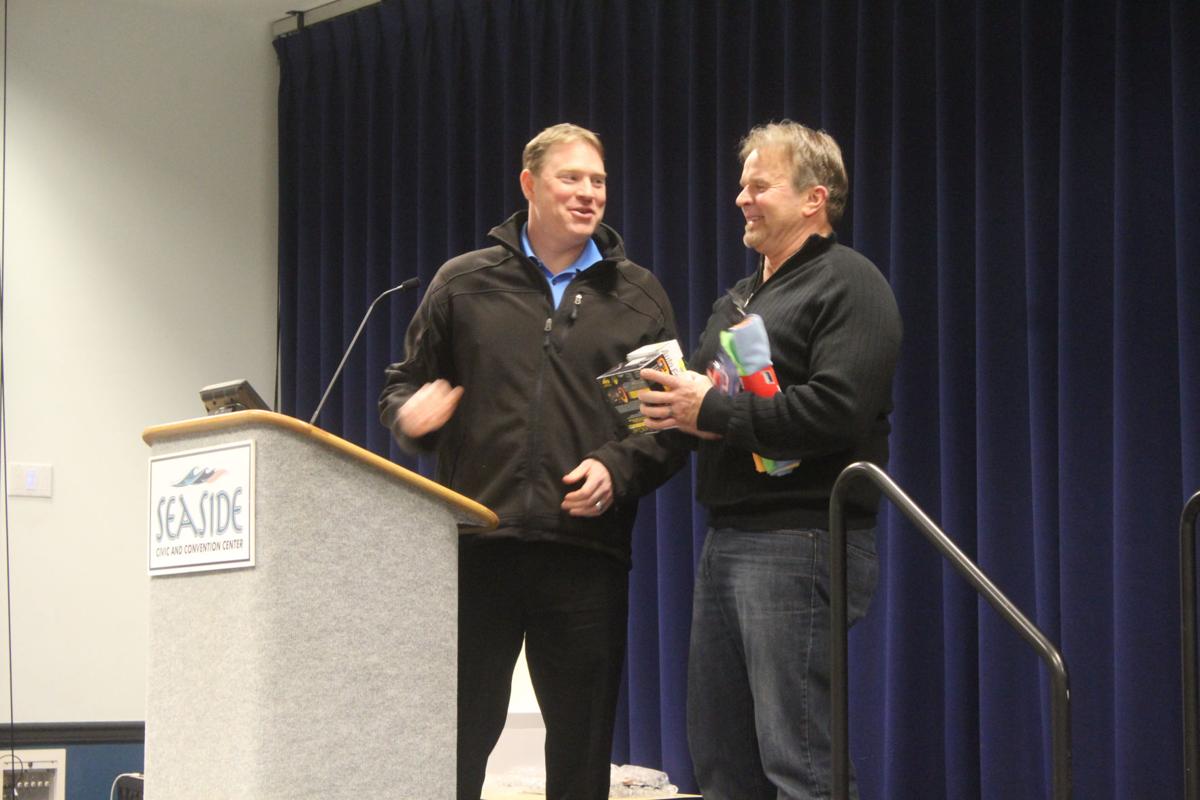 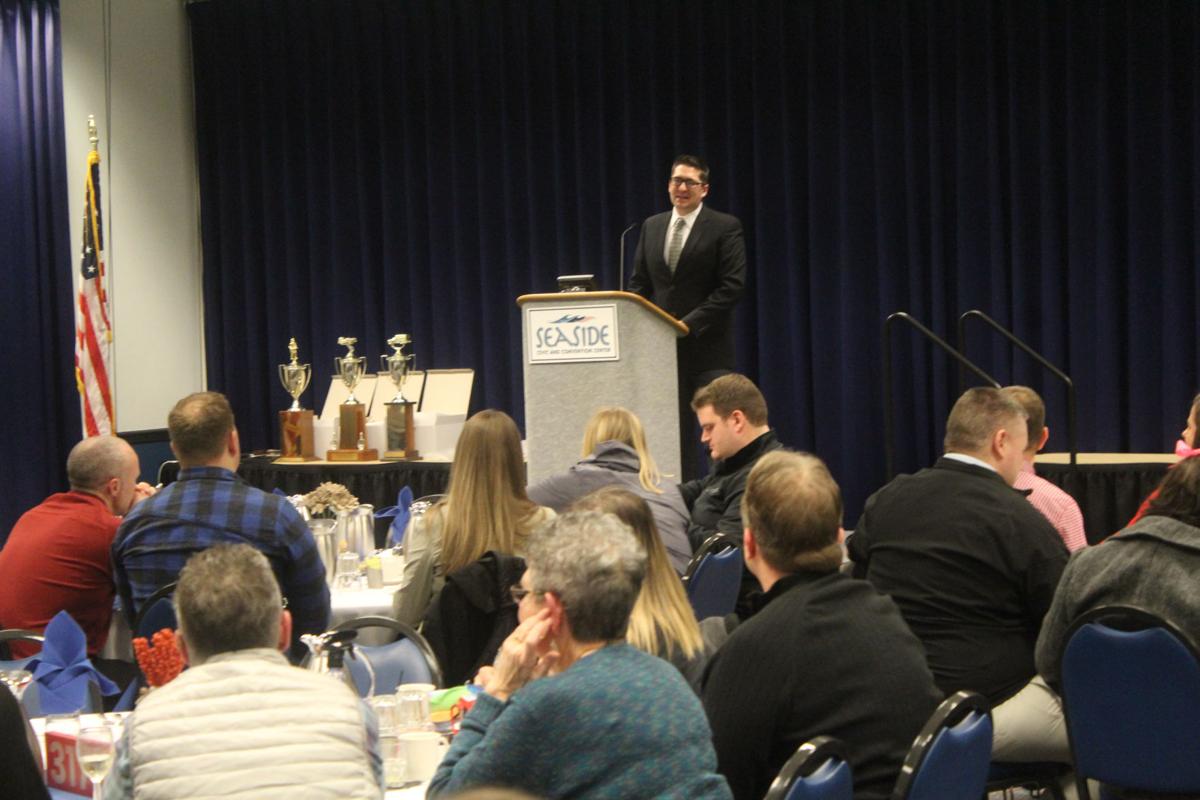 Lt. Jeramy Houston, the chairperson for the Banquet Committee, has volunteered with Seaside Fire and Rescue for about 15 years. 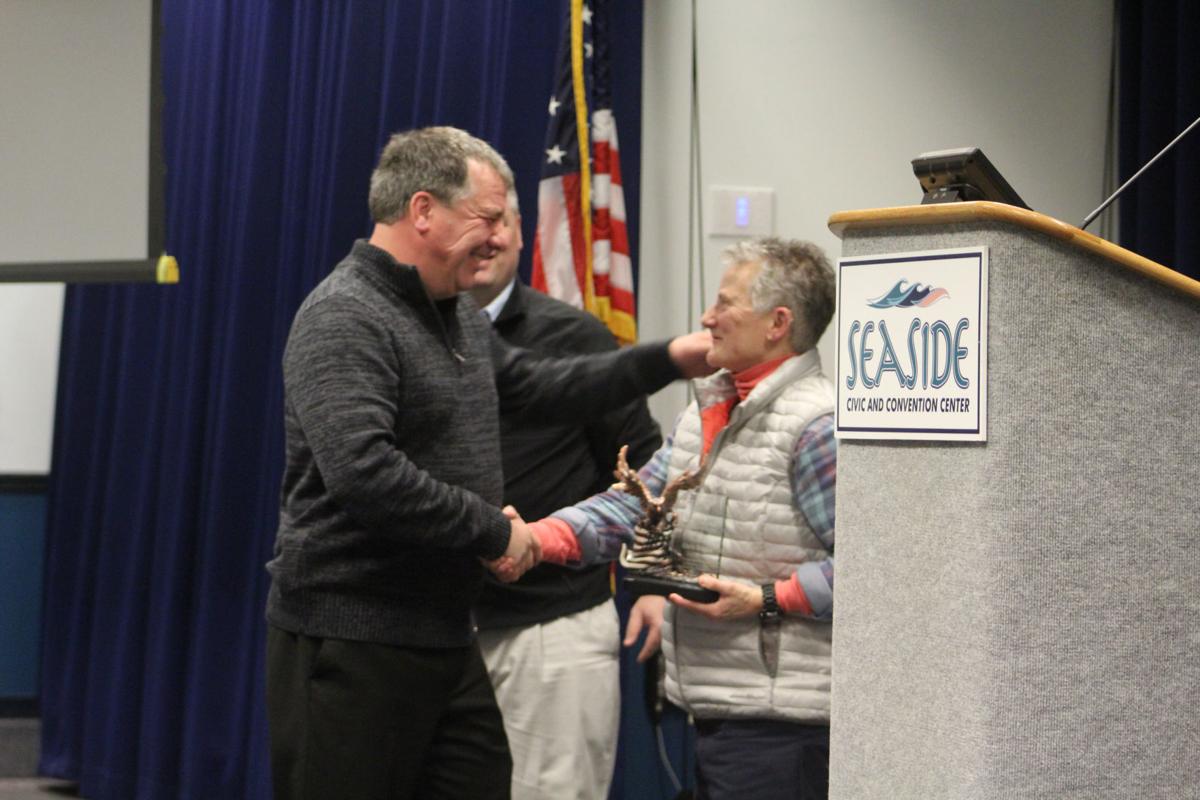 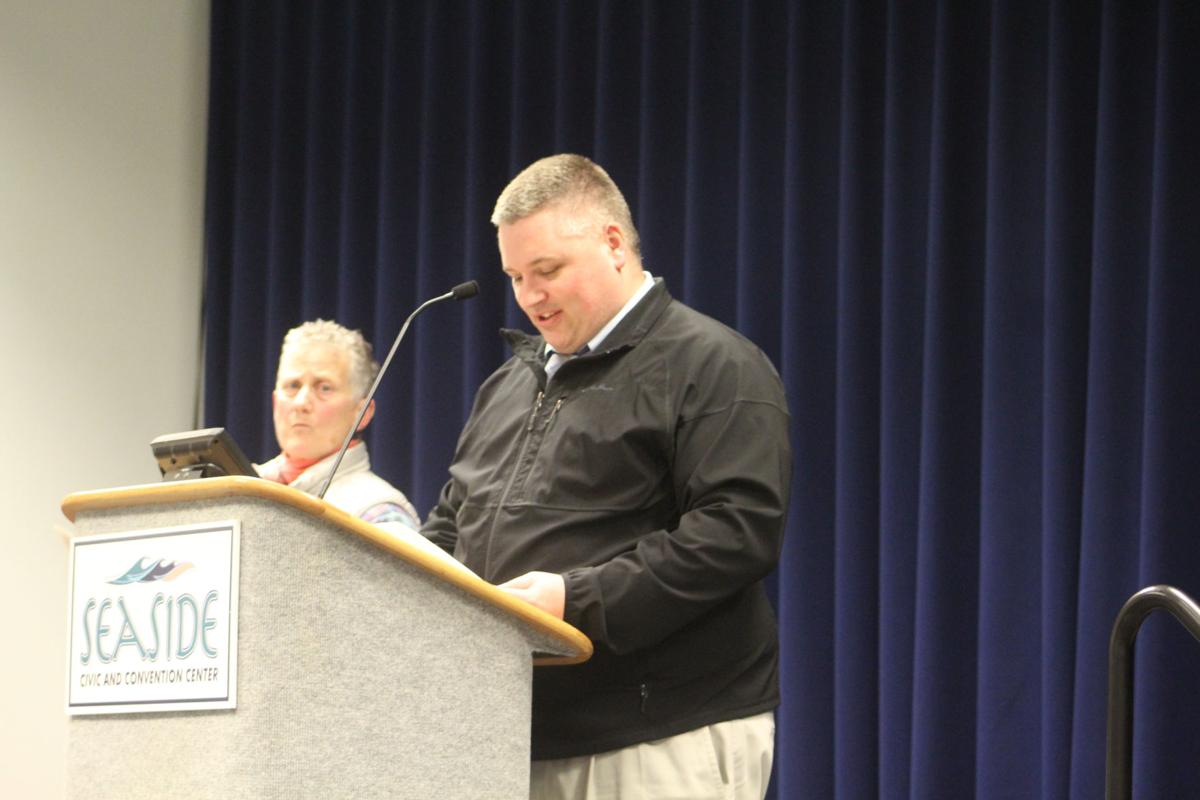 Lt. Jeramy Houston, the chairman for the Banquet Committee, has volunteered with Seaside Fire & Rescue for about 15 years.

Seaside Fire & Rescue members Kyle Mergel (from left), Katie Bulletset and Doug Roberts were three of the top five in terms of drills attended during 2016. Not pictured are Cesar Alcala and Roy Dague, who also were in the top five.

Doug Roberts gives an acceptance speech after being awarded EMS Provider of the Year during the Seaside Fire and Rescue Awards Banquet held Jan. 14.

Lt. Jeramy Houston, the chairperson for the Banquet Committee, has volunteered with Seaside Fire and Rescue for about 15 years.

Without the dedication and efforts of Seaside Fire and Rescue’s volunteers, the department would not be capable of providing the same quantity and quality of fire service to the community on the city’s budget that it currently does.

“I think the average citizen in Seaside has no idea of the level of commitment each of you have made to make fire service in Seaside what it is,” said Mayor Jay Barber during the annual Seaside Fire and Rescue Awards Banquet held Jan. 14. “You’re not just volunteers. You’re volunteer firepersons who have been trained and who are adequate for the challenges that come up.”

In 2016, the department responded to a record 1,329 calls and held drills on a weekly basis. In addition, the Seaside Fire and Rescue Association participated in numerous fundraising and community service activities, including providing support and a meal to public responders who attended the memorial service for fallen Seaside Police Officer Jason Goodding in February; co-sponsoring the Seaside Safety Fair with the city of Seaside; and donating a tree for the 2016 Providence Seaside Festival of Trees that raised about $1,000.

By mid-January of this year, the department already had responded to 76 calls, compared to 46 at the same point in 2016.

“It’s looking like, if things hold true, we will be having another record year,” Association President Katie Bulletset said.

Lt. Jeramy Houston added that when started volunteering 15 years ago, the department was averaging about 500 calls per year.

“It’s just gone up and up and up since then,” Houston said.

What makes it possible for the department to achieve a high response rate is the work of volunteers. The organization runs off the effort of men and women who not only donate their time, but get the necessary training to put themselves in risky situations and succeed.

“The fire service in a community is really, I think, the core of who we are,” Barber said. “You do your work without a lot of attention or acclaim, but you do it because you’re committed to the calling to serve the community in a way no other people do in our community.”

While a prevalent spirit of volunteerism is evident in many different areas through various means in Seaside, the firefighters and medical responders provide a unique type of service.

“Most of you are risking your lives, in many cases to preserve the life and property of people you do not even know,” Barber said. “My hat is off to you. I just really want to underscore how much we appreciate what you do.”

During the banquet, a yearly tradition for the department for more than two decades, a number of department members were recognized for their accomplishments and service.

The five individuals who responded to the most calls in 2016 included Cpt. Gordon Houston, with 414 calls; Evan Edwards with 439 calls; Roy Dague with 440 calls; Bulletset with 530 calls; and Doug Roberts with 559.

Roberts also was the leader in number of drills attended, with 50 out of 51. He was followed by Bulletset and Dague with 48; Cesar Alcala with 46; and Kyle Mergel with 41.

Div. Chief David Rankin presented the EMS Provider of the Year Award. Echoing sentiments expressed by Gordon Houston during his presentation of special recognition awards, Rankin described Roberts, the winner, as “a very enthusiastic and dedicated member of our department.” Not only did he lead in call response and drill attendance, but he also obtained his EMR certification in 2015, which allowed him to contribute more in 2016.

“He’s put a lot of work and effort into this year, and he has a huge heart,” Rankin said. “I’m glad to see how far he’s come and where’s he going to go.”

In presenting the Fire Officer of the Year award to Div. Chief Chris Dugan, Bulletset relied on statistics, stating he “leads by example.” Out of the department’s 1,329 calls, Dugan responded to 688, or about 51.8 percent. Additionally, 154 of the calls took place between the hours of midnight and 7 a.m., and Dugan responded to 77, or 67 percent.

When she asked the other members to describe Dugan ahead of the event, Bulletset said, she was provided with words such as “safe,” “knowledgeable,” “noncritical,” “encouraging,” “upbeat” and “positive.”

“[Dugan] consistently has a smile and a friendly word everyone, even at 3 a.m. in the morning,” she said. “He is very popular among his fellow firefighters and also within the community.”

Finally, Daniels presented the Firefighter of the Year award to Cesar Alcala.

“It’s hard to choose out of a bunch of good firefighters and the time they can commit,” Daniels said. However, in 2016, Alcala “stood out a little higher than most.” He attended 46 drills and achieved his Firefighter I and Hazmat Operation certifications.

Another notable aspect of 2016 was the establishment of the department’s part-time work program. For several years, a part-time employee worked about 20 hours doing administrative work at the fire station. In July 2016, however, the new program went into effect.

Now, various department members, in shifts of four hours, oversee the office from 10 a.m. to 6 p.m. daily doing administrative tasks, such as data entry, rig checks, scheduling drills, taking calls and more. The program benefits the department, but also gives the members an opportunity to earn a little money while learning the inner-workings of the organization.

“Everybody that’s participating in the program is getting to learn all the behind-the-scenes stuff at the fire station that they didn’t really understand was there before,” Gordon Houston said.

Bobby Bonilla gets $1.19M every year for not playing baseball