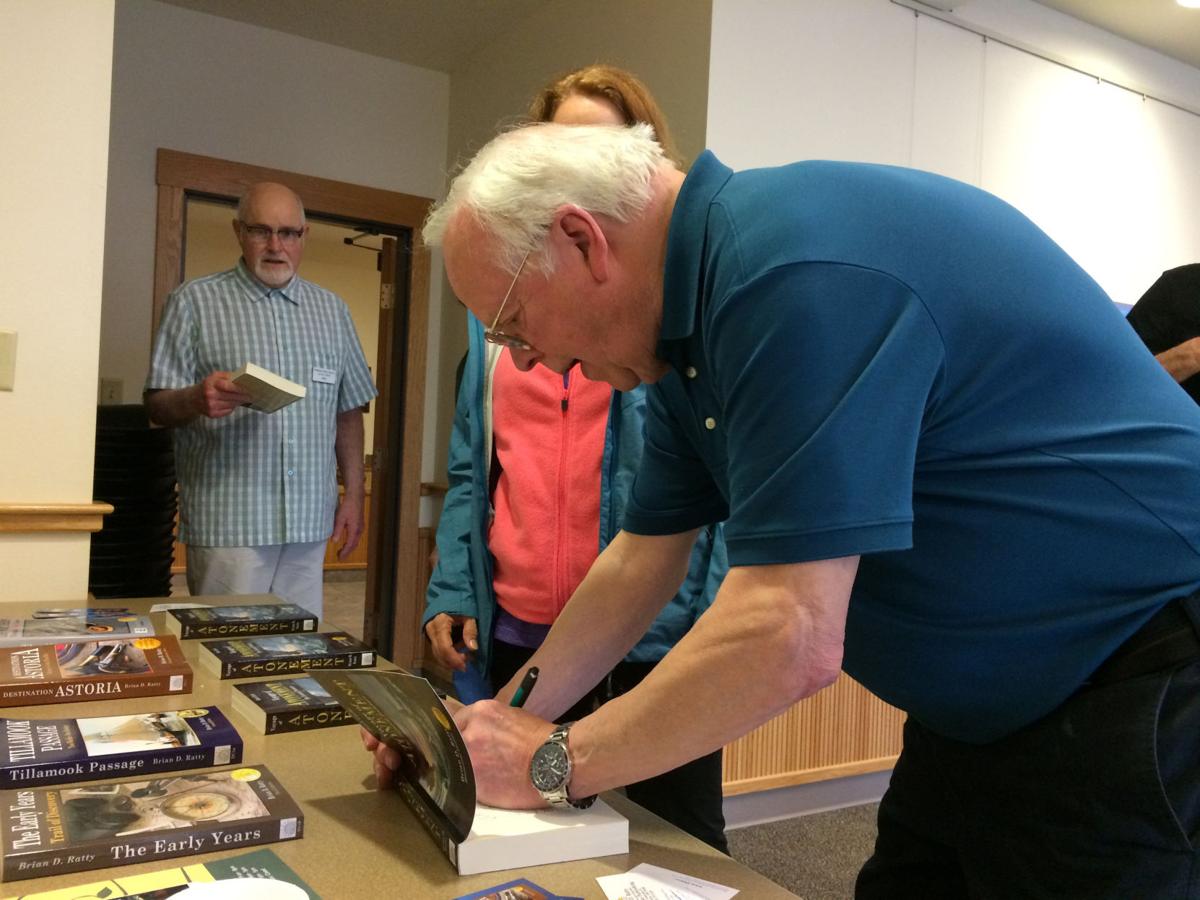 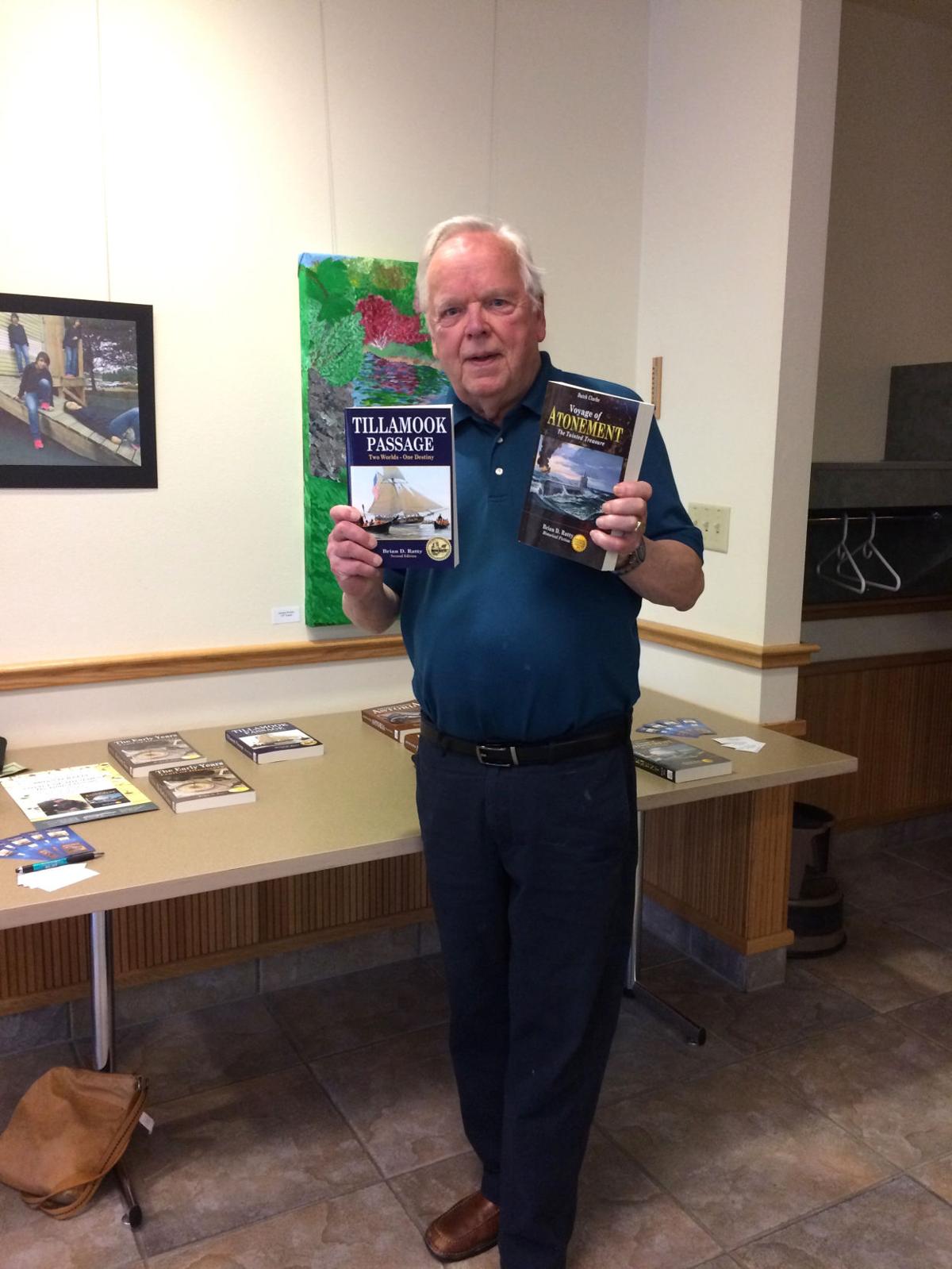 Local author Brian Ratty displays two of his five books. “Voyage of Atonement” is his latest release and the final installation of his Dutch Clarke Trilogy series.

Local author Brian Ratty displays two of his five books. “Voyage of Atonement” is his latest release and the final installation of his Dutch Clarke Trilogy series.

When history meets fiction, you get Brian Ratty. He is an award-winning author who writes adventure stories surrounded with historical backdrops. His books include “Destination Astoria,” “Tillamook Passage” and the Dutch Clarke Trilogy: “The Early Years,” a story of surviving the British Columbia wilderness in 1941; “The War Years,” a story of combat photography in the Pacific during World War II; and “Voyage of Atonement,” three stories of high sea adventure and the final installation in the trilogy.

“Voyage of Atonement” is Ratty’s latest book and one of the subjects during his presentation at the Seaside Public Library on June 1. He began with background of his early life, explained why he writes and discussed the process of historical fiction.

Ratty refers to his books as “powerful stories of our past that gave birth to our future.” He writes 90 percent historical and 10 percent fiction, and considers himself a storyteller, following the example of his favorite writer Jack London.

“I write what I like to read — historical fiction rich with bold characters and powerful story lines,” he said, adding that he believes “good historical fiction entertains and enlightens.” He says the characters within the story — real or imagined — are the glue that holds the storyline together, moving the plot forward; whereas it is the role of the events to tie the story together and provide an exciting, memorable read of history.

“This method of writing is not a genre, but a technique of storytelling that dates back to the earliest forms of verbal and written communications,” says Ratty, noting that native petroglyphs were a way of documenting some of the earliest historical fiction.

Ratty imagines his readers being surrounded by adventure; being whisked “away to another time, another place and another frame of mind,” resulting in an exciting journey through history.

The first story (1944) is about the Odessa, an organization whose sole purpose was to help Nazi members flee Europe and escape justice. The second story (1945) is about a U-boat that was used to transport Nazi gold to Argentina in preparation of creating a Fourth Reich. (Nazi gold was the wealth acquired through the plunder of the nations Germany invaded and the people the Nazis murdered.)

The third takes place in turbulent 1963, when two World War II friends sail from the Columbia River to the Pacific to begin an action-packed adventure of photographing war relics for an NBC documentary on the anniversary of the war. Both men are survivors of Japanese prison camps and suffer the scars of war. As they navigate the Pacific visiting remote islands in search of the past, they stumble across an intact U-boat filled with a cargo of Nazi gold, triggering a chain reaction of international tug-of-war.

When it comes to reviews, he is modest in his gratitude. One reviewer wrote, “‘Voyage of Atonement’ is a truly captivating piece of historical fiction. Brilliantly written and an impressive read.” Ratty replied, “As a storyteller, I never tell anybody that I ‘brilliantly’ write anything, its just part of the story. At my best, I’m only a storyteller.”

Ratty is a retired media executive and a graduate of Brooks Institute of Photography. He lives on the Oregon coast with his wife Tess and when he is not writing, he is out exploring and photographing the region.

He served in the Oregon International Guard as an aerial photo recon airman. Some of this experience can be read about in his upcoming book “Over the Next Horizon” due out this fall. It is filled with personal adventures, little tidbits and short stories.

Wildfire in southern Wyoming swells to estimated 80,000 acres, though officials expect Laramie to be safe