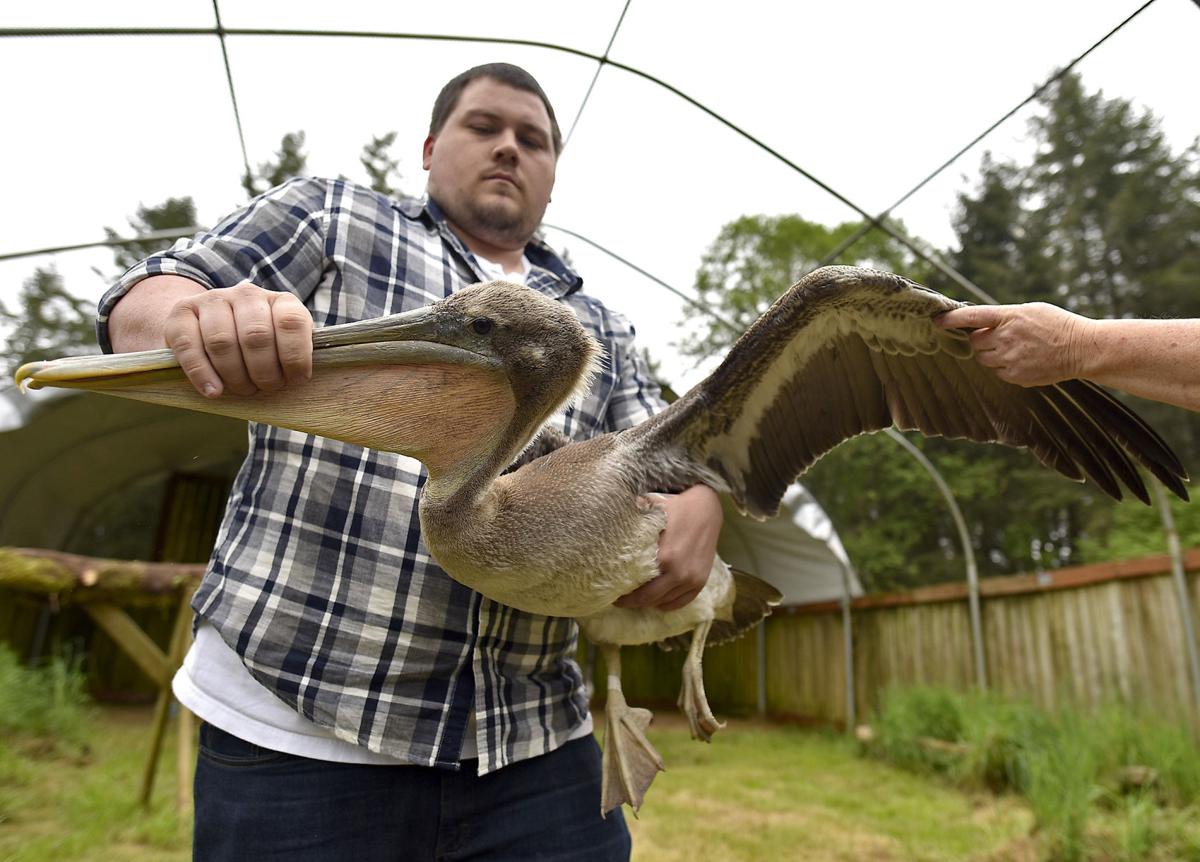 Josh Saranpaa, executive director of the Wildlife Center of the North Coast, holds a brown pelican treated at the facility. 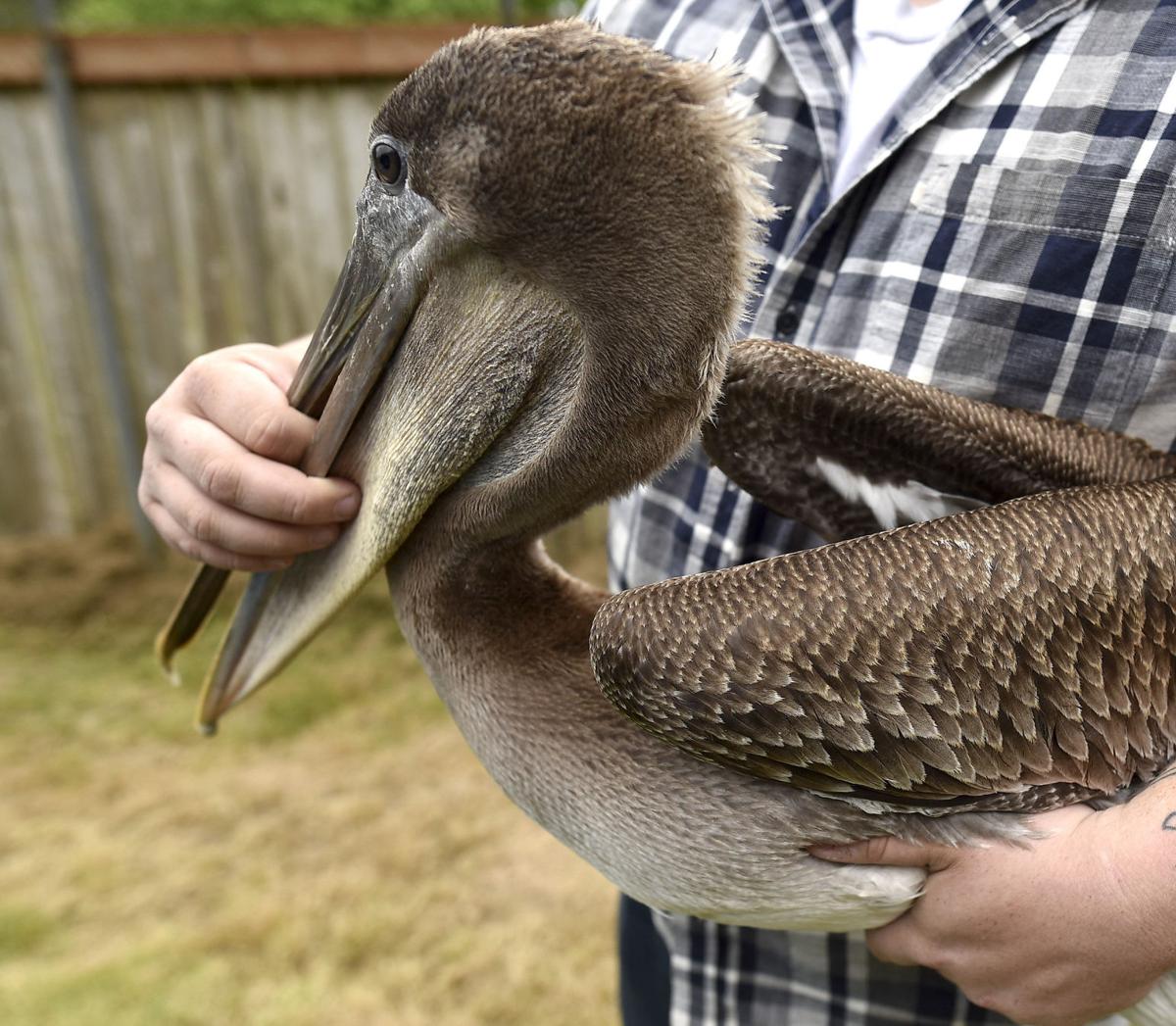 Several brown pelicans are treated at the wildlife center. 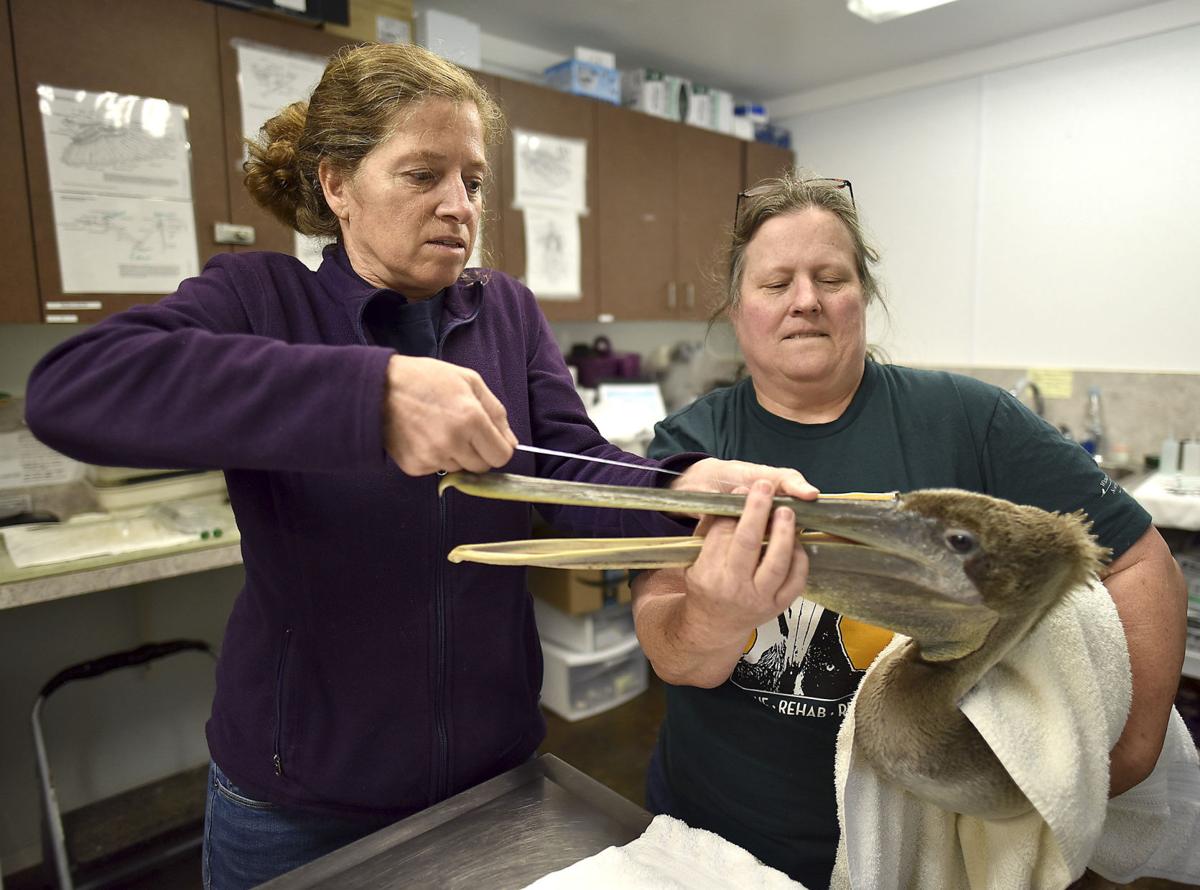 Biologist Deborah Jaques, left, and Reva Lipe take measurements of a brown pelican at the Wildlife Center of the North Coast. 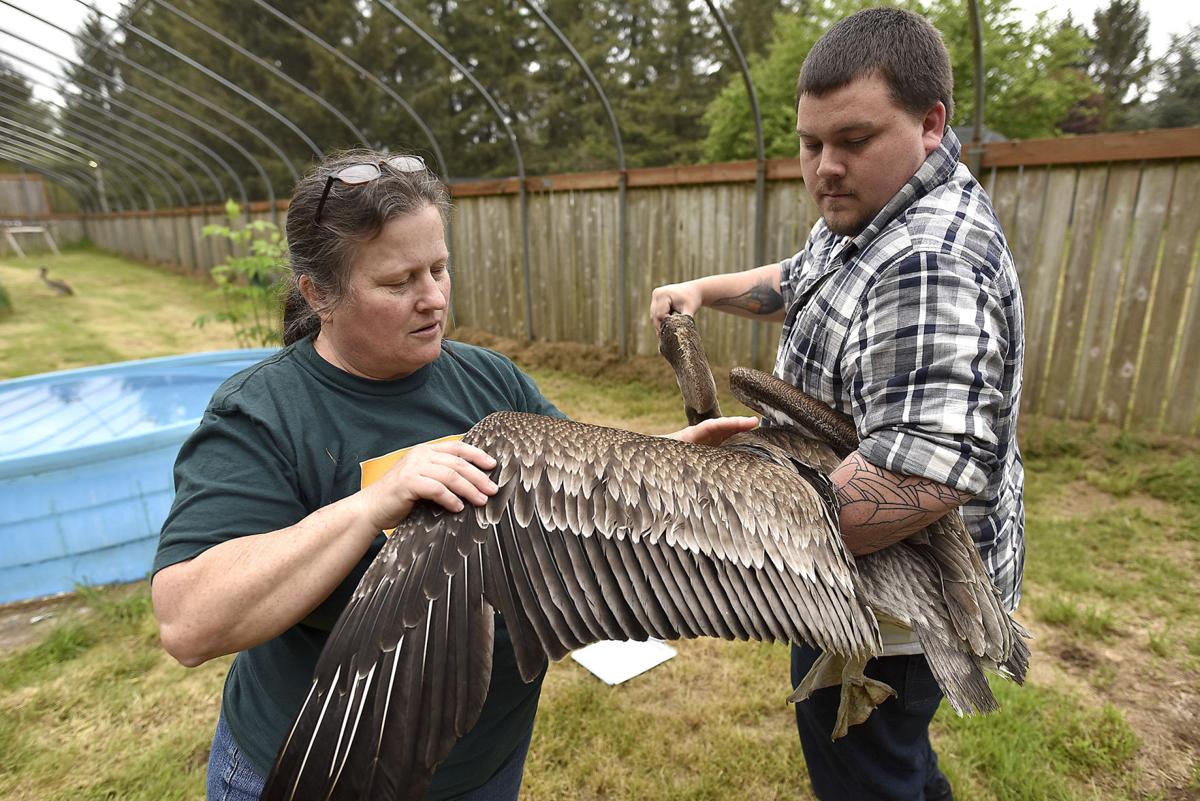 Reva Lipe and Josh Saranpaa examine a brown pelican in an enclosure. 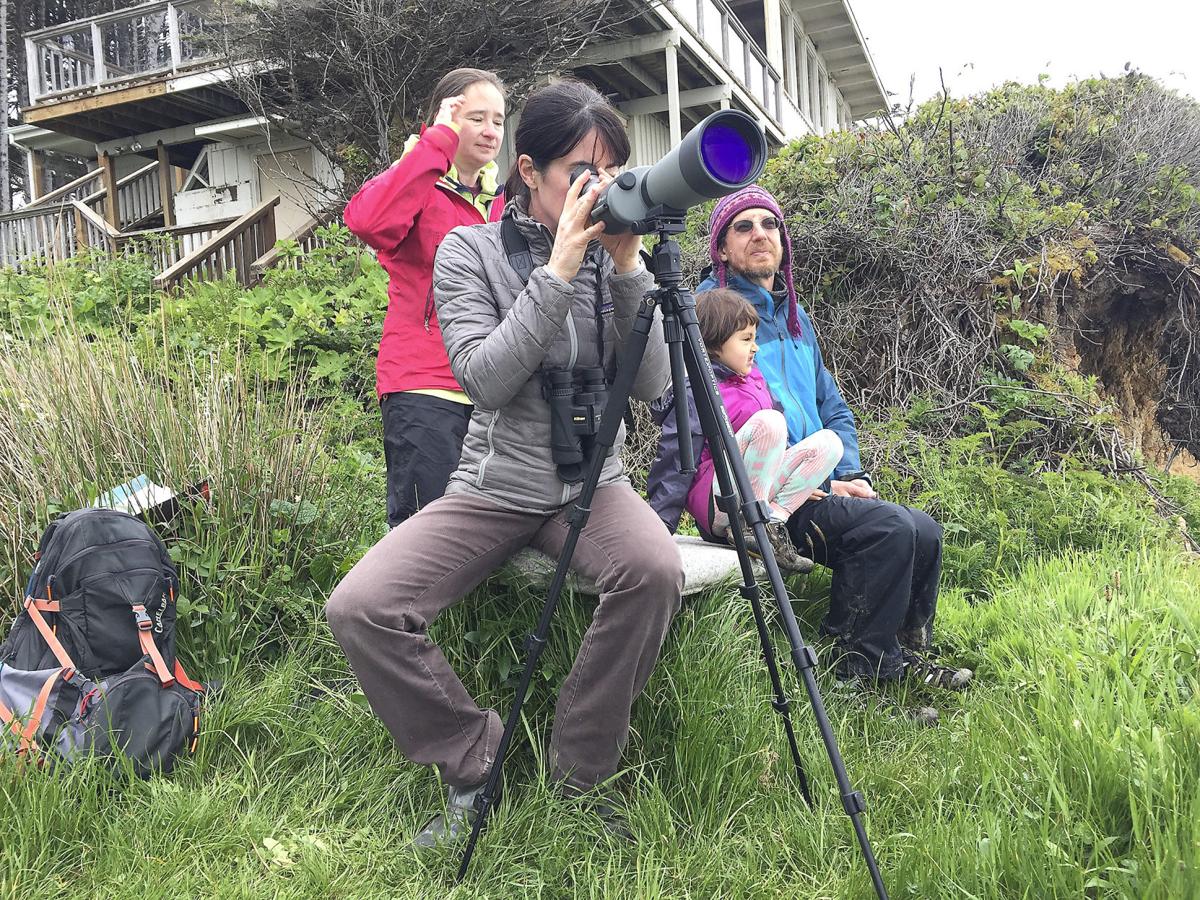 Nadia Gardner, a local environmental advocate, leads a group of citizen scientists documenting brown pelicans and other seabirds during a recent survey.

Josh Saranpaa, executive director of the Wildlife Center of the North Coast, holds a brown pelican treated at the facility.

Several brown pelicans are treated at the wildlife center.

Biologist Deborah Jaques, left, and Reva Lipe take measurements of a brown pelican at the Wildlife Center of the North Coast.

Reva Lipe and Josh Saranpaa examine a brown pelican in an enclosure.

Nadia Gardner, a local environmental advocate, leads a group of citizen scientists documenting brown pelicans and other seabirds during a recent survey.

The Wildlife Center of the North Coast has already cared for several starving young California brown pelicans this spring.

Brown pelicans, which migrate north in the spring from nesting colonies off Southern California and Mexico, spent several decades on the federal endangered species list because of exposure to pesticides like DDT and other contaminants. Their delisting in 2009 was a success story, but concerns remain about the birds’ continued survival.

Chief among these concerns is the availability of food.

Anchovy and sardine stocks — important sources of food for brown pelicans — have collapsed in portions of the birds’ range. At nesting colonies in the south, researchers are concerned that lack of food is affecting the pelicans’ productivity. Some researchers theorize shifting ocean conditions could drive both prey and predators northward. In the meantime, a northern stock of anchovies remains an important source of food in the birds’ nonbreeding range, which includes roosts in Clatsop County.

“That’s a major concern and threat for this species,” said Michelle McDowell, a biologist with the U.S. Fish and Wildlife Service.

Brown pelicans have long lives — with a maximum documented life span of 43 years.

“They don’t have to breed every year, but making sure they have those food resources, that’s the big story of making sure this species is going to do well into the future,” she said.

It isn’t uncommon for wildlife center workers to have starving pelicans on their hands while the birds are up here. Sometimes pelicans stay north for too long, into late fall and early winter, and get stuck when food runs out.

But researchers say to have young pelicans arriving in Clatsop County in this condition points to issues that began earlier in the migration. The birds are also showing up later than they have in the past, according to the Fish and Wildlife Service. But so are other bird species.

Six to seven California brown pelicans circled Castle Rock in the last seconds before 5 p.m. on Saturday. But they flew over to the far side of the large offshore rock near Arch Cape and disappeared from view so Nadia Gardner, an environmental advocate and Arch Cape resident, didn’t count them. She and other volunteers — citizen scientists — were keeping an eye out for brown pelicans as they returned to historic roost sites for the evening, participating in a survey up and down the West Coast.

The survey is a collaboration between the Fish and Wildlife Service, Cornell Lab of Ornithology, state agencies, Audubon Society groups along the West Coast and Conservacion de Islas. It occurs once in the spring and once in the fall in an effort to count and observe the birds across their range. The next survey is scheduled for September.

Biologist Deborah Jaques, who has studied the birds on and off for decades, wants to pay more attention to the pelicans’ nonbreeding range, which includes historic nighttime roosts like Castle Rock and East Sand Island in the Columbia River estuary. She has created an organization that she hopes will be able to monitor roost sites on on a monthly basis.

Researchers with Oregon State University study the tern colony that nests on East Sand Island. They spend some time monitoring the pelicans, too, but Jaques believes more monitoring is necessary to understand how the pelicans use the area, what they eat and what pressures they face during the time they spend here.

East Sand Island isn’t just a home away from home for pelicans or a honeymoon spot for amorous terns. It also hosts a massive double-crested cormorant colony that has come under fire — literally — in recent years.

The U.S. Army Corps of Engineers has management plans in place for the terns and the cormorants and has restricted their nesting habitat, hazed both species and spent several seasons shooting adult double-crested cormorants in an effort to control their growing numbers and protect young salmon from predation.

The agency will not shoot cormorants this year, but will haze the birds and destroy nests.

“They’ve come all this way, they’re relying on this northern (anchovy) stock, they need somewhere to rest,” Jaques said. “Can they rest there and what does salmon restoration and hazing of other birds (mean), how does that affect them?”

East Sand Island is ideal for pelicans in many ways, McDowell said. It is located in a food-rich environment, it provides a relatively safe place to gather in large numbers and it hosts other sea and water bird species.

Several years ago, researchers reported that brown pelicans were building nests on East Sand Island. None of the nests were successful, but it marked the northernmost brown pelican nesting activity ever recorded.

In 2014, Roby told reporters with Oregon Public Broadcasting the birds’ migratory patterns had been shifting northward for three decades, mirroring a shift by similar pelican species on the East Coast. The East Coast birds were also expanding their breeding range. All were changes Roby attributed to climate change.

There are an estimated 70,700 breeding pairs of California brown pelicans. Of the thousands that flock to East Sand Island, only three to 15 pairs have ever been seen attempting to build nests or breed there, McDowell noted.