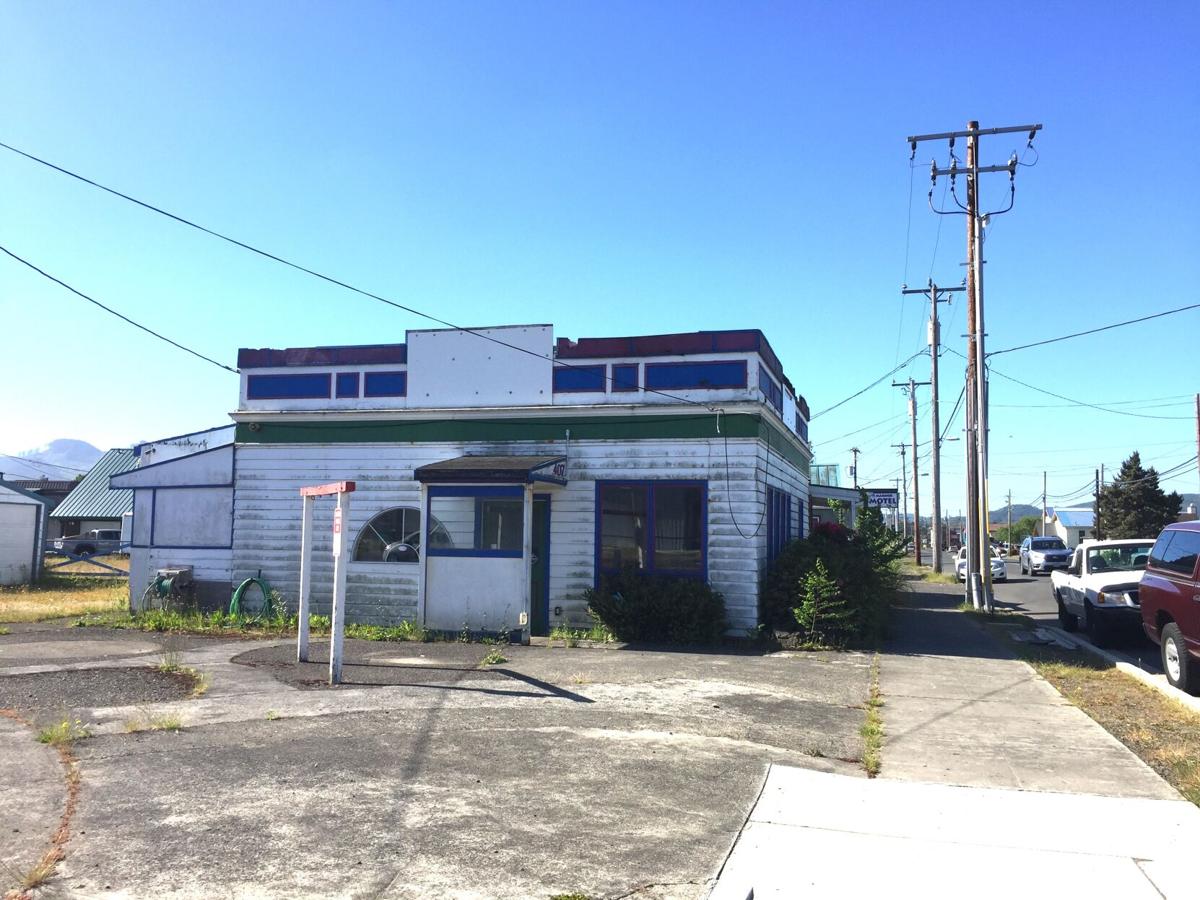 A commercial building in Seaside sits on one of the sites hotelier Masudur Khan aims to build apartments.

Looking west at where the proposed River Run apartment complex would stand. 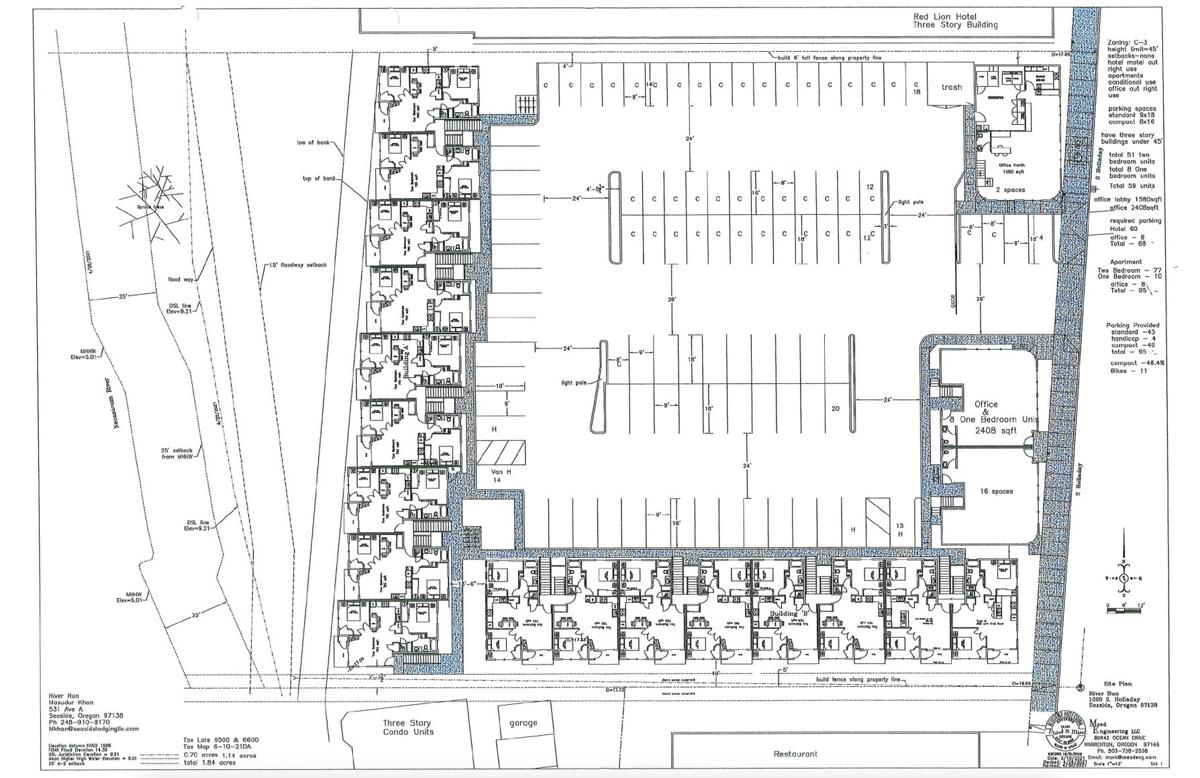 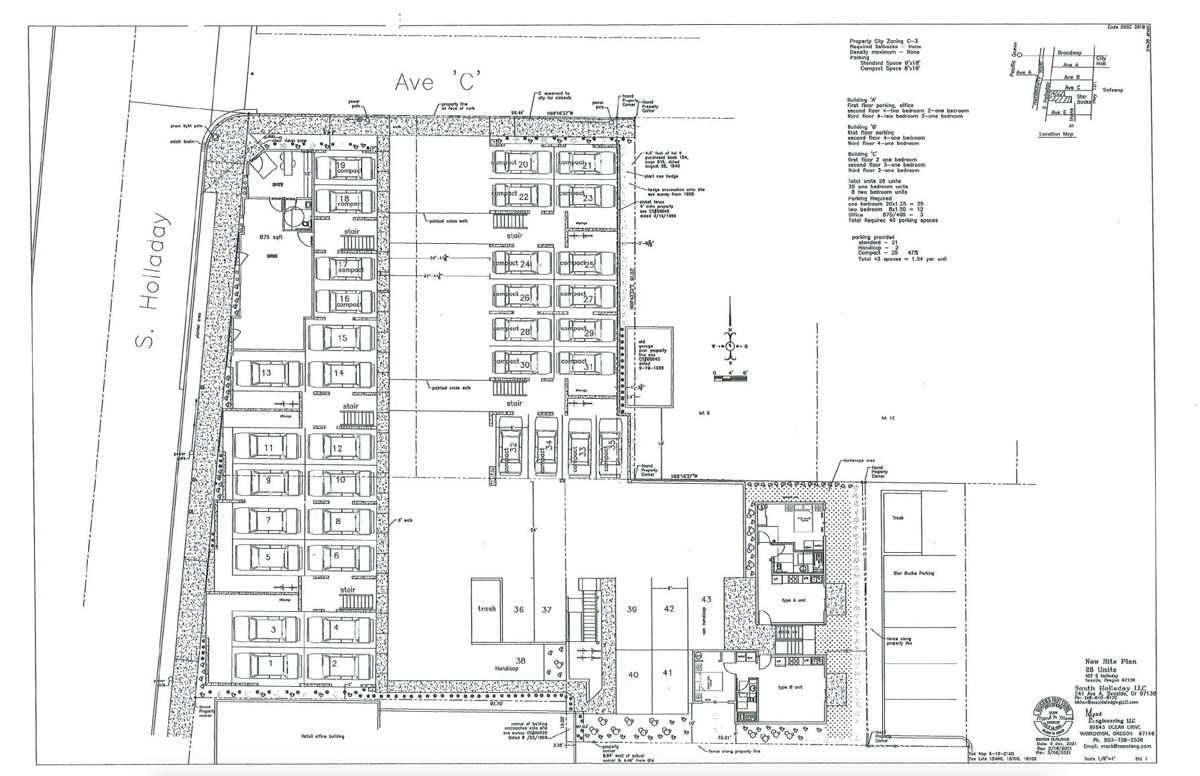 Plans for a proposed apartment complex on S. Holladay Drive.

Masudur Khan owns five hotels in Seaside — and could build more. But the hotelier is turning his sights to developing two apartment complexes with more than 80 units aimed at stemming a lack of affordable housing.

“I’m excited for the projects,” Khan said. “I could build a hotel, but I prefer to do the housing because that’s most important for the city at this moment. At this moment, we have enough hotels.”

Khan, who serves as chairman of the Oregon Restaurant & Lodging Association, is considering using some of those apartments for his own employees, engineer Mark Mead said at last Tuesday night’s Planning Commission meeting.

“I do know that part of the units will be some of his employees, because he has 100-and-something employees between all the different hotels in Cannon Beach and Seaside area,” Mead said.

On S. Holladay Drive, Khan plans to replace four old retail and storage building with a three-building, 28-unit complex. The site is located in the city’s general commercial zone. It also contains parking and open space.

Building A will include a small, 875-square-foot office space to be used for management and maintenance of the project, along with a possible small office space to be rented out. The second and third floors will provide four two-bedroom and two one-bedroom apartments.

Building B will provide parking on the ground floor. The second and third floors will provide four one-bedroom apartments.

River Run, Khan’s second proposed apartment development on S. Holladay Drive, would be located between Riley’s Restaurant and the Red Lion Inn & Suites. The proposed 59-unit development will replace existing commercial and residential buildings with three separate apartment buildings and one building dedicated to office space, a lobby and housekeeping.

River Run is “a beautiful location for an apartment,” Khan said, sitting opposite the Necanicum River and close to downtown and restaurants.

Building A will face the water and will be a three-story building with nine two-bedroom apartments on each floor for a total of 27 units.

Building B, along the south property line, will be three stories, with eight two-bedroom apartments on each floor for a total of 24 units.

A mixed-use building will be three stories with two 1,200-square-foot office spaces on the ground floor. The second and third floors will provide four one-bedroom apartments on each floor for a total of eight units.

Seaside resident Patrick Roshay said notice for the meeting had come late. He said that the Necanicum River could be damaged or wildlife threatened from the proposed development. Emergency vehicles would have limited access to the area. “It’s a safety concern,” he said. “In the plans themselves, there isn’t a lot of wiggle room.”

Scott Alderson, who lives in Sandpiper Village, echoed those concerns. “I don’t think fire trucks are really great at 90 degree turns, which means we no longer have fire protection,” he said.

He also expressed concerns about noise and traffic.

Khan said he hopes to start the projects in September and complete them within a year.

With two developments and the recent purchase of a single-family home, Khan has shown his confidence in the future of S. Holladay Drive. “I like the river,” he said. “I’ve always been a water guy.”