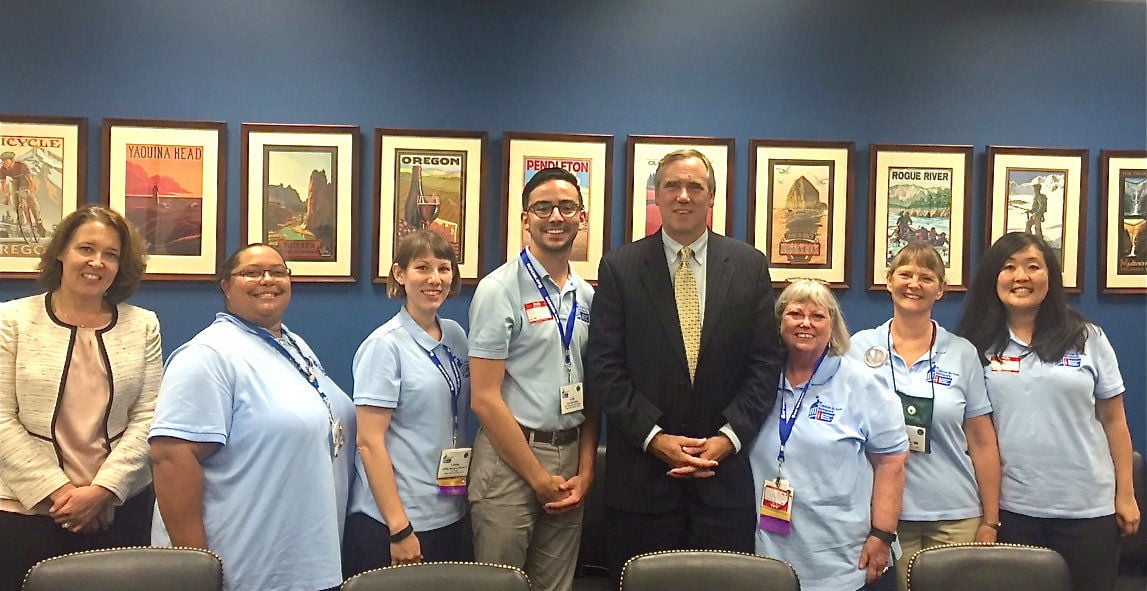 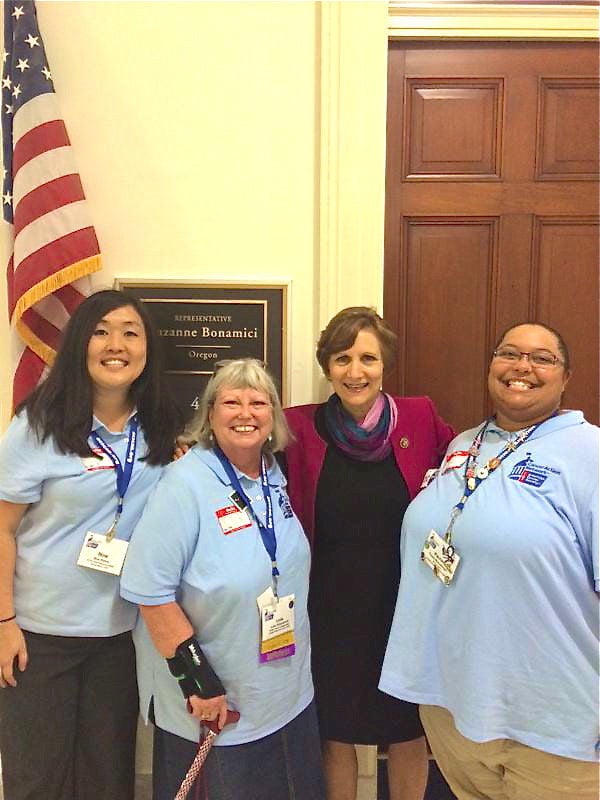 When Lois Fitzpatrick heard the fateful words “you have cancer” in 1995, she worried she would not even get to see her daughters, then 9 and 14 years old, advance from elementary school and graduate high school.

“It just tore my heart apart for fear of them,” said the 63-year-old Seaside resident.

Fitzpatrick is emboldened in her advocacy work by “a fire in my gut,” she said. “It’s just the right thing to do. I feel I speak for those who cannot speak for themselves: those who are too sick, too afraid, too worried, who are dead and those who do know yet that they may have cancer.”

Fitzpatrick’s journey started in 1995 when she was diagnosed with stage I breast cancer — although her tumor was closer to the size of a stage II tumor. Physicians told her she needed a double mastectomy, but she declined it, since the research she did seemed to not warrant the surgery. She went through numerous other surgeries and treatments, however.

Even after being diagnosed cancer-free, she stays on top of preventative measures and screenings to this day.

“I try to do everything I need to do, so if it comes back, we catch it early,” she said.

In 1997, while working as a lobbyist for the Montana Library Association, Fitzpatrick was asked to testify on two state bills related to cancer. She did so as a private individual. From there, she joined the American Cancer Society and switched to the American Cancer Network after its creation in 2001.

Since becoming involved, she said, “I have been working actively on changing public policy, changing legislation and protecting the lives of people and trying to help them live.”

Fitzpatrick moved to Seaside in 2009 after retiring and went to the Cancer Action Network’s headquarters in Portland to resume her work in Oregon. She is active both in Salem and in Washington, D.C.

About four years ago, Fitzpatrick became the lead ambassador from Oregon for the Cancer Action Network, a nonpartisan liaison organization to the American Cancer Society. Funds received by the network are not tax deductible, which allows the group to advocate on different issues and lobby for legislation. The network does not endorse political candidates but occasionally conducts surveys on cancer issues with candidates and then publicizes responses on the organization’s website.

The group stays neutral because the affects of cancer transcend political party, Fitzpatrick said, adding cancer “doesn’t care if you’re Republican or Democrat, rich or poor, young or old. It will attack anyone at any age.”

Educating the public and officials is a big part of her work. As a former librarian and college professor, she firmly believes information is power.

She wants people to have a healthy, not debilitating, fear of cancer — a fear that motivates them to get screened regularly and to seek treatment as early as possible.

“It’s when you don’t act on it, and you could’ve acted on it, that’s when you have the regrets,” Fitzpatrick said.

Not only did her own experience empower her as an advocate, but she also experienced the death of her father to lung cancer when she was 17.

She said it has inspired her work. “I was determined people were not going to die anymore of this horrible disease and rob children of their parents and parents of their children,” she said.

During the network’s annual Leadership Summit and Lobby Day in Washington, D.C, more than 700 volunteers from across the country petitioned their legislators on three key issues.

First, the volunteer lobbied for congress to appropriate $6 billion over the next two years to the National Institutes of Health, with $1 billion going specifically to the National Cancer Institute for cancer research.

“I’m alive because of research that happened 30 years ago,” Fitzpatrick said. “There is a lot of research that is literally right on the cusp and it may not be funded. We’re really sure so much could happen if we could get that money to NCI and NIH.”

During this year’s Leadership Summit, she said, they heard from scientist who expressed concern about the difficulty in drawing young people to the profession, and also having young scientists move to other countries, because of a lack of funding in the U.S.

Secondly, the lobbyists asked for support on HR 1220 and S 624, regarding the Removing Barriers to Colorectal Cancer Screening Act of 2015. The legislation would amend the Social Security Act to waive coinsurance under Medicare for colorectal cancer screening tests, regardless of whether therapeutic intervention is required during screening

Currently, there is a loophole in Medicare, Fitzpatrick said. When people go in for screenings, which are free, but doctors detect and remove polyps, or abnormal growths, as a result of the test, the procedure then gets billed as diagnostic, which burdens patients with co-payments and co-insurance.

Fitzpatrick said she hopes fixing the loophole will prompt more people to be screened, especially since colon cancer is very preventable.

Lastly, the volunteers focused on promoting HR 3119, regarding the Palliative Care and Hospice Education and Training Act.

Palliative care is a medical sub-specialty that involves professionals — which could include doctors, nurses, therapists, social workers, ministers, dietitians or others — treating the symptoms, side effects and emotional issues experienced by patients with serious illnesses and their caregivers in order to give them the best possible quality of life. Palliative care is given alongside curative care, and is not hospice — a distinction Fitzpatrick said is important to make.

“It could turn into hospice care, but we would prefer it didn’t,” she said. The purpose of palliative care “is to give people back their lives, to make them enjoy whatever it is they enjoyed before, whether it’s sitting and knitting, painting, running marathons, teaching.”

Fitzpatrick emphasized caregivers because she believes the disease sometimes can take an even greater toll on them, as she saw through her own experience.

“I was so busy doing treatments, fighting for my life. They had to watch it, and they were helpless,” she said of her family.

HR 3119 would amend the Public Health Service Act to increase the number of palliative care faculty at medical and nursing schools to promote education and research on the topic and to support the development of careers in academic palliative medicine. The bill also would set up grants and fellowships for doctors and nurses to study the topic.

Fitzpatrick said the Oregon delegation was supportive of the legislation. Each advocate focuses on the representatives from his or her congressional districts and state, but Fitzpatrick said “hearing from my colleagues through the country, it sounds like we made a lot of progress this time.”

“We hope when these things come up, they will vote in support,” she said. “They need to know the story of cancer, the face of cancer. They have to understand this is human beings — that it’s children, that it’s grandmas, that it’s young people.”

The Cancer Action Network group in Oregon now is planning for a research forum on palliative care in November. Additionally, they are looking ahead to what they want to do next legislative session, Fitzpatrick said.

“There are so many different things we need to work on in Oregon that just would make people’s lives better,” she said.

To learn more or get involved, visit ACSCAN.org/Oregon.

‘It’s when you don’t act on it, and you could’ve acted on it, that’s when you have the regrets.’