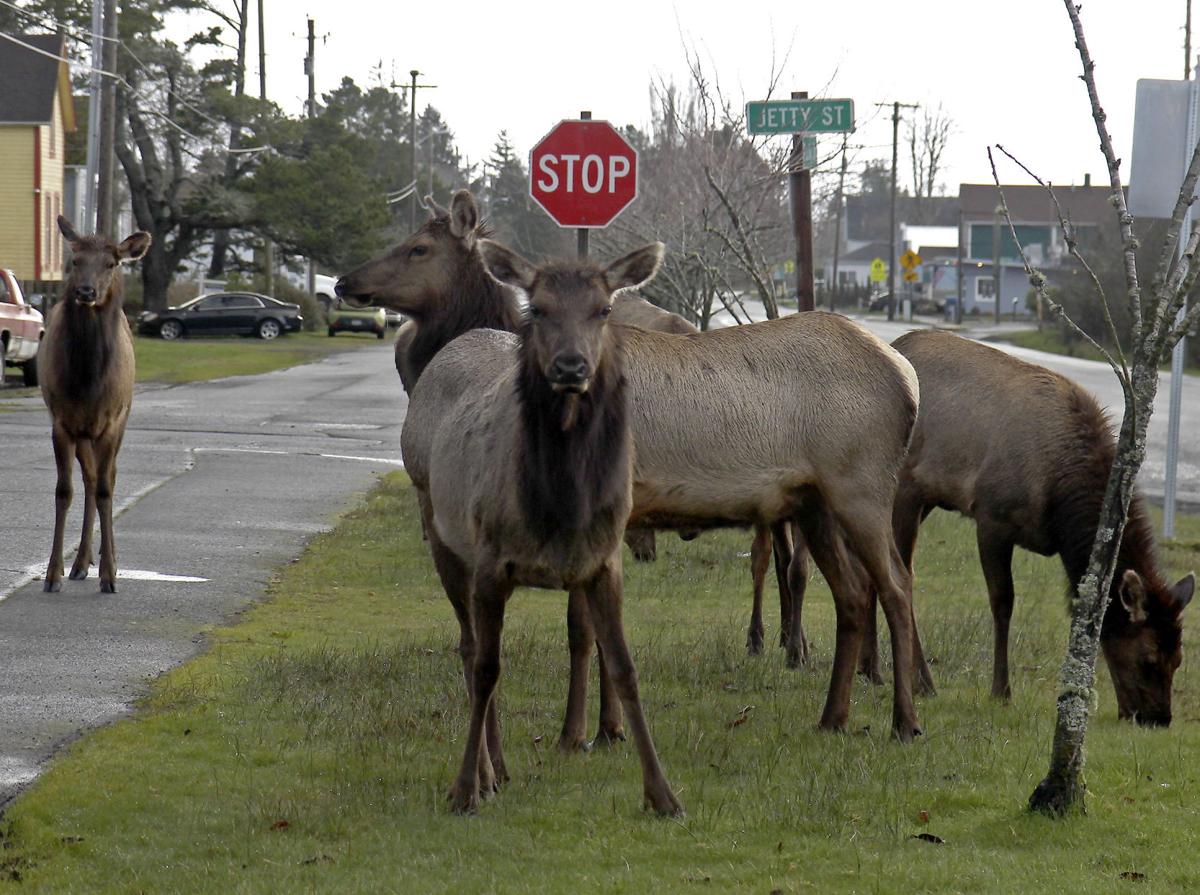 A herd of elk grazes in Hammond. 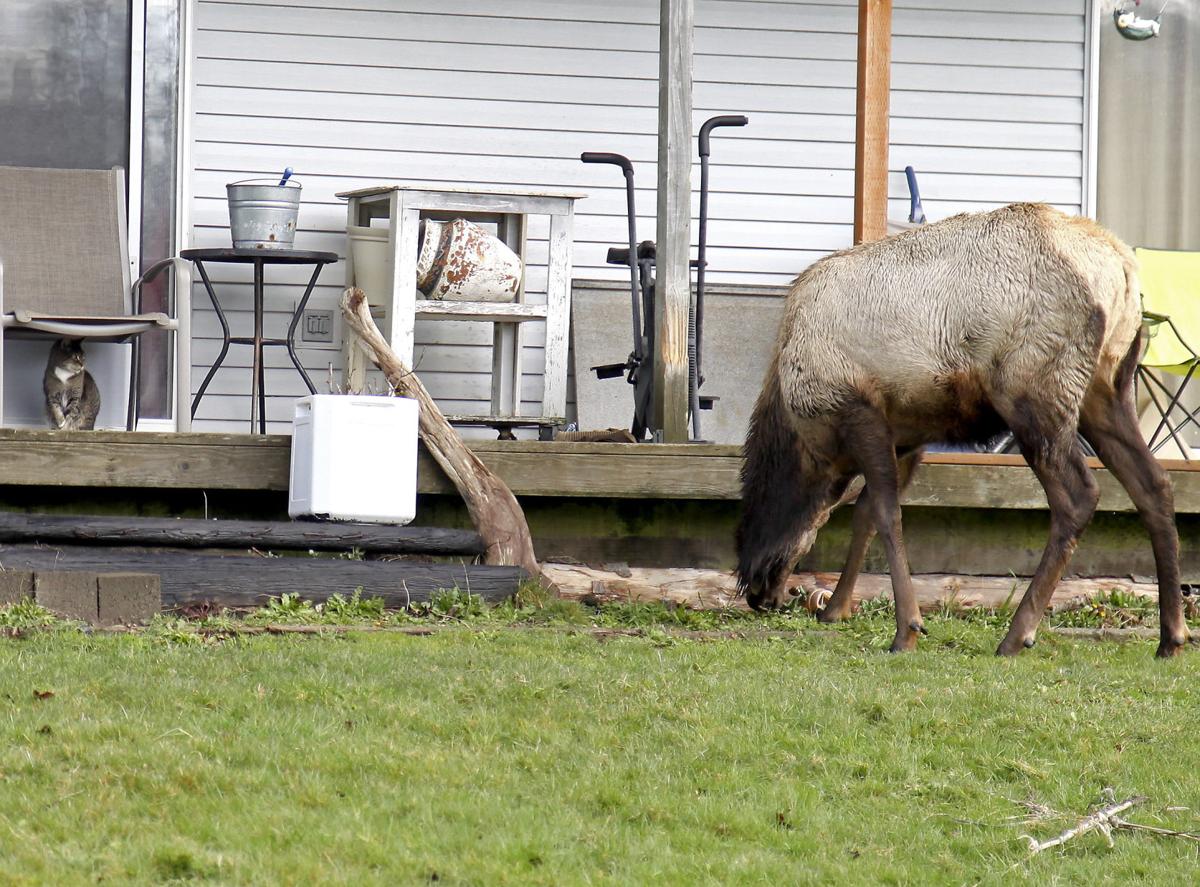 A cat, far left, keeps a close eye on an elk grazing in a yard in Hammond. 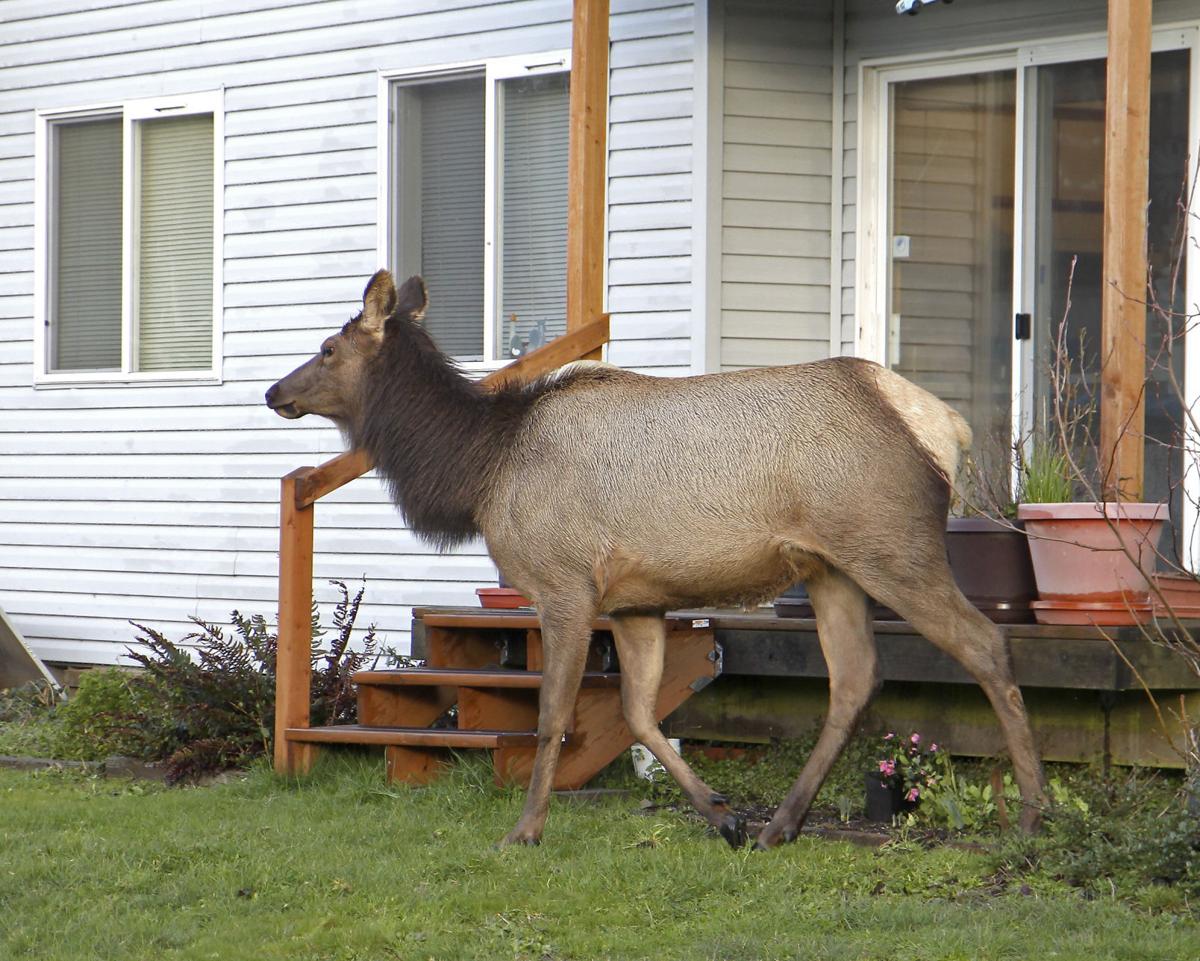 Elk herds in the area have been known to cause damage to property. 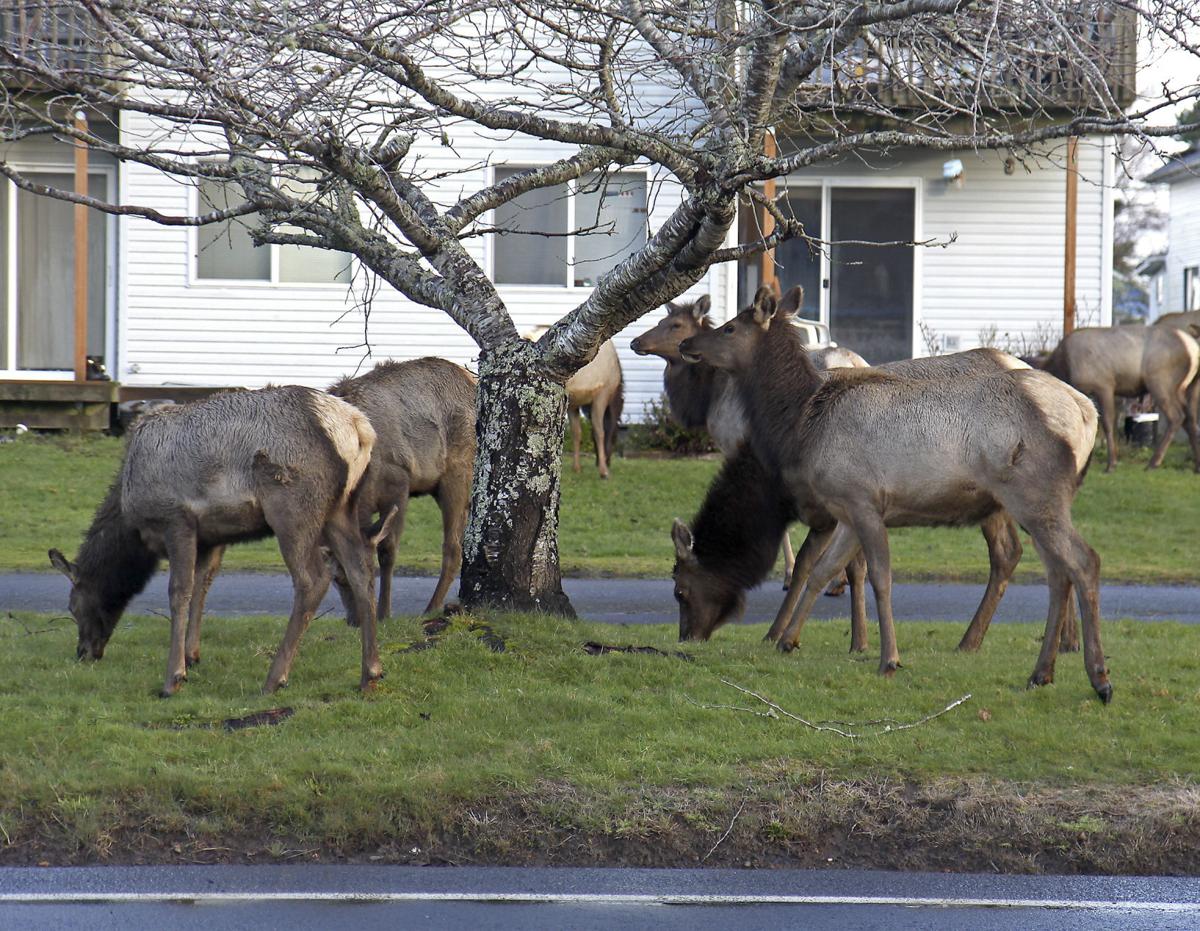 An elk herd moving through Hammond came close to roads, causing several vehicles to slow down.

A herd of elk grazes in Hammond.

A cat, far left, keeps a close eye on an elk grazing in a yard in Hammond.

Elk herds in the area have been known to cause damage to property.

An elk herd moving through Hammond came close to roads, causing several vehicles to slow down.

WARRENTON — While residents sat at City Hall in early February and asked their mayor what could be done about elk roaming downtown, five young bull elk nibbled grass in front of a house several blocks away.

Warrenton isn’t Gearhart, where elk are the bane of a golf course, a protective mother elk once menaced beachgoers and people have reported being stuck in their homes or threatened in the streets.

But some locals believe the Warrenton herd is turning into a similar problem, growing in size and becoming too comfortable in town. They worry about damage to property and safety on the road.

“We’re just keeping a sharp eye and staying in contact with Gearhart to see what they’re doing,” Mayor Henry Balensifer assured people who brought the issue to his attention at two of his informal weekly coffee meetings this month.

Rangers at Lewis and Clark National Historical Park hope to provide more data that could inform management decisions going forward. They plan to attach GPS collars to six elk this year if the money remains available in the budget, said Chris Clatterbuck, chief of resource management at the park.

“We’ve seen two different herds in the park, and we’re not sure of the fidelity of the herd: Does it split apart in two and go back to one? Are these two separate entities?” Clatterbuck said. “These conversations have been going on in Warrenton for a while. It’s one of the reasons we wanted to do this project.

“These could be totally different elk than are in downtown Warrenton.”

They just don’t know for sure.

Here is the math, according to Police Chief Mathew Workman: The city encompasses around 18 square miles, and you can’t hunt there. Fort Stevens State Park is right next door. It’s huge. You can’t hunt there, either. Then there’s the military base, Camp Rilea, a little farther down the highway. Also huge and also a place you can’t hunt.

Conclusion: “There’s a lot of area where elk can live and thrive and not have to worry about human predators,” he said.

Scattered around these refuges are neighborhoods, businesses and farmland. It’s difficult to manage elk numbers in such a landscape, said Herman Biederbeck, a wildlife biologist with the Oregon Department of Fish and Wildlife.

Warrenton police field an average of 10 elk-related calls a month, Workman estimated. While there hasn’t been an increase in elk-related calls, he does believe the herd is growing, and it worries him.

He often gets calls from people who have seen a herd by the road and want an officer to come down and park nearby to alert oncoming motorists before the elk cross.

“Any kind of accident with them is usually substantial and can result in some type of injury,” Workman said.

He is also worried about the temptation mature elk present to poachers. He has watched young male elk grow up into real trophy bulls, and he remembers when an old buck with a “beautiful rack” was killed by poachers in Fort Stevens.

Reports of aggressive elk during the mating season are not uncommon, but in 2015 Workman and his officers responded to several calls about unusually aggressive elk. Police later linked the aggression to people feeding the animals.

In the city’s code, feeding wildlife other than songbirds or squirrels now comes with penalties as high as $250 per offense.

Still, Workman said, “As many problems as they cause for locals, the tourists and people visiting love them.”

Many times traffic calls that include elk in the narrative actually have to do with motorists who pull over to photograph a grazing herd.

Exact elk population numbers are difficult to come by in Clatsop County. Warrenton’s elk fall into a larger management category the state refers to as the Saddle Mountain management unit — geography that encompasses habitat from Saddle Mountain and Jewell Meadows to Astoria and Hammond.

More specifically, the Warrenton elk are the herds that frequent the Clatsop Plains area, which stretches down between the coastline and U.S. Highway 101 from the south shores of the Columbia River to about Seaside. Over the years, the plains have disappeared under a blanket of development.

Biederbeck guesses Warrenton residents are seeing a combination of factors collide. As development continues, habitat shrinks. Elk may gather in larger numbers in remaining habitat or move to new locations. Meanwhile, there are minimal cougar and bear populations, no serious disease issues, no wolves. Hunting by humans in a populous area is “a difficult proposition at best.”

“Some of the natural limiting factors are basically gone,” Biederbeck said.

In Gearhart, people have seen an undeniable increase in the local elk population in the past five years. Where there used to be around 30 elk, there are now closer to 80 on average. State biologists aren’t entirely sure where those extra elk came from, but theorize they might have come from the north, pushed south by development.

If Lewis and Clark National Historical Park is able to get GPS collars on elk, staff will be able to hone data they have been collecting since 2008 about the herds in and around the park, and begin matching fact to speculation.

While early data gathered through regular elk pellet surveys inside the park and driving surveys points to a recent decline in elk use around the park, as communities talk about solutions, Clatterbuck says there needs to be more information about elk-related property damage and accidents. Such information could help identify problem intersections or areas.

“There’s cause for concern and there are issues — gardens being eaten and yards being trampled,” said Carla Cole, natural resources project manager at Lewis and Clark who has helped with many pellet studies in the park. “But what is the problem and what will solve the problem?”

For the park, built around a replica of Fort Clatsop where the explorers Meriwether Lewis and William Clark and their Corps of Discovery spent the winter in 1805, there is also the issue of history. The story of the explorers and Fort Clatsop is just as much a story about elk: their meat and their skins.

Elk continue to be an important food source for scavengers from coyotes to small rodents. They are part of a tradition of hunting in the region. They disperse seeds as they tromp through the forest and other animals use the game trails they create.