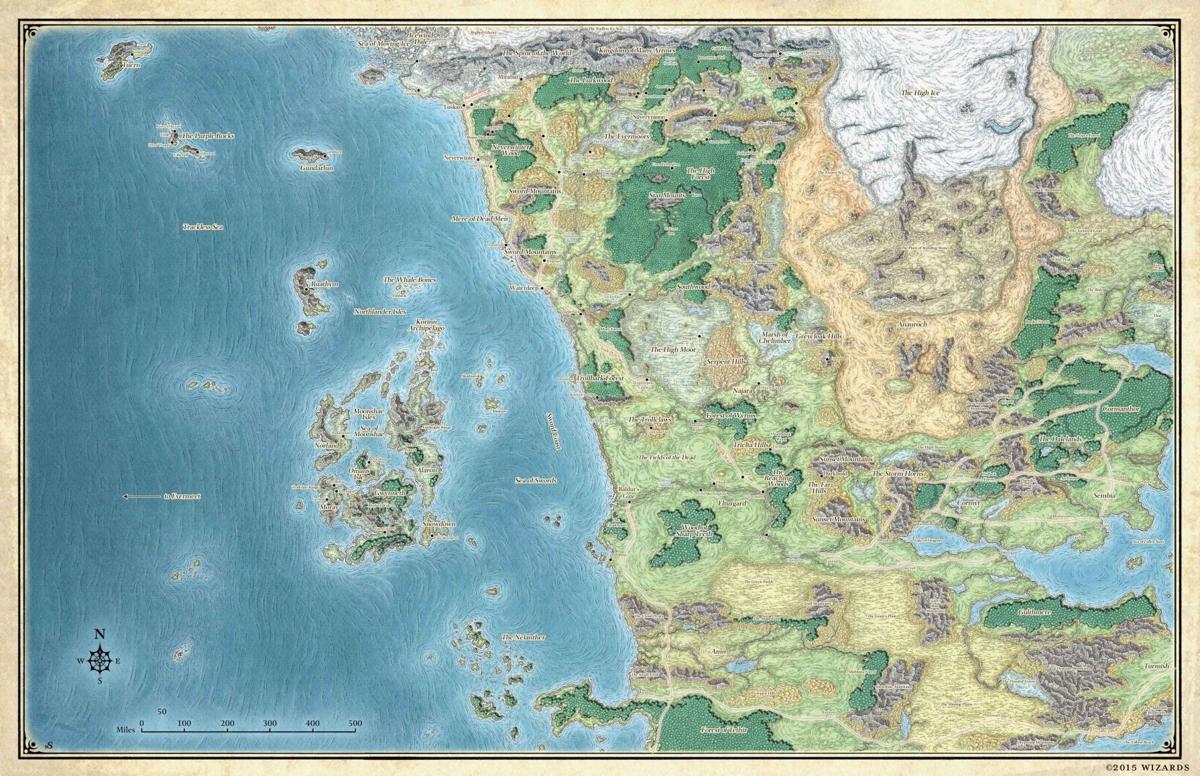 The Sword Coast in the game Dungeons & Dragons, is described as “a region of Faerun that comprises shining paragons of civilization and culture, perilous locales fraught with dread and evil, and encompassing them all, a wilderness that offers every explorer vast opportunity and simultaneously promises great danger.” 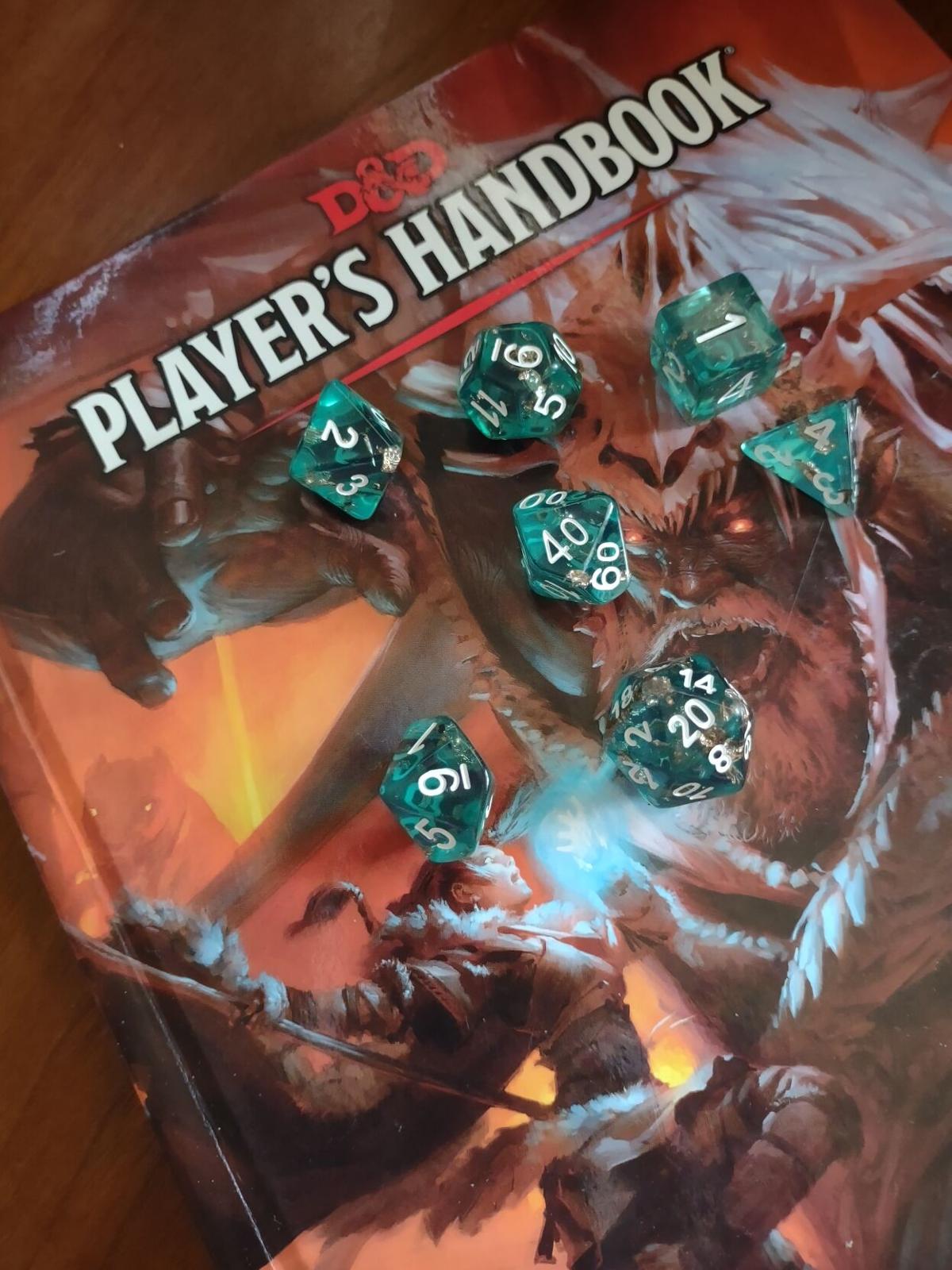 The Sword Coast in the game Dungeons & Dragons, is described as “a region of Faerun that comprises shining paragons of civilization and culture, perilous locales fraught with dread and evil, and encompassing them all, a wilderness that offers every explorer vast opportunity and simultaneously promises great danger.”

The fantasy role-playing game Dungeons & Dragons was the ideal solution.

“You have a chance to be creative,” said Ann Branson, the assistant youth services and teen services librarian at the Seaside Public Library. “There’s a lot of collaboration and teamwork. It teaches a lot of really good skills for kids — and all of us, too,” she said. “It’s a fun escape that’s still healthy and productive. It’s a great way to make friends.”

The imaginative game was created in the 1970s and has taken slightly different forms over the past 50 years. In general, it consists of an adventure or story that is narrated by the dungeon master. The other players are the adventurers who contribute to a structured yet fundamentally open-ended narrative with an overarching theme or goal.

One of the first steps is building a character. Participants can choose from being an elf, dwarf, human or fairy, and accompanying titles, such as sorcerer, monk, barbarian, druid or bard. During the course of a game, the adventurers run into a variety of nonplayer characters, all created and controlled by the dungeon master, who provides information or assistance to the group, or are sometimes villains who must be defeated in combat.

When Branson was hired in September, the library’s Teen Tuesdays program had been out of commission for several months because of the pandemic. She was tasked with helping to rebuild the program and introduce activities that could be done in a virtual environment. The idea of Dungeons & Dragons was pitched during Branson’s interview, and by November, she had incorporated the game into the monthly lineup for Teen Tuesdays.

At the Cannon Beach Academy, first and second grade teacher Ryan Hull had come up with a similar idea. During the end of 2019-20 school year, when he was teaching third through fifth grade, he asked his students if they wanted to create characters for fun. Of the 23 in his class, 19 chose to. Throughout the following summer, he kept thinking, “I’ve got to do something about this.”

At the start of the new school year, Hull invited the students to start an ongoing campaign, which means continuing the same story with the same characters from week to week with different quests or tasks along the way.

He originally had three students involved, but the group has since grown to seven kids between second and fifth grade. They meet once a week on Wednesday afternoons.

Branson also has about seven or eight teens participating each session. It’s not always the same people, but she encourages the kids to come play when they can, and she works the story around the absences. One of the more difficult aspects is they only have an hour per session, which isn’t much time to advance the story. Branson focuses her campaign on smaller tasks, puzzles and problem-solving situations that can usually be completed in the timeframe, or at least leave the players feeling accomplished.

Both Hull and Branson likened Dungeons & Dragons to theater, which they’re individually involved with at the community level. In Branson’s experience, it can be challenging for some people to open up to others and make friends. But the game provides a safe, fantastical and fun environment that is conducive to putting kids at ease as they work toward a shared goal.

“In a strange way, it’s easier to be yourself when you’re playing a character,” Branson said, adding it provides a starting-off point for developing friendships that extend beyond the game. She’s observed certain teens grow more engaged, vocal and comfortable over the past six months. “They have a lot of fun, which is the most important thing to me,” she said.

Hull also sees it as an opportunity to introduce real-world issues and allow the kids to work through them in an imaginary environment.

“It’s a great place to talk about things and to talk about scenarios and situations,” he said. “If I know something is going on in the school or someone is dealing with something, I can make that situation happen in the story. … We can role-play it in the game, and I think that’s been really great, too.”

He appreciates watching the students absorb information during different game scenarios and then think critically and collaboratively about solutions. They’ll often generate ideas or thoughts that didn’t cross his mind.

“They are really listening to the circumstances and getting into it and coming up with their own thing,” he said.

It also gives the students a way to channel their energy and hang out with their friends, which has been difficult in the virtual classroom. There often isn’t extra time “to socialize, have fun and kind of let your hair down,” Hull said. Even though they’re also playing the game virtually, it still helps fill that gap.

“I definitely think this was a good opportunity to socialize,” he said.