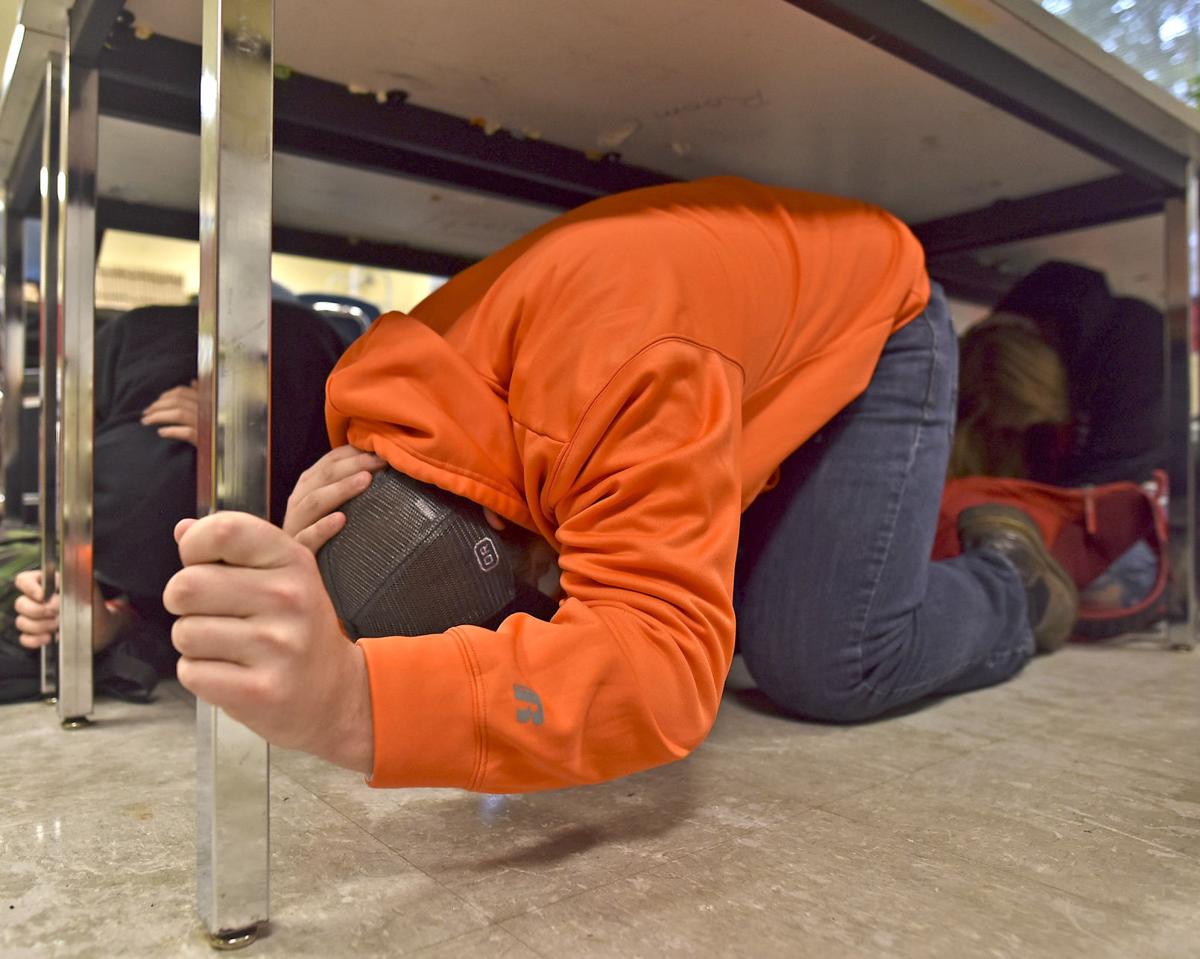 Students take shelter under a table at Seaside High School during an earthquake drill. 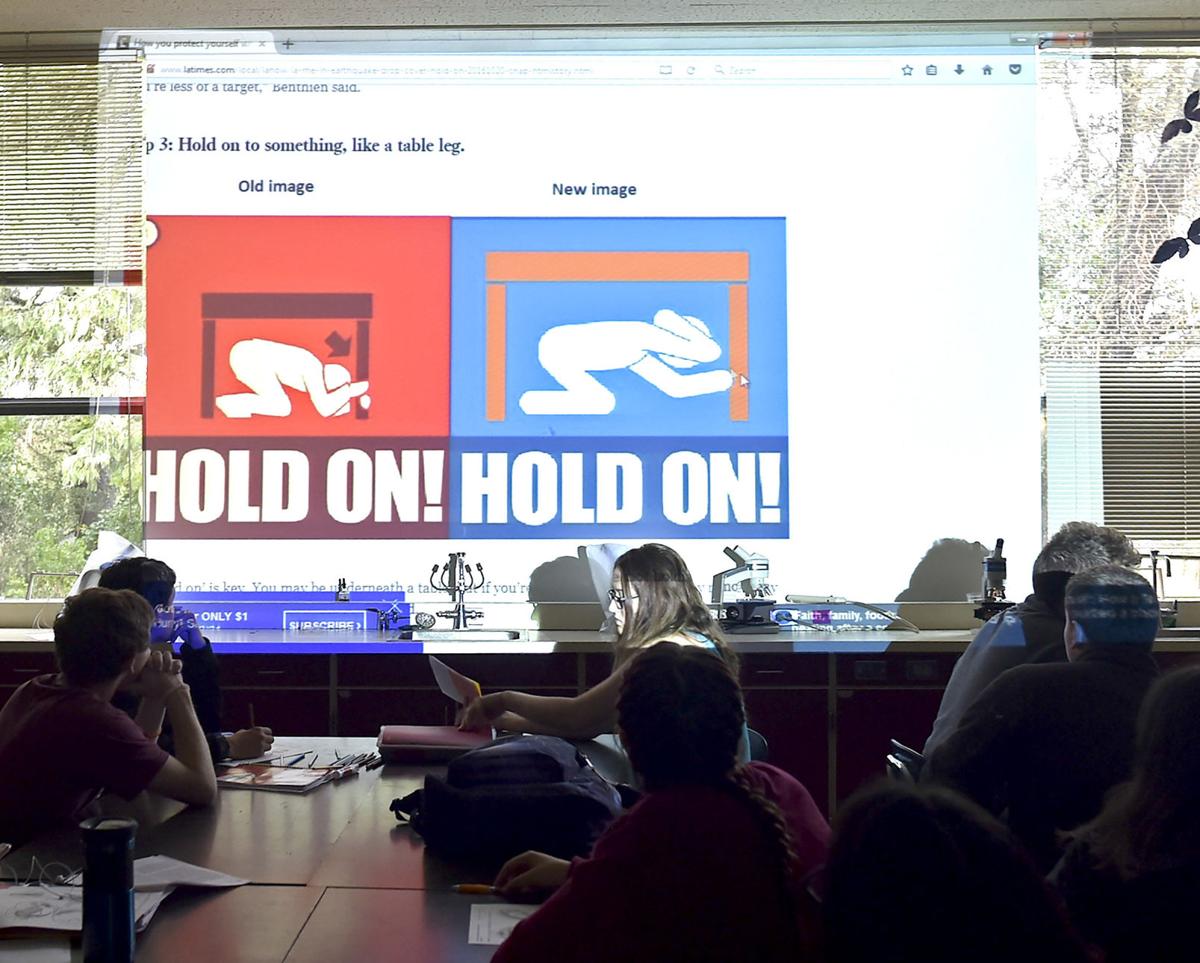 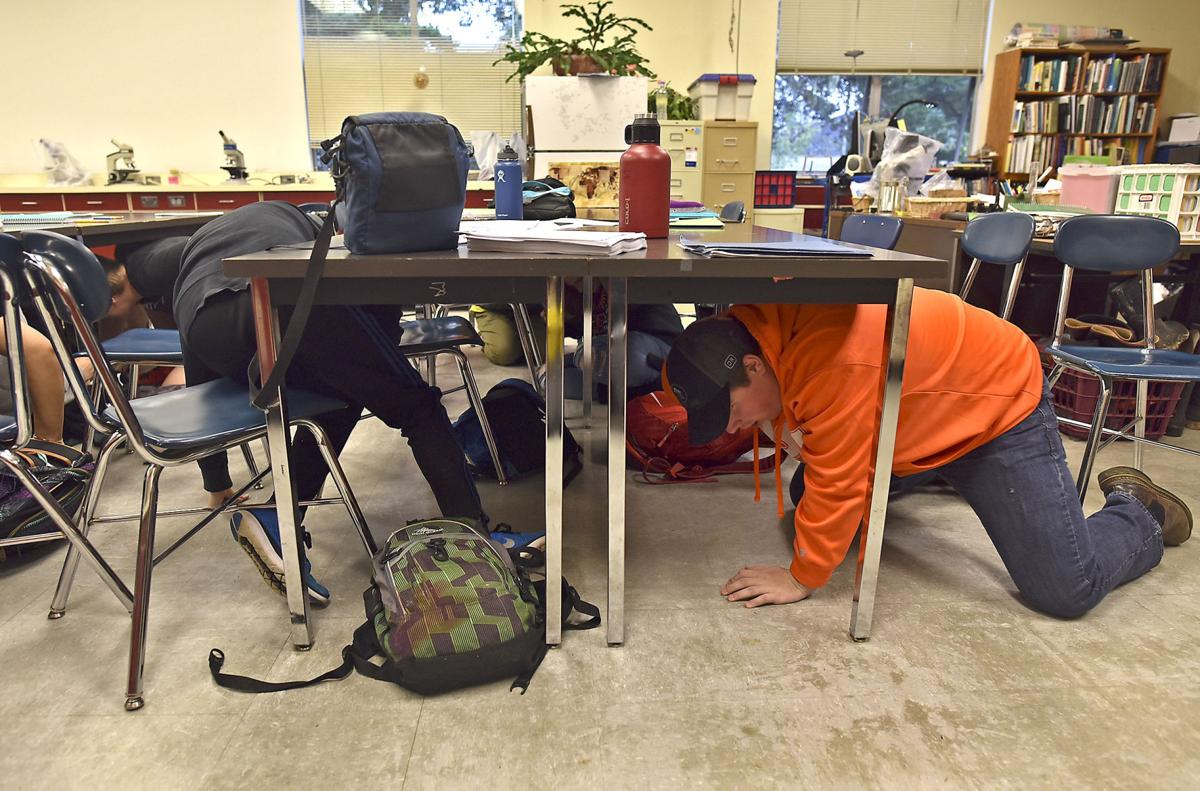 Students at Seaside High School crawl under a table on Thursday, Oct. 19, during the annual Great ShakeOut earthquake drill. 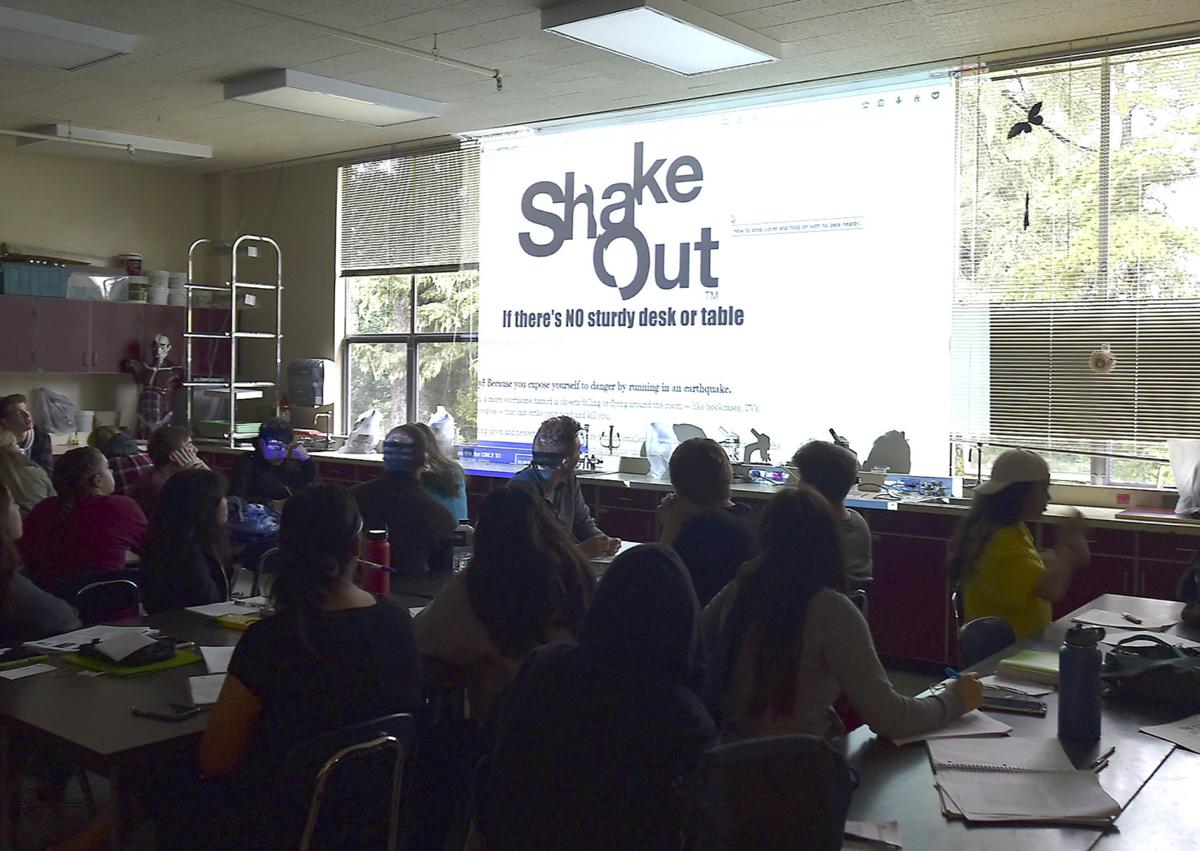 Students take shelter under a table at Seaside High School during an earthquake drill.

Students at Seaside High School crawl under a table on Thursday, Oct. 19, during the annual Great ShakeOut earthquake drill.

As everyone at Seaside High School waited for the Great Oregon ShakeOut drill to begin, biology teacher Suzanna Kruger went over some earthquake preparedness basics.

“When you feel shaking and you drop, you also need to?” Kruger asked, leaving her zoology students to fill in the rest.

“Cover the back of your head,” the students said in unison.

“And when you are under the table, what do you need to do?” Kruger asked again.

“Hold on to it,” the class said back. “In case the table moves.”

At 10:19 a.m. Thursday, Kruger and her students dived under and clutched on as the warning announcement came over the loudspeaker. Seaside School District is one of 580,000 organizations registered for the 2017 Great Oregon ShakeOut, a worldwide event that encourages participants to practice earthquake preparedness techniques.

This is the second year schools in Seaside — vulnerable to the Cascadia Subduction Zone — have performed the drill. Like last year, the drill was also supposed to be paired with a tsunami evacuation route walk, but was canceled due to safety concerns associated with rainy weather and high wind warnings.

“As one of the four schools in Oregon within the inundation zone, it is critical to be prepared. Failing to prepare is preparing for failure,” Seaside High School Principal Jeff Roberts said. “While we hope there’s not an event like this, we want to know students can respond appropriately.”

One of the main concerns in Seaside is whether certain roads and bridges that lead people to higher ground will be intact in the event of a major earthquake and tsunami. But from Roberts’ point of view, the school district is doing all that it can to be prepared.

“We can’t change infrastructure issues. We can’t rebuild bridges. All we can do is educate and prepare our kids to know how to respond,” he said. “The best thing we can do is move the kids out of danger to the new school site, which doesn’t change how we prepare, but is overall a better plan.”

For Kruger, knowing a new school campus out of the inundation zone is on its way is a major source of relief as a teacher.

“We are prepared, but no matter what we do it is going to be chaotic getting that many kids to safety,” she said.

Kruger has taught for Seaside School District since 2003. She said a day hasn’t passed where she hasn’t considered how a seismic event would affect her and her two daughters.

When she goes to bed, she takes mental notes of where she leaves her glasses and her shoes in case she needs to evacuate in the middle of the night. She thinks about how she would connect with her daughters if a disaster happened while they were separated.

“Thinking about these things is half the reason I run — to prepare,” she said, laughing.

When Kruger is teaching her students how to prepare for a seismic event, she thinks of her own children and what she would want them to know.

“All of these kids are someone else’s beloved child,” Kruger said. “I just hope to communicate what they need to know to be safe.”

The drill itself was relatively lighthearted in the classroom. Students giggled to fill the silence as they had to scrunch together under their small tables.

But Kruger said her students know what is at stake.

“There was a lot of discussion about disasters when the school was trying to pass a bond for the new campus,” Kruger said. “Some students came out of that as a little fatalistic — if it’s going to happen, it’s going to happen. But there’s another strand, like the ASB (Associated Student Body) students who really energized the effort to do this drill. A lot of them were thinking of their younger siblings at school in the inundation zone. They were thinking about keeping them safe.”

Miami mayor questions if Florida is ready for Phase 3

See how RBG's trainer honored her