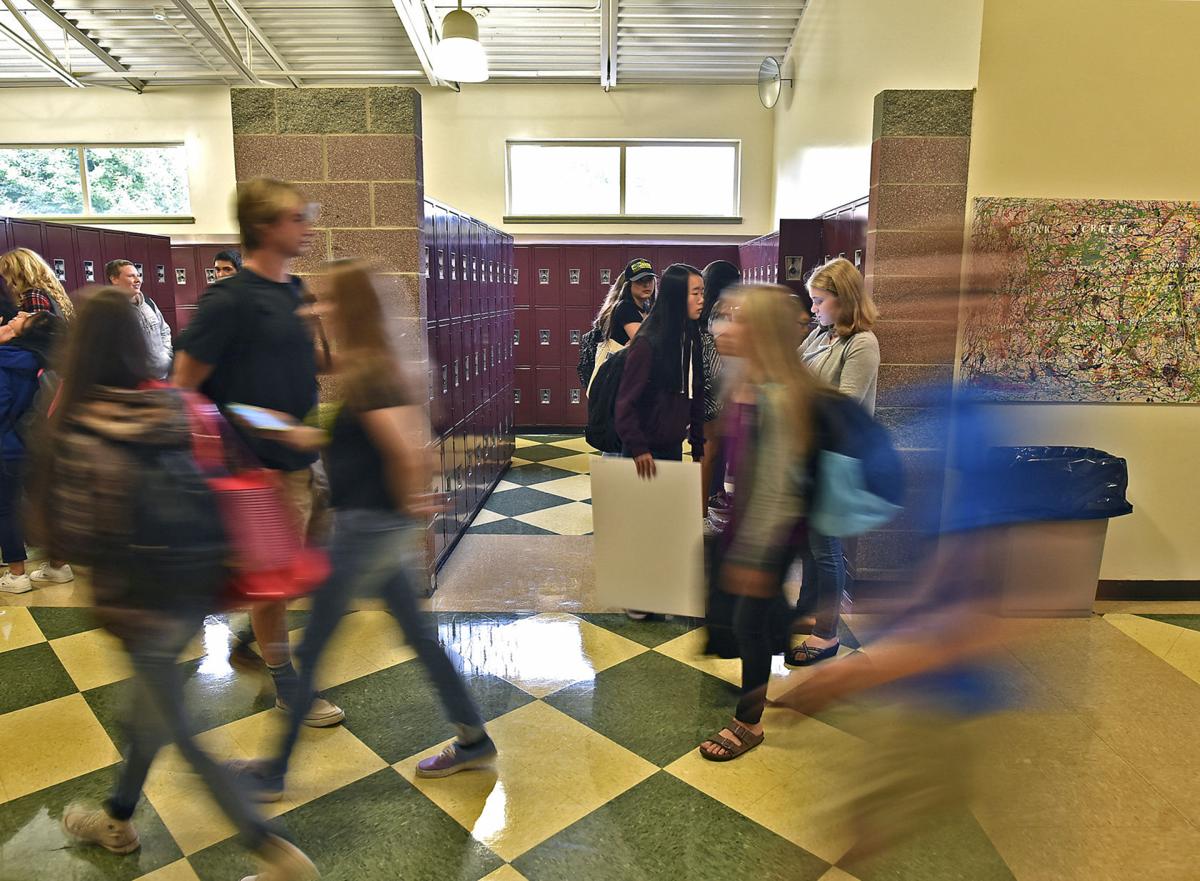 Students visit their lockers at Astoria High School this morning before heading off to the first class of the school year. 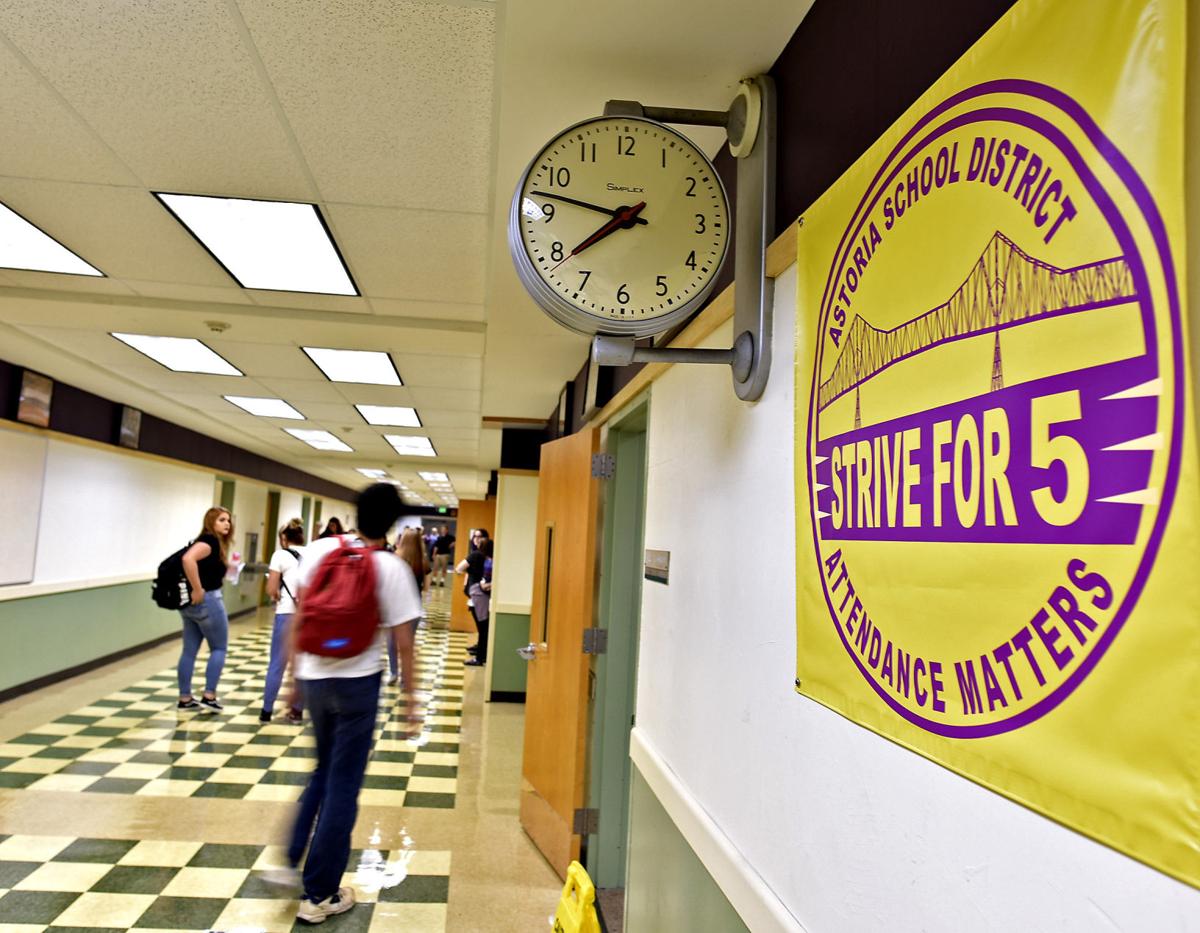 Students roam the halls of Astoria High School this morning looking for the first classroom of the day. 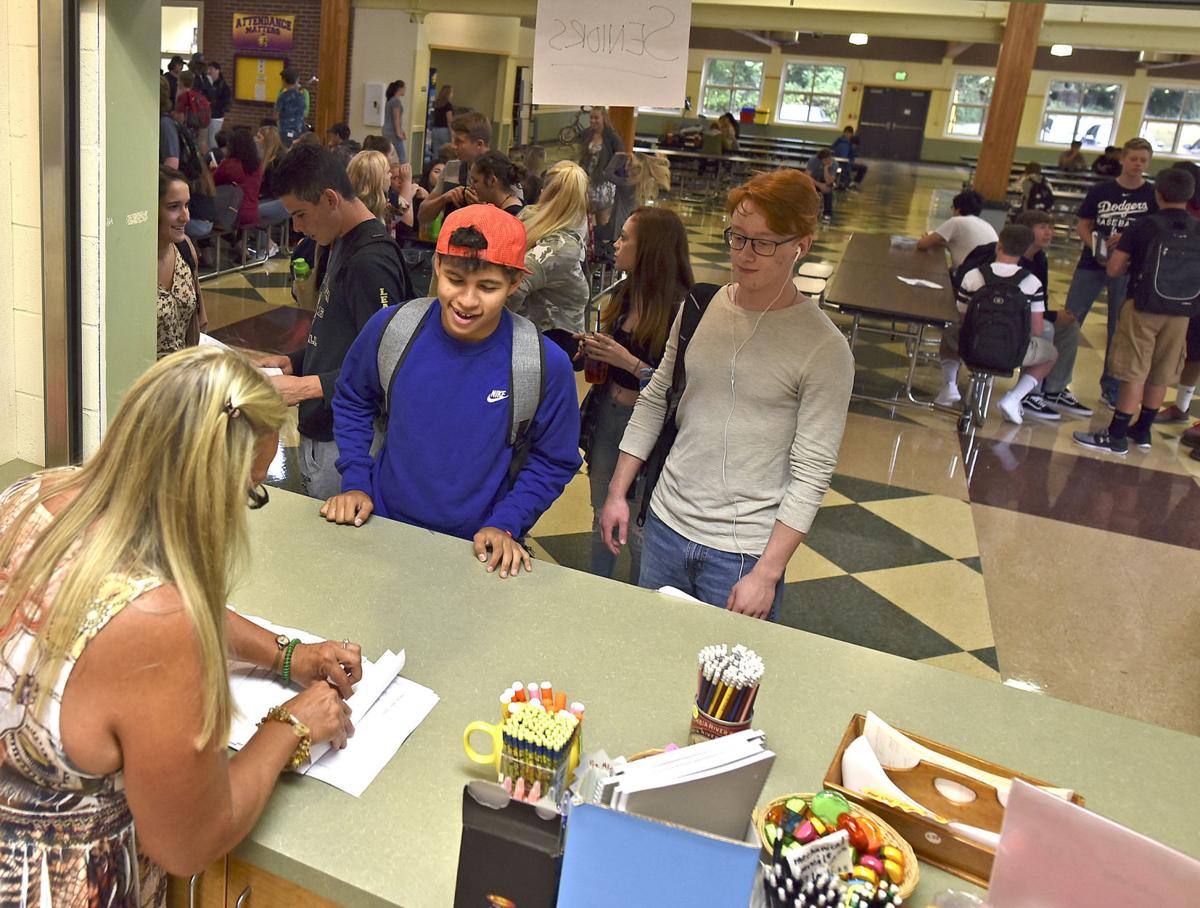 Students line up to see their schedules at Astoria High School before the first day of classes. 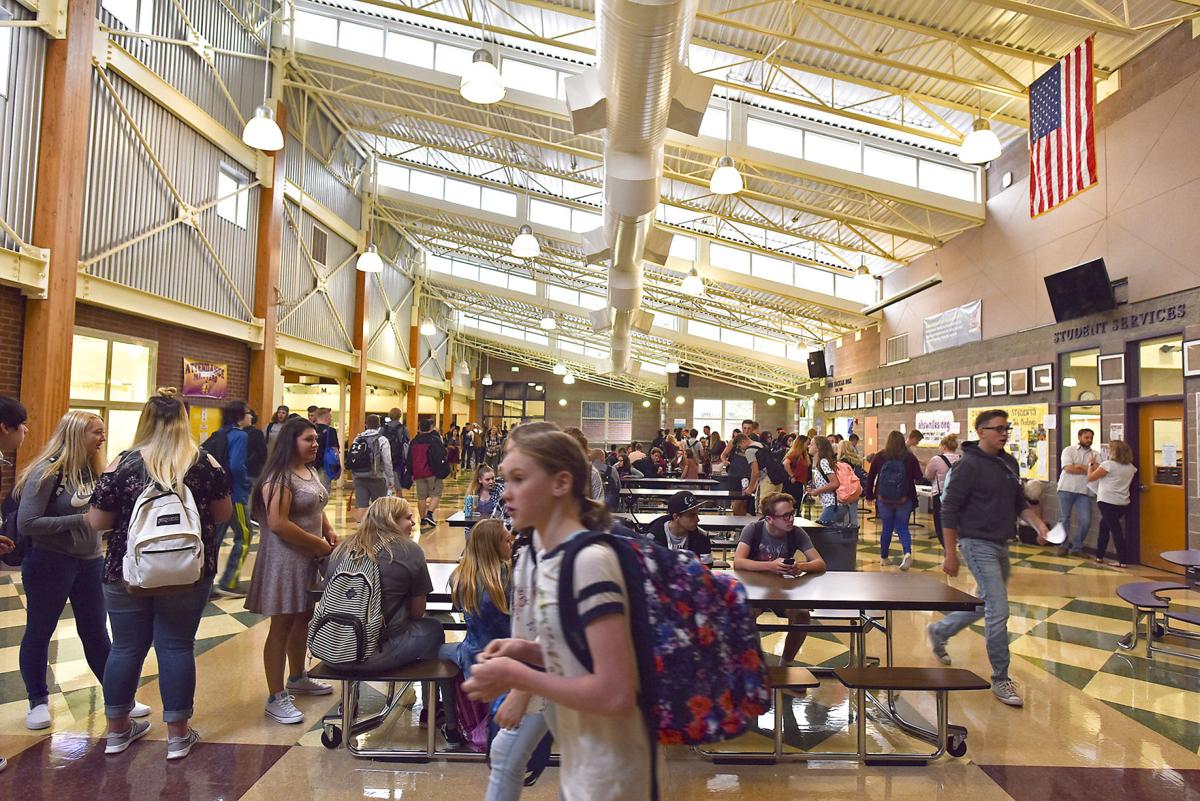 Hundreds of students attending Astoria High School gather in the cafeteria this morning before heading off to the first classes of the school year. 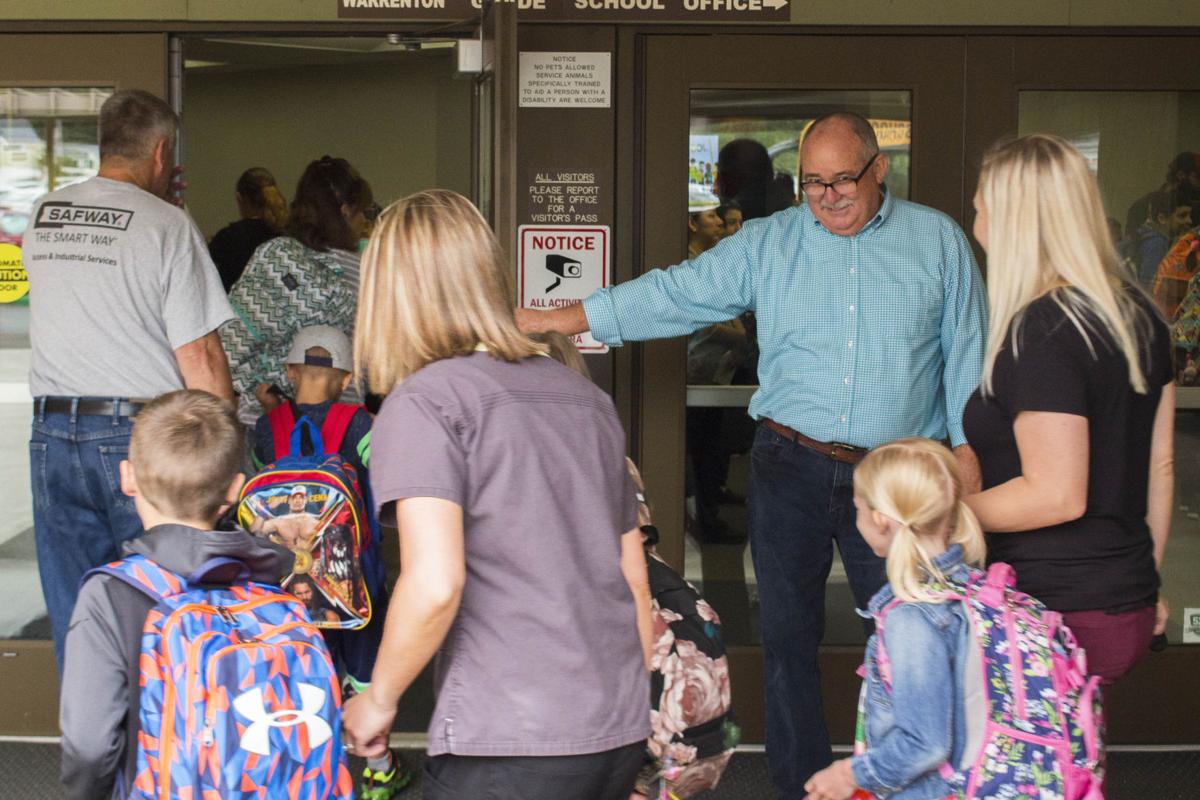 Students visit their lockers at Astoria High School this morning before heading off to the first class of the school year.

Students roam the halls of Astoria High School this morning looking for the first classroom of the day.

Students line up to see their schedules at Astoria High School before the first day of classes.

Hundreds of students attending Astoria High School gather in the cafeteria this morning before heading off to the first classes of the school year.

As students return to school, educators are searching for ways to combat absenteeism — a nagging issue that hamstrings learning and consistently places Oregon near the bottom nationally.

On average, more than one-fifth of students in Clatsop County were chronically absent in the 2015-16 school year, according to the most recent data from the state Department of Education.

Students are counted as chronically absent if they miss at least 10 percent of school days, out of 180 days in a given year. More than 100,000 students in Oregon fit the definition in the 2015-16 school year, including more than 1,000 in Clatsop County.

In the 2015-16 school year, 17.6 percent of students in the Astoria School District were chronically absent, along with 18.5 percent in Warrenton-Hammond, 26.7 percent in Seaside, 22.3 percent in Knappa and 24.5 percent in Jewell.

Across the board, chronic absenteeism started higher in preschool and kindergarten, lowered toward middle school as students became more independent of parents, and grew again in high school.

The University of Chicago Consortium on School Research found that 87 percent of freshmen in high school who missed four or fewer days of school per semester graduated. That rate dipped to 63 percent for students who missed between five and nine days, and 41 percent for those who missed 10 to 14 days.

When Melissa Linder, the Astoria School District’s curriculum director, looked at the state’s statistics for last year’s attendance, results at Astoria looked rosy, with only 8 percent of students chronically absent.

Despite several initiatives, attendance hasn’t significantly improved over the last several years, Superintendent Craig Hoppes said. This year, the district debuted Strive for Five, a goal for students to miss no more than a week of school the entire year.

“All we’re trying to do is just bring an awareness of attendance,” Hoppes said.

The school district is reaching out to parents, community organizations and local businesses to increase understanding around the importance of attendance.

As part of the campaign, the district will also survey students, staff and parents about their perceptions of school, the district’s priorities and why students miss time. The data will be sent to an educational consultant and used to create attendance plans.

Chronic absenteeism peaked at every high school in the county during junior and senior years. More than 28 percent of upperclassmen at Astoria High School were chronically absent, according to the state. That rate topped 30 percent at Warrenton High School and 40 percent at Seaside High School.

“It’s certainly a challenge, and we know that kids’ success is directly related to them being here,” Seaside Principal Jeff Roberts said.

“We have a pretty transient population, a lot of people in the service industry,” Roberts said. “When you have the turnover in the student body that we have, it’s difficult for students to have a connection with school.”

Last year, Seaside hired a part-time attendance supervisor to create connections with at-risk students who had not yet reached the definition of chronically absent. One of the most effective means to improve attendance has been to connect with kids and engage them through a variety of extracurricular activities, Roberts said.

“We need to improve our community’s mental health,” Astoria Principal Lynn Jackson said. “Our students, many of them have issues with depression or anxiety that make it difficult to attend.”

Roberts and Jackson both said they have shied away from using truancy officers, who can fine parents who allow children to be chronically absent, because the practice hasn’t been effective and doesn’t address the underlying reasons students don’t make it to school.

In November’s election, Oregon voters passed Measure 98, which approved $400 per high schooler to bolster collegiate academic and career-technical offerings, along with dropout prevention services. The measure was only half-funded by the state Legislature, but is helping school districts add more programs and support staff at the high school level.

Each district is investing in additional counseling as students transition into ninth grade, where academic success can determine graduation. The Chicago Consortium on School Research found that 93 percent of ninth-graders who averaged at least a grade of B go on to graduate. Freshmen with less than a C average were more likely to drop out than graduate.

Astoria High School is hiring a new social worker with Measure 98 funds to work with families who might face other obstacles in attending school, Jackson said.

Seaside will likely expand the presence of its attendance specialist, Roberts said.

Around town and on the radio, Astoria will continue to push the importance of attendance to the public.

“It’s a pretty easy fact that if kids go to school, they’re going to graduate,” Hoppes said. “We have enough supports in place.”

On GPS: How contact tracing could work in America

Zakaria: This is the 1 thing the US got right