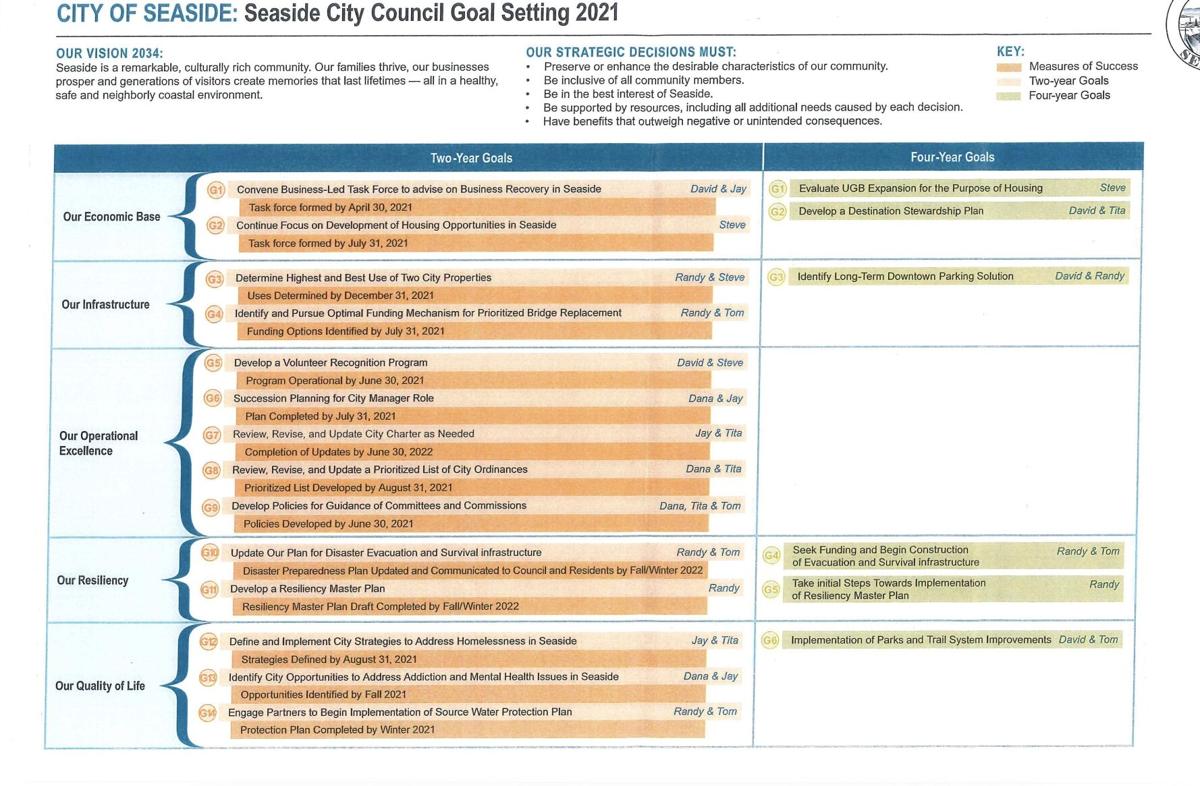 At a goal-setting session in January 2019, the city aimed to reestablish its community emergency response team, stream live meetings and work with the school district to bring a reservoir to the new campus. They helped accomplish all three. The CERT team is in operation and populated with volunteers, meetings are presented electronically on the city’s youtube channel, and the reservoir at the new campus are complete.

“Our feeling is, if you set goals, they need to be measured and accounted for,” Mayor Jay Barber said at the time.

Monday night the City Council presented this year’s goals list. Working with a consultant, the council met in January over a two-day period to project goals for the next two to four years.

Housing returned with a goal to continue focus on development of housing opportunities in Seaside.

That category has been expanded, City Councilor Steve Wright said, from a focus on workforce housing to include the “gamut of housing.”

The city will develop strategies to address homelessness as a way to improve quality of life in Seaside, and will seek opportunities to address addiction and mental health issues. “It’s so vastly needed,” City Councilor Dana Phillips said. “It’s not just the homeless.”

The list, which breaks down the vision to five categories: economic, infrastructure, operations, resiliency and quality of life. Resiliency, evacuation and bridge replacements are major long-term goals returning to the to-do list.

“The statistics when the next tsunami hits are variable, some are near term which means in less than a decade, so you don’t want to take this too lightly,” City Councilor Tom Horning, a geologist, said.

A resiliency master plan is moving along at a good pace, City Councilor Randy Frank said.

A communications tower will add redundancy to radio systems between the north and southern parts of the county.

Horning and Frank will team to guide completion and implementation of a source water protection plan to protect old growth forests. “An older forest will give up 50% more water in the summer than a young forest,” Horning said. “One of the things is how to accomplish this. It also enhances the forest for wildlife and salmon species in the river.”

Barber and City Councilor Dana Phillips will lead succession planning for City Manager Mark Winstanley, who announced his retirement in 2022.

Barber and Montero plan to update the City Charter as needed, a significant process that will require a vote by citizens. “Tita and I are looking at city ordinances, reviewing, revising and updating those city ordinances,” Barber said. “It’s a huge process. We’re also revising policies for committees and commissions, what they can and do.”

Montero asked councilors to provide regular updates. “I’d like to have a monthly regular report in, so we can keep all of us apprised, and our community toward what progress we are making,” she said.